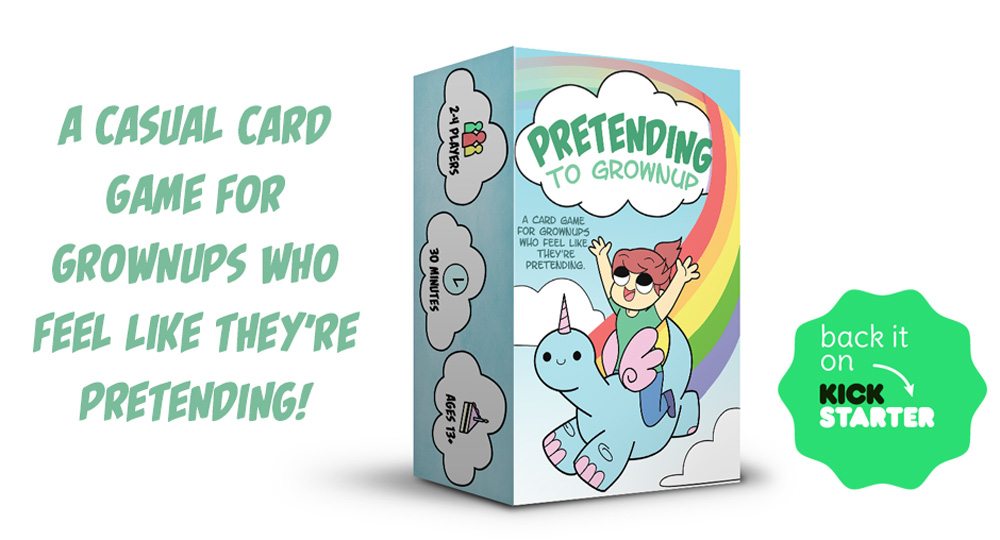 Jason Anarchy has just launched another new game on Kickstarter–Pretending to Grownup. It’s not only already funded, but all of the original stretch goals have been unlocked!

New to Kickstarter? Check out our crowdfunding primer and check here for more projects we love.

Anarchy has successfully created, funded, and delivered several hilarious and fun games now, and Pretending to Grownup promises to continue that tradition. 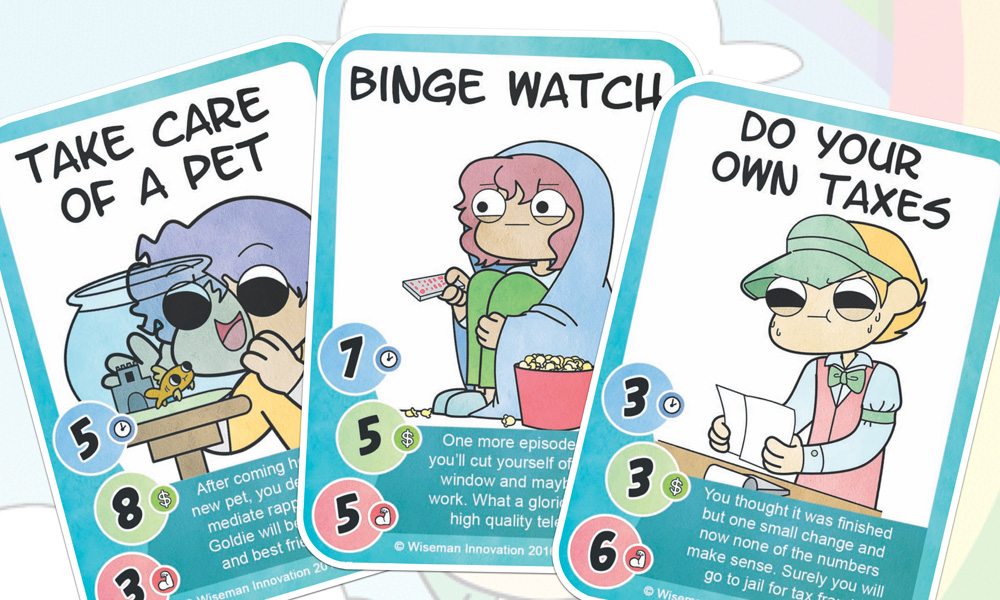 Pretending to Grownup is a casual game aimed at those of us who often feel like we’re just pretending to be grownups (imposter syndrome anyone?). The initial game comes with 100 cards all illustrated by Megan McKay of webcomic Doodle for Food. All of the unlocked stretch goals add an additional card from different artists (Imogen Quest, Fowl Language, and Rock Paper Cynic, just to name a few). A new set of stretch goals has been added since the first dozen got unlocked within hours. They include more cards from more artists as well as an upgraded card box, rule book, and a super secret mystery unlock.

The game itself is a casual, fun game for two to four players (up to eight if you combine two decks) ages thirteen and up. A game plays in about 30 minutes. This is a perfect game for people who don’t like heavy, intense games, and also as a palate cleanser between games on a long gaming night. Not only is the subject something just about everyone can relate to, it also features wonderful, delightful art. And Unipegasauruses. 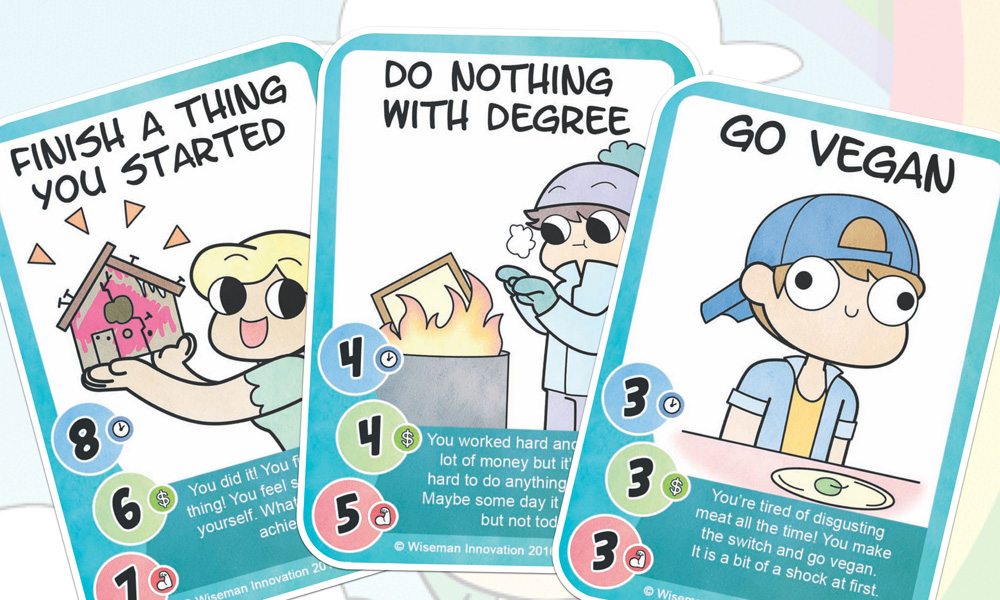 So how does the game actually play? It’s pretty straightforward. Each player gets three cards to start. 85 of the 100 cards feature a grownup responsibility and three scores for time, energy, and money. On her turn, a player can either “take on more responsibilities” by drawing two more cards or can challenge the player to her right to see who’s more grownup. In the event of a challenge, the player declares “I have more time,” “I have more energy,” or “I have more money.” The player to the right can decline the challenge or select a card to meet the challenge. If the player to the right does accept the challenge, the next player can also join in and so on around the table. This can result in a nice pot for the winner.

In a challenge, the player with the highest score on their card gets to keep all of the cards as points. Each card is worth a point, and the first player to twelve points wins the game. If the player to the right rejects the challenge, the active player gets to keep her single card as a point. This adds a nice bluffing mechanic to the game as well, as a player can potentially score with a low card if they are a good bluffer! 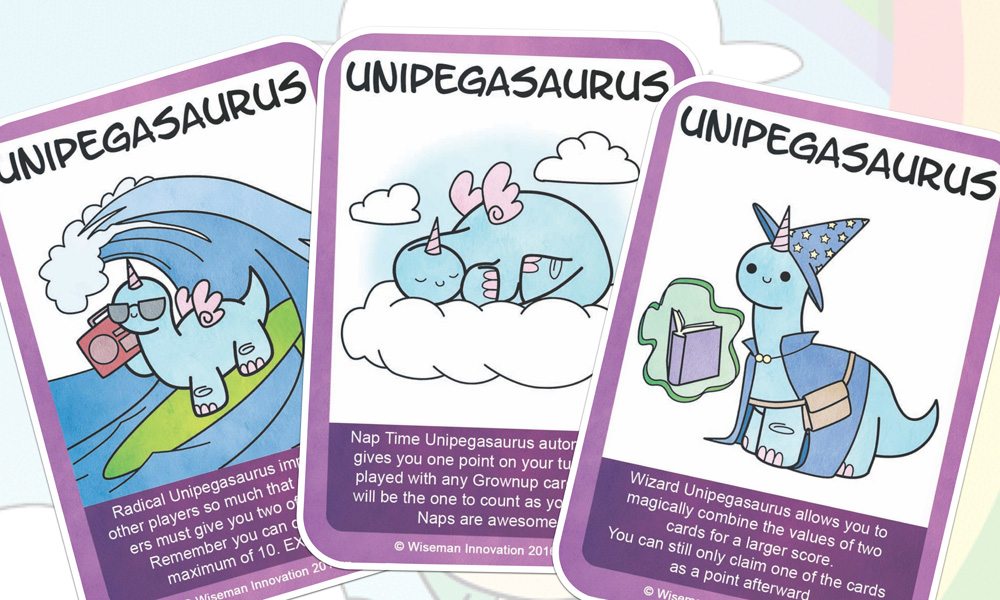 So what about the other 15 cards? Those are the Unipegasaurus cards! These cards represent using your imagination to skirt your grownup responsibilities by tweaking the rules of the game a bit.

You can get in on the campaign for just $8 for a digital print and play version. Upping your pledge to $20 will get you a full game (and all stretch goals) delivered to your door. Other tiers include multiple decks, as well as deals on Anarchy’s previous games (Drinking Quest: Journey Into Draught and Haiku Warrior, both games that I’ve covered here before). I can highly recommend any of Anarchy’s games, so if you haven’t yet gotten on board this train, now is a great time to snag all of his games at a great price.

How to Take Microphotographs