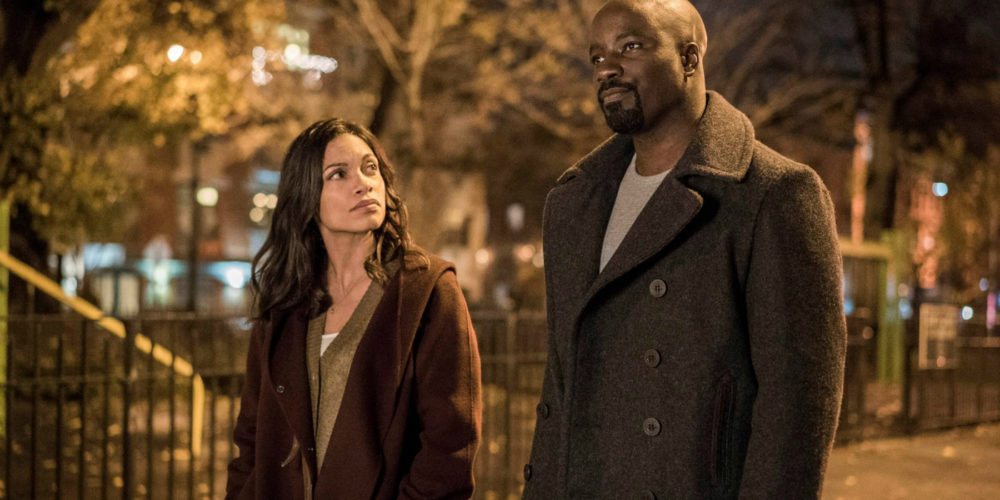 Many of you may not have heard of Night Nurse and that’s not surprising. She’s been around, in various incarnations and guises since the ’70s but has tended to work more behind the scenes than in the spotlight.

The good news is, she’s ultra-competent at her job and it’s likely she’s saved your favorite hero’s life once, if not several times. Though Claire hasn’t, as of episode 8 of Luke Cage (which is as far as I’ve gotten through the fault of my work schedule and life in general) officially taken on the title, a little birdy told me that, by the end of episode 13, she does have a new name for her super-secret business cards (not a spoiler as it doesn’t change her role in proceedings at all).

Since Night Nurse is around to stay, I figured she’d be a good candidate for Get to Know a Hero.

Before I delve, however, I’d like to state for the record: no self respecting nurse has worn a little white dress or a cape in a couple of decades. Also, no more hats.

As is often the case with super-lore there’s a bit of muddling in Linda Carter’s background: the Marvel wiki states she “graduated from medical school,” then became a registered nurse. Truth, folks, that simply isn’t something that would happen. Ever. Nurses aren’t doctors who couldn’t make it; nursing is a different job entirely, one people choose because that’s what they want to do. Could a nurse walk in one day and decide to do a physician’s job? Nope. But newsflash, a doctor couldn’t walk in and do a nurse’s job either. Trust me.

How did this soapbox get here?

Linda Carter began her nursing career at Metro-General in New York. During her time there, she demonstrated that not only was she a more than competent medical practitioner, she had useful investigative and detective skills. No, I don’t know where she learned them.

At some point in her career, Linda rescued one of New York’s vigilantes and realized how much they needed that sort of help. In order to repay the heroes for what they did for the city, Linda established a secret clinic in Chinatown where heroes in need could come for assistance without fear of unmasking or media attention. Over the years she has saved the lives of: Daredevil, Elektra, Spider-Man, Luke Cage, Doctor Strange, Captain America/Nomad, Firestar, and many others.

Christine Palmer left a debutante life to become a nurse, accepting a job at Metro-General after completing her training.

After practicing for several years, she left New York, taking a position as a private nurse for one Derek Porter, who turned out to be a total creep using his fake paralysis as an excuse to abuse an aunt’s goodwill and use her home as a base of operations for a drug smuggling ring. He tried to kill Christine when she discovered his secret. Apparently, the butler saved her (remember, I don’t make the news, I just report it).

After that debacle, Christine returned to New York where she met several of the X-Men and, like Linda Carter, became involved with providing medical care to the city’s superheroes.

Rachel McAdams, who plays a character named Christine Palmer in the upcoming Doctor Strange flick was initially rumored to be Night Nurse or a Night Nurse, at least. A little confusing considering Rosario Dawson’s role in the small screen Universe but not out of canon, as it were. IMDB initially (like, as of last week) did have McAdams listed as Christine Palmer/Night Nurse but I just checked again and the moniker has been removed from her credit for the film. Guess we’ll see.

Georgia chose to serve her community at large rather than the supers within it specifically. On her days off, she provides free medical care to the people for her old block.

Doctor Claire Temple worked at a clinic in New York City where she encountered Luke Cage, bringing him back to the clinic after an attack. The two became close and Luke cleared Claire’s name when she was falsely accused of murder. He often brought his friends and colleagues to her to be treated after battles.

Over the years, she has treated Spider-Man, Daredevil, Iron Fist, Harmony Young, Sam Wilson, and Joaquin Torres (the new Falcon to Wilson’s Cap), and others.

Rosario Dawson’s Claire Temple, like Linda Carter and Christine Palmer, was a nurse at Metro-General when first we met her. She saved Matt Murdock’s life after finding him injured in a dumpster as well as after his fight with Nobu. When Jessica Jones brought Luke Cage to Metro-General after being forced to shoot him, Claire assisted them as well. She was fired from her job after an incident at the hospital involving the Hand and returned to Harlem, where she once again encountered Luke. She’s announced her intention to help injured supers though hasn’t (as of episode 8 anyway, which is as far as I’ve gotten – I know, I know) said exactly how she intends to do so. I did notice her studying an anatomy book briefly a couple of episodes back which makes me think she’ll meld with Doctor Temple by becoming either a nurse practitioner or a physician, and with Linda Carter by opening a secret clinic.

As for whether or not she’ll interact with McAdams’ Christine Palmer or Doctor Strange, we shall have to wait and see.

Coming Attractions – Can Trailers Work For Books Too?