Superman leaves National City. None of the good guys on The Flash manage to kill anyone last week. Arrow becomes an afterschool special. Victor Garber sings! Lisa, Will, and Joey break down last week’s episodes of Supergirl, The Flash, Arrow, and Legends of Tomorrow… and start a pool on whether Wally West goes looking for Doctor Alchemy before the doctor pays Wally a call first. 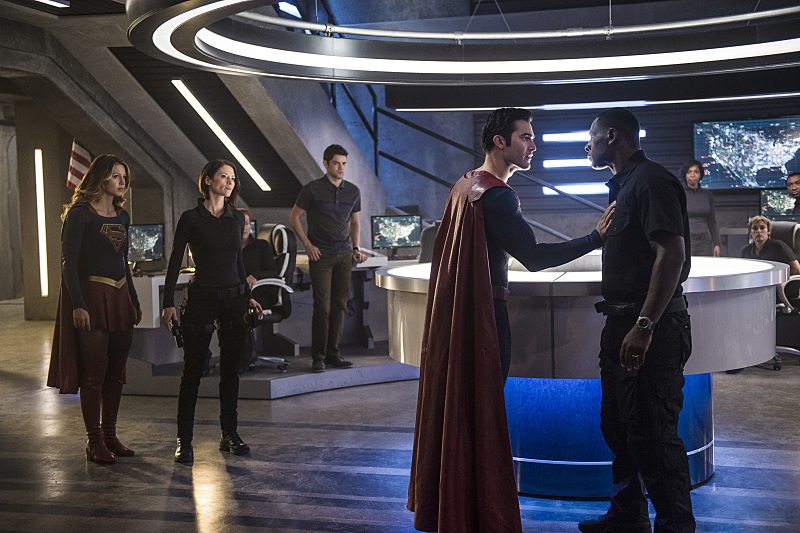 Lisa H: I know I have said it before but, I liked Supergirl last season. I thought it struggled with finding it’s voice, but I enjoyed it. It isn’t that I dislike it now, but having Superman show up is still not sitting well with me. So I for one was glad to see him go back to Metropolis at the end of the episode. I just worry he’ll overshadow her, because well, he’s Superman and he casts a big shadow without trying. I did really enjoy the Kara/Clark interaction. It is nice to see that relationship and I do think there are ways that the writers can incorporate it without Superman tag teaming it with Supergirl. I could get behind seeing him, in the midst of his life in Metropolis, calling or texting Kara, or making plans to see her, or even trying to schedule a non-super outing. I just don’t want to see so much with the Super Tag Team thing.

Will: I do like this version of Superman, but I too am glad he left the city and show for now. My biggest fear after the announcement was that he’d overshadow Kara or be her savior. I enjoyed their interaction as well, and the writers did a good job of not only not making Superman the savior, but having Kara save him a few times. I think if we only see him a few more times the whole season, it’ll be a perfect blend.

Lisa H: The big news to me in this week’s episode is Cat Grant’s departure from CatCo Media and Kara/Supergirl’s life. While not everyone will agree with this, I see Cat leaving in the same way I see the lack of parents in a Disney movie. Real character growth can not happen with a parent. Cat, for all her faults, is who Kara looks up to and seeks out when she wants advice. She is Kara’s role model.  Cat’s departure will mean that both Kara and Supergirl will have to figure it all out on their own.

All that being said, I absolutely loved the moment that Winn said,  “Superman and Martian Manhunter are going to fight. This is terrible. This is awesome.” I just love when the writers let Winn speak for the rest of us. I’d love to see him ask why everyone in the Berlantiverse discusses their secret identities in very public places. I mean does the word “secret” mean nothing to these people?! 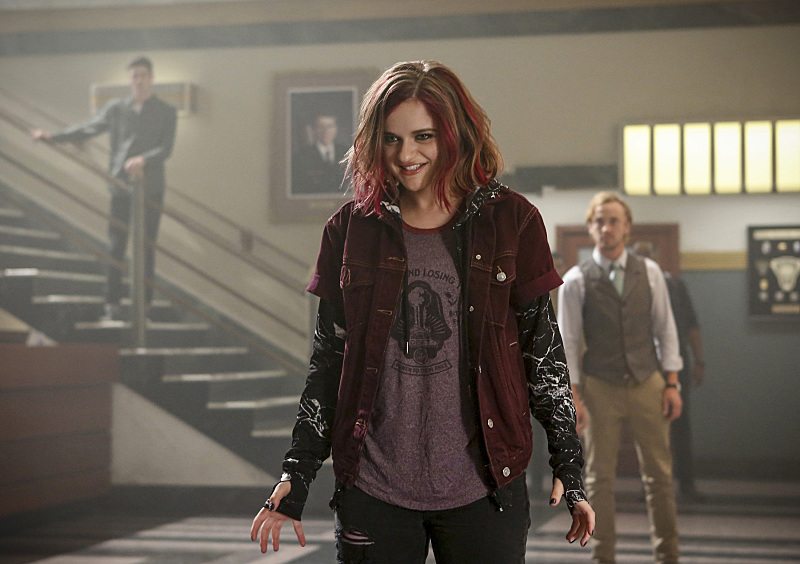 Joey: So, it’s obvious to everyone else that Wally is going to go looking for Alchemy in order to “get his powers”, right? Or, that Alchemy is coming looking for Wally. Wally mentioned to Jesse that he dreamt about having powers. That’s how it started for Frankie, and Clariss before her. Anyone taking bets on whether Wally goes looking for Alchemy before Alchemy starts calling to Wally first?

Lisa H: I got 5 bucks that says Wally’s going a huntin’ for Alchemy.

Will: Yup. He’s obviously having dreams about his powered self like the others, and he wants them badly enough that he’ll even go the Alchemy route to get them. The big question for me is whether or not Alchemy does something when giving powers that makes the person turn into a villain or if Wally can get the powers and still be a good guy.

Joey: In all seriousness, this is more of what I expect from the Flash as a hero. Use your powers to negate the threat, then use your empathy to negate the villain. I know you can’t do that with every villain of the week, but the Flash has gotten farther with villains like Magenta and Captain Cold by connecting with them as human beings first. Two weeks in a row where none of the good guys has killed anyone!

Lisa H: Yes! I feel like Barry finally had some character development and we can now all move forward. Hooray! I’m really enjoying watching Iris and Barry’s relationship grow. I give him two thumbs up on that last date idea, although he did kinda just leave Iris there when he ran off to fight Magenta. Was she supposed to call an Uber?

Will: What the heck? I didn’t recognize where he ran her too, but I assumed it was pretty far and then he just left her! He couldn’t have run her back with him and dropped her off on the way?! I do like that they are giving Iris more of a voice and making her a more compelling character.  My biggest outstanding question (other than who is Alchemy) is when is Katelyn going to share her powers with the team? After all of the “Cisco how could you keep it a secret?” I’m kind of surprised she decided to do the same. 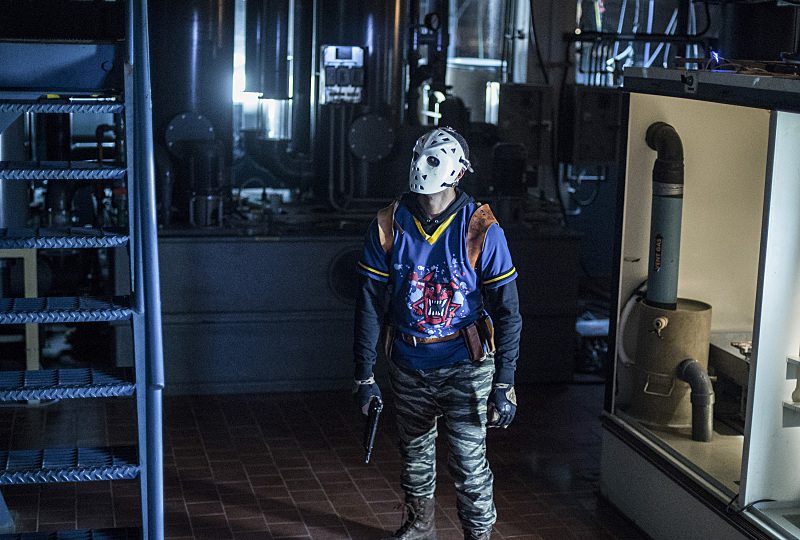 Joey: On a very special episode of Arrow, Ollie learns to trust. Trust his “brothers” in the Bratva flashbacks. Trust his office staff. Trust his new Team Arrow. I guess “molestation by old white men”, “teen pregnancy”, “just say no to drugs”, “the AIDS crisis”, and “Skippy’s death” have already been spoken for.

I’ve committed to sticking with Arrow through the crossover event in November, and I’m hoping I don’t regret that hour each week. Please, Arrow writers and producers, give me a reason to look forward to tuning in each week. Things like seeing Curtis in the Mister Terrific costume (and discussion about how awesome their outfits look in the field… or not, if you’re a hockey mask wearing vigilante). Give Paul Blackthorne more to do. Bring back John Barrowman (we know you’re going to do so at some point, so get him onscreen already). It’s the actors we enjoy seeing, not the convoluted scenarios of the past two-plus seasons.

Bonus points for working Floyd Lawton back, even if he was just the personification of Diggle’s guilt. 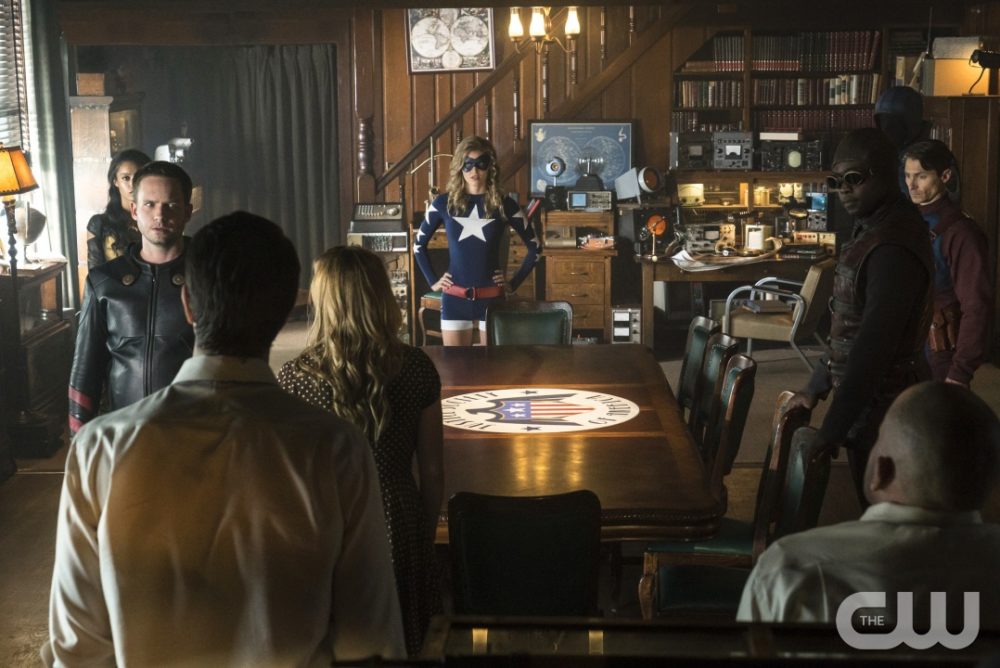 Legends of Tomorrow Episode 2.02, “The Justice Society of America”

Joey: The good? Gray making an Enchantment Under the Sea reference from Back to the Future. The bad? I don’t care enough about the JSA members to be in any way invested in the “shocking” death at the end of the episode. The ugly? The CGI on the hulked-out version of Baron Kraiger (should have renamed the character Baron Kringeworthy).

I know that this was an origin story type of episode. It served to set up Nate’s forthcoming turn as a hero, Vixen’s addition to the Waverider and her secret mission to suss out which “time traveler” killed her partner and stole the Askaran Amulet. Still, knowning all that did nothing to blunt the feeling that this episode felt like a step back from last week’s premier.

What was your favorite moment from last week’s episodes? What are you hoping to see this week? What do you hope to never see onscreen again (Baron Kraiger, perhaps)? Let us know in the comments below! 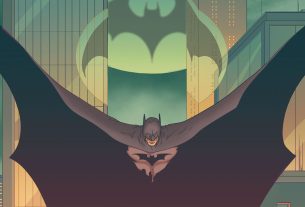 A Google-a-Day Puzzle for August 29

Spooky Apples — In Which Suzanne Has an Obsessive Mommy Moment