Before there was a Harry Potter, there was Chance Falconer. Smart, fearless, resourceful, Chance is exactly the girl hero that young readers and their parents are eagerly seeking today, and yet very few people know she exists. How Scholastic hasn’t snapped up Leave it to Chance is a mystery to me, but now that the 20th anniversary of the series’ debut is upon us, it’s long past time to sing her praises and see if anyone notices.

In 1996, my eldest daughter was almost 10 years old. She’d gotten into comics a couple of years earlier through DC Comics’ Batman Adventures series, based on the iconic animated TV series. Issue number 8 had featured Batgirl, and the revelation that girls could be heroes sparked more interest. She soon discovered, to her quite vocal disgust, that most ’90s superheroines were, in her words, stupid. They ran around trying to fight in strapless tops, butt-floss thongs and insane high heel shoes that nobody could run or fight in. The pickings were slim. Apart from the then-recent reboot of the Legion of Superheroes, there were very few women in the comics pages that Ashley admired and wanted to read about. And then came Leave it to Chance.

James Robinson, then at the top of his popularity due to his writing of the acclaimed Starman series, teamed up with X-Men fan-favorite artist Paul Smith to create a new world where magic is not only real, it’s commonplace; in this world, the evening news regularly includes accounts of mystical events the way our news reports the weather and traffic. In the quietly spooky town of Devil’s Echo, the people depend on acclaimed sorcerer Lucas Falconer to protect them from malignant forces. Since time immemorial, a Falconer has protected Devil’s Echo, but now (at least in Lucas’ mind) there’s a problem: Lucas’ wife was murdered by the evil wizard Belloc in an attack that left Lucas disfigured, and his only child is a girl.

Naturally, since Chance has reached her 14th birthday, the age at which Falconers traditionally begin their training, she is excited to prepare for her future role, but Lucas has other ideas; he wants her to grow up, get married, have a son, and let him be the next protector. Chance, being a true Falconer, decides to take matters into her own hands and jumps into one supernatural crisis after another, substituting courage and intelligence for the training she lacks. 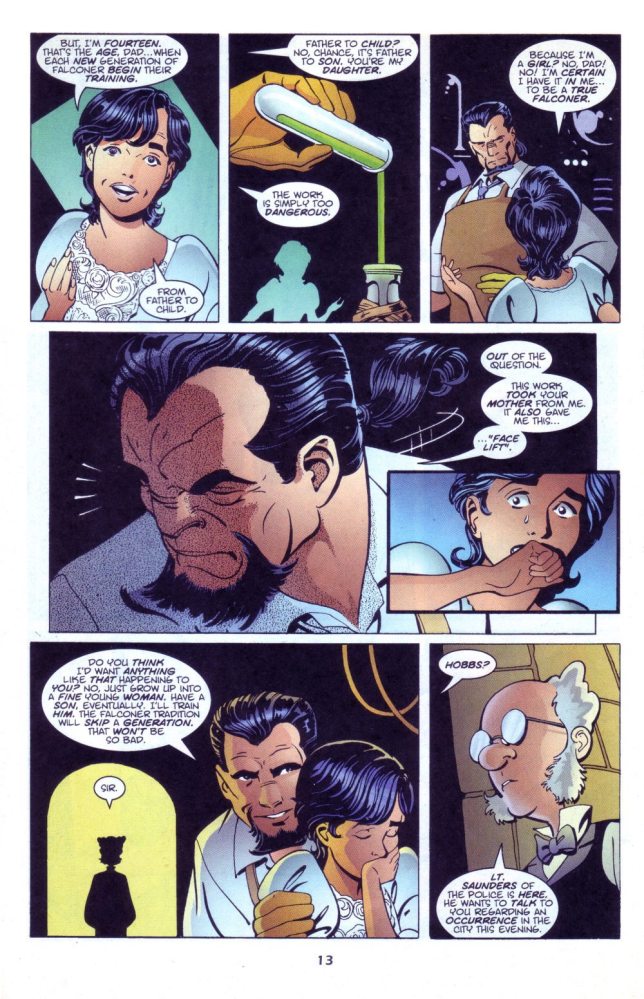 In the first story arc, Chance rescues an extra-dimensional baby dragon, a Native American shaman and his daughter, and the entire city, when the Horned Toad God arises to destroy it. In the second, she prevents a boy’s pet monkey from being sacrificed in an arcane ritual, an adventure that results in her being packed off to boarding school “for her own protection.” There, she gathers her own “Scooby Gang” of fellow students and, in true Scooby-Doo fashion, faces down a pirate’s ghost searching for his lost treasure on the school grounds; but since this is Devil’s Echo, the ghost might be real. Further adventures include a quartet of movie monsters stepping off the screen to wreak havoc, a zombie hockey player, and a young thief with romantic notions about our heroine.

After 11 issues under the Homage Comics imprint at Image, issue #12 was published by DC comics in 1999, wherein Chance uses a potion given to her father by Lewis Carroll to shrink to fairy size and assist in a war in her garden. Two years later, Chance returned to Image for issue #13, a double-size issue intended to restart the series, ending on a cliffhanger. The story has never been completed.

My children enjoyed Chance, and recently my son, now age 26, shared it with his girlfriend. She told me “I loved it and am heartbroken that it ends the way it does.”

This book actually altered my parenting. I had always leaned a bit toward the “free-range” side and looked askance at helicopter parents, but Chance took it a step further, with one panel in particular catching my attention. In the scene, a magically produced storm is creating massive flooding, and Chance learns that a colony of sewer goblins are going to drown. (Devil’s Echo has a thriving sewer goblin population, because of course it does.) Chance knows she’s the only one who can help, but as she heads for the door, she is stopped by Quince, the housemaid, who tells her to go to her room and “be good.” Here’s Chance’s reply. 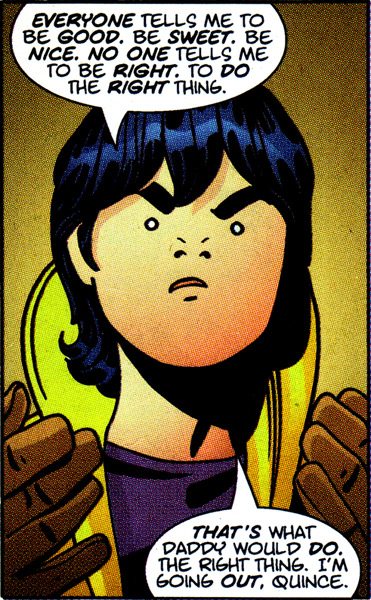 From that day to this, I have never told my kids to be good, sweet, or nice. I have often told them to be right. This page, along with Spider-Man’s “with great power…” and Green Lantern’s Oath, is baked into my parenting philosophy. Be right. Do right. Thanks for the tip, Chance. I’m sure my kids appreciate the trust you encouraged me to have in them. 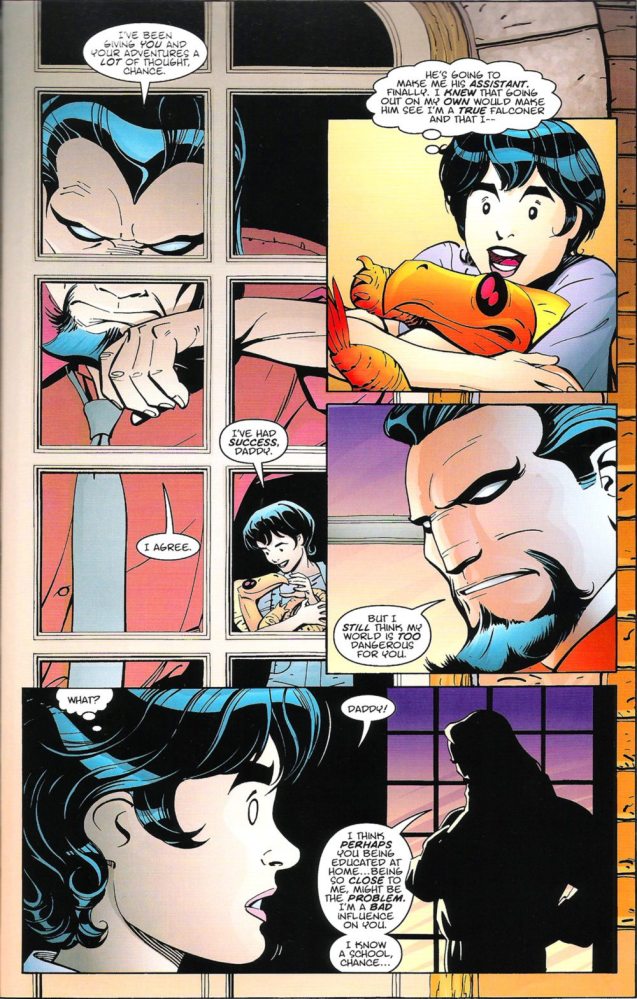 Some years ago, I asked Paul Smith about the possibility of reviving the multiple-Eisner-winning series. His response was essentially “I’m skinny, but I do need to eat sometimes.” He was talking about the simple fact that the reason the book ended was that it didn’t sell.

As Ridley Scott once said, “Being ahead of your time is just as bad if not worse as being behind the times.” When Chance made her debut, Harry Potter was still several months in the future and wouldn’t become a global sensation for at least a year. There was no popular thirst for plucky tweens having mystical adventures, and outside of manga there were no really prominent female characters carrying their own title except Wonder Woman, and she had seen better days at that point. There was virtually no market for “girl comics,” other than the ubiquitous Betty & Veronica; Lumberjanes, Gotham Academy, and Squirrel Girl were far in the future, and about the only people who ever set foot in a comic shop in those days were guys who had been buying comics for years, and the only ones who bought Chance were the ones with daughters. Because the comic was principally sold in places where girls seldom went, there was little opportunity to get it into the hands of its target audience. Leave it to Chance became, in the words of fellow GeekDad Mordechai Luchins, “a really cool idea that ended up not going anywhere and was allowed to die.” Despite critical acclaim, Leave it to Chance sat on the shelves, while the kids who would have loved it remained oblivious to its existence.

The bright side is that all those unsold copies are now up on Amazon for the plucking, both the original comics and as collected books in both paperback and hardback formats. The hardback editions are oversized and beautiful, reprinting issues 1-11 in three volumes. For issues 12 and 13, you’ll need to buy the original issues, since they’ve never been reprinted.

When I realized that the 20th anniversary was approaching (the first issue is cover-dated September, the copyright notice says October, so we’ll split the difference), I emailed Smith and asked for an interview. He replied, “Thanks for the opportunity but I’m with Ditko and Harper Lee. I have no interest in interviews.”

I then reached out to Robinson at the only point of contact I knew of, Twitter. His response was “Err, I wish I could have done more. Unfortunately @paulsmithdraws doesn’t return calls. Oh well, Happy 20th, Chance. You were fun.”

I asked Image founder Erik Larsen (via Facebook) if the company was planning to do anything to acknowledge the anniversary. He said that in order to do that, the comic’s creator-owners would have to want to do something, and stated that Image would be happy to publish it if they did.

So, James and Paul, if you see this, I hope you decide to revisit the most underappreciated and unjustly neglected comic of the ’90s. (We have Kickstarter and GoFundMe now!) I hope Scholastic figures out it would fit very nicely on the shelf between Harry Potter and Bone, or that Harper-Collins or another major publisher recognizes the value of the series, and I hope Netflix realizes that it would make a fabulous companion to Stranger Things, perhaps as an animated feature aimed at the girls (and boys) aged 9–12 for whom it was created. Chance Falconer and her world are just too good and fun to be discarded and forgotten. Maybe if Hollywood waved some money at it we could get a second run, and maybe even a conclusion to that cliffhanger.