Gabriel Bá and Fabio Moon have created some truly great artwork, as this comic will show you.

Neil Gaiman’s How to Talk to Girls at Parties, originally a short story (first appearing in his book Fragile Things), depicts two teenage friends who decide to crash a party. The party is full of girls, but they are not what they expected.
Some of my favorite Gaiman topics abound here: the eerie distance between what you hear and what you are being told, the possibilities hidden behind each particular girl, and the true awkwardness and eagerness one of the boys feels—all of these things shine naturally in Moon & Bá’s work. They are all there.

The girls depicted are both beautiful and perfect looking, and Gaiman’s words adapt very well to these twins’ artwork. How to Talk to Girls at Parties; was nominated for the 2007 Hugo Award for Best Short Story and won the Locus Award for Best Short Story that same year. It wouldn’t surprise me if this comic book would get nominated as well, and now I would tell you why.

These guys rock, that’s why.

Both twin brothers where born and continue to live in São Paulo, Brazil. They have drawn together since they were kids, and have been around producing great pieces of artwork for mainstream comics for the last twelve years, at the very least. Their work on Umbrella Academy won them one of their first Eisner Awards, and my favorite work of theirs, Daytripper, garnered them Eisner, Harvey, and Eagle awards in 2010.

Daytripper‘s story follows the life of Brás de Olivia Domingos, the son of a famous Brazilian author. Living in his father′s shadow, he dreams of becoming a famous author himself. Brás writes obituaries as a job, describing each person’s ending with both compassion and love. Strangely enough, each moment in his own life will be described as an obituary at each turning point.

The book gets you wondering, not about death, but about life: what if each accident, each important moment of your life, had become an end and not just a chapter? Who would you be? Looking back, what would you become? 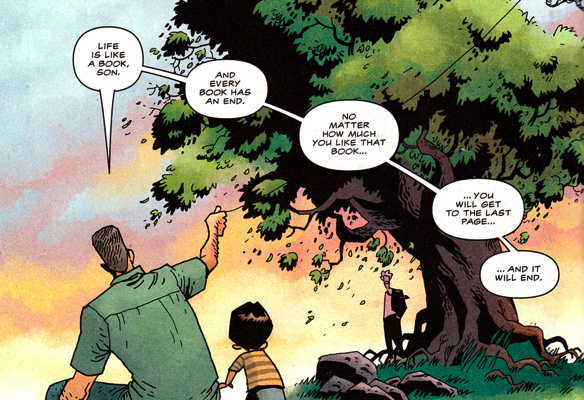 Daytripper is both an homage to their homeland and to Brazilian culture, and an homage to the famous Beatles’ song: it plays with the unexpected, the finishes that are not there, and the ending that truly will be the last. It is a work of beauty, and, amazingly, it shows how well both brothers work together.

Another definitely great story of theirs is B.P.R.D.: Vampire, a five issue comic, scripted and illustrated by Bá and Moon themselves, under the auspices of Hellboy creator Mike Mignola. Creepy, haunting, and beautiful, this work is something to watch out for.

If you see their names on a comic book cover, just grab it. You can always trust them to have a good time. Their newest book is called Two Brothers, and features a couple of twins as the main characters. As you can imagine, I can’t wait to read that one as well.

Six Months With An eBook Reader: Yeah or Meh?