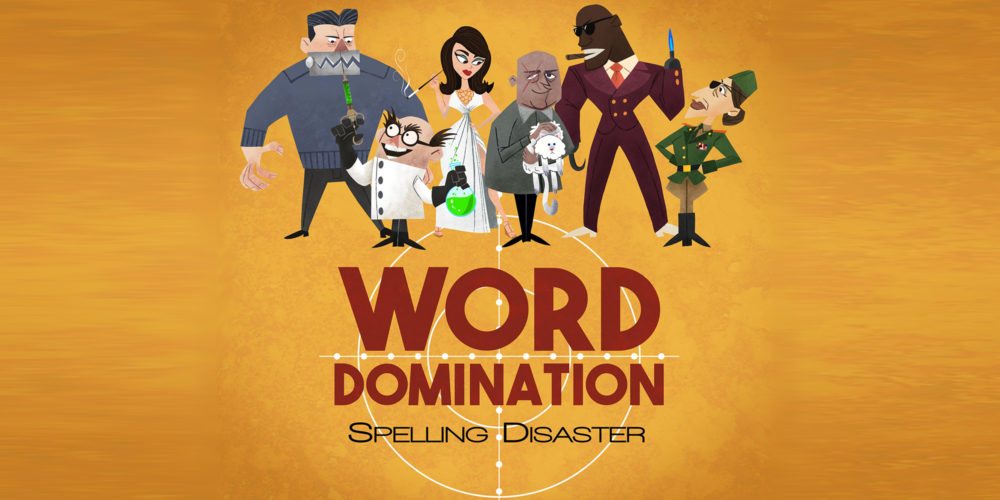 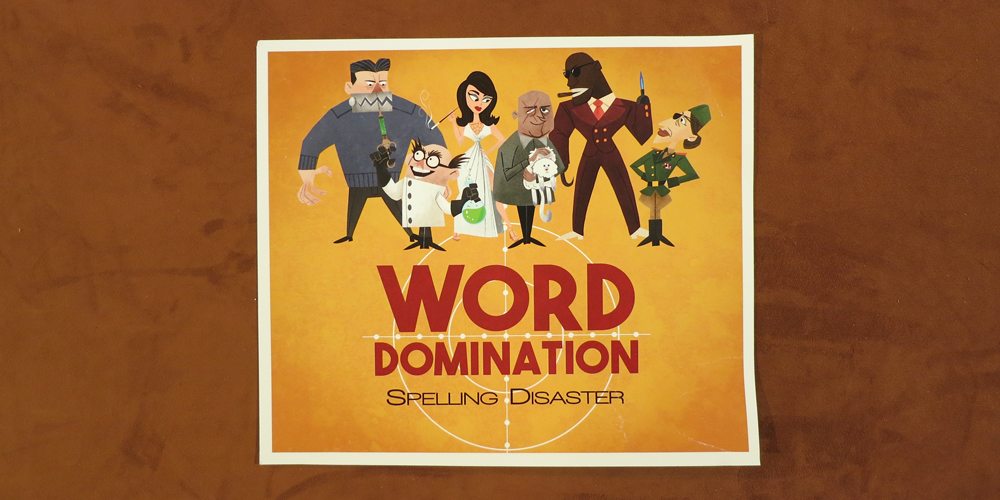 In a game, is there anything better than playing the part of a sinister genius who’s trying to steal the world’s treasures? Well, if you said “No, unless you could integrate the theme with a word game,” you’re in luck. Word Domination, a strategy-based word game launches on Kickstarter today and there are an evil underground lair’s worth of reasons why you should be interested in this game …

Called “the sister-game” to Tim Fowers’ fantastic and plenty popular Paperback, Word Domination is an area control meets word game and is the first title from designer Jeff Beck. This 2-4 player game, which plays in 30-60 minutes, is unlike any game you’ve played before — and it’s pretty awesome. You pick letters on the board to spell words. If you can use the same letters on a subsequent turn, you can steal them. However, your opponents are trying to steal the same letters (and artifacts) and, if you’re lucky, there are special weapons that will make their evil plans a bit more difficult. 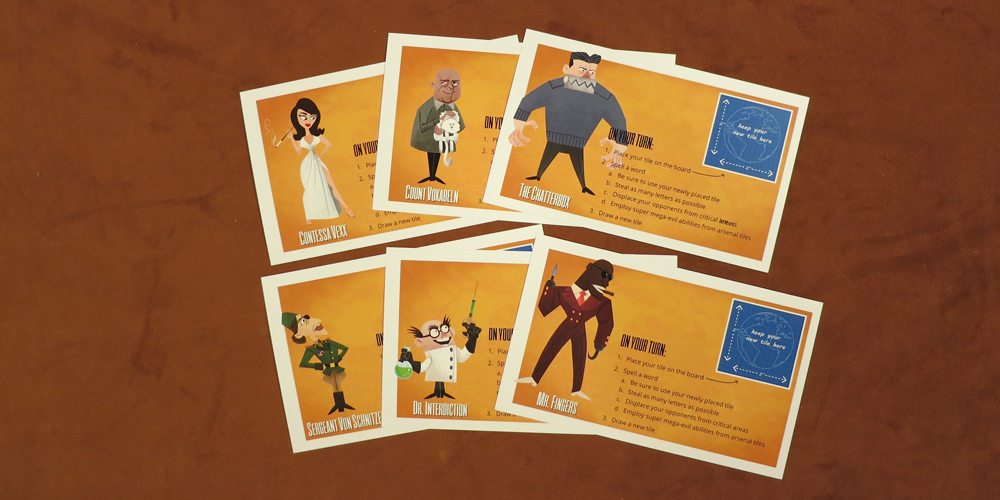 This review is based on a prototype, so the parts will change before final production. However, in broad strokes, each copy of Word Domination will ship with 105 tiles, each one unique. For example, in the game there are four tiles with the letter C on them, but each has a different “priceless artifact,” as the game calls them — Capitol Hill, the Colosseum, Crown Jewels, and Chichen Itza. Each player gets 30 cubes for scoring and tracking words spelled. There’s a D6 for a turn counter and, additionally, there are six player cards, which help with turn actions and provide a place for your cubes and current tile. On the back of the cards, there are definitions that explain special tile abilities. The player cards and character art will look a little familiar because they were created by Ryan Goldsberry, who illustrated Tim Fowers’ Paperback and Burgle Bros.; Fowers is also involved in this project, as a consultant. The tiles all have wonderful art of the artifact’s blueprints and were illustrated by Beck’s brother, Andrew Beck.

Watch a video of the basics, read the complete rules, or read on.

Tiles are drawn randomly and placed in a grid, the size of which is determined by the number of players. Each player chooses a character card, all the cubes from one of four colors, and draws one additional tile, which is placed on the character card.

On your turn, you place your tile next to the existing board. You then spell a word, which must include your just-placed tile’s letter. When spelling, letters don’t need to be adjacent to each other. Letters may only be used once in a turn. As you spell your word, place a cube on each of the letters you use. Only dictionary words are allowed — no proper nouns, abbreviations, or acronyms — and a word may not be repeated over the course of a game. Once you’ve spelled a word, you draw your next tile, place it on your character sheet and play moves on to the next player.

Some tiles are a lighter color than the others these are Super Mega-Evil Arsenal tiles, which provide players with a special ability when that letter is used in a word. The abilities are powerful, so it makes sense that the letters that make up the Arsenal tiles are infrequently appearing letters like Q, X, Z, and five others.

When your opponent spells a word, she can push your cube off a tile and return it to you if she uses the same letter tile you did previously. If she places a cube on a tile where she already had a cube, she steals the tile and it becomes hers for the rest of the game — no one else can use it. The stolen tile is replaced with the next tile on the draw stack, placed face down, so the card’s back, which reads “stolen,” can be seen. Arsenal tiles are like Artifacts and can be stolen and only used by their owner.

There are a couple of additional rules that allow you to help a struggling player (or give yourself an advantage while assisting a competitor) and another that forces someone who is taking too long per turn. If offers have been made and refused and the player still hasn’t spelled a word, you can force him to spell within 60 seconds or lose his turn. Hey, Word Domination is serious business!

Play continues through six rounds, at which point the cops show up and end the nefarious wrongdoings. All evil geniuses retreat to their lairs and add up their points. Letters that have not been stolen are worth nothing, each stolen letter is worth one point to a player, but if they have a connecting group of 3 or more stolen letters (diagonal connections don’t count), each stolen tile is worth two points. The caveat is that a non-stolen letter that has your color token on it can act as a bridge to connect groups of your stolen tiles. Most points, wins.

Word Domination is a game that is extremely fun to play. It looks great and, because it’s a tile-laying game, it’s different every single time. Unlike other word games, you don’t have to be a lexiphile to be competitive. When my wife and I played with our kids, their words weren’t as complex as ours, but the kids were able to group together stolen letters and remain close in the scoring on a consistent basis, making for a pretty balanced experience.

I got really excited about this game at Gen Con, after stopping by the booth and playing a couple of rounds. I immediately found two huge words on the board we were playing and was feeling pretty smart and good about myself. However, I was afraid that after I returned home, I would discover it was a fluke, attributable to the way the board was set up at the con and I’d only be able to find three-letter words like “cat” and “dog” in the comfort of my home. (Upside: I could be humiliated in private.) Nevertheless, my worries were unfounded. Obviously, a large board in a four-player game is going to give you more tiles for options, but even on a two-player board, the words come pretty easily.

I think a lot of word games tend to be gateway games, because we all have vocabularies, so we all are familiar with a good chunk of the game already. What makes Word Domination a game that works for both new gamers and folks who’ve got stacks of games in multiple closets is that it’s easy to pick up, but the powers and scoring give it an added twist that really give the game some added enjoyment. Plus, staring at the board and suddenly discovering a seven letter word that not only kicks your opponents from two letters, but scores a clump of three for you is jump-up-and-do-a-victory-dance exhilarating. Part of its appeal is that, unlike some other word games, you’re not forced to think about spelling and how to score points. Sure, you’ve got to track the tiles you’re trying to steal while preventing opponents from doing the same, but beyond that, you’re free to just spell. And when you do that, words appear a lot easier.

Speaking of larceny, being able to steal letters to add to your own reserve is an interesting twist and one that will likely affect your strategy in games of Word Domination. Not only will you want to steal for your own points, but you’ll have to keep an eye on opponents to prevent them from stealing — especially in groups!

I love the way the that infrequently-used letters become powerful weapons, encouraging you to get creative with your vocabulary. Word Domination is a game that leaves you feeling like a genius for discovering huge words hidden in the tiles. The evil part is up to you. The game has already won an award, the Northwest LUCI, a competition for game design in one of the most highly populated areas for game designers these days. Word Domination begins its Kickstarter today and should ship in early 2017.

Disclosure: Geekdad was sent a prototype of this game for review purposes. Game pieces and rules likely to change. 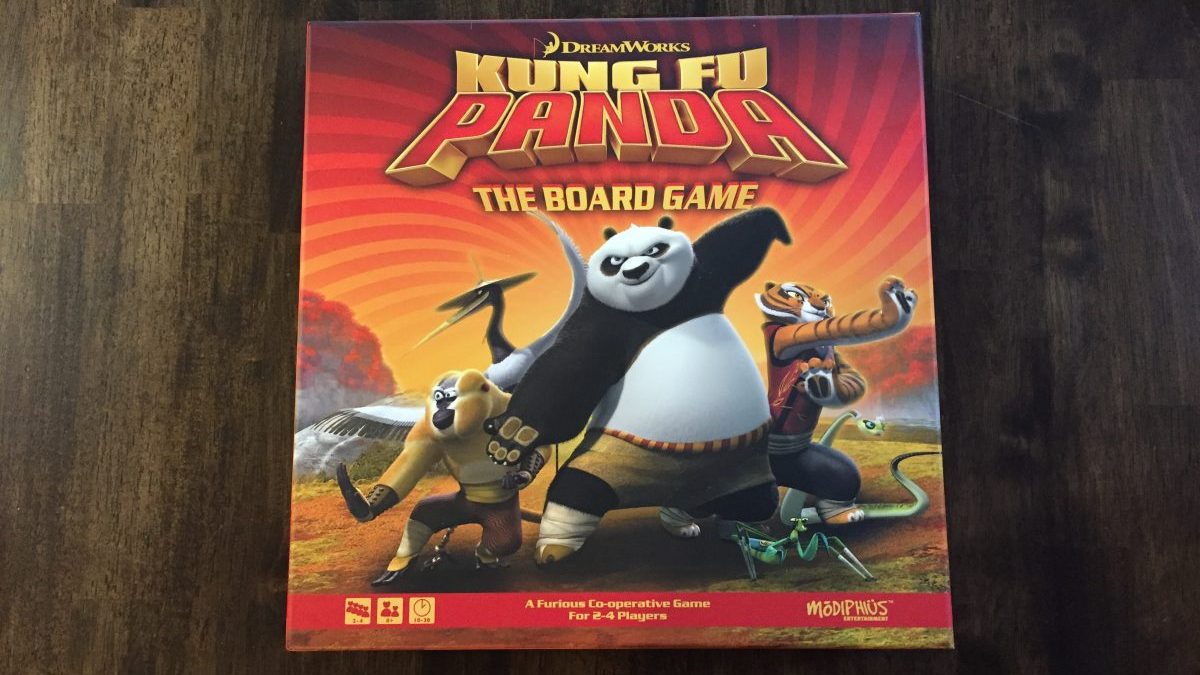 Roll with the Punches and Kicks in ‘Kung Fu Panda: The Board Game’

Zombie Dice For The iPhone Feels Like A Low Roll