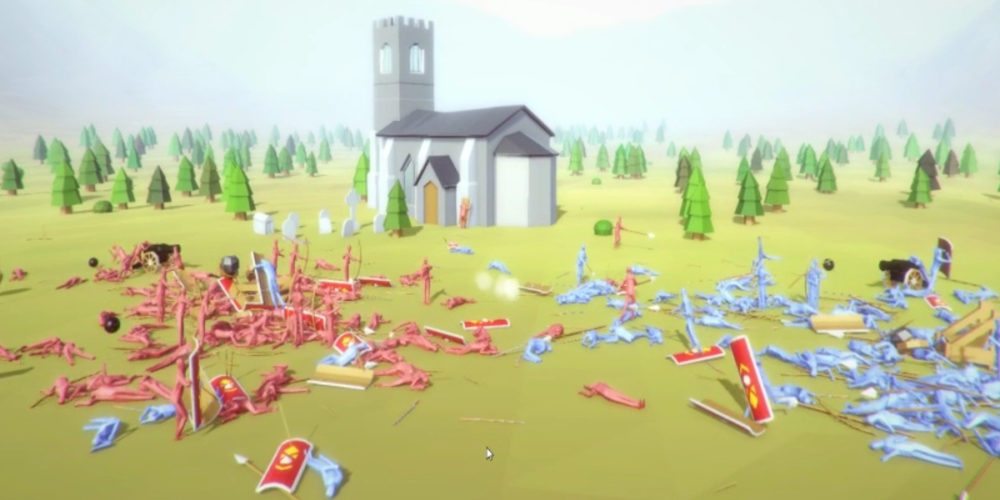 I expect the team at Landfall Games aren’t worried; Totally Accurate Battle Simulator (TABS) is tactical conflict with a comedic twist. Your soldiers careen around the battlefield with their adorably maniacal googly eyes, screaming, stabbing, and tripping over everything in sight. It’s the most fun you can have watching medieval troops bash on each other short of spiking the mead at a renaissance fair.

Currently in pre-alpha, developer Petter Henricksson sent me a code to check it out, and I’m glad he did. Though there’s clearly a lot of work to be done, TABS is already a blast, and has been making the rounds with streamers. Most of my time so far has been spent in sandbox mode, where you can create armies of varying compositions and have them engage in battle. There’s a wide range of units available to pick from, each with their own unique abilities and cost. Click play, and they’re out on the field. Archers fire quickly for low damage; spearmen can reach out at a distance, catapults fling rocks across the field, and chariots swing around wildly, crushing everyone in their path.

The game’s action reminds me of mobile physics-based games: there are rules underneath the hood, clearly, but they fall into the uncanny valley of real-world physics with hilarious results. Soldiers get their weapons stuck in one another, and are then dragged around the battlefield. Explosions blast bodies into the sky, and sometimes they manage to land on their feet. For some real fun, try setting up a cannon in front of peasants lined up like bowling pins. And when soldiers succumb to their injuries, they’re left with XX marks for their eyes. You don’t play a round without laughing at the outcome.

The TABS pre-alpha has a campaign of ten enemy formations you must defeat with a set unit count and money cap. Trying to find the right force to counter the opposition was a fun experiment for me and my daughter as we sent hundreds of the buffoons to their doom. Our favorite weapon was the hwacha, a device I had never heard of existing until playing Totally Accurate Battle Simulator. Entertaining and educational! The final boss, a perfect capstone for the pre-alpha, lays chickens as he walks around the battlefield, which then hunt down and attack your troops. My daughter and I laughed hysterically at the insanity of it all as our footmen fell to his fowl attack.

Henricksson tells me that as they continue work on TABS they’ll add more control over the troop AI and physics, but the silliness will remain, and that’s a great thing. There’s no release date for TABS at this point as Landfall Games are working hard to complete Clustertruck. While you’re waiting, go sign up for your chance to test out the game when the full alpha is available!

A Google-a-Day Puzzle for July 20