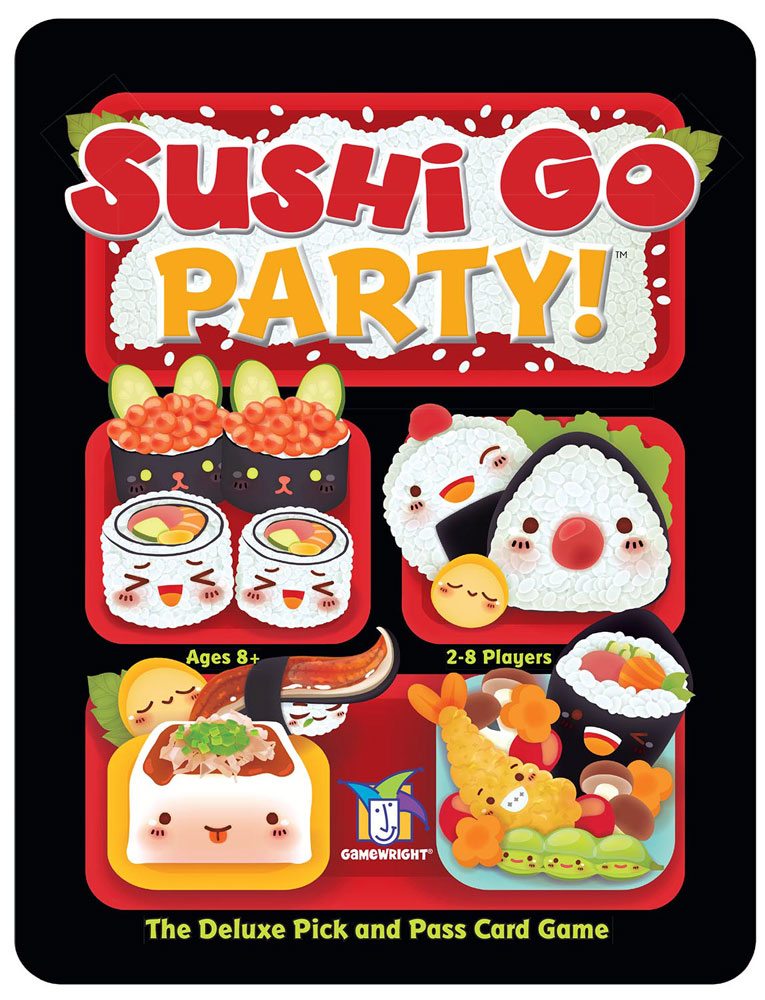 Sushi Go, the pick-and-pass card game, got an update this year: Sushi Go Party! This bigger box includes more card types, a board with a scoring track, and enough cards for up to 8 people to play at once.

At a glance: Sushi Go Party! is a game from Gamewright for 2 to 8 players, ages 8 and up, and takes about 30 minutes to play. It retails for $21.99 and is available directly from Gamewright, from Amazon, or at your local game store. The game is family-friendly and cute, but don’t be fooled—it’s also quite fun for adults. The primary mechanic is card-drafting, where you pick a card from your hand and then pass the rest of your hand to the next player. The theme is that you’re all at a sushi-go-round, so the hands of cards get passed around and around, and each round you’ll get to grab one thing off the conveyor belt as it goes past.

As you’d expect from Gamewright, the components are very nice, and it all comes in an embossed metal tin. I like the way tins look, though it can make them hard to stack on the shelf. The box has a plastic insert to help you organize all the cards and tiles, though it’s not so great at holding the wooden pawns: I put them in a little baggie so they don’t wind up all over the box and mixed in with the cards, where they’re hard to retrieve.

The card illustrations are adorable, just as in the original, game: lots of cute little food with faces. Each type of card also has a corresponding menu tile, a rounded cardboard tile that shows the type of food, name, and how it scores or is used. These tiles fit into the slots on the game board so that everyone can tell at a glance which cards are in the mix and how they work. I will note: for storage, you put the cards in the slots, and then the tiles can be placed in the little spaces between the cards—otherwise, there’s no room for them in a stack.

The board itself is pretty nice: it’s a double layer of cardboard, so that there are some cut-outs to hold the menu tiles. The scoring track is made to look like a little conveyor belt (like a sushi-go-round), which is a nice little touch—and it’s easier to use a scoring track than keep score in your head (as in the original version). However, the scoring track spaces are very tiny, so if multiple players have the same score, you run out of room on the board.

The overall gameplay of Sushi Go Party! is very similar to the original, though the setup has changed a little bit. The goal of the game is still to get the most points after 3 rounds by “eating” particular sets of sushi, appetizers, and dessert.

To set up, decide which set of cards you’re going to use for the game: you always include nigiri, 1 roll, 3 appetizers, 2 specials, and 1 dessert. The rulebook has several suggested combinations, from the one that reproduces classic Sushi Go!, to lists that work well with 2 players or 6–8 players, to a set that is particularly cutthroat. Take the menu tiles for the cards you’re using and place them into the board so everyone can see what’s included in the deck. Then, shuffle everything except the dessert cards into one deck. The board shows how many of the dessert cards to shuffle in for each of the three rounds, based on the number of players. Then deal out cards to everyone (the exact number is also based on the number of players).

The turn is very simple: pick a card from your hand, place it face-down on the table, and then pass the rest of your hand to the next player. Once everyone has chosen a card, they’re all revealed, and you pick up the hand of cards that was passed to you and repeat. The round ends when you get passed a single card, which is then played.

At the end of the round, dessert cards are set aside (until the end of the third round), and all the other cards are scored according to their particulars. For instance, maki rolls award points to the players who have collected the most or second-most, but no points to anyone else. Tempura is worth 5 points for every completed pair you have. All of the cards except desserts are collected back up, shuffled together (along with some more dessert cards from the supply), and a new hand is dealt out.

After the third round, in addition to scoring all the regular cards, you also score the dessert cards that have been collected over the three rounds. The highest score wins! Ties go to the player with the most dessert cards.

I’m counting Sushi Go Party! as a Gen Con release even though it became available earlier this year, because this year was its first appearance at Gen Con. In fact, 2016 marks the first year Gamewright attended Gen Con—I had been surprised in past years not to see them in the Family Fun area on the exhibit hall, so I was very pleased that they finally had a Gen Con presence.

The artwork on Sushi Go Party! is really great, just like the original but with more of it. I really enjoyed the variety of different types of cards, and the rulebook has fun explanations for why things score the way they do. For instance, one tofu is worth 2 points, 2 tofu is worth 6 points, and 3 or more tofu is worth nothing—because “Tofu is really good for you, but eat too much and you could get sick of it.” In contrast, one eel is -3 points, but 2 or more eel is 7 points: “You might not enjoy your first taste of eel, but it sure grows on you!”

The wide variety of special cards is also great. The original had wasabi (triple the value of your next nigiri) and chopsticks (use to take two cards in one round), but there are a bunch of new ones. The takeout box lets you flip down any of your previously played cards for 2 points apiece—great if you get too much tofu, or if you realize you’re not going to get any points for those maki rolls you’ve been collecting.

Sushi Go! has been a family favorite: it’s really easy to teach, fun to play, and the small metal tin makes it nice for travel. Sushi Go Party! is a great way to expand on that: a bunch of new cards and enough for up to 8 players (instead of just 5). The downside is that it’s a bit less portable.

Do you need Sushi Go Party! if you already have Sushi Go!? Well, if you like the original, I think you’ll really enjoy this one, too. You can still play the original set of cards, but the additional options add a lot of replay value and let you tweak the game. And, of course, if you’ve always got just a few too many players that can fit the game, this is a great solution. If you’ve got the original and are happy with the gameplay, you don’t need to rush out and get Sushi Go Party! right away, but chances are you’ll want to pick it up eventually.

The other question is: once you pick up Sushi Go Party!, do you need to keep the original? Well, probably not. The only advantage the original offers at this point is that it’s easier for grab-and-go gaming because it’s a small package. But if you’ve got the new version, you could always set up a deck ahead of time and take just that set of cards, too. I’m still undecided but I’ll probably hang onto my small tin at least for a little while.

Overall, I think Sushi Go Party! is a fantastic upgrade to an already excellent game, and I’m excited to try out the various combinations. It’s a great game that kids and adults can play together, and makes for a great way to kick off a game night, too. Order a copy from Amazon, or ask for it at your local game store! 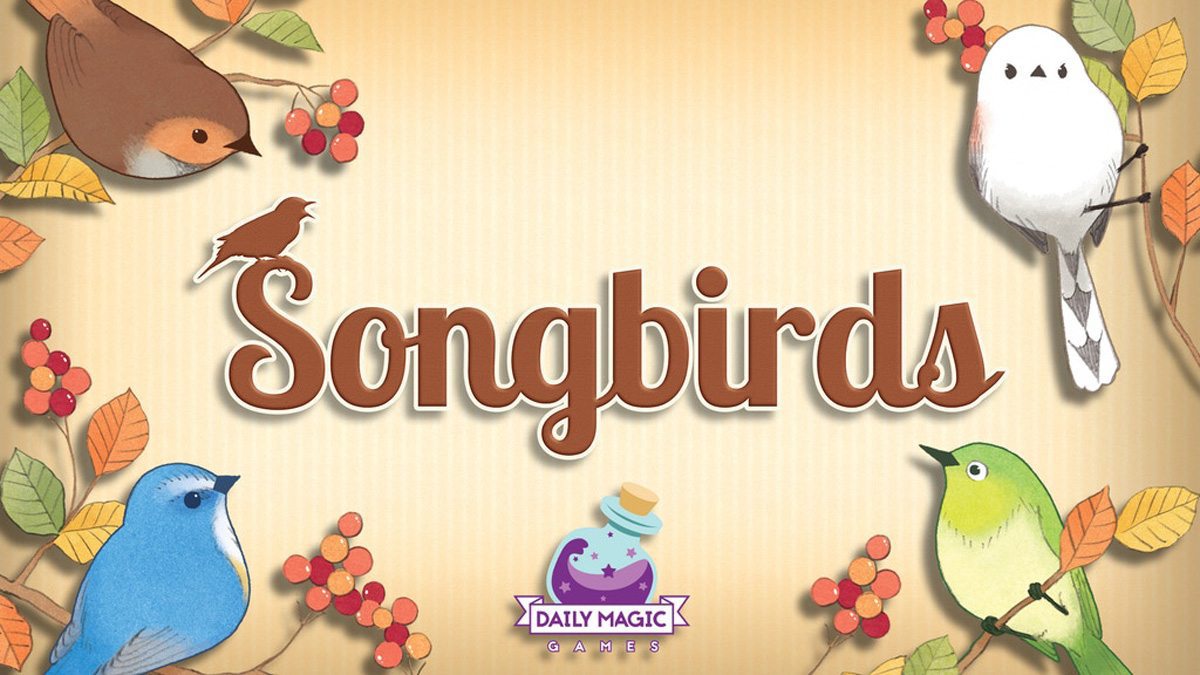 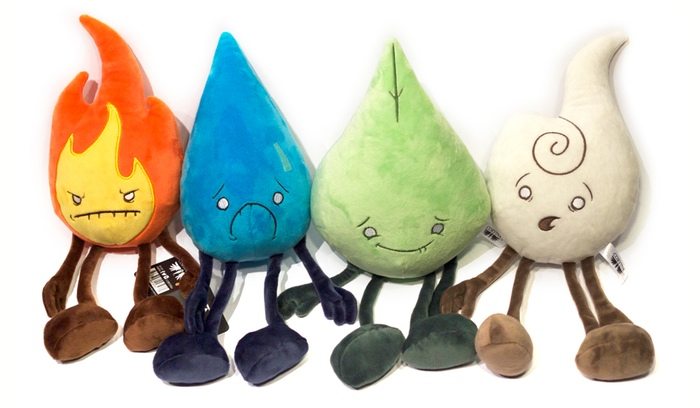