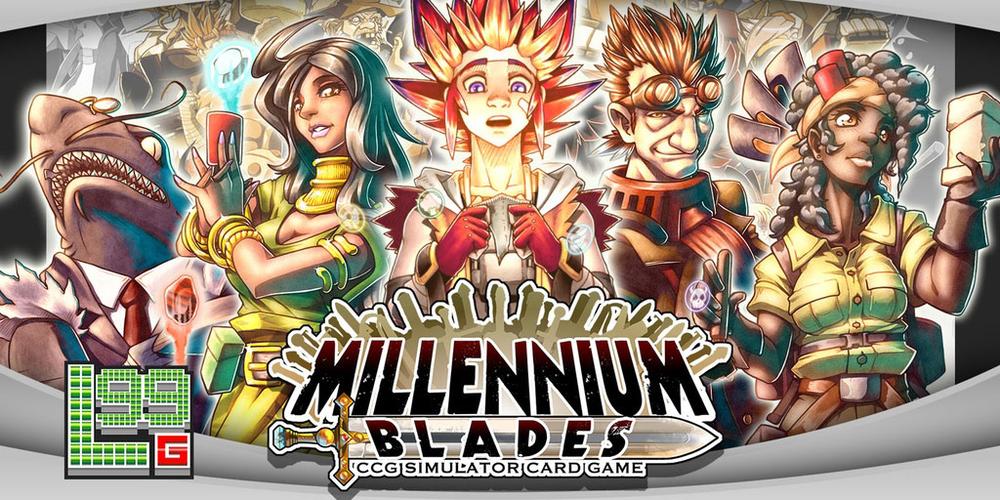 I’ve got several more Kickstarter reviews coming up later this month and in August, but for now I wanted to highlight briefly just a couple of tabletop projects that caught my attention.

Millennium Blades is a game from Brad Talton Jr. of Level 99 Games, which has published several games in the past few years. I had reviewed his very first Kickstarter project but I’ve missed a few in recent years just because I ran out of time. Millennium Blades is one that I’ve wanted to try simply because I love the very meta premise: it’s a card game that simulates playing a collectible card game. You play as a particular character, and in the game you open up booster packs, collect and trade cards, and duel other players. Yes, it all seems a bit bizarre and it may end up being one of those games that I don’t get around to playing because there’s so much to learn, but I’m keeping it on my radar. The first printing has sold out entirely, and this current Kickstarter campaign is to fund a second printing and an expansion, plus you can get in on some new Kickstarter promos.

Gate Keeper Games has a new campaign up that isn’t for a new board game, but for game-toting bags. I know, I just wrote up the Game Canopy recently and said how wonderful it was, and I still stand by that. But they were really pricey, and John Wrot’s bags are on the opposite end of the price spectrum: as low as $7 each. Although they’re shaped like those reusable grocery bags, they’re actually a bit bigger, have reinforced handles that go all the way under, and they have really adorable game-themed graphics on them. Heck, if you just want to show the clerk at the grocery store that you’re a tabletop gamer, you might even want them for that. You can pick up at Gen Con to waive the shipping fee (and then have some bags to carry home all that sweet swag).

Tasty Minstrel Games has run so many Kickstarter projects that they’ve got the process down pat. Their latest is for Yokohama, a worker placement game designed by Hisashi Hayashi (Trains, Sail to India). The Kickstarter has options for the regular retail version and a deluxe version with metal coins and a whole lot of upgraded wooden bits—these added bits are being sold at cost through the Kickstarter, so if you like really fancy versions of games, now’s your chance.

This quarterly magazine focusing on casual games is back for its fifth year: it’s a mix of game reviews, industry news, and interviews, and if you enjoy lighter tabletop games, it’s a pretty great resource. You can back the campaign for a subscription (digital and print available) or catch up on back issues. Or, if you’re a game publisher, you can also pledge at sponsor levels to buy advertising in the magazine.

In this game, you get to play as a recently hatched dragon whelp, trying to accumulate the biggest hoard of gold. Along the way you’ll eat up sheep and terrorize the countryside, but watch out for those dragon slayers. There are three dragon pawns per player to show your growth from whelp to wyrm, and each player also has their own set of unique powers.