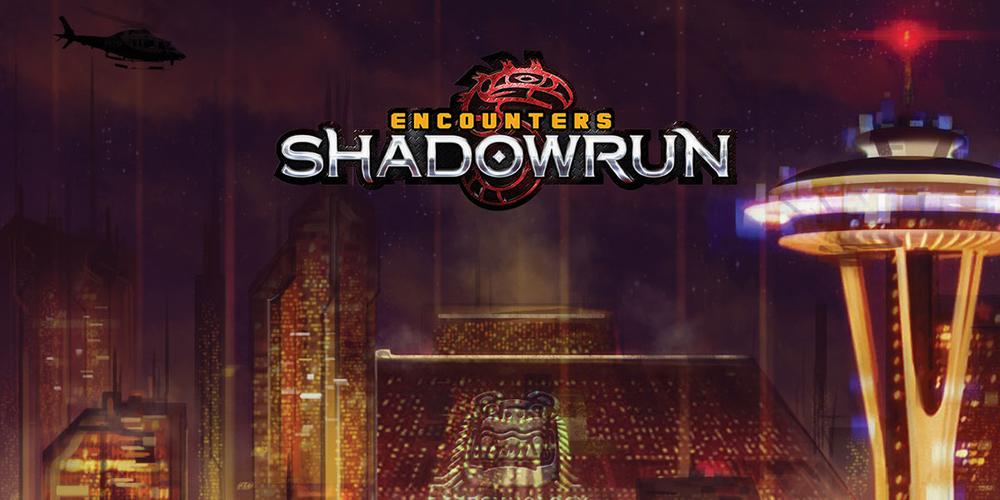 Set in the world of Shadowrun, this dice game puts you in the role of Mr. Johnson, assembling teams of shadowrunners to take on the jobs that the Megacorporations won’t be seen doing themselves. Hire runners, plow through encounters, and get paid—but get too greedy and you may lose it all.

At a glance: Encounters: Shadowrun is a press-your-luck game for 1 to 8 players, ages 13 and up, and takes about 15–30 minutes to play (although of course this depends on the number of players). It retails for $24.99 and is available for pre-order now; the street date is August 17. The gameplay is not difficult, but some of the flavor text and illustrations I would consider PG or PG-13, and the Shadowrun universe is typically not intended for younger audiences.

The components are all fairly standard quality—dice, cards, cardboard punch-outs for the Nuyen tokens. The artwork and card design will be familiar to Shadowrun players (particularly Shadowrun: Crossfire). The booklet, “An Instant Guide to the Sixth World,” gives you a primer on the Shadowrun universe, including a timeline of major events.

The District screens represent various districts in Seattle, and each is a tri-fold piece of cardstock with an illustration covering about 2/3 of the screen and the name, flavor text, and effect on the other third of the screen. I’m not sure why it’s necessary to stand these up rather than just having them face-up in a stack, because you don’t actually hide anything behind them.

The box isn’t huge, but definitely has a lot of empty space in it. The largest components (other than the rulebook and Shadowrun booklet) are the District cards, which are a long rectangle and limit the proportions of the box.

The object of the game is to be first to earn 30 Nuyen—and the game can be shortened or lengthened easily by adjusting this threshold.

On your turn, first you flip up any face-down Shadowrunners you have (if any) so they’re all active. Then, you look at the current District card and apply its effects, if relevant. You may flip a Shadowrunner face-down to ignore a District’s effects, or you may discard a Shadowrunner to pick a District to be active. Finally, start a run and face Encounters.

Turn over the top Encounter card into the first column. You have an option at this point of hiring a Shadowrunner (I’ll explain that a litle later) and then you roll all 6 red dice. To defeat an Encounter, you must assign dice to it that add up exactly to the Encounter value in the top corner of the card. These dice are now locked and placed on the card. Then, you can score, or push to flip the next Encounter. If you push, you flip the next encounter into the same column, optionally hire another runner, and roll the remaining dice.

You keep doing this until one of the following:

If you cannot match an Encounter value, then your turn is over, and you score nothing. The next player may attempt to Datasteal: they discard the failed encounter, flip up a new Encounter, and only roll the remaining unlocked dice. Basically Datastealing allows them to take over your run and potentially score a lot more from your efforts. You can prevent a Datasteal by discarding a Shadowrunner to burn the run—all of your previous Encounters are discarded instead. If multiple failures and Datasteals occur and it comes back to you, they must be discarded and a new run is started—you cannot Datasteal a run that you previously failed.

There are various other effects that come into play: After a run has been finished (either scored or failed and discarded), if any of the Encounters had the district symbol on it, a new District card is rotated to the front. Shadowrunners may be discarded for their abilities during a run, and generally you may pay 3 Nuyen to the bank to keep a Shadowrunner (and immediately make it active) after using it. Megacorporations also have their own special abilities—these generally also cost Nuyen to activate, and can be activated at any time, including during another player’s turn. And some Encounters have special effects, also: for instance, the Vampire must be defeated twice with a single roll, and the Chaos Sprite prevents you from using Shadowrunners to defeat it.

Each time you flip over a new Encounter, you have an opportunity to hire a Shadowrunner if you have at least 2 Nuyen. You draw the top card: if it costs 2 Nuyen, you must hire it; if it costs more, you may choose to hire it or discard it. You have a limit of 5 Shadowrunners on your team at any time—if you ever gain more, you must discard one.

The game ends immediately when a player has 30 or more Nuyen and wins.

For solo play, there are a couple of special Encounter cards that are removed, and you do not use Datasteal rules or Megacorporations. Instead, your goal is to reach 20 Nuyen by the end of 12 runs (or adjust the difficulty by reducing the number of runs you get).

I like playing press-your-luck games. Many of them (particularly the earlier ones) don’t offer a lot of strategic decision-making beyond “keep going or stop,” but there do seem to be more games now that also throw in some ways to mitigate the chance element and allow you to plan strategically, at least somewhat. But, of course, it wouldn’t be a press-your-luck game without some sort of risk-reward trade-offs.

In Encounters: Shadowrun, there’s an interesting ebb and flow of the risk: as you lock dice, it’s going to be harder and harder to pass the next Encounter with fewer dice. But if you manage to lock all of them exactly, then your next card will be a bigger reward and your risk resets because you get all 6 dice again. The more times you can cycle and get to the next column, the bigger the payout will be: sometimes, in fact, the payout from one turn can be big enough to win the game … but you’ll probably need to spend a few turns building up a good team before that happens.

There’s also a little more direct player interaction in Encounters: Shadowrun than in some other press-your-luck games, which are often just a side-by-side race. For instance, many of the Megacorporation abilities can target other players. For instance, Neonet can pay 2 Nuyen to discard the current Encounter, and then choose one for you from the discard pile. Mitsuhama Computer Technologies can change the District during your run. And Saeder-Krupp can actually remove one die for an entire turn.

But that’s not all: the ability to Datasteal is also pretty interesting, and something you need to take into account when you decide whether to stop or press on. If you fail an Encounter, what will you be leaving behind for the next player? Are you will to discard a Shadowrunner to burn the run? I haven’t seen many press-your-luck games where you can benefit from somebody else’s run like that.

Then, of course, there are the Shadowrunners. Shadowrunners can protect you from Megacorporation abilities, allow you to manipulate the dice, and so on. Some of them have bonus effects against particular keywords on Encounters. Although it costs money to hire a Shadowrunner, it’s often money well spent, because it’s very hard to escalate to a higher-scoring run without them (unless you just get really lucky). Since you can hire one before each roll of the dice, if you have enough money banked, you can even replace Shadowrunners as you use them.

I’ve mentioned before that I’m not as invested in the world of Shadowrun—I didn’t play the RPG or the videogames, and so the Megacorporations and the various characters don’t mean quite as much to me. However, I did play this with people who like the Shadowrun world, and they were pleased to see that all of the cards have a bit of flavor text on them just to help set the scene and pull you into the universe. You can certainly play Encounters: Shadowrun without having a history with Shadowrun, but I think having a personal connection would definitely enhance the experience.

The one thing I’ve noticed is that the flow of the game seems to involve getting a little money, hiring Shadowrunners, and doing that for a while, and then having one big payout to win the game. It’s harder to win by earning a little bit at a time and just not spending it, but you also have to spend wisely. If your team is only one Shadowrunner and you use its ability, then you’re left without much of a team to tackle the next Encounter. Having a good mix of abilities can make a huge difference.

Overall, I think Encounters: Shadowrun is an interesting twist on a press-your-luck dice game. There’s still luck, but there’s also a bit more strategy and a good helping of take-that and messing with your opponents. Encounters: Shadowrun just went up for pre-order online this week, and should be in stores mid-August. 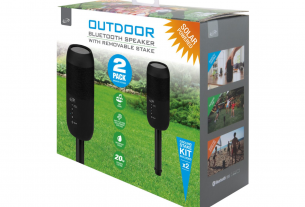 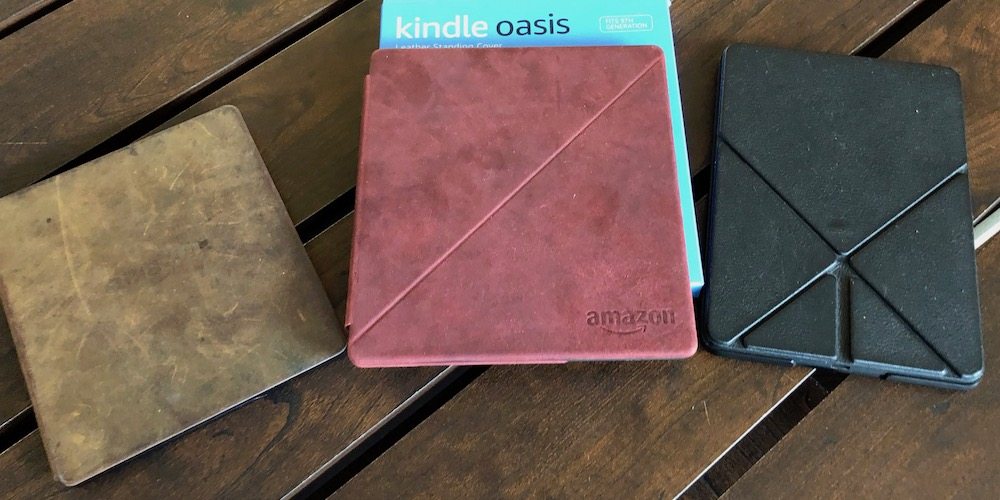