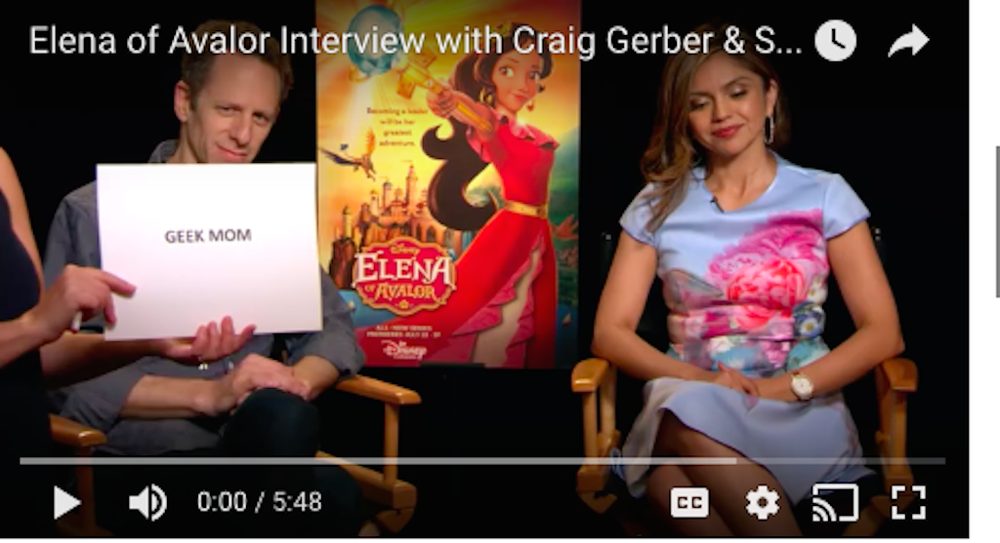 Elena of Avalor is executive-produced by Craig Gerber (of the Emmy Award-nominated Sofia the First). Silvia Cardenas Olivas (Moesha, The Brothers Garcia), an alumna of the National Hispanic Media Coalition’s Television Writers Program, is the story editor, and Elliot M. Bour (The Little Engine That Could) is the supervising director. The series’ cultural advisors are Marcela Davison Avilés, founder of The Chapultepec Group, co-founder of the international Latino arts initiative Camino Arts, and Director of Humanities Programs at the FDR Foundation at Harvard University; and Diane Rodriguez, Associate Artistic Director of Centre Theatre Group and co-founder of the theatre ensemble Latins Anonymous, who was recently appointed by President Obama to be a member of the National Council on the Arts.

Sitting down with the creators was such a wonderful pleasure. Coming from a home where we all love Sofia the First, there were many questions from both my five-year-old and my husband. Mark wanted to know if there would be any crossover between Sofia and the “Secret Library,” which is a story arc from that show. It revolves around adventures through magical books. Craig explained that Sofia and Elena’s stories are closely tied together. He went on to promise that shortly there will be a special SPECIAL crossover. There is mention of Sofia’s amulet and the powerful magic that touches both characters.

Next, I got to ask the creators: “How is Elena going to save the world?” Silvia answered, “One day at time, one adventure at a time.”  She went on to say that Elena will learn and make a lot of friends and every single day get closer to saving the world. I let my daughter watch the interview and she approved of this answer.

It was amazing to share with them that a whole new generation of girls is now identifying with strong female characters like Elsa and Anna and Rey from The Force Awakens. Asking them what message they wanted to convey with Elena and her journey, Silvia explained that, although Elena felt ready to rule on her very fist day, she needed to step back and take advice from her grandparents and be patient as little by little she becomes ready to lead her kingdom. She isn’t afraid to get her hands dirty and has the bravery, but she now needs wisdom.

There are many great new characters we will get to meet as we adventure with Elena. I happen to have a tie to Zuzo, her spirit animal and magical guide. Keith Ferguson brings humor and wisdom, and he just happens to be a good friend of mine dating all the way back to college. Much like Clover to Sofia, Zuzo will be there to offer direction and comfort to Elena throughout the series.

One interesting observation is that Elena can now see these magical creatures all on her own. In the past, they appeared only after being conjured by a wizard first. This is an exciting new power. Along with being the only royal who has held the family scepter and made it glow, her intuitions are changing as well. Just as Rey learning the Force in The Force Awakens, we will be on Elena’s journey as she grows in her abilities.

Many of the inhabitants of Avalor come directly from mesoamerican and South American regional mythology. Zuso is based on a Mayan belief that everyone has a spirit animal to guide them. We also  get to meet the flying Jaquins. The creators wanted the Avalorian version of a Pegasus as the kingdom mascot. Craig explained that they took two South American animals, the Jaguar and the Macaw and “mashed them together.” I mentioned that Ella will no doubt have a Jaquin stuffed animal too .

Getting to speak with Craig and Silvia was amazing. I thanked them for the gift of Elena of Avalor. Thank you as well to our friends at the Disney Channel for giving us this opportunity. We are so excited to watch this Friday, July 22nd.

Here is some more official  information about the show.

The series is a spin-off of Sofia the First, which has delivered the two highest-rated telecasts in cable TV history among kids 2-5 and girls 2-5, and the #2 preschooler cable TV telecast ever in total viewers, adults 18-40, and women 18-49.

Disney Junior reflects the emotional connection generations of consumers have to Disney storytelling and Disney characters, both classic and contemporary. It invites mom and dad to join their child in the Disney experience of magical, musical, and heartfelt stories and characters while incorporating specific learning and development themes designed for kids age 2-7. Disney Junior’s series blend Disney’s unparalleled storytelling and characters kids love deeply with learning, including early math, language skills, healthy eating, and lifestyles, and social skills. In the U.S., Disney Junior is a daily programming block on Disney Channel and a 24-hour channel. There are 34 Disney Junior channels in 25 languages around the world.

Bios for Craig and Silvia

Gerber also developed and serves as executive producer of Disney Junior’s hit award-winning animated series Sofia the First, for which he won an Emmy Award for writing the series’ theme song. He has also co-authored many of the Sofia the First storybooks.

A graduate of the University of Southern California’s School of Cinema-Television, Gerber’s career took off after he participated in a screenwriting showcase at the university that led to a major Hollywood studio optioning the first script he had ever written. Gerber is also an award-winning short film director whose comedic short “Hang Time,” won Best Narrative Short at the Sonoma Valley Film Festival and Best Digital Short at the Sedona Film Festival in 2003.

Olivas began her career in television as a stage manager on El Show de Paul Rodriguez. She served as a writer-producer on the hit series Moesha, and wrote and co-executive-produced The Brothers Garcia, for which she was nominated for a Humanitas Award. Her additional live-action writing credits include Disney Channel’s Jessie, Raising Dad, Just Jordan, and most recently the EEmmy-nominatedEast Los High, the first English-language TV series with an all Latino cast.

A Los Angeles native, Olivas is a graduate of Loyola Marymount University. She resides in South Pasadena with her husband and eight-year-old son.

Writing the New Queen of Wonderland