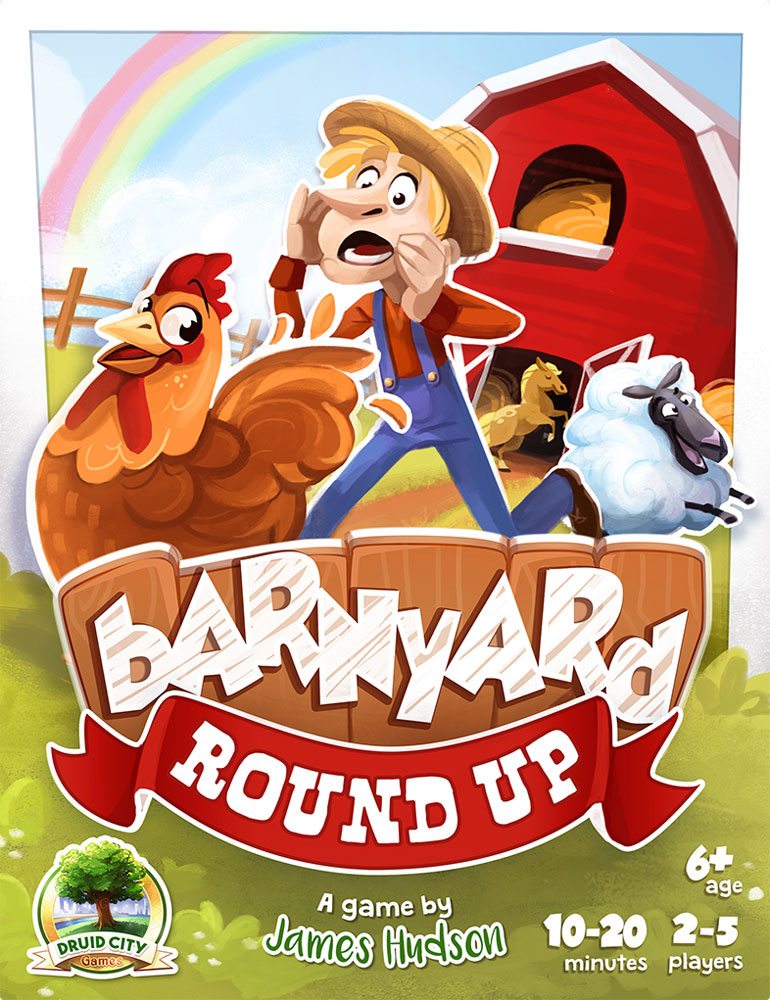 Everyone’s rounding up their animals for market day, and nobody wants to be stuck with those noisy crows. Gather up sets of the most valuable animals, and try to pass off all of your crows to other players in this quick-playing bluffing game.

At a glance: Barnyard Roundup is a game by James Hudson for 2 to 6 players, ages 7 and up, and takes about 15 minutes to play. It’s currently seeking funding on Kickstarter, with a pledge of $20 for a copy of the game. The game is kid-friendly, but requires bluffing, so if your kids are unable to keep a poker face, they’ll be at a significant disadvantage—otherwise, though, there’s no inappropriate content for younger players.

My review is based on a prototype provided by Druid City Games so I can’t judge the final component quality, but the artwork on the cards was finished. The illustrations of the farm animals by Mr. Cuddington are cute, and each animal has a point value clearly marked on the card.

The goal of the game is to score the most points by collecting farm animals but avoiding crows.

To set up, make a pool of tokens with 1 Thief and 1 Excuse Me token per player, mix them up face-down, and then deal one to each player. Then mix the Scarecrow token into the pool. Set all of the Animal Bonus cards and Set Bonus cards aside for now. Shuffle the Animal cards, remove 8 cards at random and put them back in the box (without looking), and then deal Animal cards to the players—the exact number of cards depends on the number of players.

During your turn, you must bluff animal cards, you may use a token if you wish, and then you draw back up to your hand size.

To bluff, you take any number of matching cards from your hand, and then place them face-down in front of another player and declare one of the five farm animals (not a Crow). The other player must decide if you’re bluffing or not before revealing the cards. If they’re right, they get to take the Animals and place them in their collection. If they’re wrong, you take the cards back and put them in your own collection.

Crows are a special case, because they are negative points. You may not declare that they’re Crows, so you have to pretend that they’re something else. If the other player falls for it, they’re stuck with the Crows in their collection, but if they disagree, then you have to take the Crows. For every 3 Crows you collect, you get to draw a token (because Farmer Brown takes pity on you).

The Thief token may be discarded to attempt to steal Animals from another player. Pick a player and choose an Animal—they have to give you all of that type of Animal in their hand. If they have none, they may give you all the Crows in their hand. If they have no Crows either, nothing happens. If you lose any cards to the Thief, you draw back up immediately.

The Excuse Me token may be discarded to interrupt a bluff played on somebody else before the cards are revealed, whether that player has already made a guess. The cards are moved to you, and you get to respond as if the cards had been played to you.

The Scarecrow token is played immediately when it is drawn: you discard it back to the pool, and then disperse 3 of your Crows to other players. They must be distributed as evenly as possible among other players—any remainder are removed from the game.

At the end of your turn, you draw back up.

When the last card is drawn from the deck, the game ends immediately, and players add up scores.

Each Animal card is worth its face value: Cows are worth 5 points each, Pigs are worth 4 points each, and so on. If you have the most of a particular type of Animal, you take the matching Animal Bonus card, which is worth 5 points. (If there’s a tie for most, nobody gets the bonus.) Also, for each complete set of all 5 farm Animals, you take a Set Bonus card, worth 10 points. Each Crow subtracts 5 points from your score. You also lose points for any Crows still remaining in your hand.

High score wins; ties go to the player with the most Animals, and then to the fewest number of Crows.

Barnyard Roundup is a pretty funny game that kept my daughters giggling a lot. It turns out my 12-year-old is very good at bluffing, and my 9-year-old is not so great at detecting lies, though, so it’s not a very fair fight with them.

The gameplay reminds me a bit of another bluffing game, Cockroach Poker: in that one, you also offer somebody a card and make a claim about it, and the person has to guess whether you’re lying or not. That’s where the similarity ends, though. Cockroach Poker gives the recipient the option of peeking at the card and then offering it to somebody else—and the goal is to avoid completing a full set of insects. In Barnyard Roundup, you can offer entire sets of cards rather than just single cards, and you are trying to collect the most valuable sets of cards. (And there’s no passing the set along, except in the case of Excuse Me tokens used to claim a set of cards for yourself.)

One of the interesting aspects of Barnyard Roundup is that if you have good cards in your own hand, the only way you can collect them is to offer them to somebody else first, and you have to fool them, whether that’s convincing them that you’re telling the truth when you’re lying or convincing them that you’re lying when you’re actually telling the truth. And if you don’t fool them, well, you’ve just given them some good cards. Then the other question is whether you try to get an entire set at once, or parcel them out one at a time, in the hopes that you’ll get at least a couple of them. But splitting up sets means that you’re spending more turns to distribute the same number of cards. Also: since you’ll lose points for Crows left in your hand at the end of the game, you have an incentive to pass them off to other players—and everyone knows this.

Removing 8 cards at random from the deck during setup makes it impossible to know exactly how many of each animal are in the deck—that makes it a little bit harder to calculate whether somebody could possibly still have a particular animal in their hand, unless the number they’re offering you and the number already visible on the table (and in your own hand) exceeds 15. It makes the game a little more about reading the other players and less about card counting, though some amount of card counting can still help you gauge the odds.

There were a couple of things about Barnyard Roundup that aren’t great. The Crows do seem like a pretty harsh penalty: -5 points per crow can be huge, and the only way to get rid of them is by drawing the Scarecrow token—if you don’t, you’re stuck with them (because you won’t draw another token until you get 3 more Crows). In one game, my 9-year-old ended up with 9 Crows, for a 45-point penalty—it was a wonder she even had a positive score by the end of it.

The other bluffing game that my kids have played is Sheriff of Nottingham, which is a really great game, too, but Barnyard Roundup has the advantage of being a much shorter and simpler game, making it easier to play with kids. However, in Sheriff of Nottingham, you take turns being the sheriff and everyone tries to get goods past you, legally or illegally. It’s a round-robin affair, where everyone passes cards to each other player the same number of times. In Barnyard Roundup, you get to choose which player to pass cards to on your turn. That means that if players discover a weak link in the chain (in this instance, the youngest player who usually falls for the bluff), then they know that they can build up a good collection by passing cards to her every time.

And, of course, the question that goes along with any bluffing game for kids is “do you really want to teach your kids to fool you?” I mean, it comes with the territory, I suppose, and my 12-year-old may be trying to sneak things past her dad already outside of tabletop games. But playing games like Barnyard Roundup just might be giving her some extra practice. On the other hand, I suppose it also gives me some practice identifying her tells, if I play it right.

Barnyard Roundup is a fun bluffing game for the whole family. It’s quick to learn and play, and is a nice introduction to the bluffing mechanic. Druid City Games is also offering a 100% money back guarantee. For more information or to make a pledge, visit the Kickstarter page. 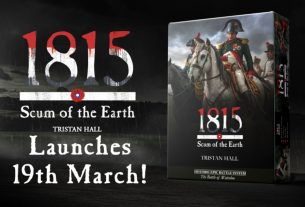 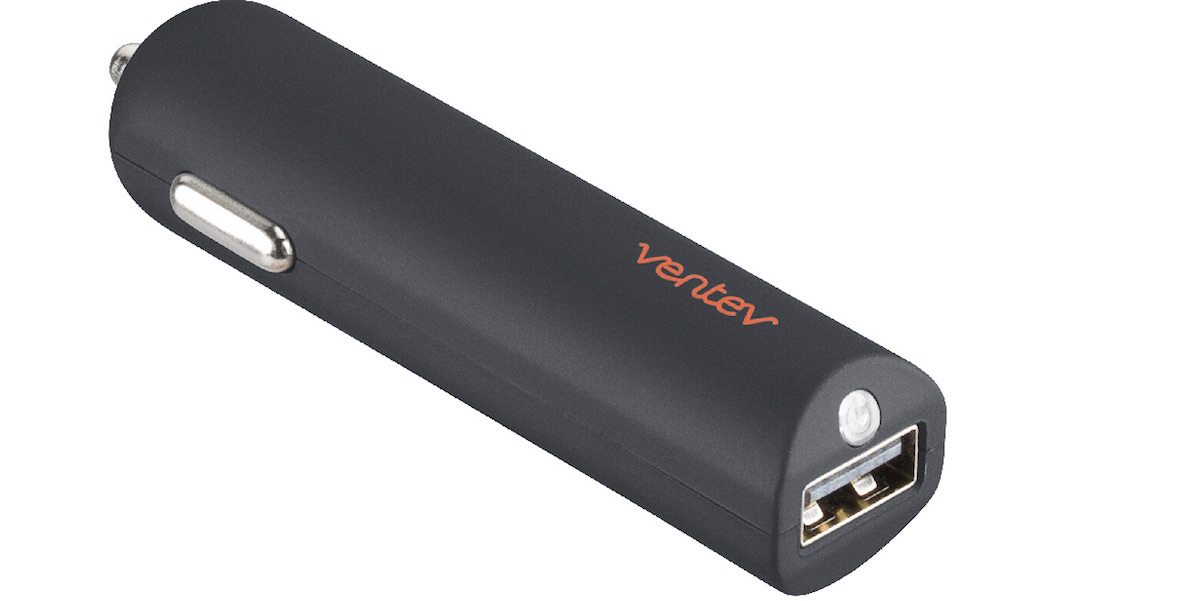 2 thoughts on “Kickstarter Tabletop Alert: Bluff Your Way to a ‘Barnyard Roundup’”