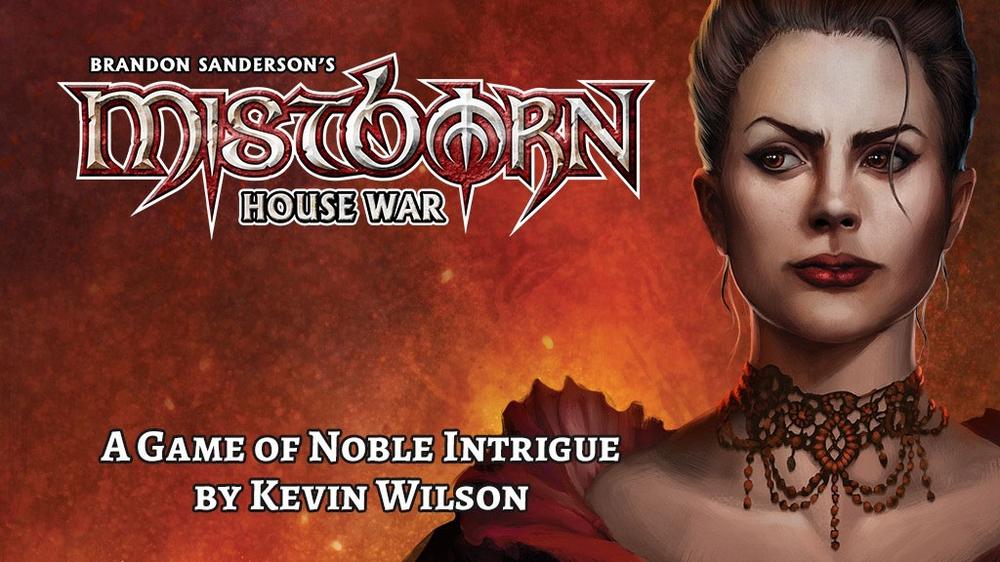 Set in the world of Brandon Sanderson’s Mistborn series, Mistborn: House War pits the Houses of the Final Empire against each other—and against the cataclysms that are tearing the world apart.

At a glance: Mistborn: House War is a game by Kevin Wilson for 3 to 5 players, ages 12 and up, and takes up to 3 hours to play (though playtime can easily be adjusted for a shorter game). It is currently seeking funding on Kickstarter, with a pledge of $50 for a copy of the game. (There’s also a $100 pledge level for the Prestige level, which includes various promo cards and other bonuses.) The subject matter of the books is probably best for teens and up, but if you don’t know the books then you may not know specifics of the story, so potentially the game could be for younger players. However, the game is very much about negotiation and haggling, and I would recommend playing it with those who won’t take things personally.

Since the game is currently on Kickstarter (already funded and plowing through stretch goals), the final component list may vary from what’s listed here. For the most updated list of components, check the Kickstarter page. I can’t comment on the final quality of the components since I’ve only played with a prototype, but the artwork at least looks pretty sharp, and I like the fact that the resource tokens are differentiated by both color and icon, making it color-blind friendly.

To set up the game, each player takes a Noble House card and collects the resources shown on the card. The rest of the tokens are set nearby to form the supply. The Personality cards and Problem cards are shuffled separately and set on the board. The Vin Problem card is set aside, and shuffled into a portion of the deck; the length of the game is determined by how much of the deck you use, but Vin is always shuffled into the bottom portion of the deck. Unrest starts at 0. Draw one Problem card per player and put them on the board, according to urgency.

Most of the board is taken up with a large grid, 3 columns high and four rows across. (The bottom row is only used for four or five players.) The columns are labeled from I to IV, and indicate the urgency of the problem—I is not urgent, and IV is imminent. Problems are moved to the right each turn, and if a Problem m0ves off the edge of the board, it erupts and there are consequences.

First, the active player collects the resources shown on the Noble House card—these will be resource tokens and Personality cards. If there are not enough resources in the supply, you steal them from other players.

Next, each of the Problem cards on the board is moved to the right one space—the active player may choose the order in which they are moved. If you ever try to put a Problem in a column that is already full, it goes in the next column (closer to erupting). If any Problem cards fall off the edge of the board, they erupt. If the eruption effect targets a single player, the active player chooses who is targeted. (Note: the Steel Ministry player is not affected by any eruption effects on Problem cards that say “Steel Ministry” on them.)

Then, the active player draws a new Problem card from the deck and places it on the board in the appropriate column.

Finally, the active player chooses whether to attempt to solve one of the Problems on the board or to pass. If you pass, you may collect any 1 resource from the supply or draw a Personality card. If you choose to solve a Problem, then place the Active Player marker on the Problem you wish to solve, and negotiation begins.

The negotiation is really the bulk of the gameplay. Each problem shows a number of icons across the bottom of the card and has a point value in the top corner. Some Problems also have additional effects (e.g., “When solved, add 1 Unrest.”) and all have eruption effects (e.g., “Ruin 1 Skaa resource.”). To solve a problem, you and the other players must collectively contribute (and discard) enough resources to match the icons across the bottom. Atium is a wild resource and can be used in place of any resource (though there are some Problems that specifically require Atium); also, any two resource cubes may be spent as a single resource of your choice.

Once negotiations begin, players may make any sort of deals they wish, offering resources, Personality cards, promises of future favors, and so on. Or people may threaten to play negative Personality cards unless they’re allowed to help. The active player makes the final decision about which players may help with the Problem, and usually offers to split the Favor points with people who help. If the players succeed in solving the Problem, the active player takes Favor points (and distributes, if needed) and the Problem is discarded (and any “if solved” effects take place). If the Problem is not solved, whether because not enough resources were contributed or a Personality card made it impossible, all players get their resources back (but played cards are discarded), and the active player’s turn ends. You may only attempt one Problem per turn, whether it is solved or not.

Play then passes to the next player.

The game can end in one of two ways: the Vin Problem is solved, or Unrest reaches 8. Vin is the heroine of the Mistborn series (and is a big problem for the Houses). If the players manage to “solve” the Vin Problem, the game ends immediately and the player with the most Favor wins. If, however, Vin is not solved, then Unrest goes up by 4 (which is likely to cause the game to end). If Unrest reaches 8, either before or after the Vin card appears, the Houses have been overthrown—in that case, the house with the least Favor wins. You don’t want to be too close to the ruling class when the revolution comes.

There are various effects on the cards and I won’t get into the specifics other than these two: “Ruin” and “Destroy.” Some effects will Ruin a resource—that means you place a “Ruined” token on top of a resource on somebody’s Noble House card, preventing that player from collecting the resource during their turn. Destroying resources is like discarding resource tokens, but instead of returning them to the supply, they go to the “destroyed resources” spot on the board—they’re essentially gone from the game. Both of these effects reflect the way the world is falling apart: resources are very limited.

If you’re a fan of the Mistborn series, then it’s quite possible you’re one of the 400-plus people who has already backed at the “Prestige” level and you can’t wait for the next stretch goal to drop. Let me preface this by saying that I have not actually read the Mistborn series myself, so I will not be the best judge of whether fans will like the game. But if you like games that involve a lot of negotiation (and potential backstabbing), then I can say that this is a game that you can enjoy even if you don’t know the books at all.

I first encountered the game at GameStorm 2015, when the folks from Crafty Games asked if I wanted to try a demo of their game. I enjoyed it, but then didn’t hear much about it until recently when they were preparing to launch the Kickstarter campaign. Alex Flagg (who’s local to me) was able to bring over a more recent prototype and I got another chance to play it. The gameplay itself has not changed too much since the first demo, but the campaign has hit a lot of stretch goals to add more Houses to the game, including some that can mix things up a bit. Flagg explained some portions of the story to give me a little more background as we played, but honestly you get a lot of it just through context—but I think the various Problem cards and Personality cards will make even more sense to people who are familiar with the series.

The game’s structure is an interesting one—it’s semi-cooperative, because you generally have to work together to solve the Problems before they erupt, but only one player will win. Unlike some semi-coop games, though, there isn’t an “everyone loses” scenario. Instead, if the Unrest reaches its limit, there is still a winner—the player with the least Favor (or most Disgrace). In the “everyone loses” type of game, sometimes you end up with a player who knows they can’t win, so they just want to watch the world burn: better for everyone to lose, right? In this game, though, that’s a valid strategy that could win the game. However, if you tip your hand too early and your opponents realize that’s your strategy, it might cause them to cooperate even more.

Personality cards can be very powerful, and there’s a great variety. There are cards that make Problems easier to solve by removing some of the requirements, and others that make Problems more difficult by adding more requirements. There are some that can be put into play face-down, usually taking effect at the end of the game. For instance, one card will let you take Favor or Disgrace for each Prestige resource you have left at the end of the game—so depending on how the game ends, you could boost your score toward a win, or reduce it if the game ended due to Unrest. Some cards move Problems closer to eruption, and some can move them back on the timeline.

The Problems are also a good mix. In general, the problems that can be solved by a single player aren’t worth too many points, and harder problems are worth more points. But sometimes you solve problems not so much because you’ll score points, but because you really don’t want the eruption effect to trigger. Since the active player gets to decide who is affected by eruption effects, the timing is very important. And, because you can only attempt to solve one problem on your turn no matter what, sometimes you’ll have to make tough decisions about which problem to solve, and which to let slide.

Flagg described Mistborn: House War as “a game of frenemies,” and that seems pretty apt. There’s a lot of backstabbing, shutting people out of deals, stealing resources from each other … followed by pleas for assistance. In this game, alliances are constantly shifting. Betrayal may not always be sudden, but it is inevitable.

For more about the game or to make your pledge, visit the Mistborn Kickstarter page.

New & Upcoming Board Games in March 2017