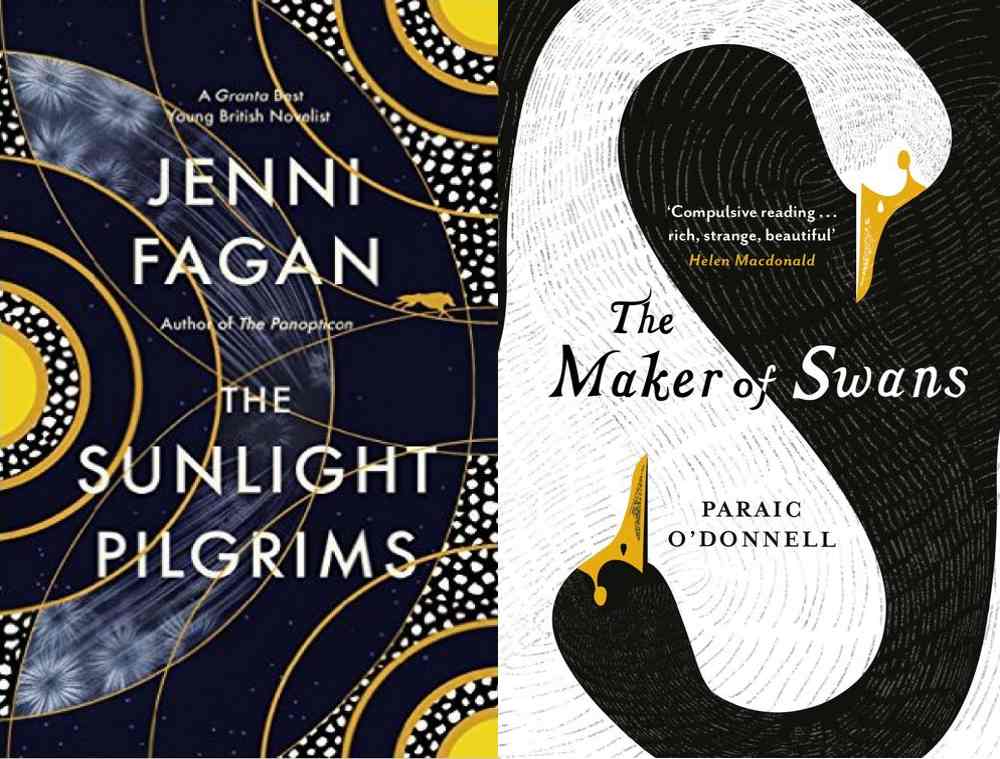 Two very different books are the subject of my latest Literary SFF post. The Sunlight Pilgrims by Jenni Fagan is a delicate voyage of self-discovery against the backdrop of an impending ice age. The Maker of Swans  by Paraic O’Donnell is a gothic fantasy, set in an aging house, written in the spirit of Susanna Clarke’s Jonathan Strange and Mr. Norrell.

With The Sunlight Pilgrims, I am playing catch up. Jenni Fagan’s debut Panopticon is a novel that I’ve never managed to get around to reading, despite its dystopian theme and critical acclaim. I hoped to make amends for this by diving straight into her follow-up.

Whilst The Sunlight Pilgrims can be deemed science fiction, the setting of the novel is (in many ways) incidental to its delicate plot. The book is set in the near future (2020), with climate change bringing down a long cold winter upon the Northern hemisphere. Temperatures are predicted to plummet to – 54°C.

The novel is set in rural Scotland in a caravan park. It’s a place filled with misfits–people who have opted out or been ostracized from mainstream society. Rural Scotland is not the warmest of places in an average winter and this one promises to be the harshest on record.

The whole novel has a sleepy pace to it. As the freeze gradually sets in, life slows down, almost to its barest functions. Dylan is in Scotland to scatter both his mother’s and grandmother’s ashes. They had all lived in a Soho (London) cinema, but after the two women in Dylan’s life died suddenly, he is left adrift. The cinema was in massive debt, and he left his home, heading to the distant caravan owned by his mother.

Stella is a young girl, once a boy, who is trying to come to terms with her change in gender. The attitudes of parochial Scotland make this transition difficult, and Stella finds herself excommunicated from a community that is soon to be cut off from the world. When Dylan starts to date Stella’s mum, the two find a comfort in having the other around.

The blank white of a freeze-out is often used in literature to provide a stark contrast on which the author paints their tableau. So it is here. The Sunlight Pilgrims is about grief, isolation, and accepting oneself for who you are. The pristine snowy backdrop helps brings Fagan’s deft characterization to life.

As the world freezes and the crisis deepens, the minutiae of life continue. Food needs to be cooked, rubbish collected, and shopping done. People continue to love, bully, and battle to overcome their woes. Wherever there is devastation, the human side of life rolls on undisturbed.

The Sunlight Pilgrims features a quiet and beautiful apocalypse. Fagan’s descriptions of a world freezing over are as dazzling as the snow and ice she’s depicting. Better still are her teasing out the emotions and feelings of her characters. This is not an explosive novel. It’s thoughtful, understated, and very, very good.

The Maker of Swans is an altogether more intriguing affair. At its heart lies several mysteries. Hidden powers and secret covens govern this gothic fantasy. The events of The Swan Maker anchor around three characters: the reclusive and extremely wealthy Mr. Crowe; Clara, a young girl; and Eustace, Crowe’s butler. They live on a large country estate, isolated from the rest of the world.

How Clara came to be at the house is unclear. She is Crowe’s ward, but it is Eustace who looks after her. As his servitude nears its end, he dreams of adopting Clara and becoming the father he’s always wanted to be. There are clearly supernatural effects in play. Crowe is much older than he appears, and Eustace has been his manservant for significantly longer than is usual for such a tenure. Clara has free rein of the house and all its secret passages. She roams around, creating drawings and stories about fantastic creatures as she goes. Clara is a girl with a wild imagination, but does she have powers of her own, and what is the truth about the other Clara, who lives in her mirror?

The peaceable life the three lead is shattered when Crowe, acting like a lovestruck teenager, impetuously murders another man, using something that appears to be magic. The imperious and terrifying Dr. Chastern comes to investigate. He is a man who wants to be judge, jury, and executioner.

The Maker of Swans oozes atmosphere. Author Paraic O’Donnell uses beautiful description to build the otherness in which his characters reside. Dr. Chastern and his associates exude a rare sense of menace. The story features a host of well-drawn and colorful characters.

This one had me guessing right up to the end. It’s essentially a story about the power of creativity. If you like gothic fantasy, then The Maker of Swans is definitely for you. I’ve been watching the first series of The Magicians based on Lev Grossman’s trilogy of the same name. The two are cut from similar cloth.

So two fine books here. Fagan’s is definitely the more thoughtful–the more literary, if you will. O’Donnell’s is altogether more fun–a tale of magic with a definite chill.

Disclosure: I received copies of both books for review.