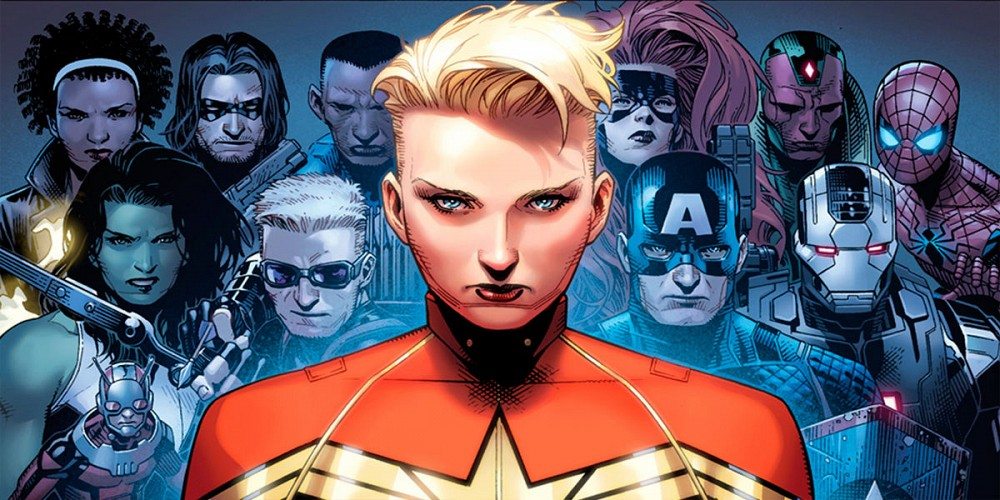 Herein lie spoilers for Civil War II #1. If you haven’t read it yet, you haven’t heard the news, and you’d rather not, you should stop here…

Still with me? All right, let’s go.

Right. So the Cap thing stirred a lot of pots, agitated a lot of rage bees, Brought out some haters and a lot of ugliness both among and between comic fans. Shame, really; it was an opportunity for excellent, honest evaluation of the state of Marvel’s writing and the value of the shock surprise. The manner in which such things can be used for good or for ill, as an opportunity to take a story in a new direction or a lazy gimmick. The verdict is still out on Hydra-Cap. In all honesty, I’m over comic Steve and have been for a while; Sam Cap is my Cap and his story is the one in which I’ve opted to invest my Captain America time, energy, and give-a-heck.

I had no plans to read the main Civil War II storyline books because the big events have, for the last several years, been disappointing. They don’t ever have the reverberating impact the media buildup promises. I figured I’d get the important beats from my involved monthly issues and Wiki the rest as needed. I didn’t even bother to pick up the FCBD Civil War title and avoided most of the coverage and commentary so I had no idea that James “Rhodey” Rhodes had been gut-punched by Thanos. And while he wasn’t actually confirmed dead until last week’s Civil War #1, I think we all know that a mortal, no matter how good his armor, isn’t going to survive the fist of the Mad Titan.

I had planned to write a Padawans suggesting that the fridging of a prominent African-American character, who hasn’t yet had the opportunity to realize his full potential, isn’t any more acceptable than fridging a female character, that Rhodey deserved to be more than a catalyst for conflict, more than a corpse for Tony and Carol to fight over, but several people have done so in excellent fashion, including Evan Narcisse over at io9  so after a brief summary, I’m going to take this in a slightly different direction.

The Ulysses storyline is, potentially, great one: an Inhuman who can see the future, who knows when and where horrible things are going to happen, giving the heroes an edge, the ability to prepare ahead, to plan, to be in place when the worst occurs. He has the power to guide them to the battles that need to be fought, that need to be won if humanity is going to survive.

Of course, every time there’s a battle of cosmic magnitude, there are going to be casualties. Anytime you need the Avengers, The Ultimates, the Inhumans, and the magic users to defeat an enemy, not everyone is going to walk away unscathed. And that’s fine. Part of what makes the great superhero stories truly great are the moments in which the heroes are in actual danger (one of the reasons I’ve always engaged more with the human heroes, the street-level folks, those who depend on tech and brains rather than invincibility. Captain Marvel being a notable exception because… well, she’s Captain Marvel). Those are the moments our heroes are at their most brave and their most human. Those are the moments in which we can see ourselves in them, the moments we know greatness is something we can achieve. The questions of whether or not the heroes take those risks, whether or not they’re obligated to put themselves in danger if they know that danger is coming and they know they might not win, whether to not they throw themselves into vicious battles they might not otherwise have even been part of? Of whether or not having the power to see the future means we should change it? The ways in which the various answers to all of the preceding change conventional wisdom, alter morality? That is some damn fine story material right there.

Bendis, dude. I know that you only have some much control, but you didn’t need to kill Rhodey to give Carol and Tony a reason to be at one another’s throats. People have burned countries over less important things than the answers to those questions. The personalities being what they are, the differing understandings of threat level, of scope… that would have been plenty. Would it have taken more actual writing? Yes. Absolutely. Tracing moral arguments, giving them nuance, keeping them relevant? All difficult. All a ton of work. But better writing. A better story.

It turns what could have been a great story into a string of tired tropes and we deserve better.

There’s another casualty of this lazy storytelling. One that, in the, rightfully outraged scuffle, is going unremarked upon, which, while perhaps not as significant as James Rhodes’ life, is telling in the larger context of Civil War II and in comics in general: last week, in killing James Rhodes, Bendis and Marvel killed one of the only healthy relationships in the history of comics.

The only other one I can think of that even comes close is Green Arrow and Black Canary and DC murdered that one ages ago.

Exaggeration? Consider the competition: Cyclops and Jean. Logan and Jean. Vision and Scarlet Witch. Superman and Lois Lane. Superman and Wonder Woman. Batman and… anyone he’s ever dated. Black Widow and Iron Man. Black Widow and Hawkeye. Jessica Jones and Luke Cage (that one has evolved into something I like, which I’m going to cover in next week’s Padawans, but its origins? Problematic). Hawkman and Hawkgirl. Daredevil and Electra. Daredevil and Karen Page. Daredevil and Black Widow. Hellcat and either of her husbands. Hal Jordan and Sapphire. Guilt, brainwashing, death, resurrection, jealousy, murder…

I think it’s safe to say that the majority of comic book relationships aren’t super healthy.

I’m all for dramatic tension, but seriously.

It is a truth universally known that it’s far more effort to write the nuances of a good relationship and keep people engaged than it is to write the drama and let cliche fill in the blanks.

Carol and Rhodey? They had something special. An equal, adult, relationship in which both parties cared deeply for one another. Deeply enough to sacrifice a measure of their own happiness to ensure their partner’s. Not always with a smile, but willingly and without grudge. Without thought of recompense. Without thought, or implication, of cheating or any other revenge shenanigans.

Two people not only in love but in genuine like and respect. Keeping no secrets “because I wanted to protect you,” or otherwise. Engaging in open and frank discussion. Admitting that neither of them is perfect, that their situation isn’t perfect, but for each, the other is worth the effort.

Carol and Rhodey’s relationship is best summed up by one of my favorite comic pages. Of. All. Time from Kelly Sue DeConnick’s run on Captain Marvel:

Rhodey loves Carol for who she is and he understands asking her to be someone else isn’t right, isn’t fair. Would destroy the essence of the Carol Danvers he adores. He may wish she wouldn’t leave, and he’s honest about that, and he continues to support her (not but. And). Just as Carol wouldn’t ask him to accompany here when she knows Earth, and Tony Stark, need him.

And they’re so adorable, even Black Panther can’t stand it:

It’s gone because Rhodey is gone, yes. It’s gone because whoever is in charge of these things at Marvel made a lazy writing decision. Because killing Rhodey was easier than developing a story and certainly easier than continuing to write the lovely, respectful, nuanced relationship of which we’ve been given tastes over the last several years.

So we’re back to where we were before Carol and Rhodey. Back to the Jean and Scotts, the Daredevil and Electras.

Bummer for you, Marvel, because my expectations have now been raised. Now, I know what I want to see and I’m angry to have it pulled out from under me.

GeekDad Mordechai Luchins, who was kind enough to hash this article’s direction out with me, reminded me of another unfortunate decision Marvel made that it’s now impossible for them to unmake: we didn’t actually get to see Carol and Rhodey together very often.

Plot, sure. She went to space and he stayed behind, then she went to run Alpha Flight and he stayed on Earth. But both of them remind one another several times that, beyond the fact they’re both experienced pilots, he has the suit and she can fly: there’s no reason, especially once she takes over Alpha Flight and is in near Earth orbit, they can’t visit one another with some sort of regularity.

So why don’t they?

Is it because they’re a biracial couple? Not as such. Luke and Jessica have been together for a good long while so clearly, Marvel doesn’t have any hesitation about that aspect to the relationship.

The difference between Carol/Rhodey and Jessica/Luke? The former are a high profile, highly visible power couple while the later are street-level heroes, denizens of Hell’s Kitchen. Not high ranking military officers. Not in contention to be the next president or the head of Alpha Flight. Not on the world stage.

Has Marvel allowed Jessica and Luke to stay together because no one is looking?

People were looking at Carol and Rhodey. People in both their comic universe and our own were starting to notice that things were changing, that we actually had an example of a solid couple, a pairing of equals. And apparently, someone decided that couldn’t stand. Carol and Rhodey could have broken up, I suppose, but I don’t think those of us who have been following them would have bought it. They only way to end their relationship with any believability was for one of them to die and it was never going to be Carol. Not because she’s white or because she’s female, but because of the higher profile nature of the character and the money Marvel is going to make from marketing her movie (and I assure you, I’ll be funding their machine in that regard).

And now, we have Carol and Tony Stark (the epitome of white male privilege) fighting not over ideas or ideals, but about who loved Rhodey more.

When Tony confronts Carol in the hospital after the fight with Thanos, Carol tells him she would do the same thing again, that Rhodey would. She’s right. They had a chance to nail Thanos and Rhodes, always the consummate soldier, agreed to participate in the mission. I think Rhodey would have been okay with the way he died but he’d find the reason pretty reprehensible. For Tony to make his best friend’s death about Tony, to disregard everything Rhodes did and stood for? A device. A lazy device and something no true friend would do. Tony can be devastated. He can grieve. I like that we see him crying over another guy; male emotion is something we don’t see enough of and I respect the inclusion of strong emotions in the book. But what Marvel and Bendis do with those emotions? It’s just as reprehensible as the reason for Rhodey’s death.

(Author’s note: I chose the featured image to avoid spoilers for those who didn’t wish to delve – that’s why it doesn’t feature Rhodes prominently.)

10 Reasons Why Alphas Is Better Than Heroes