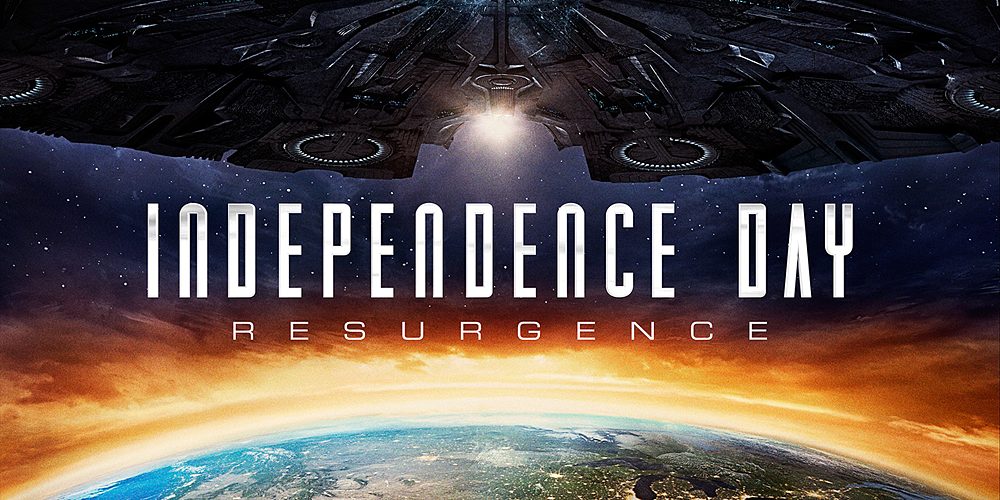 In just a month, Independence Day: Resurgence hits cinemas. It’s been an unbelievable twenty years since the original took the world by storm (yeah, we feel old too) and a lot has happened since then, both to us and to the characters in that universe. If you want to get yourself up to speed before release day, here’s our handy guide to everything Independence Day.

It may seem obvious but there’s really no better starting place to reacquaint yourself with the Independence Day franchise than with the original 1996 movie. Follow the implausible adventures of David Levinson, Captain Stephen Hiller, and President Thomas J. Whitmore as they drop a nuke on Houston, hide out at Area 51, and save the world with a CD-ROM. Nineties sci-fi doesn’t get better than this.

The film is available on YouTube, Vudu, Amazon Video, and iTunes. A newly remastered 20th Anniversary Edition is also out now on Blu-ray and includes an extended cut of the movie. Look out for the 4k Ultra HD Blu-ray, or, if you’re feeling flush, the Ultimate Edition which comes with a collectible booklet and a replica of an alien ship.

Check out the Promo Video

A few weeks ago, 20th Century Fox released “The War of 1996 | A United World News Special,” an in-universe “news special” presented as a look back at events since humanity defeated the alien invaders. This short video introduces some of the main characters who will appear in Independence Day: Resurgence including Liam Hemsworth’s Luke Morrison and Jessie Usher’s Dylan Dubrow-Hiller. The video also gives us a sneak peek into how that world has changed in the last twenty years. As Collider has pointed out, it feels “exactly like the video they would play before an Independence Day theme park ride.” Watch it and see if you agree:

To celebrate the release of Independence Day: Resurgence, Titan has published The Complete Independence Day Omnibus. The volume collects the original movie novelization, plus Silent Zone, and War in The Desert.

The novelization of the original movie is shocking in how dark it seems compared to the movie we know and love. While we all, logically, knew that the fates of anyone left in the cities when the destroyers fired their “primary weapons” would be grisly, the book elaborates in shocking detail. As with all good novelizations, Independence Day fills in many of the blanks that never made the screen, elaborating on details that add a new dimension to the story such as just how Jasmine, Dylan, and Boomer survived the blast hidden inside a tiny maintenance cupboard. Because it is based on the original script, there are a few variations from the film but nothing too significant.

The second book, Silent Zone, acts as a prequel to the first film. Set in the 1970s, it elaborates on the work of Dr. Brackish Okun (Brent Spiner’s hippie scientist) and the other researchers at Area 51 as they attempt to unravel the mysteries of the crashed alien ship recovered at Roswell. The book manages to cram in nearly every UFO conspiracy cliche imaginable: Roswell, nuclear testing, implants, abductions, a secret inner government, “accidents” befalling witnesses… even El Chupacabra and the Watergate scandal manage cameos. In fact, the only thing I didn’t spot was any mention of the Kennedy assassination. The book is filled with the kind of crazy pseudo-science beloved of The X-Files, but it pulls it off with such conviction that feasibility is soon forgotten in the adventure. For fans of UFO conspiracies, this hits every mark.

Finally, War in The Desert takes three very minor characters from the original film–the British pilots seen in the Iraqi desert at a makeshift camp–and gives them an entire novel. Independence Day made out that after the attack, all humans came together as one to unite against a common enemy. This book shows that certainly in the volatile Middle East, this was not the case. The book follows the British pilots in the days following the “defeat” of the city destroyers as the alien survivors take to vicious ground combat. There’s some fascinating insight into alien technology, but the thing at the center of this book is the relationships between the ragtag bunch of soldiers from all nationalities finding a way to work together. Sadly there is an unfortunate case of fridging for one of the few female characters, and the whole thing has an undeniable aura of “in these times of strife, us Westerners will educate these backward Arabic peoples” which makes it difficult to read–having a white British man become in effect the savior of Mecca crosses more lines that I care to count.

Titan has also published Crucible (The Official Prequel Novel to Independence Day Resurgence) this week. Look out for a review on GeekMom soon.

Alongside the books, Titan Comics have also produced a five-issue comic series set in the days after the alien ships were destroyed in July 1996. In this mini-series written by Victor Gischler and illustrated by Steve Scott, an alien ship is spotted crashing into the Atlantic Ocean and a team of marines and scientists from the President’s Advisory Committee are sent down in a nuclear submarine to investigate. They soon discover the aliens haven’t given up and may be planning yet another deadly attack from beneath the waves. The comic series also introduces us to Joshua Adams, a key character in the new film. The five-part series is released as a collected graphic novel under the name Independence Day: Insurgence, Dark Fathom in June.

Titan Comics have also re-released Independence Day: The Original Movie Adaptation which collects Independence Day issues #0-2 which were originally published in 1996. Together the three issues give back stories for most of the major characters in the first film and show us a few incidents we only heard about in the film (including the infamous Levinson-Whitmore punch).

This little known BBC radio drama aired back in 1996 and begins similarly to the famous Orson Welles broadcast of The War of The Worlds, in that it is not entirely clear whether what we are listening to is fact or fiction.

The one-hour drama follows the events of the original movie from a British perspective. The first 25 minutes of the play are presented as “live” radio, with real BBC Radio 1 presenters of the time excitedly telling listeners about the extraterrestrial signals with input from Royal Air Force commanders, and astronomer Patrick Moore as part of “U.F.O. Watch.” As events unfold, news broadcasts from Downing Street are heard along with updates from the RAF. When the ship over London unleashes its weapon, the broadcast suddenly ends. The second half of the play is a more traditional audio movie with original music from the film. It follows some RAF pilots attempting to engage the ships and eventually heading out to the Middle East to join up with other British forces.

The whole thing is hilariously British. On witnessing London being destroyed by the ship, one of the DJs informs listeners that the scene is “truly horrible,” but humor aside, the drama does a good job of showing the events of the original from a British perspective.

Want even more Independence Day? Firstly, don’t forget to pick up your Independence Day Funko Pops. Currently, David Levinson, Captain Steve Hiller, and an alien  (plus a few chase variants) are available from the first movie. Jake Morrison, an Alien Warrior , and a second David Levinson feature in Funko’s Resurgence wave which will be available soon.

You can also pre-order your copy of the official Resurgence novelisation by Alex Irvine which is published on June 21st.

Finally, the soundtrack to the original movie is available on Amazon, iTunes, and via Apple Music, Spotify, and Pandora. Or, if you wanted to really kick it up ’90s style, on compact disc!

Book Review: All Joy and No Fun