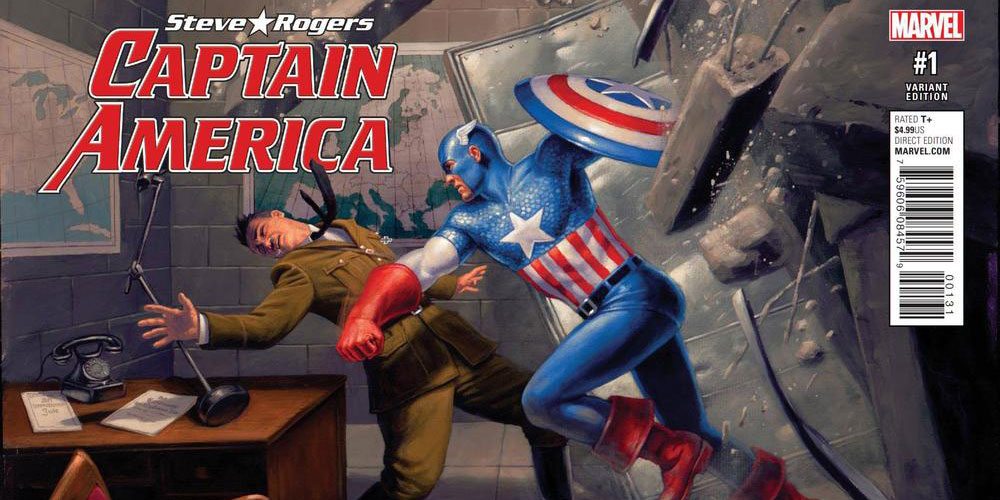 Yesterday was new comic book day, and it was a spoiler-heavy one. Big moments in DC: Rebirth, Transformers, and of course Captain America. The DC spoilers went out on Monday thanks to rumor sites and had died down by the time Wednesday hit. Cap, however, created a news surge. Enough people were talking about the story that Facebook’s Trending function picked it up (spoiling the reveal in the headline – thanks, Mark!) and causing non-comic book readers to issue death threats to the writer.

What was the big reveal? I’m not a big fan of spoilers, but in case you want to know, check back after the image below.

All the way on the last page of the comic, we learn that Captain America is a Hydra agent. This is not a replacement, not a robot, but the same Steve Rogers as we have seen throughout the decades. This is very carefully established via a series of black-and-white flashbacks.

My Facebook feed is full of my fellow Jews, decrying that it is horrible that a character created by two Jews is suddenly a Nazi sleeper agent (because another thing this issue does is continue Marvel’s back-dating of Hydra’s foundation – it used to be a group made by ex-Nazis in the ’60s, now it was always part of the Reich). It’s full of people yelling that Marvel is trying to show white supremacy as cool, somehow. It’s also full of people saying “At the end of the story.”

Yes, it’s revealed on the last page of the comic, page 40. But while this is the last page of the comic book, it is hardly the end of the story. Comic books are largely serial fiction. Stories continue from one month to the next. Assuming a short story-arc, there are still 120 pages to go (although I suspect this will be a six-issue story, not four). This is the equivalent of reading one chapter of a book, seeing that the antagonist is one up on the heroes, and throwing it down. There is a lot more going on here.

So before you freak out, keep that in mind?

Also, for the thousands of non-comics readers reacting to this, here are some quick notes on this.

So really, relax. Either sit back and enjoy the work of a talented writer, or ignore it. It’s true that “no story is just a story,” but the story isn’t finished.

Review – The Flash #68: Tricks and Traps