Nerd Block and ReedPOP recently announced that they would be doing these con specific Nerd Blocks, and despite GeekDad’s previous negative review of Nerd Block, GeekDad’s more recent positive review convinced me to give them a shot.

Did Nerd Block deliver on my hopes? Yes and no. I’m going to start with the negatives because that list is, thankfully, shorter. My biggest problem with this Nerd Block is that they were marketed as limited edition con-specific gear that could be worn to the con. Unfortunately, my box didn’t arrive until two days after the last day of the con. According to UPS, it didn’t even ship from New York until two days before the first day of ECCC. Apparently this was also a problem with the C2E2 boxes so Nerd Block should have worked hard to ensure pre-con delivery as originally promised.

OK, so delivery problem aside, what about the actual content of the box? Based on what I’ve seen on Twitter and Facebook, I wasn’t the only one disappointed that none of the limited edition gear was actually specific to the convention itself. I had expected the shirt to be an actual ECCC shirt, so I didn’t purchase one at the convention for the first time since I started going to ECCC five years ago. If the box had arrived when promised, I at least would have been able to catch this and fix it while I was at the convention.

Now, neither of those negatives are necessarily deal-breakers, but they definitely didn’t live up to my hopes and expectations for the con exclusive box, and it doesn’t seem like I’m the only one. Now, what about the actual gear itself? 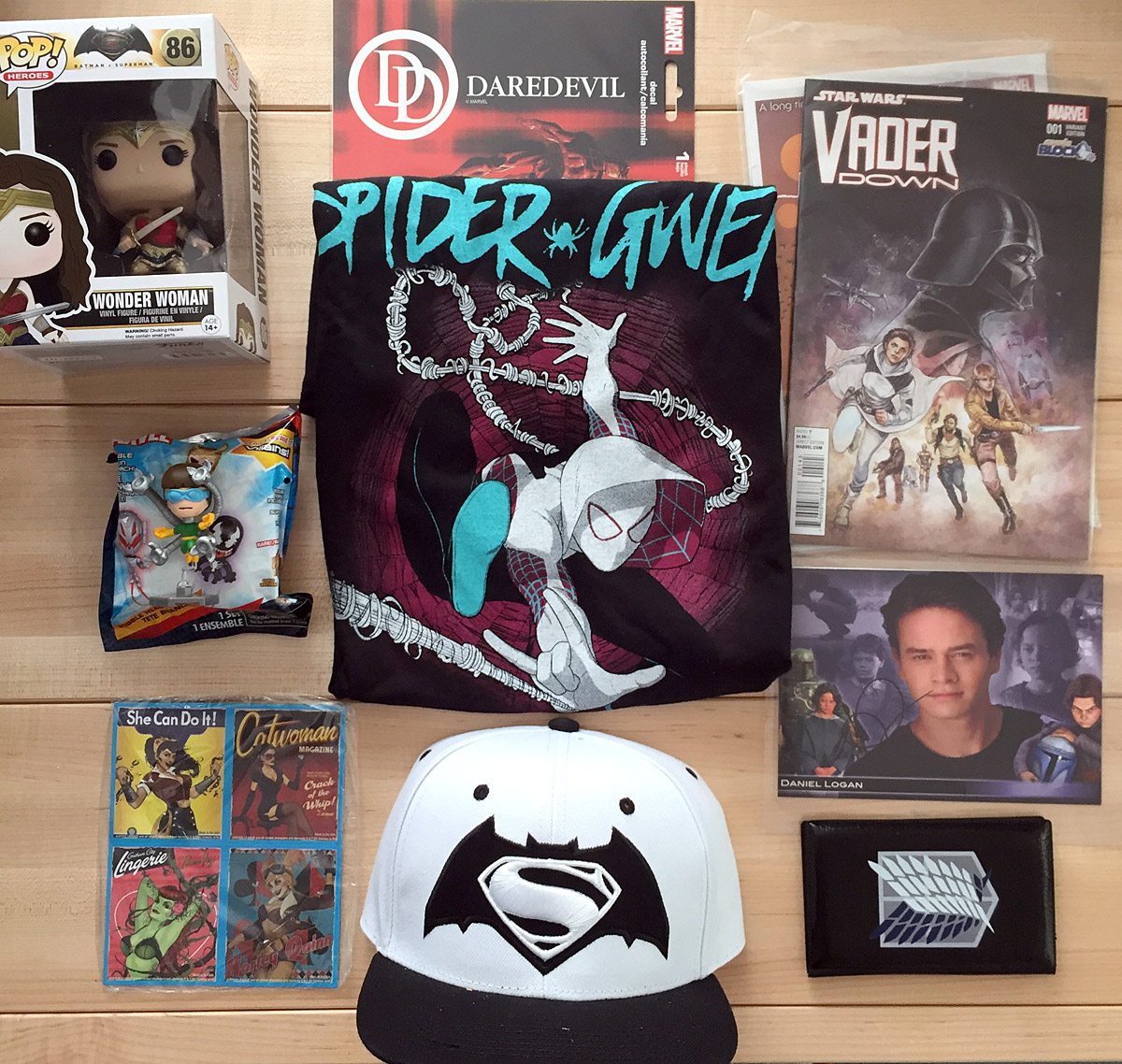 Let’s talk about the shirt first since I complained about it. Although I was disappointed that it was not an ECCC shirt, I actually do really like the shirt. It is a Nerd Block exclusive Spider-Gwen shirt that I will absolutely wear.

A Funko Pop! vinyl figure from Batman V Superman. I got the Wonder Woman figure which is the least BvS of the series. I really like it and will definitely be displaying it on my desk (unless my son steals it from me).

A Batman V Superman baseball cap. It’s BvS, it’s flat-billed, and it’s white. I will not be wearing this. I tried to give it to my son, and he didn’t even like it. For fans of the movie and flat-billed caps, though, this is a really nice quality cap. If it was a franchise I actually enjoyed, I’d definitely be wearing it on a regular basis.

A Marvel Villains mini bobblehead blind bag. I got Doc Oc. With his arms and  “floating” stand, this is a cool little figure. So much so that my son already stole him from me.

A set of four DC Bomshells magnets. These are just flat sheet magnets but they are beautiful. These are definitely going up on the fridge.

Two copies of Marvel Star Wars: Vader Down comic books–the ReedPOP variant and the Comic Block variant covers. I haven’t read this comic yet, so I’ll definitely be cracking it open to do so, but I’m not a big fan of collecting single comics.

A Marvel Daredevil Decal. I like Daredevil enough to watch the show, but I’m probably not going to stick this anywhere. It’s a perfectly fine decal, though.

An autographed photo of Daniel Logan. You’re probably wondering who that is. I know I was. He is the young actor who not only portrayed young Boba Fett in Star Wars II: Attack of the Clones, but he also voiced the same character in Star Wars: The Clone Wars. I’m not much of an autograph collector so this is probably the least appealing item out of the whole lot.

And lastly, an Attack on Titan sticky notes book. While I’ve never watched the show, only the logo on the cover really has anything to do with it. Other than that it is actually a really nice little pack of sticky notes I immediately added to my every day bag.

So how does the price of the box stack up against the value of its contents? Many of these are my best guest at what it would cost to purchase since these are exclusives and can’t be bought normally.

Considering the box only cost $39.99 plus shipping and promised over $90 worth of content, I’d say Nerd Block absolutely delivered. If I had ordered a regular Nerd Block I would have been 100% satisfied with what I had received (despite not necessarily being a fan of some of the items). So I absolutely can recommend Nerd Block for their contents, but they either need to fix the pre-con shipping issue or stop advertising it as such. I think it would also be nice to make it a little clearer that there are no actual con specific items in the boxes.

Did you get one of the con specific boxes? What was your experience like? 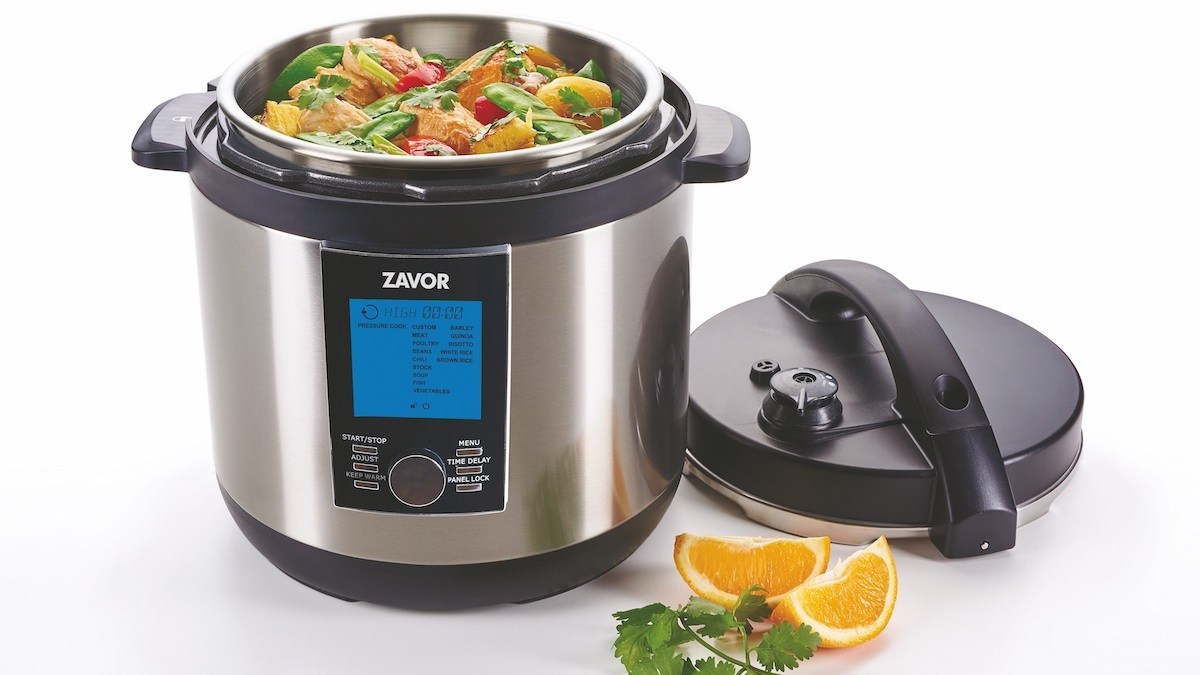 Zavor Under Pressure to Get Big Flavor From a Tiny Kitchen

Review – The Books of Magic #17: A Frozen World 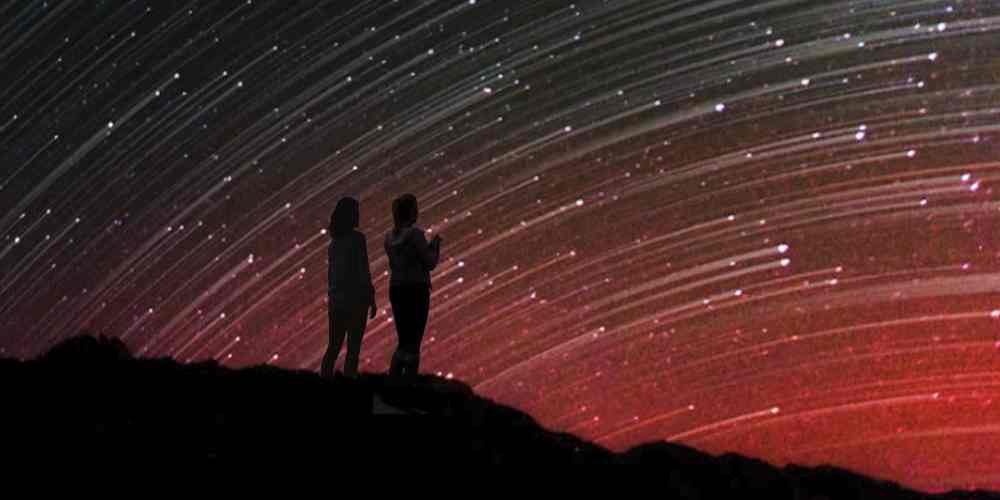 Book Review: ‘A Closed and Common Orbit’ by Becky Chambers