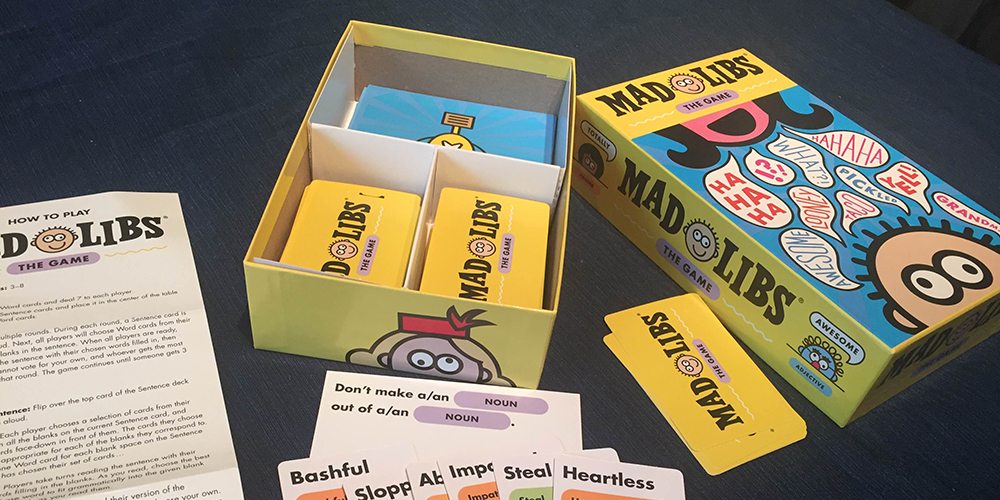 From Looney Labs, available March 31, comes Mad Libs: The Game. Part nostalgia-fix for parents, part educational activity for children, it’s a light game with a short play time. Like Channel A and Apples to Apples, it’s a voting party game that’s really more about the laughter and interaction in the playing than who wins or loses.

Opening the box to actively playing was all of five minutes with my test group of one adult (me), one child (8), and two teenagers (15 and 16). We quickly grasped the mechanics, and found the directions quite clear. Young players will need to be know how to read to be able to play.

You pull a sentence card and place it in the middle. Example: “It was a/an ADJECTIVE mistake, but he ADVERB regretted it forever.” Each player chooses cards from her hand of seven cards to fill in the blanks. If you don’t have a good card to use, you just choose more cards until you do. The cards are helpfully color-coded for folks who don’t really know their parts of speech. Each player reads his resulting sentence aloud, then you vote for the winner. We used the suggested voting mechanic of a countdown and pointing at the person you vote for. The sentence card is awarded to the winning player. The first player to collect three sentence cards wins.

The eight-year-old in our play group is a big Mad Libs fan, and I was as well when I was a child. We often play the Mad Libs app on my phone when we’re stuck waiting somewhere and laugh our word-nerd hearts out.

We played two full games of this edition in cards in the space of about thirty minutes.

It was a moderate hit. We laughed a bit, but not uproariously. The youngest player laughed the most. Working with the limited vocabulary set provided by the cards will quickly run you through all the options. We only played two games and already hit repeats of words.

This game didn’t really capture the silly fun I’ve always associated with Mad Libs, perhaps because the word choices are absolutely safe and without innuendo. In fact, they’re even free of childish potty humor words like “fart” or “toenail” that always use to crack me up when I was a child.

My family has several games of this category, so it would take something innovative or thematically unique to make into our permanent collection. This game might better appeal to people new to the genre. It could be a good choice when playing with a mixed group where potential offense might be an issue.

There are a few “make your own” cards that could liven up the game a bit for players who are adept enough with grammar to develop their own cards.

Perhaps the loss of the random element of free association for the word choices means that Mad Libs simply does not transfer well into a card game.