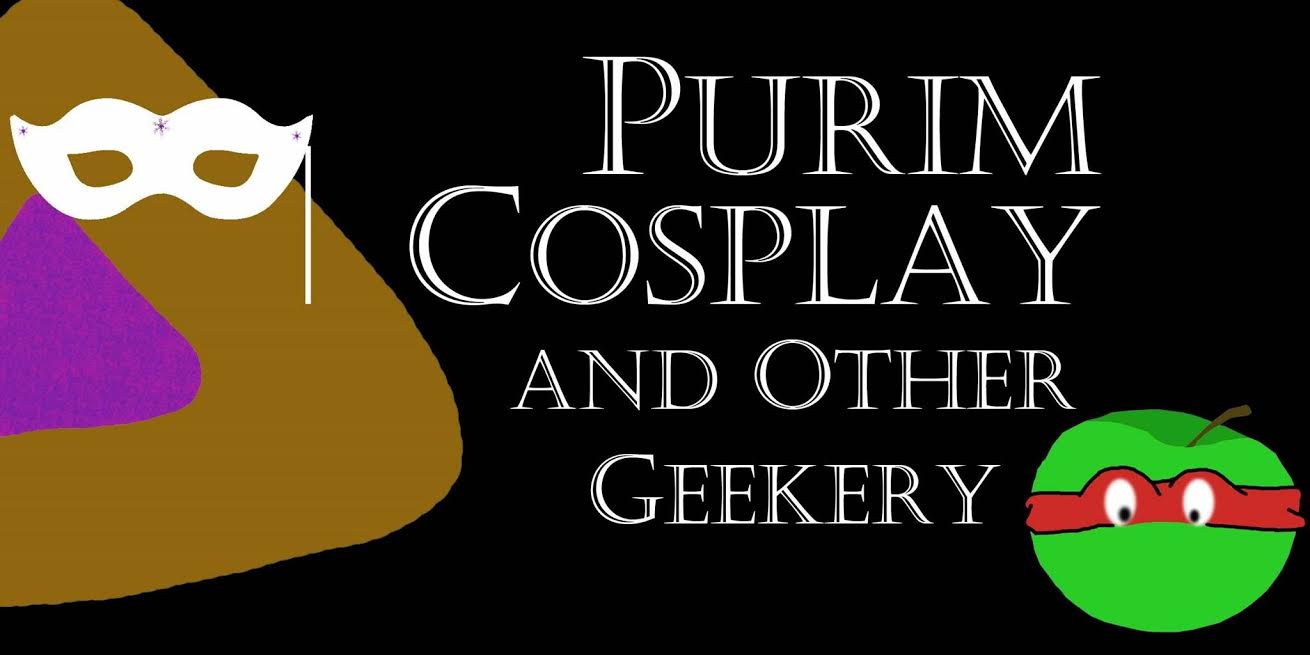 The festival of Purim falls on the night of March 23rd this year (Jewish holidays start at sundown; technically all days do, but that’s another kettle of fish). Like almost all Jewish holidays, there are lots of unique rituals and specific food customs, but, of all the holidays, this one may be the geekiest. It’s certainly the easiest one to let your geek flag fly. GeekDad Mordechai Luchins and GeekMom Dani Weiss-Bronstein have teamed up for some examples of how.

Mordechai: Arguably the geekiest part of Purim is the costumes. It is traditional to dress up. Some stick to the protagonists (or antagonists) of the Book of Esther, the text the holiday is based around (and where my name comes from), but you can do so much more. My daughter is using it this year to beta-test her Liv Moore (iZombie) cosplay. My son is a little less into the costume aspect… but that’s because he wears a shirt with a cape as his go-to outfit.

One of my friends goes so far as to make “Purim Videos” every year. You can see them all here, but check this one out for an example:

Dani: We like to do family themes. We kind of fell into it one year when my older daughter was Grover and the baby was Yoda and I noticed we had a theme to their costumes. Since then we’ve done the world of Superman (Supes, Lois, Wonder Woman, Supergirl, and Batman), X-Men (Wolverine, Rogue, Storm, Jean, and Gambit), music (Stevie Nicks, country, glam rock, folk rock, and punk rock), and the Incredibles. The hardest part is finding someone everyone in the family is willing to do with enough characters that they don’t overlap. But I love it. Although I have to start sewing my costume at some point.

Mordechai: Another tradition on Purim is to give gifts of food. They are supposed to contain at least two “types”–as in food you’d make two different blessings on. A lot of people do themes. And oh, the geeky themes you can do. Personally, I’m working up the courage to go full Whovian with a Doctor Who theme–a blue box containing fish fingers (fish sticks) and custard (maybe some jelly babies for good measure). These days I keep it basic and do milk and cookies–although even then I use a theme.

Dani: So this is where our theme comes to life! Between the hokey jokes with the food and the cards I design, Mishloach Manot (that’s the full term) are pretty much up to me. Last year I hand-lettered labels in different comic book fonts. Why? Because I can. Because I get to be creative and geeky and share it with people. And I’m really excited for the set I’m working on this year! A traditional Purim snack is Hamantaschen, which are filled triangular cookies. We’ve done the standard jam, fluffernutters, chocolate, and PB, and I’m holding out hope for a key lime pie version this year.

Mordechai: Another tradition of the day is to give charity. This, sadly, gets a lot less focus than the first two–likely because it’s not flashy. But you can give in a geeky manner too. How?

The Hero Initiative –formerly known as ACTOR–“A Commitment to Our Roots.” This great charity helps older comic book creators who are in dire straits.

Child’s Play was founded by the creators of the Penny Arcade web comic. Meant to show that gamers are more than just a bunch of basement trolls, shouting obscenities at each other, they’ve collected more than $40 million from 2003-2015. The charity buys toys for kids in hospitals all over the world.

Those are just two off the top of my head.

Dani: We like to give to a charity that helps feed the poor. In fact, in lieu of making Mishloach Manot for all of our friends, we usually spend a few hundred dollars donating to charities we support such as Leket Israel, which rescues food from restaurants, caterers, and farmers to feed the poor, and Masbia, a kosher soup kitchen in Brooklyn which serves the greater Brooklyn community. They provide cards that you can email or snail mail out to friends. I love that for multiple reasons: we’re donating to an important cause, we’re easing up on the craziness of making a ton of complicated treats, and we’re giving the charities we support exposure.

We also donate money locally to be distributed to those in need. It is easily the most important part of the holiday, but like Mordechai says, it gets lost in the fun of the rest of it. Sending and receiving cards helps re-emphasize the charitable portion of the day, so I’m really a big fan.

Mordechai: So, that’s our geeky Purim. How about you guys? Any geeky plans from the Jews in the room?

An Anthropologist Asks Why We Play Ball