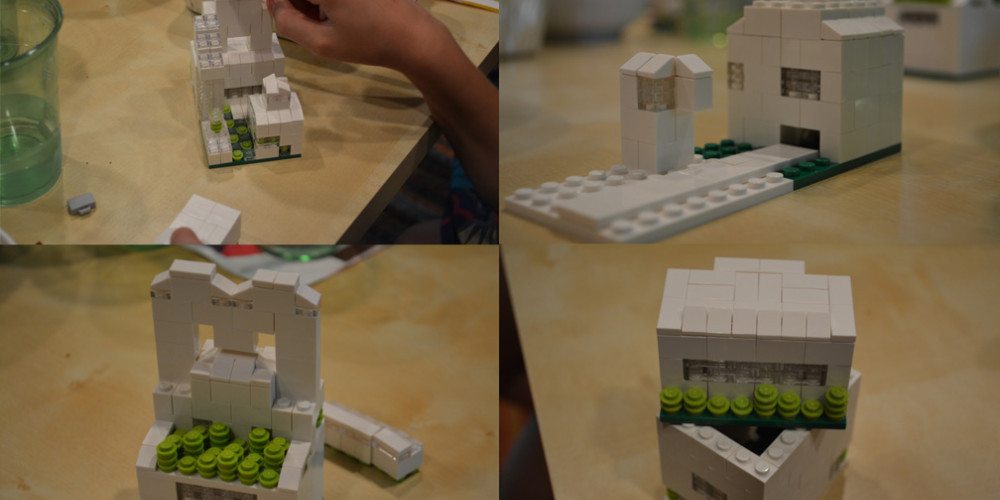 When my daughter O was in preschool, we hosted an annual gingerbread house-making party for friends every December. We experimented with different pre-made kits, but the mini village with pieces that the kids could remix into freestyle builds was always the hands-down favorite. They worked for hours, swapping parts and suggestions. By late afternoon, everyone had created their own candy-plastered, gravity-defying structure cemented into place with royal icing.

As O moved through elementary school, her passion for building grew. Sticks, Lego bricks, wooden blocks, and random recyclables were commandeered for an endless series of fantastical projects. Meanwhile, though, most of her girlfriends discovered other interests. So, we decided to retool our gingerbread gathering and the “community build” was born.

The idea was to convene a small group of construction-minded kids to experiment, exchange ideas, and inspire each other a few times a year. The format was simple: theme, inspiration materials, supplies, and lots of creative freedom.

Our community builds weren’t fancy. They were just a way to support my daughter’s interest and help her connect with other kids. O dreamed up the themes, developed the supply lists, and chose most of the inspiration resources. We reached out to friends who were game and gave it a shot.

Parents were thrilled to have messes made in someone else’s house and the kids had a blast together. O said that sharing ideas with friends who were into building pushed her to think differently and be more creative. And, they laughed at each other’s crazy jokes.

Here are a few of our favorite community builds:

A hike around the Grand Canyon of Yellowstone inspired the theme for O’s 7th birthday party and inaugural community build.

Lessons learned: Yes, it is ridiculous to purchase stones, pine cones, and twigs. (Our supplies came from the floral and woodworking departments at Michael’s.) This is how I rationalized it:

2) Eliminates the need to risk prosecution for illegal removal of natural resources from local parkland.

3) Parents are more likely to allow a clean-looking work product in the house.

O wanted a Lego open build. I wanted to keep the budget reasonable. So, she proposed that we go micro-scale: “In Lego, there is this idea of ‘micro-building.’ Sometimes, you don’t have enough of the bricks you need to build a full-scale model. But with micro-scale, you can make an entire city with fewer bricks.” Done.

Lessons Learned: To amass supplies, we hit up the Pick a Brick wall at our local Lego store and ordered the rest online. Once all the bricks had arrived, O and I divvied them up so that each builder would have her own materials to start with and trade.

Once they had a few community builds under their belts, the crew lost their taste for gingerbread. So, we switched to an amped-up holiday activity: circuits!

Lessons Learned: O got a kick out of seeing how the kit had been improved from the original, which we’d purchased a year or two before. Upgrades included perforated forms (no mat knife needed!) and a reconfigured circuit map, making the project easier for kids to tackle on their own.

Based on prior experience, we purchased one kit (two houses) per child in case of faulty components or the need for a do-over, which made for a particularly pricey community build.

Were all the builds a success? Absolutely not. The 3D LED Christmas Tree stands out as a particularly unfortunate choice. We had one soldering iron to share and there were too many components to be soldered into place to hold the kids’ attention. Instead, they raided the playroom shelves and got to work with littleBits and Snap Circuits. It all worked out.

The best builds were open-ended. However, we did go with a kit for the LED houses because it made sourcing materials easier for a rookie like me. In most cases, adult supervision was minimal. Occasionally, we’d help the youngest kids with the soldering iron or hot glue gun, but the older kids would usually help out instead.

If you’ve got a kid who likes to invent or build cool stuff, consider the community build. If you don’t want to wing it, there are a number of helpful resources online to get you started. Two to check out: Google Maker Camp and the Fundamentals of Tinkering List from the tinkering studioTM Coursera course, “Tinkering Fundamentals: A Constructivist Approach to STEM Learning.” Good luck!