Most of my Stack Overflow columns focus on recent books (well, within the past couple of years) but there are plenty of older stories that are fantastic. Today’s stack are old stories that have been reprinted (or gotten new editions), so they’re a little easier to find than the originals. 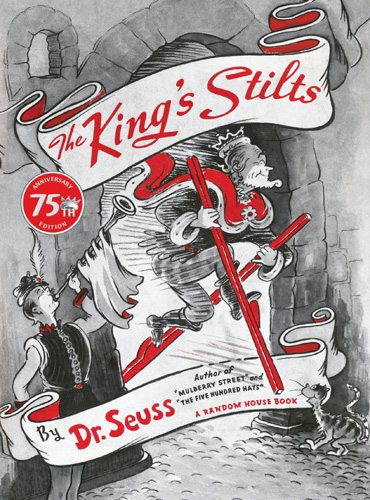 The King’s Stilts by Dr. Seuss

This one’s originally from 1939, and got a 75th anniversary edition a couple years ago. It’s not one I was familiar with, so it was exciting to see a new-to-me Dr. Seuss story after all these years of reading Dr. Seuss’s ABCs and There’s a Wocket in My Pocket! (I’ve got three kids, so we’ve been through that routine several times over.) The King’s Stilts is an elaborate tale about King Birtram, who lives on an island that is threatened by flooding from the sea. And when he’s done with his hard work, he loves to run around on his stilts–sure, it looks undignified, but he’s having fun and nobody minds.

Well, except for Lord Droon, who hates fun. One day he steals the stilts and has them buried deep in the forest to get King Birtram to act more like a king. This leads to a chain reaction of negative consequences … will the kingdom be saved? It’s a long-ish story (for Dr. Seuss), told in prose instead of rhymes, but as always has a healthy mixture of the absurd and the sublime. The illustrations are in mostly black and white, with some red spot colors to highlight things like the stilts themselves. 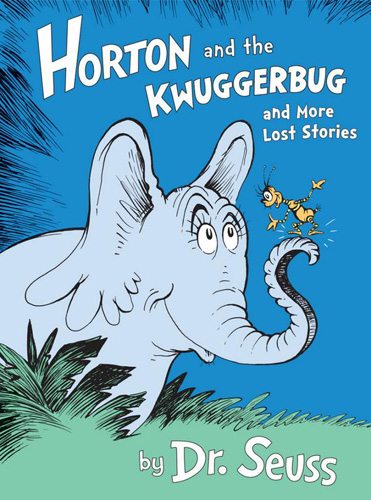 Horton and the Kwuggerbug and More Lost Stories by Dr. Seuss

This book is a collection of four old Dr. Seuss tales–but ones that you may not have seen before, because they were published in Redbook magazine in the 1950s (in a slightly different form) and never in book form. There’s an introduction at the beginning of the book that you’ll find fascinating (but your kids won’t care about). The title story is about Horton the elephant and a crafty bug who wants help fetching Beezlenuts, and poor Horton once again suffers through a lot of indignities because he keeps his promises. “Marco Comes Late” is another (shorter) tale about some happenings on Mulberry Street that made Marco late to school. “How Officer Pat Saved the Whole Town” is a very fun hypothetical string of occurrences that Officer Pat prevents from happening thanks to his quick thinking. Finally, “The Hoobub and the Grinch” is a very short tale about, well, marketing. The Grinch is trying to sell the Hoobub on a piece of green string, reflecting Dr. Seuss’s own attitudes about his history in advertising.

All of these stories are in rhyming verse. If you like Dr. Seuss (and, come on, who doesn’t?), this is a fun collection of some new old stories to add to your read-aloud rotation. 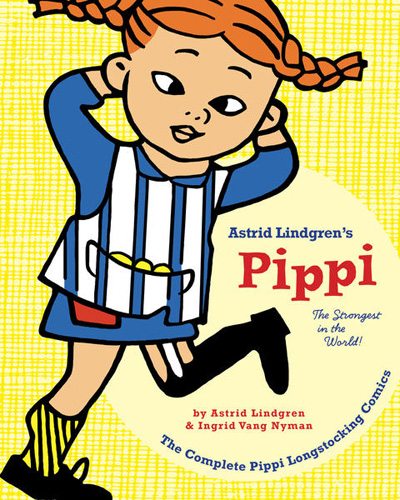 Pippi Longstocking: The Strongest in the World! by Astrid Lindgren, illustrated by ingrid Vang Nyman

I actually don’t know a lot about Pippi Longstocking other than the red pigtails and that there are a couple kids’ books about her … but this is actually a comic book! There were a series of comics that had never been published in North America, and now Drawn & Quarterly has this collection of them, newly translated into English by Tiina Nunnally. Pippi is this mysterious little girl who shows up in an abandoned house on her own–and she’s incredibly strong. This collection is nearly 150 pages of short comics vignettes, and a new way to get acquainted with Pippi. 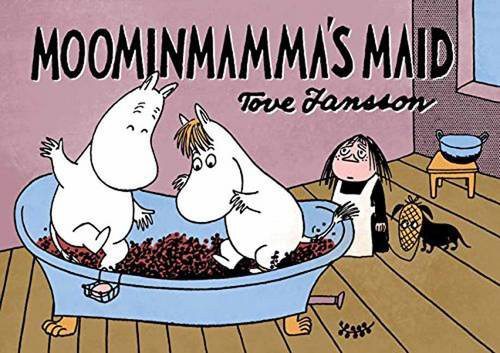 The Moomins are from a comic strip in the 1950s, and they’re these strange hippo-looking creatures who have their own way of life–in this series, they’re not really too great at housekeeping. Their neighbor, Mrs. Fillyjonk, suggests they get a maid, so they do–but she’s pretty terrible at it and hates herself for it. Meanwhile, the Moomins don’t even care when she breaks things or spills things. It’s a very odd book and celebrates the art of being carefree. The character Misabel (and her dog Pimple) seem to be suffering from depression and the jokes often revolve around their low self-esteem, so the book does seem a bit insensitive for modern times. On the other hand, the lessons the Moomins are teaching about not worrying so much may be a much-needed antidote for us today, too. 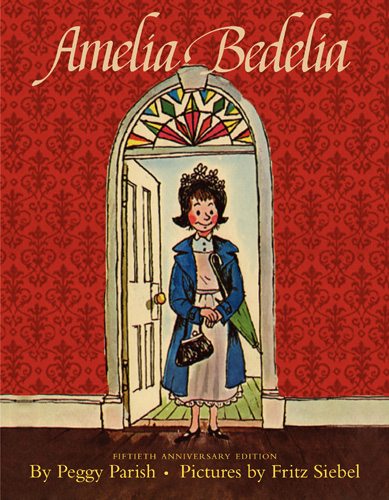 So, I missed Amelia Bedelia’s 50th birthday a couple years ago (sorry, Amelia!) but this is an anniversary edition of the original book. I remember reading Amelia Bedelia stories as a kid, and my own kids have enjoyed them, too. I loved the silly results of her habit of taking everything completely literally, and the illustrations are delightful. There’s a newer series of Amelia Bedelia books out now (with Amelia as a young girl) but I don’t think they quite capture the whimsy and fun of the original. 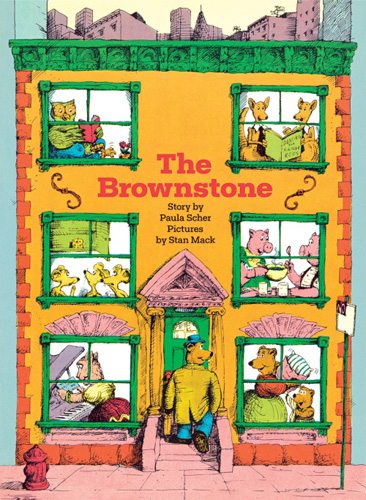 The Brownstone by Paula Scher, illustrated by Stan Mack

The Brownstone features a small apartment building with several animal families living in it. But when the bears need to get to sleep, they’re bothered by Miss Cat’s singing next door. Mr. Owl, the landlord, does his best to rearrange the families, but each time somebody is unhappy. It’s a funny book that reminds me of a logic puzzle. The kangaroos want to dance, the pigs want to eat supper, Mr. Owl wants to read … how do you arrange them so that everyone is satisfied? (Oh, and The Brownstone 43 years old this year.) 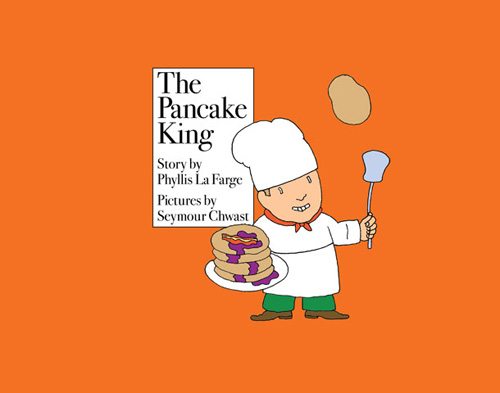 This book is a relative newcomer, at only 35 years old, and it was another new one to me. Henry Edgewood wakes up one morning wanting pancakes for breakfast, lunch, and dinner. Pretty soon he’s making pancakes all the time, and becomes the Pancake King, achieving fame and fortune … until he gets tired of it. It’s kind of a fascinating book about doing what you love, but also doing things for the right reasons. 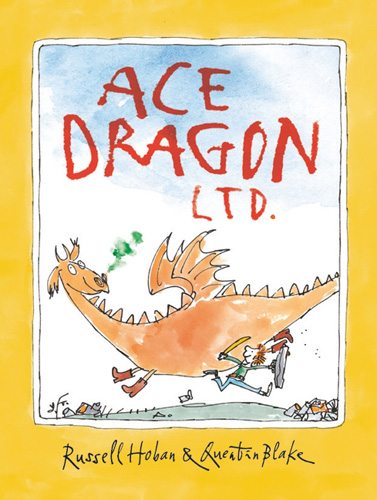 I guess you could call Ace Dragon Ltd. a Gen Xer, like many of us, because it was born in 1980. A boy named John discovers a manhole labeled “Ace Dragon Ltd.,” and meets a dragon named Ace–who’s limited because he can’t do everything, just some things. After John bests Ace in a fight, Ace takes him flying and they have a brief, odd adventure. The story is cute and silly, and the drawings are perfectly suited to the tale.