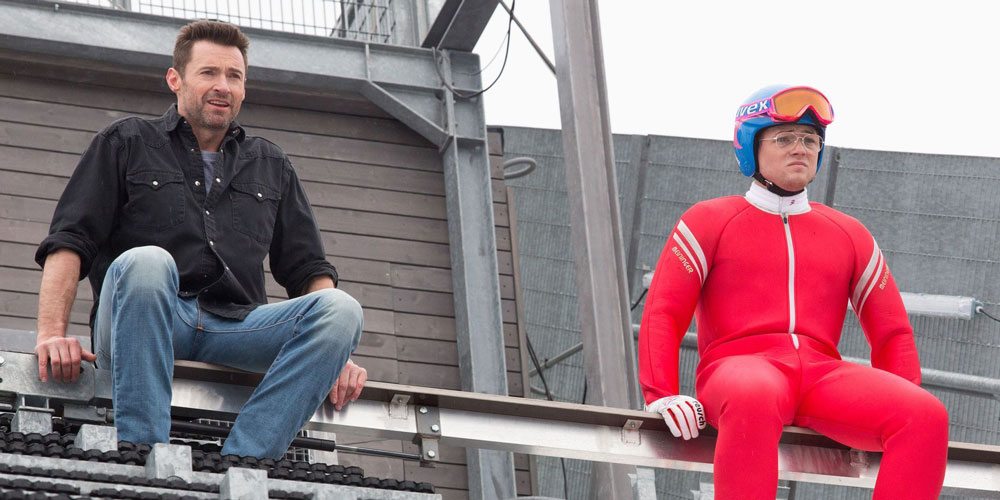 Feel-good sports biopic Eddie the Eagle opened in theaters this weekend. Is it worth seeing? Should you take the kids? I’ll break it all down for you below.

The movie is, as the opening credits state, “based on the life of Eddie Edwards, a young man who doggedly pursued his life-long dream of competing in the Olympics, despite a lack of training, money, or even skill.

I’ll be honest that I’m not exactly a huge fan of the Olympics and had never heard of Eddie the Eagle before the promotional campaign for the movie began. However, after seeing the movie I read Eddie’s Wikipedia page. Assuming that that is relatively accurate, then it’s safe to say that the movie took a lot of liberties with the story.

The MPAA, in its ever-lasting prudishness, gave the movie a PG-13 rating for “some suggestive material, partial nudity, and smoking.” Before looking that up, I figured the movie would have been at least a PG, but only for a single scene, when Hugh Jackman, who plays the reluctant coach Eddie coerces into helping him, tries to describe the process of jumping by relating it to imaging having sex with Bo Derek. (The movie is set in 1987 and 1988.) There’s also a moment when a woman offers to allow Eddie to stay at her place and asks if she can “join” him every now and then (an offer he refuses.)

The partial nudity bit surprised me, but the bigger surprise is that I still find this kind of ridiculousness from the MPAA surprising.There’s a single scene where Eddie walks into a sauna where the Norwegian team is relaxing. All of the members of the team–all men–are nude, but there’s absolutely nothing shown beyond chests and legs. Sigh.

Smoking? Well, yeah. I’m not sure there’s a moment where Hugh Jackman isn’t shown with a cigarette in his mouth. Here at least I understand the MPAA’s reasoning on trying to crack down on that, but again, the movie is set in 1987, so it was totally appropriate for both the time and the character.

There’s no bad language in the movie at all.

4. Should you take your kids?

I wouldn’t hesitate to take my 10 and 13 year olds. I wouldn’t have hesitated to take them when they were younger, either. If ratings are your primary guide, let me assure you that there are PG movies out there that will expose your kids to far worse than they’ll see in Eddie.

I’d guess that they probably would. It’s a very paint-by-numbers sports biopic, which is say that there’s a nice mixture of action, story, and of course training montages. It might also encourage your kids to not get into ski jumping, so there’s that added bonus.

The movie isn’t without its flaws, but if you’re able to overlook some questionable special effects (a few of the “agony of defeat” moments looked very CGI) and an even more questionable cameo by a certain Very Big Name actor, you’ll probably enjoy it well enough. It absolutely never deviates from the standard sports movie formula, so you can guess what will happen in every moment of the film, but you can’t really expect much else from this kind of movie.

One of the more interesting decisions the producers made was to create a movie that not only took place in 1987, but also sounded like it was made in 1987. While I won’t be rushing out to buy the soundtrack, I did appreciate that the music really helped set the movie in the time period.

8. Is it worth seeing the theater or should I wait until I can stream it?

I’m always a fan of seeing movies the way they were meant to be seen, but this is one that probably won’t lose anything on a smaller screen. There are a few big, wide shots from the tops of ski jump platforms, but losing the big sense of those won’t impact your enjoyment of the movie too much.