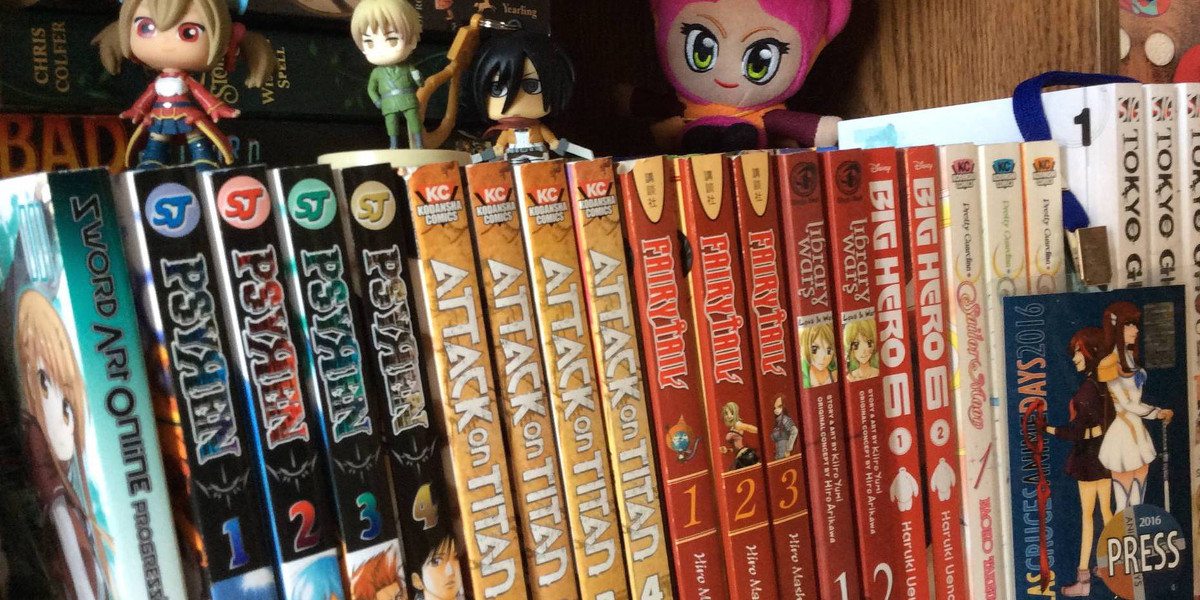 Two years ago, we dragged two daughters along to cover Las Cruces Anime Days at New Mexico State University. They enjoyed it, but granted none of us really knew that much about Manga or Anime.

This year, we took one daughter and one over-the-top Manga-loving enthusiast to that same event. My younger daughter still enjoyed herself, but my teen Manga-nut was in Hog Heaven. What a change two years make.

I was curious what created this Manga Monster. I mean, we’re a family of readers and self-admitted geeks, so she has learned much about books, comics, music and more from us. But, Manga? Honestly, I never got into it, beyond my Batmanga collection, a series based on Jim Henson’s Labyrinth, and a fantastic collection of Matrix-inspired shorts, called Animatrix.

Our last schooling on Manga and Anime was in college, when a friend of ours, who was an incredible artist in his own right, tried to explain why the animated film based on Katsuhiro Otomo’s comic, Akira, was the “best animated film ever.”

“And, they didn’t draw the teenagers to look like young adults,” he pointed out enthusiastically. “They look like actual teens. The whole thing is just amazing, you gotta see it.”

At the time, however, we didn’t get it, and Anime movies and literature never became a regular pursuit.

My daughter, however, has amassed an entire bookshelf of Manga ranging from all ages Disney-based series like Big Hero 6 and Kingdom Hearts, to the well-known Sailor Moon, and the edgier Attack on Titan, the latter of which I was at first admittedly reluctant to let her read. Posters of Final Fantasy and cyber pop star Hatsune Miku are popping up on her wall, and little figures of Hetalia line her work desk. She still maintains her other “fandoms,” (Super-Who-Lock isn’t going anywhere) but there’s no overlooking the slow and welcome Manga immigration into her life.

I have always known Manga was popular. I’ve heard there are around 10,000 Manga titles and compilations published each year (I can’t verify those numbers, but I bet that’s pretty close). I know there are all types or Manga and Anime from family friendly titles to adult only reads, and everything in between. I know it’s a booming industry. I just wasn’t sure why.

I asked the closest expert source I knew, my Manga nut daughter, whose reply was simply “Mom, it’s just awesome,” she said. “That’s why.”

She first started catching the Manga bug in seventh grade, when a friend turned her on to the Tokyo Ghoul, but she said she really discovered most of her favorite titles on her own, including Sailor Moon, Fairy Tail and Sword Art Online.

“They’re fun to read, and I like that the stories are so different from anything else,” she said. “I think a lot of kids at school who say they aren’t into it, really are. If they don’t like it, they are reading the wrong stuff.”

When we told her we were planning on getting some pictures at Anime Days, her newfound love of the genre was more pronounced. She had already started prepping her look a week in advance, and told me she wanted to be a character I had never heard of, named Dave from the web comic with Manga following, Homestuck. It was simple. Black jeans, Converse and dark glasses. Her red-and-white baseball shirt only needed an iron-on. Boom. Done for less than $15.

When we got to the event, she fit right in, as many of the cosplays were that simple. That didn’t mean there weren’t elaborate costumes, and meticulously crafted oversized foam weaponry. Las Cruces Anime Days also were filled with gaming tournaments, trivia and informational panels, a Manga-themed murder mystery, magic show, and masquerade dance. There was even a Manga themed tea, courtesy of a group called Kirei Cosplay Café, based in Albuquerque. The line to see the costume contest wrapped around the walls of the student union halls. In short, it was pretty successful.

The event’s guest of honor, voice actor David Vincent, has a long list of Anime cred, voicing roles in series and games like Kill la Kill, Super Smash Brothers, Bleach, Fire Emblem, Gun x Sword and several more. I’ve always liked voice actors. Despite the fact they have a group of fans, and Vincent certainly did, they haven’t developed that standoffish ego some people who have spent too much time in front of the camera might. He told his audience in one question and answer session he couldn’t think of anyone in voice acting arena he doesn’t like to work with.

“You can’t be in this business and be a jerk,” Vincent said. “There’s just too much competition.”

He also held a really fun audience participation panel on the dynamics of voice acting that we all ended up enjoying much more than I thought we would. I also learned quite a bit. Who knew that all-purpose guttural sound found in most animated shows is known as the “Standard 102?” Well, I do, now.

I asked him later what his thoughts were on Manga’s current popularity explosion.

“I think it’s generational,” he said. “The younger generations right now are just gaga for it.”

One reason, he felt, was the storytelling in many Manga and Anime series is just so well done.

He said he has personally seen this rise in popularity from his own fans, and really appreciates their appreciation for what he does. One example, he noticed, was when he was helping his wife with her volunteer work with the Boys and Girls Club.

“A couple of years ago, there may have been one or two kids who knew what Manga was, but now there are a bunch of them who recognize me or the shows I am in, and they just love it,” he said.

Really, what I noticed, like with every fandom-specific convention, was a sense of community. However, Manga just seems to cover more than just a few popular characters, most of which I couldn’t even start to name if you held a ray gun to my head.

The thing is, you don’t have to know any of these names in order to be welcomed into this fold. You just have to be willing to enjoy yourself. This attitude matters to me. My daughter is going through the bumpy transition from tween to teen all 13-year-olds do. If I recall, it isn’t pretty. It isn’t pretty at all. Fitting in, body changes, and the tendency for teens to want to grow up way, way too fast, is a horrifying experience. This tendency from some classmates has been leaving my daughter, who was perfectly happy to be a kid, thank you, feeling a little left out of the “loop.”

She is noticing boys, and has her fan crushes, but actual dating isn’t even on her radar. She has better things to do, like read, draw, play card games and Assassin’s Creed, maintain her geeky fashions board on Polyvore and be, of all things, outside playing with the dog or teaching her littler sister how to ride a scooter. She’s been called everything from “immature” to “weird” from some of the adolescent supermodels in the making. Yes, we do remind her how these opinions don’t matter, but let’s be honest. They do hurt, right or wrong.

Through Manga, however, she has discovered friends coming out of the woodwork. Others who may recognize the emblem for the Survey Corps, or who can name Pokemon characters beyond Pikachu. These little connections can mean so much to an eighth grader.

As far as growing up, the college and senior high crowds at Las Cruces Anime Days, many of whom spent meticulous time on group and individual costumes and props, not only gave her a sense of relief she wasn’t being “immature,” but gave her a twinge of anticipation for the future. If this is what growing up for some people means, she must be doing it right, or at least as “right” as anyone else.

I never steered my daughter towards Manga, but I’m thankful she has found it. I’m thankful that it has found so many others who are both celebrating individuality and finding niches through this stylized world of fantasy, adventure, science fiction, and just plain good storytelling.

During the convention, we were walking past one crowd of twenty-something fans, who were talking about a favorite show when they spotted my daughter in full costume.

“Oh, hey, there’s a Dave,” one said with excitement.

My daughter just swaggered on with a tiny little smirk on her face.

Having Fun with Toilet Talk

6 thoughts on “Why Does Manga Mean So Much to My Kid?”