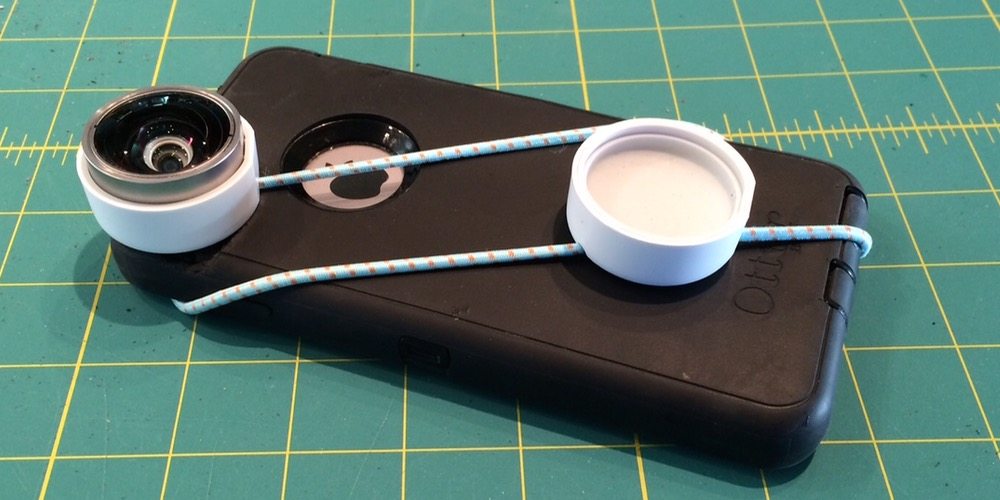 The professional grade optical quality Photojojo Iris lenses are available for iPhone 6/6+, 6s/6s+, and Samsung S5 and S6. I loved the pictures I could take on my iPhone 6+ with the Photojojo Iris lens set, but the lenses would not mount on my over-the-top-protection Otterbox Defender series case. I used a second, less protective case with the Photojojo, and it worked great, but this left me worried throughout the entire photo shoot that I was going to drop and break my phone. If you’re not the type to put battle armor on your phone on a daily basis, then you’ll have no qualms about using the Photojojo Iris with your case, or with no case if that’s how you roll. For me, however, I planned to keep my iPhone safely locked away in the Otterbox, but also wanted to be able to quickly mount any of the Photojojo lenses.

This meant I was going to have to modify the Otterbox. For experimenting, I found what appeared to be a genuine Otterbox Defender on eBay for around $20. Once that was in hand, I set it aside and started modifications on my old, beat up, Otterbox.

The way the lenses mount is by putting a lens plate inside the case. This provides a peg that the lens is inserted on, with the Photojojo elastic strap wrapped around the phone to help secure it. This works great if done with a case that is not too thick such as the one in the images below.

The problem with the Otterbox Defender is that the peg does not clear the case so the lenses cannot be mounted. The case is simply too thick.

Another issue is that the lens plate makes it pretty difficult to close the case completely due to the added thickness. This was not a problem with the non-Otterbox case. To alleviate that problem as well as lessen some of the thickness, I removed the soft inner cushion where the lens plate fits in the case.

I gained a millimeter, but the peg was still not far enough out to affix the lens. This left the task of getting enough peg sticking out of the back of the Otterbox to hold the lens. There are two parts of the case that have to be reduced to do this. First, the black hard plastic ridge around the camera opening needs to be lower. Second, the rubber case needs to be lowered to match the now lower hard plastic ridge. This has to be done everywhere the lens makes contact with the case.

A Dremel or belt sander would help make quick work of this, but I just sanded by hand with 80 grit sandpaper, using finer sandpaper to smooth out my work later.

My original intent was to remove just enough of the ridge and rubber case to hold the lens secure. It appeared as if I would have to go extremely thin on the rubber to do this. Maybe with a Dremel or other method I could have. The picture below shows my attempt at just thinning the case. You may have better luck, but I was not happy with that result.

Do not do this if you end up removing all of the ridge and the rubber section like I finally did. Just cutting the rubber off will have a better end result than the remnants of my sanding attempts.

What I finally did was sand the hard plastic ridge down flush with the phone. This still leaves a pretty big lip of protection around the camera while allowing quite a bit of the Photojojo mounting peg to stick up. This means I then had to cut the rubber case all the way off where the lens hits so that it could sit flush with the phone.

Now that it’s been adjusted to work with the Otterbox Defender, be sure to remeasure and set the Photojojo mount to the correct setting per the Photojojo Iris instructions.

One issue I discussed in my original review was that the flash was useless with the lens plate in as the light refracted through the clear plate and washed out the image. I rarely use my flash anyways when taking a regular photo as the pictures are almost always better without a flash. So I only use a flash when I absolutely need to. I do, however, often use the flash when I am taking a picture of a serial number I need to enlarge to be able to read, or if I am trying to get the model number I can’t read off of a piece of equipment by reaching behind it to take a picture for instance. So, I want the flash somewhat operational.

Another mod I tried was painting portions of the lens plate black to allow the light to come through while not washing out the picture.

While it’s not pretty, this case-mod keeps my iPhone safe and secure in the super-tough Otterbox Defender while allowing me to quickly attach the high-quality Photojojo Iris. Now that I can use them, I will be carrying the Photojojo lenses everywhere. They pack up nicely to go in a pocket or, more likely, my computer bag.

Now that I’ve done this once and know how I would go about it, I may use the new rubber case cover and make a cleaner version.

I would love to hear from anyone with other ideas for making this modification.