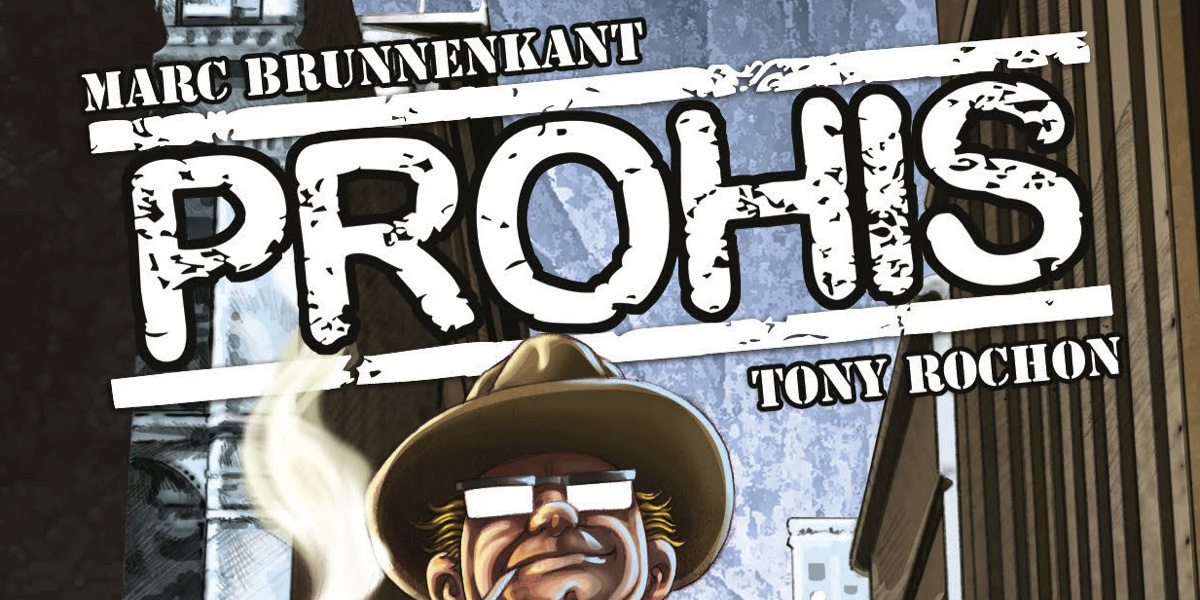 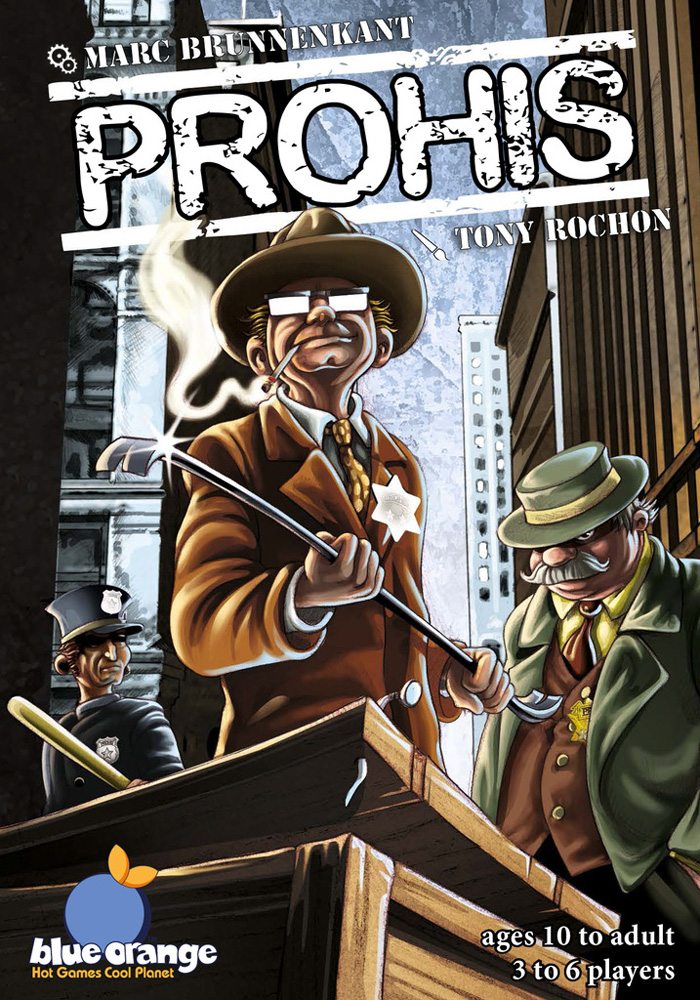 In any place where certain goods are illegal, there are those who are willing to make those goods available. There’s a profit to be made–but watch out for the Prohis, who will seize your cargo if they find something questionable!

At a glance: Prohis is a game by Marc Brunnenkant for 3 to 6 players, ages 10 and up, and takes about 20 minutes to play. It retails for $15.99. The game does involve bluffing (and figuring out when others are bluffing), so I’ll include the standard disclaimer that this is a game that teaches your kids to fool you–play at your own risk. The illegal goods aren’t specified in the game, so although the game is about smuggling, it does not actually picture anything unsafe for kids.

Prohis is strictly a card game with no other components. It comes in a small two-piece box that does have a little room to spare but not too much.

The cards are all right but they tend to clump together a little when shuffling–either because of the stiffness or the glossy finish, I’m not sure. There are just five card types, and each has a dollar value printed at the bottom. (The Prohis have two values, one for your score pile and one for your hand.) The card backs show a cargo truck carrying a covered load.

The goal of the game is to become the richest by transporting goods without getting caught and by confiscating goods from other players.

To set up, deal each player a Captain and a Major card, putting the other Captains and Majors back in the box. For a 3- or 4-player game, you’ll also remove some additional cards from the game. Shuffle the rest of the cards (legal goods, illegal goods, and lieutenants) and deal each player 4 cards. Finally, turn 4 cards face-up on the table next to the draw pile.

On each turn, you choose one of the following: draw cards, form a convoy, or pass.

To draw cards, you may draw 1 or 2 cards from the face-up cards or the deck, although only 1 card may come from the deck. You may not draw cards if you have 8 cards in your hand.

To create a convoy, you place 2, 3, or 4 cards from your hand face-down on the table. Other players now have a chance to inspect your convoy if they suspect it has illegal goods. Any player who wishes to inspect must play a Prohi card. If nobody challenges your convoy, you take all the cards and place them in your scoring pile face-down without revealing them. If Prohi cards are played, the highest rank gets to inspect, and in case of a tie for rank, the first player to play the Prohi card gets to inspect. All other players take their Prohi cards back into their hands.

If the inspection goes through, the inspector turns over 1, 2, or 3 cards (according to the rank of the Prohi) one at a time. If only legal goods are found, the convoy is successful and placed into your scoring pile, and you take the Prohi card into your own hand.

If any illegal goods are turned over, the inspector takes the whole convoy and places it into her scoring pile, and puts her Prohi card back into her hand.

The game end is triggered when the draw pile runs out of cards and there are fewer than 4 face-up cards on the table. Each player (including the player who triggered the end) gets one more turn, and then the game ends. The game also ends if all players pass.

Add up all the cards in your scoring pile:

Also, you score for Prohi cards left in your hand:

Prohis is another entry in Blue Orange Games’ Europe Collection, expanding their catalog beyond games that are primarily for younger kids. It’s a nice title, still good for casual gamers but for an older age range.

My first impression upon playing Prohis is that it is a lot like another bluffing/smuggling game I’ve reviewed, Sheriff of Nottingham. Both games involve a mix of legal and illegal goods (with illegal goods having a higher value), bluffing the inspector, and bribes. There are several differences, though: in Prohis, there’s one smuggler at a time, with everyone else having a chance to inspect. Also, there are only two types of goods–illegal and legal–rather than a range of goods with different values.

Overall, Prohis is a lot simpler than Sheriff of Nottingham, both in the gameplay and the scoring at the end of the game. It has a similar feel, in that you have to decide what cards to put int your convoy and whether to offer a bribe or not. This time, you have to decide whether to inspect the current player’s convoy–and you have to be quick about it because you’re also competing with other inspectors. That’s a new wrinkle–as is the fact that if you’re wrong, you’ve just given the other player one of your Prohis and they may use that against you (or score points with it).

The fact that your Prohi’s rank determines the number of cards you get to inspect is also different. Even after you decide to inspect a convoy, illegal goods may still get through, depending on how many cards you flip and which ones you pick.

The choice whether to offer a bribe or not is also part of the bluffing–sometimes you offer a bribe because you want them to refuse it and inspect anyway. Sometimes you offer no bribe, hoping that the inspector will take the chance to score the Prohi card and leave you alone. I also like the option of putting a Prohi card into your convoy–it does mean that you won’t get to use it for inspecting other players, but it’s a chance to stop an inspection immediately, which could be great for getting some illegal goods through.

When my daughters played this, my eldest (age 11) still did significantly better than my middle daughter (age 9). My eldest not only managed to smuggle some goods without getting caught, but she also caught a lot of other players and confiscated goods. My middle daughter, on the other hand, got caught every time she smuggled illegal goods, and didn’t manage to catch anyone else in the act.

If you have Sheriff of Nottingham already, you might not need a copy of Prohis too. However, if you want an easy intro to bluffing/smuggling games, it’s an inexpensive way to give it a shot and see if you like it–and there’s certainly room for more than one game in this genre. It’s a short, easy-to-learn game that’s more portable and accommodates one more player than Sheriff, but the strategy isn’t quite as deep. Prohis works for both kids and adults–as long as you’re comfortable lying to each other in the context of the game.

Buy a copy of Prohis from Amazon or check your local game store.

You Know Who Else Likes the ‘Regular Show’ Movie? My Mom! 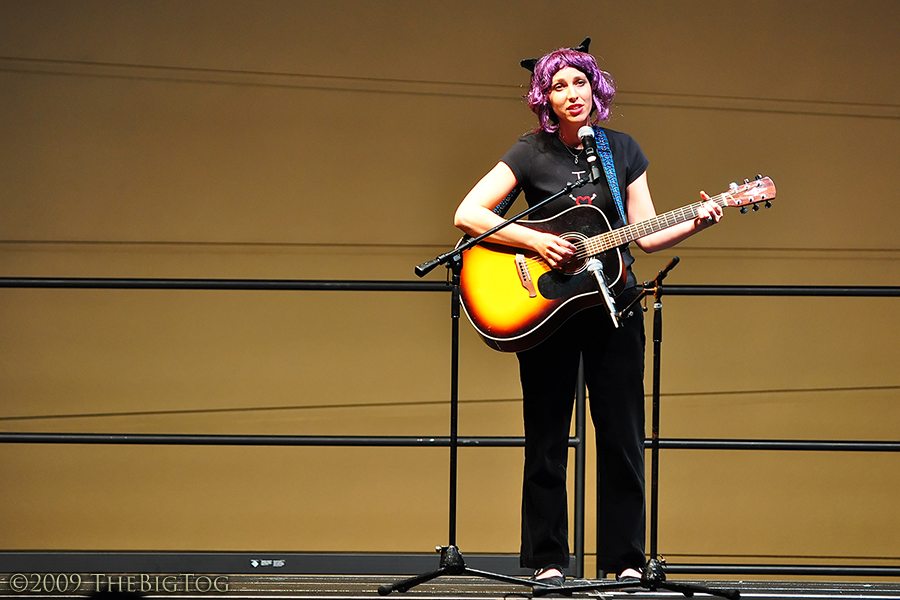