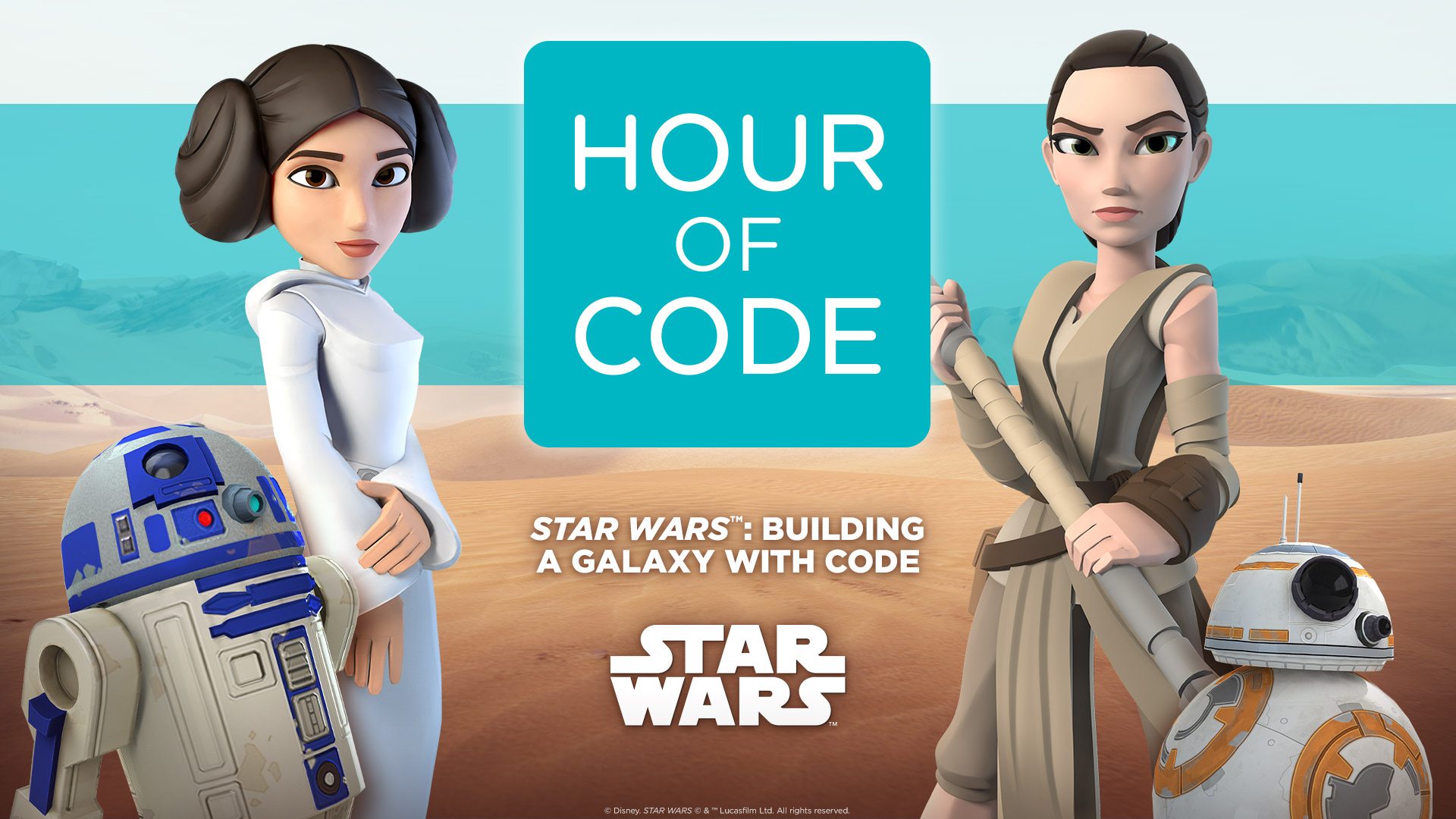 Remember in my PAX Review how I mentioned that Disney Infinity was going to be even bigger–especially with anything Star Wars related? Well, this is it.

Disney is teaming up with Code.org for this year’s Hour of Code and it is going to be big: Coding. Gaming. And, best of all, sharing!!

Code.org started “Hour of Code” in 2013 with the aim to expand access to computer science, especially in increasing the participation of women and students of color. The organization believes every student in every school around the world “should have the opportunity to learn computer science.”

As a public non-profit, they started small in 2018 with 70 public school districts in the U.S. Two years later, they’re in partnership with Star Wars.

Code.org will offer a Star Wars-themed computer science tutorial and, in absolute respect to Code.org’s key vision, the tutorial features Princess Leia and Rey as the main characters. Yeah, they’re “helped” along by the droids, but you and I both know who is running this ship.

Each student can team up with Rey to guide BB-8 through a space mission, then work with Princess Leia to build their own game. The sweet bonus: Students can play their completed games on smartphones and share them with friends and family!

There are two versions of the tutorial available: the first one introduces users to JavaScript and allows them to create a game in their Internet browser. A second, tablet-friendly version is coming out in a couple of weeks and it’s a drag-and-drop aimed at beginners and younger students.

It’s not the first time Disney has teamed up with Code.org. Last year’s event had a coding tutorial with Anna and Elsa from Frozen. Personally, I think this year is way better.

My spawnlings, Sinister (9) and Nefarious (6), are both suitably excited about this whole venture. They care not about the gender, which in itself is awesome, and I doubt there are any boys out there who will be “turned off” by the female characters (it’s Star Wars!!). On the other hand, there are a bunch of girls out there who would never have thought this was available for them. With Leia and Rey at the helm, there is no longer a doubt. In the recently immortalized words:

As I said earlier–this is a global movement. Hour of Code is happening all around the world from December 7 to December 13, 2015.

I want to see a whole bunch of links shared in the comments below–I want to see ALL THE GAMES created by the little spawnlings. Go! Code! Create!

Silly Dragon, Robots Are for Toddlers