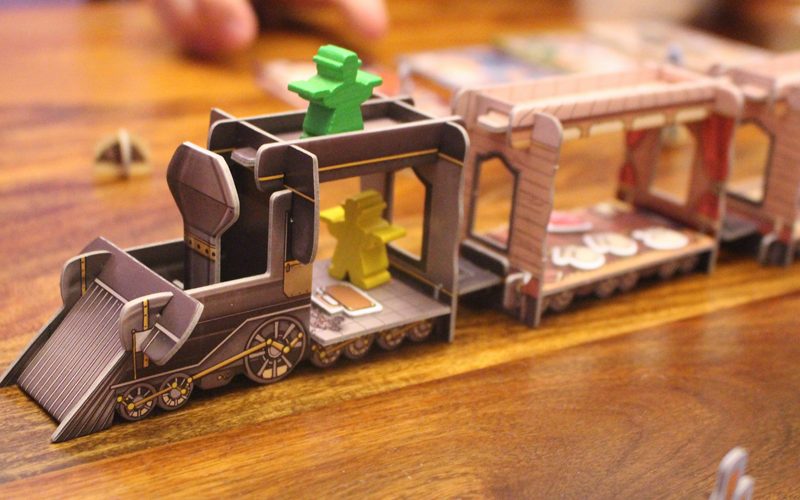 In Colt Express, you take on the role of a bandit holding up a train in the American Wild West. Players use their cards to move around the train, gather loot, attack rival players, and influence the Marshall–at the end of the game the player with the most loot is the winner.

How do you play?
Each player has an identical deck of action cards which include movement, picking up loot, punching/shooting rivals, and more. The game is played over a number of rounds, each of which are divided into two parts. All the players shuffle their deck and take six cards into their hand for that round.

Part one of a round is named Schemin’. Players take it in turns to place their cards into a combined deck in the order they wish to play them. For example, a player could choose to move horizontally, then move downwards from the train roof into a car, pick up some loot, and finally shoot a rival.

In part two–Stealin’–the player whose turn it is takes the combined deck and reveals each card in it one by one, acting out the schemes laid down earlier in the round. Even the best laid plans often go kaput thanks to the actions of the other players. Loot you intended to pick up may have already been taken, or someone you intended to punch may have moved out of reach. This means that there is a fairly level playing field here. Even regular players can have their schemes scuppered by a newbie who acts unexpectedly. There’s also a fantastic sense of chaotic fun as each card is read out. Once all the cards have been read out, any end-of-round actions dictated by the round card is performed and a new round begins.

What else is there to know?
Each character in the game has a unique special skill. Doc can have seven cards in his hand instead of six, Tuco can shoot up and down through the roof and not just horizontally, and Belle cannot be attacked if there’s another character available. Supposedly this is because she is a girl and hitting/shooting her would be ungentlemanly, however the same rule does not apply to the other female character who is Native American, prompting several comments about how it is apparently acceptable to shoot her but not a white female…

The rounds are dictated by a special deck of cards that determine events. Rounds may have different numbers of cards played, suddenly change the order in which cards are played, allow players to play cards face down to hide their actions, or have special events at the end such as sending all players to the rear of the train. This adds an aspect of randomness that enhances the replay value; no two games are ever quite the same.

If you are shot by another player or the Marshall, you add a bullet card to your deck. This serves to weaken your deck (in one game I was shot so many times that on one occasion I drew a hand of four bullets and only two useful cards). If you manage to discharge all six bullets from your gun, you are awarded a $1000 bonus at the end of the game, easily enough to influence the outcome. The shooting aspect is one of the most fun, especially when multiple targets are present and players have to choose who they are going to shoot. The potential for friendships and marriages to be destroyed is high, which is always an exciting aspect in any game! It’s always fun to gang up on a particular player too–perhaps someone who has been winning far too much recently and needs knocking down a peg!

How long does it take to play?
Colt Express is a very fast game to play once you are familiar with how it works. The box estimate is 40 minutes, but even in a six player game rounds only take a matter of minutes to play through, meaning a game can be over in just 20-30 minutes. This means it actually works well as a short fun game to whip through between longer more strategic games. The first time you play, allow plenty of time for set up as you will need to build the three-dimensional train and carriages. Thankfully the box is designed to store these fully built, so you won’t need to dismantle them at the end of every game.

How many players do you need?
The box suggests that two to six players can play, however we found the two-player game rather dull because there just was not enough going on. Three- and four-player games work much better, but with Colt Express, more really is merrier. A six-player game creates a sense of absolute mayhem of the kind you’d expect during a wild west train heist with guns firing and fists flying everywhere! The number of players also dictates the length of the train itself, so players in games with few opponents cannot easily hide out.

Can I play with my kids?
The recommended age for Colt Express is 10 and up making it a good family game to begin with, however I managed to play with my six year old by stripping out some of the more complex elements. By removing the Marshall, special character abilities, and the randomized aspects of the rounds, we were able to play a fun game that both of us stood a chance at winning. The 3D train model is really appealing to children (REALLY appealing–look out for small fingers, as it’s not as sturdy as you might hope) which makes it extra fun for them. My son loved the game, particularly getting to shoot at his parents and steal from us, and when he’s a little older, I imagine it will be a lot of fun to get out when his friends are over. 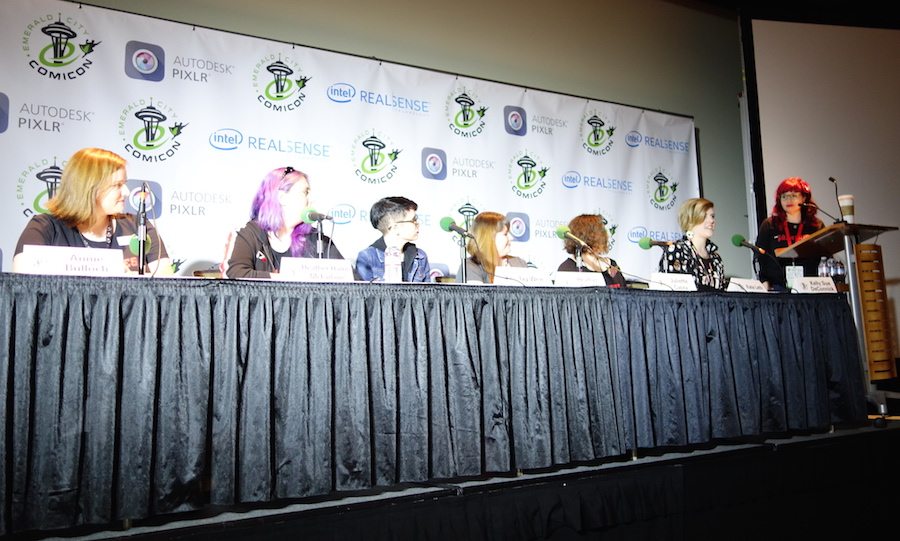