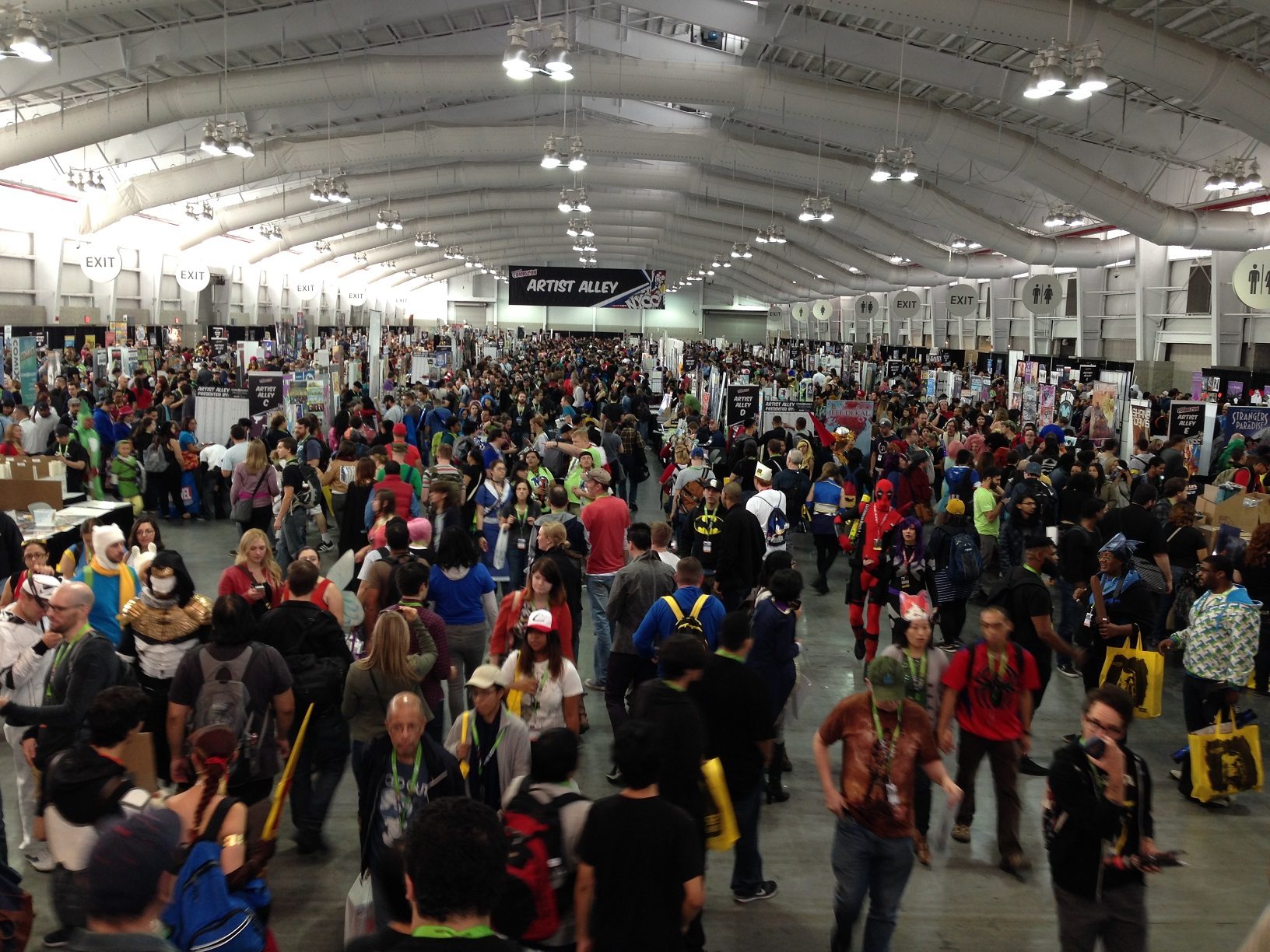 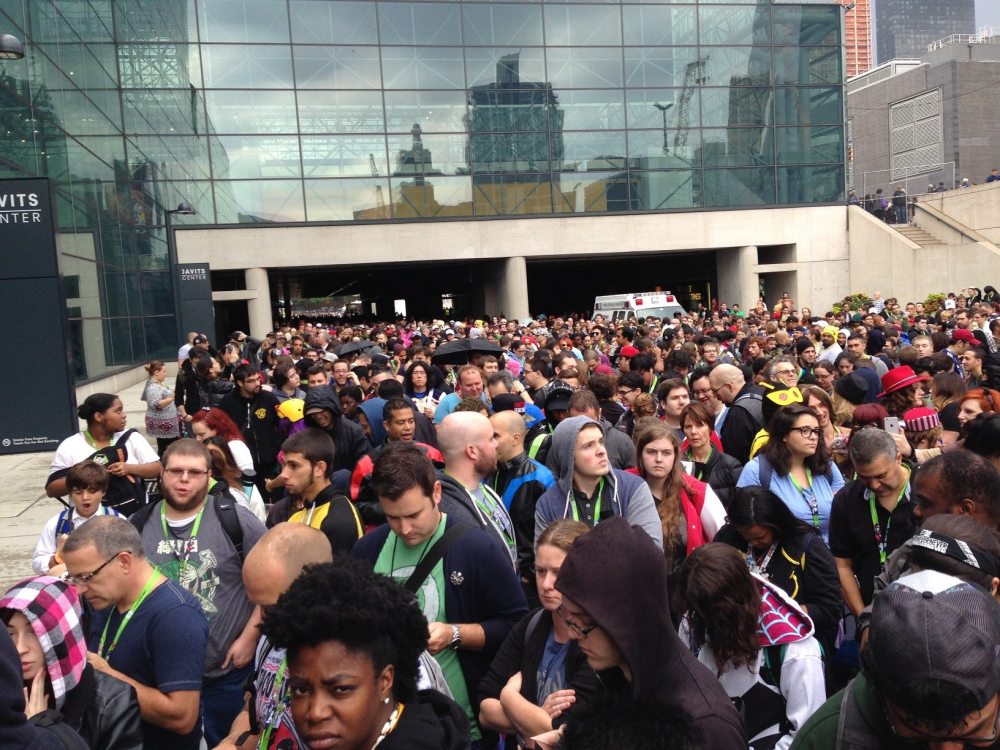 With New York Comic-Con now in our rear-view mirror, I thought it might be a good time to reflect on the state of these nerd gatherings and consider if they’re actually worth it.

Let me just get this out right away: I was at NYCC this year, and, by and large, it was a miserable experience. It was much too big, and there were far too many people. This wasn’t my first convention (by any stretch of the imagination), and it wasn’t even my first NYCC. Maybe I’m just getting old and crotchety, but when it takes 30-40 minutes to walk from one end of the show to the other, I think we may have reached critical mass.

Make no mistake: NYCC is huge. By some estimates, it’s surpassed San Diego as the biggest show of the year. This year’s official attendance number was 167,000, which puts it ahead of San Diego, but there’s the pesky issue of how the two shows actually calculate attendance. And I won’t lie; there was a lot of great programming and oodles of fantastic guests to see. 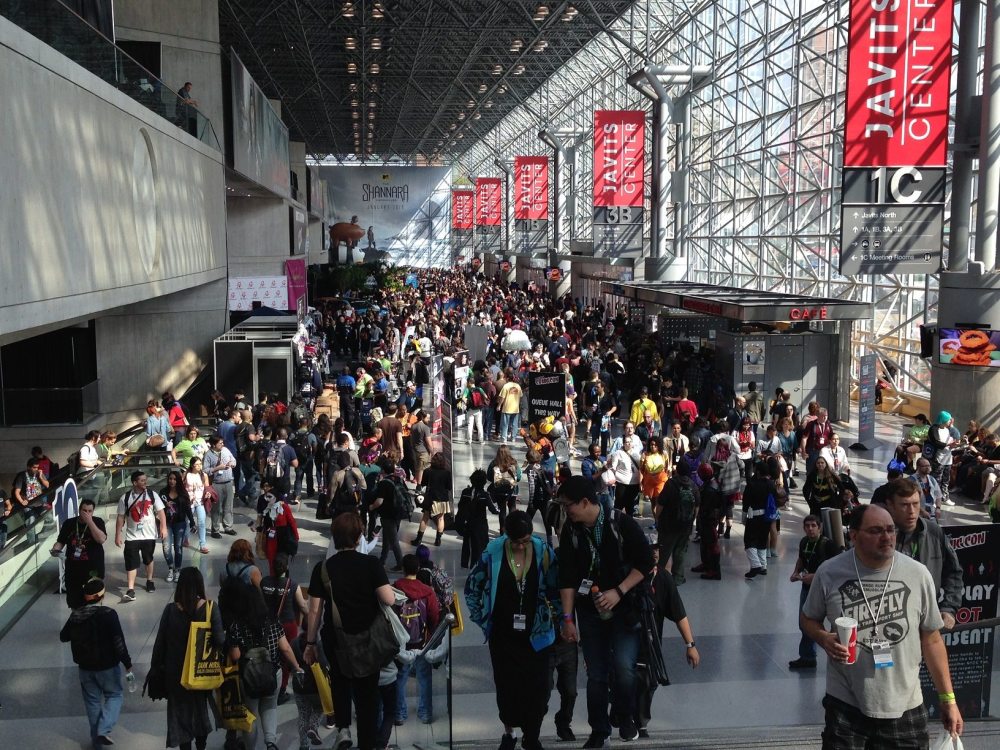 The problem, though, is that it’s next to impossible to get in to some (most?) of those panels or see many of those guests. For example? Let’s assume that you want to see one of the popular, main stage panels (e.g., the Firefly reunion or The X-Files panel). To get into the main hall, you’re required to have a wristband on top of your regular badge. Want a wristband? I hope you’re an early bird. The doors officially open at 10am, but if you want a wristband for one of those popular panels, you really need to be in line several hours before that. (Some people just camped out overnight.)

That’s an extreme case, of course, but nearly all of the panels had long lines, and I was shut out of several of the smaller ones. None of this is new or exclusive to NYCC (San Diego’s notorious Hall H is a prime example), but because there are just so many people in the building, every line is full, every booth is crowded, and every square inch of “free space” becomes an impromptu stage for cosplayers’ photo shoots.

(Seriously, I think it’s time to institute a “maximum dimensions” rule for cosplay…or at least establish some “no-fly” zones for these costumes. I saw enormous costumes clogging up narrow exhibit hall aisles at NYCC all weekend long. Yes, they were impressive and I normally love cosplayers, but when you have to fight against 167,000 people to get from Point A to Point B, that life-size, realistic Doc Ock becomes nothing more than a maddening frustration.) 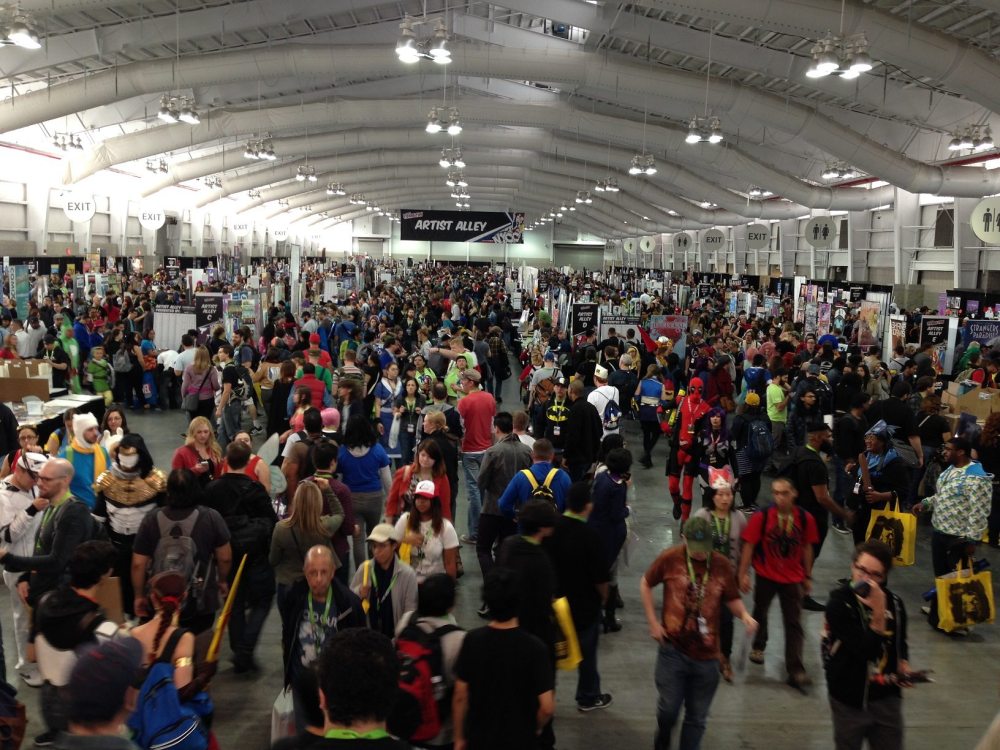 It also seems as if these shows are just getting longer and longer. San Diego officially runs Wednesday through Sunday. New York is “only” four days, but it’s now preceded by New York Super Week, which includes various nerd-friendly events around the city. The first week-long convention can’t be too far off.

Think about it, though. Do we really need the standard to be set at four days? That’s exhausting on everyone – fans and pros alike. By Sunday, the entire place might as well be cosplaying The Walking Dead. 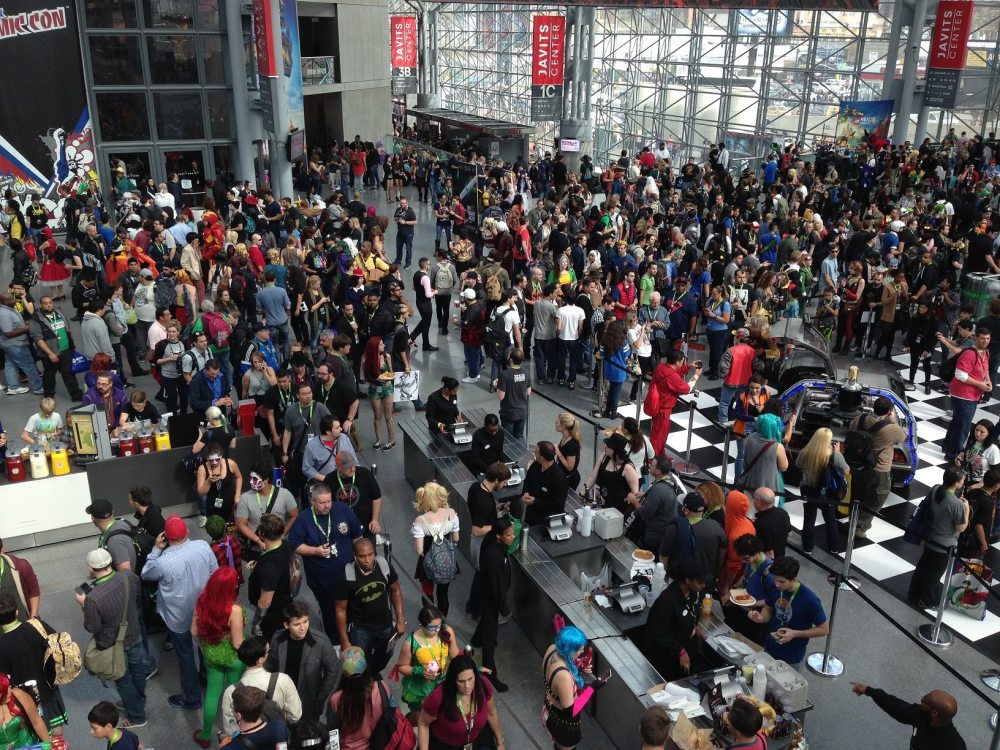 I grew up going to small, hyper-local comic book conventions that occupied a single meeting room in a Holiday Inn. There were no celebrities, no media guests, no overpriced photo ops. What was there? A lot of comic books and a lot of happy fans.

I’m not suggesting that we need to return to these super-small shows, but I think far too many fans discount the smaller conventions held in their hometowns or nearest major cities because of the assumption that they’re somehow inferior to the megacons in San Diego and New York.

I saw a lot of sadness and disappointment on Twitter leading up to and during NYCC from fans who couldn’t get tickets or couldn’t travel to New York. Believe me, you were probably better off at home, following along online or livestreaming the panels.

But chances are, there’s probably a great convention within an hour or so from most of those people who were so heartbroken at missing NYCC. Sure, maybe it doesn’t have a Firefly reunion with Nathan Fillion, and maybe Bruce Campbell won’t be there to promote his new Evil Dead television show. But if geek “fandom” is going to survive, it needs to be spread out to as many people and as wide an audience as possible. Ideally, this means having ten cons in ten different cities rather than having ten times as many people in one location. 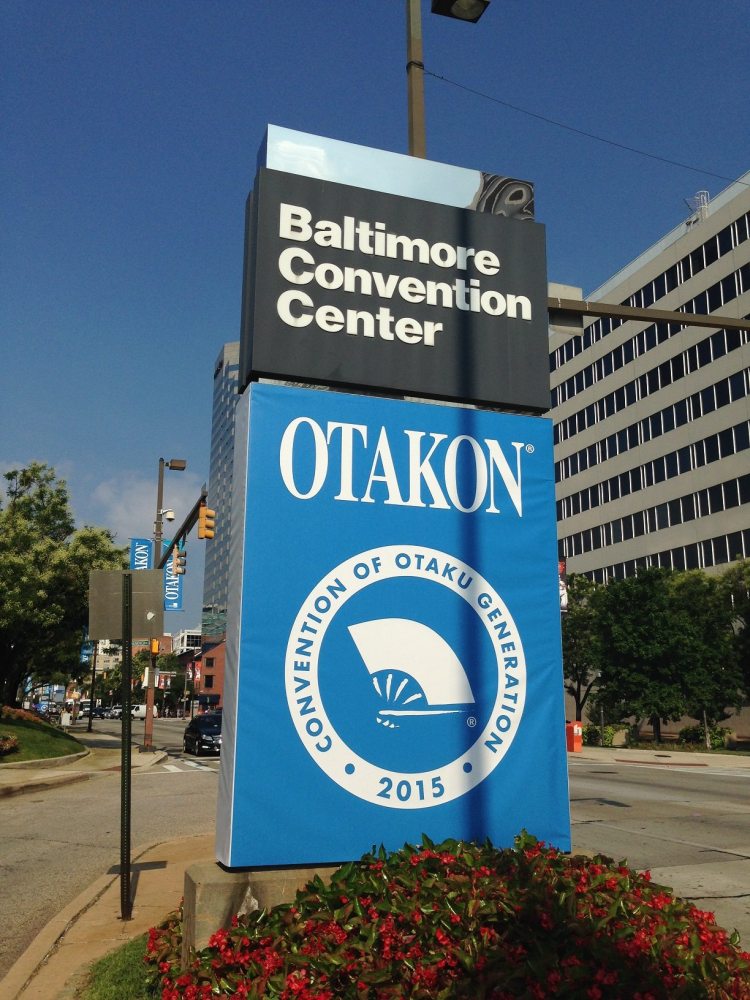 What am I talking about? Let’s take a closer look at Otakon, an anime convention held in Baltimore, Maryland, for the past 20 years. Never heard of it? Baltimore has. And in a city that has had more than its share of difficulties (this year especially), a gathering of 30,000 nerds is not something to sneeze at. For this year’s show, Otakon secured room blocks in 24 different hotels and sold an average of 10,000 total room nights.

These numbers may not sound like a lot when compared to something like NYCC, but the economic impact that show has on New York City is negligible. By contrast, the estimated economic impact Otakon 2015 had on the city of Baltimore was $12 million. In 2014, that figure was enough for it to rank third among all conventions and trade shows held in the city. It also boasted the highest attendance of any convention or industry meeting for the year.

And in a city that’s struggling to attract tourist dollars, that’s huge. Want to know what else ranked among the top 25 most lucrative events for Baltimore? Bronycon. Surprised? You shouldn’t be. The nerd dollar is powerful, and I guarantee that you’ll find a similar story to be the case for most major cities.

A quick anecdote: I have a friend who makes and sells a very particular style of Japanese clothing that clearly targets this demographic. Otakon is the one show every year that she simply can’t miss as an exhibitor. On a good year, she can make enough in one weekend to sustain her business for an entire year. NYCC? Not so much. She exhibited in 2014 and lost money. I heard similar sentiments among exhibiting professionals at this year’s show. NYCC is so expensive to table and there’s so much competition for buyers’ attention that it’s usually a losing proposition. 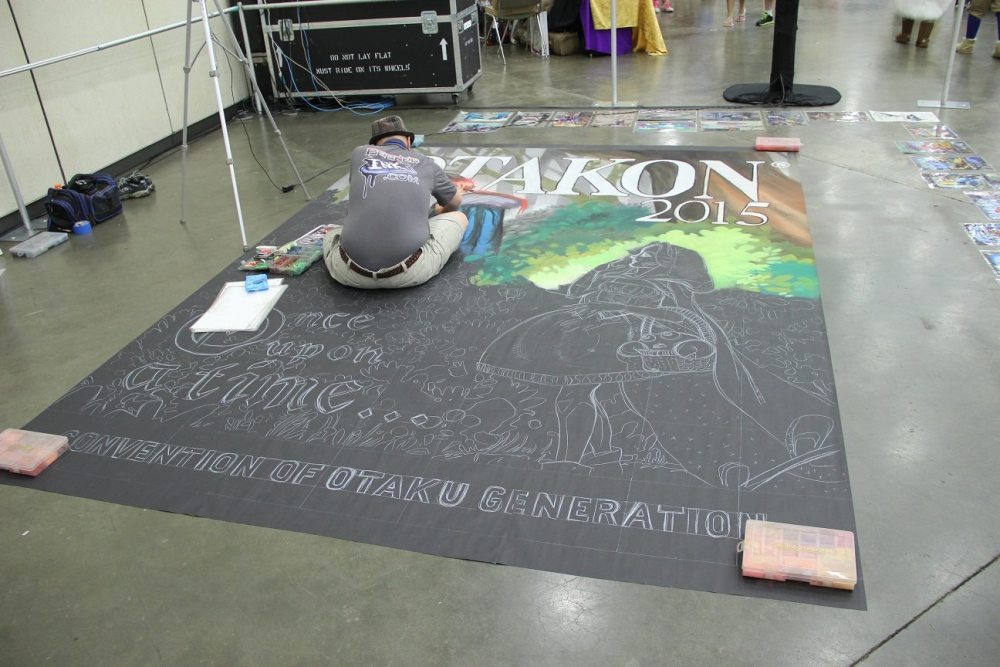 You know how I felt at NYCC? Like a fish caught in a current. Like a sheep trapped in an enormous flock. Like an afterthought. By Sunday, I was exhausted and had nothing positive to say about my experience.

You know how I felt at Otakon? Like a welcomed member of a friendly community. Like I was engaging with like-minded people on the same level. By Sunday, I was tired, but I was still thrilled to be there and excited about what I was seeing and who I was meeting.

New York and San Diego don’t have a monopoly on the convention scene. Nor should they. In a time when every bit of breaking news is online immediately and every “exclusive” trailer or video clip is on YouTube within hours, they’ve outgrown their utility and are, frankly, too big to enjoy.

Support your local show, support local creators and retailers, and support your city. Go out to a restaurant for dinner, spend some money outside of the convention center, and wield ye almighty nerd dollar.

Smaller, local shows are where it’s at, people. 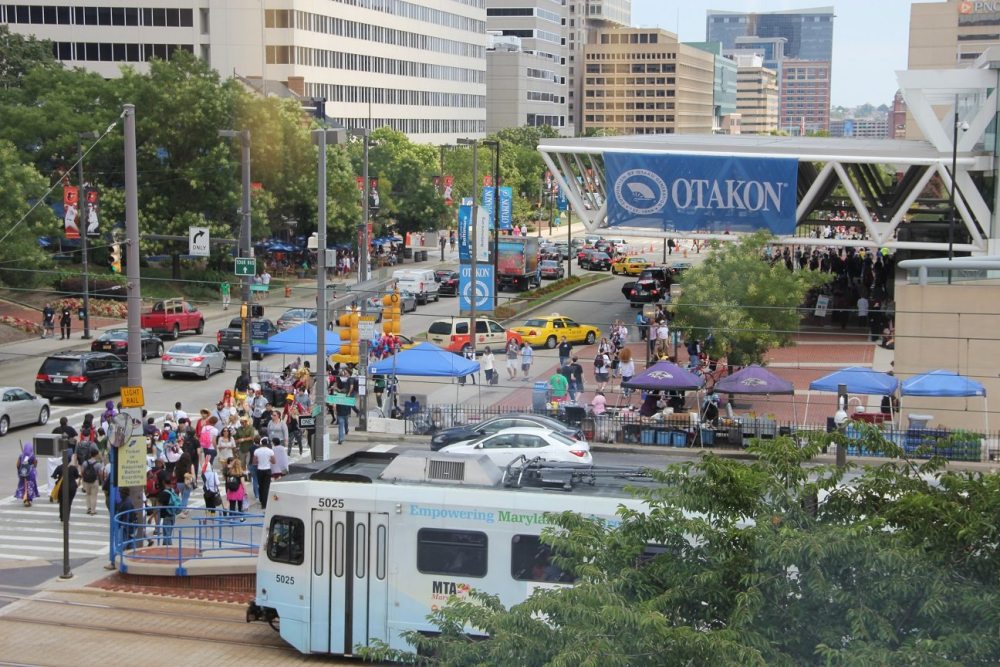 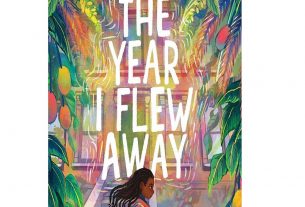 5 thoughts on “In Defense of the Small Con”