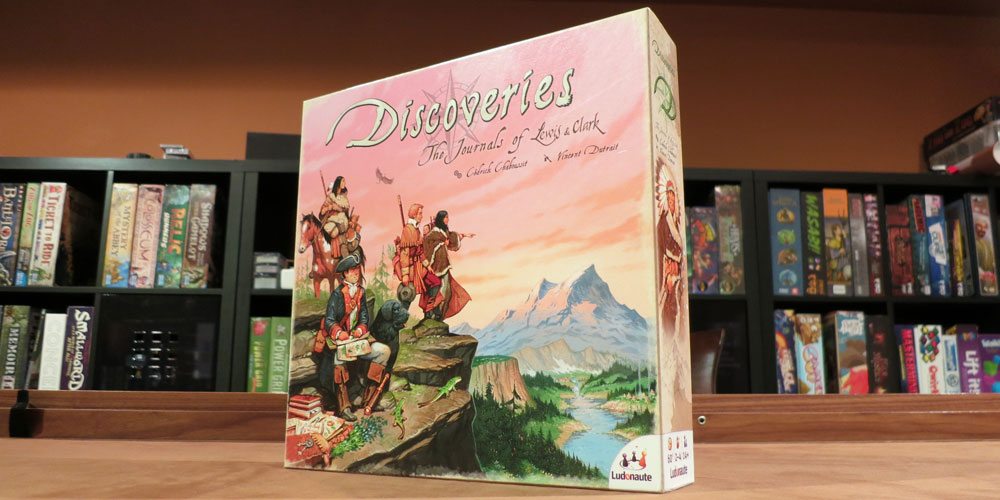 When the game Lewis & Clark: The Expedition hit shelves in 2013, it was one I recommended a lot. Not only was the worker placement game a challenging and fun time, but designer Cédrick Chaboussit really went the extra mile by featuring actual historical figures on the cards of the game. He even provided dozens of bios on the American Indians and Explorers that made up the game. So when I saw that Asmodee was releasing Discoveries: The Journals of Lewis & Clark, I was pretty excited. Chaboussit was in charge again and Discoveries also brought back Vincent Dutrait, whose stunning artwork had brought Lewis & Clark: The Expedition to life.

At first glance, Discoveries is a pretty unusual game. After all, it’s a game about … journaling. But once you get past your initial impressions of the idea, the theme is deep and incredibly strong. It’s based on President Jefferson’s instructions to Meriwether Lewis and William Clark and most of the President’s requests regarded chronicling the continent’s people, fauna, and flora as the party headed west. True to those orders, Discoveries tasks players with exploring the land and “recording” their findings along the way.

Discoveries is a game for 2 to 4 players, aged 14 and older and plays in about an hour. 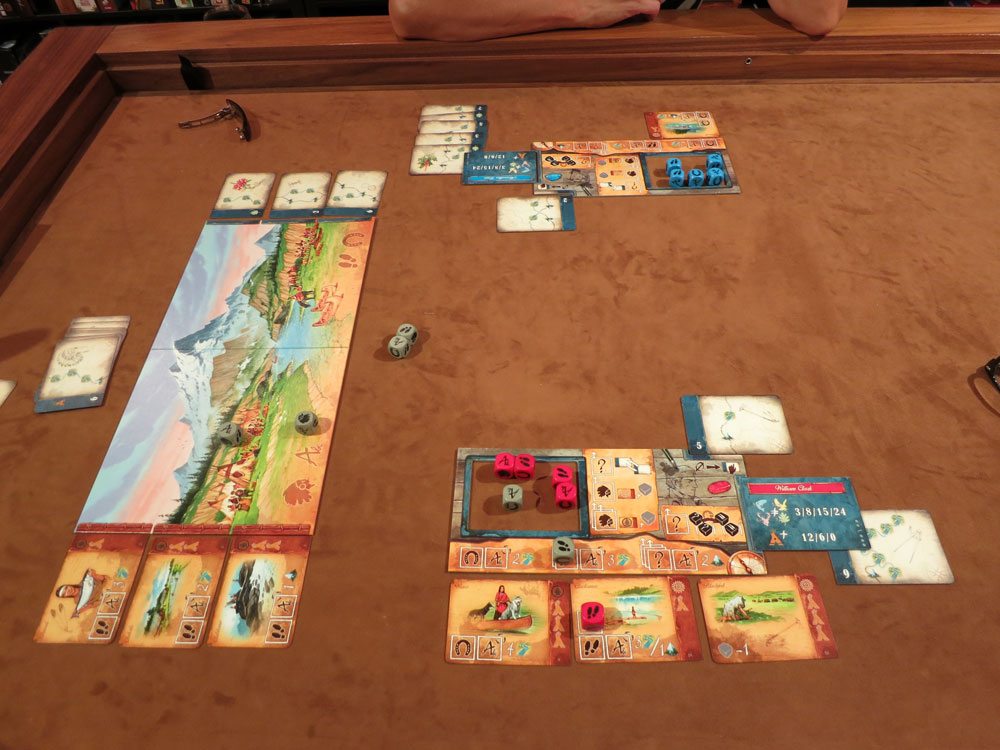 Great detail is given to every part of this game, from box insert to rulebook, and everything is perfectly illustrated. I can’t say enough about Dutrait’s work, it absolutely excels in setting the tone for the theme and the game.

In the box there is:

Not a lot there, but all of the cards are very nice, on a decent linen stock and the game boards (both communal and individual), along with the journal covers, are done very well on heavy stock. The dice, while of good quality, feel very light in the hand, which is off-putting at first. 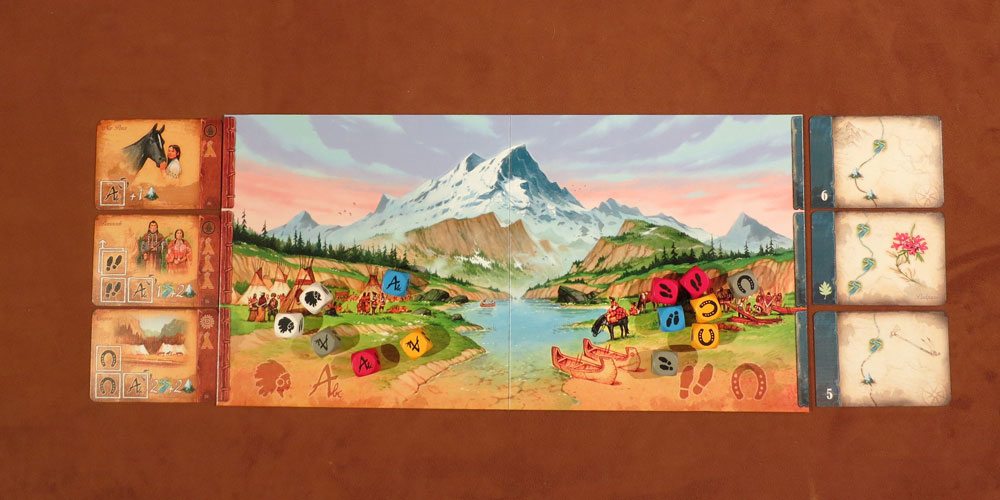 The communal game board is placed within easy reach of all players. On the left, three Tribe cards are placed. On the right, three Discoveries cards. The cards play an important role in the game, so they deserve further explanation:

Tribe cards have symbols showing if the American Indians are either friendly or wary. There are also a number of tepees on the cards, and a beneficial action and an effect is shown on the card. These are like the actions on the player board, but oftentimes, a major improvement.

On the other side, the Discovery side, there is a path from the bottom to the top of the card. Sometimes this path has forks and a player can follow whatever route he chooses to cross the card. Paths are punctuated by mountains and rivers and these make up the barriers to overcome to complete the card. Additionally, Discoveries cards provide a reward of American Indian tepees, victory points, and/or discovered fauna/flora species. The number of cards in a game is dependent on the number of players playing.

Players choose a character (Lewis, Clark, John Ordway, or Patrick Gass) and take the corresponding player mat, journal cover, and dice. There is no benefit to having any player, there are no special benefits to any character. Journal covers have two sides, one for a four player game, another for 2/3 player games. 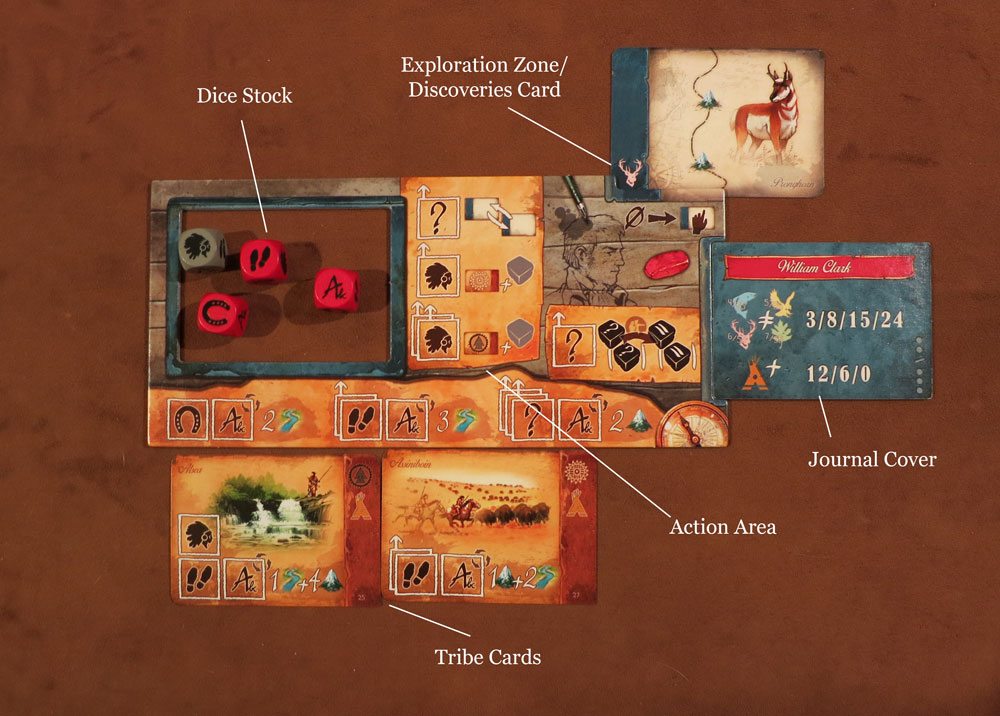 Each player chooses an available Discovery as his first expedition goal and places it next to the player board. Players then role their dice and place them in the open Dice Stock part of the player board and play is ready to begin.

On your turn, you may do one of two things: Play Dice or Rest and regain dice. Simple, right? Well, only on the face of it. Discoveries is elegantly simple to begin with, but there is a lot under the surface.

You can only play dice from your dice stock and, even then, you can only play dice with the same face showing on a turn. Dice have four faces: Walk (x2), Ride, Negotiate with American Indians, and Journal Writing (x2). Depending on what face is showing, you can accomplish a variety of goals, from taking a tribe card to changing dice faces, to changing out your Discovery card. All of these actions force you to forfeit your played dice to the communal Camp board. Forfeited Negotiation and Journaling dice go on one side of the board, Walk and Ride on the other.

What’s more, on the player board, there are exploration actions, which require multiple actions to accomplish. For instance, exploring two rivers requires a Ride die and a Journal die. Since only a single die face can be played at a time, the Ride die must be placed first and the Journal die on a subsequent turn. Many Tribe cards provide better exploration options and have the same multiple turn requirements where different dice are required. Some of these actions require you to forfeit some of your played dice to the Camp Board. Others return dice to the player’s Dice Stock (after re-rolling). While some dice have to be forfeited, some actions allow the player to take one of the neutral grey dice in return. These are rolled and placed in a player’s Dice Stock.

Some Discoveries cards will ask a player to explore a deep swath of wilderness, for example, encompassing two mountains and four rivers. This will require a player to pursue multiple explore actions, which compound. Actions immediately execute when the Journal die (dice) are placed, so a good strategy is to build up the necessary dice to accomplish a Discoveries card and then execute 2 (or 3) actions at once with an equal number of Journal dice. If a player has extra movement, he can draw a second Discovery card and complete it, as well (if possible). Movement cannot be banked and is immediately lost if not used.

Once an action turn is complete, Tribe cards are replaced in the Meeting area of the Camp Board and Discovery cards are replenished in the Reconnaissance area.

If a player is unable to complete an Action (or chooses not to), he has one other option available: Rest. During Rest, a player may take all of the Negotiate and Journaling dice from the Camp Board or the Walk and Ride dice. These are rolled and placed into the player’s Dice Stock. The other option is more cutthroat and really adds a different dimension to the game. A player may alternately retrieve all (or as many as he chooses) of his own dice from the entire game area. So, if you had to forfeit some dice to accomplish an action and another player took your dice during a Rest and is now using your colored dice in anticipation of completing an action on his player board, tough luck. Take them all and re-roll them and put them in your Dice Stock. Your opponent is up a creek in a dugout canoe without any semblance of a paddle. Keep an eye on your opponents – retrieving your dice can be an incredibly helpful move for you … and very damaging to your opponent. All’s fair – in love, war, and journaling.

Gameplay continues until a player can’t refill his Exploration zone with a Discoveries card. All players get a final turn and scoring begins. Discoveries cards’ victory points are simply added. Species cards are counted in sets – get a plant, a mammal, a bird, and a fish and you can rack up 24 big points. Just have a single species? You can still score, just not as much. Finally, knowledge of American Indians is determined by the total number of tepees on all cards (both Tribe and Discovery). The player with the most gets 12 points. Second and third points are dependent on the number of players in the game. Add the points up to find out who wins.

I’m not sure what to talk about first – the art, the theme, the history, the gameplay – they are all fantastic and it’s difficult to say which among them stands out among the others and they are integral to the whole. But I have to start somewhere, so let’s consider the look of the game. I know I’m starting to sound like a broken record, but Vincent Dutrait’s art is just jaw-droppingly GORGEOUS! The wood grain of the player areas, the patina of aged buckskin on the cards, the sketches of Indian wardrobe, discovered species, and more – all hearken back to the journals of the inveterate explorers, although done with more flair and ability than Mr. Clark or Lewis.

I feel like there’s just a little extra this time around, more attention to detail, more elements that make Discoveries just a little better than Lewis & Clark, look-wise. Plus, the rulebook is made to look as though it was printed on parchment, a really nice touch that is just one of many things that really bolsters the game’s theme. When I was done with my first game, I felt like I had been on an expedition. I had gathered the resources to travel through mountains and rivers. Along the way, I had met with American Indians who helped me in my exploration. On occasion, I had discovered a new species and all of these experiences factored into whether or not I did better than my opponents.

Another thing that drove the theme was Cédrick Chaboussit’s altogether comfortable inclusion of history. While I think Lewis & Clark might be a better example of this, Discoveries is still steeped in lessons. From Jefferson’s actual instructions to subtle touches like the 30 resource dice representing the actual 30 enlisted men who made up the expedition’s Corps of Discovery, Chaboussit educates while entertaining. And Discoveries is certainly that — fun. Once you learn the game, after the first few minutes, it plays very, very quickly, with turns coming fast and often. The quick play makes the game fly by and before long, someone is drawing the final Discovery card and the game is coming to a close. Even then, the game feels perfectly timed, neither too long nor too short.

There are a lot of parallels to the earlier Lewis & Clark game. The art, the theme, the history, and the fun. One other similarity — Discoveries is still, at heart, a worker placement game. Although, this time, the dice are the workers. The challenge is in the rolling. Bad rolls can really hurt, as you have to spend an extra turn acquiring dice to roll or forfeiting dice to change faces. But it’s a challenge that affects all players.

The biggest hurdle we faced was in the biological exploration. You never play with all the cards, even with four players, you’re leaving some cards in the box. And then, because the cards are two-sided, it’s possible that some (or most) of the species-specific Discovery cards get flipped and used as Tribe cards. It’d be nice if species could be discovered through meeting with American Indians, also, but it’s a small quibble.

Discoveries plays incredibly well with 3 or 4 players, especially when it comes to scarcity and competition for dice resources. However, I think it’s better to learn with 2 players. The game goes faster and it plays a bit easier. But whether you play with 2, 3, or 4, you should make time to play Discoveries. Like Lewis & Clark, so much thought and work has gone into this game that it is a truly unique and enjoyable gaming experience … and the best time you will ever have journaling. 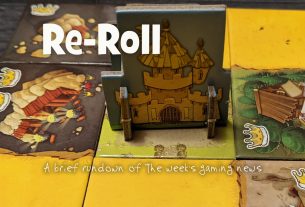 Back to Our Future: The 1980s and How They Affected and Were Affected By Everything Else