Here at GeekDad, we try to keep things on the PG or PG-13 side; but let’s be honest: your kids are going to be campaigning hard to see (the R-rated) Deadpool when it drops. For those of you wondering who Deadpool is, here’s a taste of what he has to offer (it’s OK, your older kids can probably watch this one over your shoulder):

Funny, violent, and just a little bit meta, right? The Deadpool trailer ticks off all the right (little yellow) boxes (though it’s a shame the meta-awareness of ‘Pool knowing he’s part of a fictional construct seems to only be used for marketing so far). The trailer revisits the original test footage that got leaked and made the Deadpool movie a reality, and adds a ton more. We get Blind Al, Negasonic Teenage Warhead, and Colossus (in his best look yet) all dropping in. We get backstory and pop-culture wisecracks. We get what’s probably going to be the best Marvel movie from 20th Century Fox since the original X-Men (and this looks to be better than that by a long shot…not that Longshot).

So there’s no problem, right? It’s a superhero movie! There’s some violence and sass; but that’s expected. Give your kids a $20, drop them off at the multiplex and call it a day!

Weeeellllll…(make sure the kids vacate the premises for this one)

And that’s the Wade Wilson we know and love. Deadpool is going to be a bloody, foul-mouthed, morally-questionable patch of road (and I just noticed that the green-band trailer has Wade’s crayon drawing as the freeze-frame, while red-band gets actual gunplay, nice touch). This isn’t just a wise-cracking superhero story; this is the story of a man who was given the prophetic “great power” and ended up completely unhinged. Bad things are going to happen on a pretty-much constant basis and blood and f-bombs are going to be measured in buckets. For fans of the Deadpool comics, it’s going to be the movie we always wanted.

I don’t blame your kids for hitting you like a party piñata trying to convince you to see it. But this is going to be one of those movies that require a pretty solid judgement call. Just be ready for them to learn some fun new phrases! 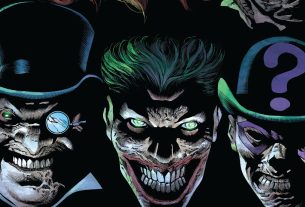