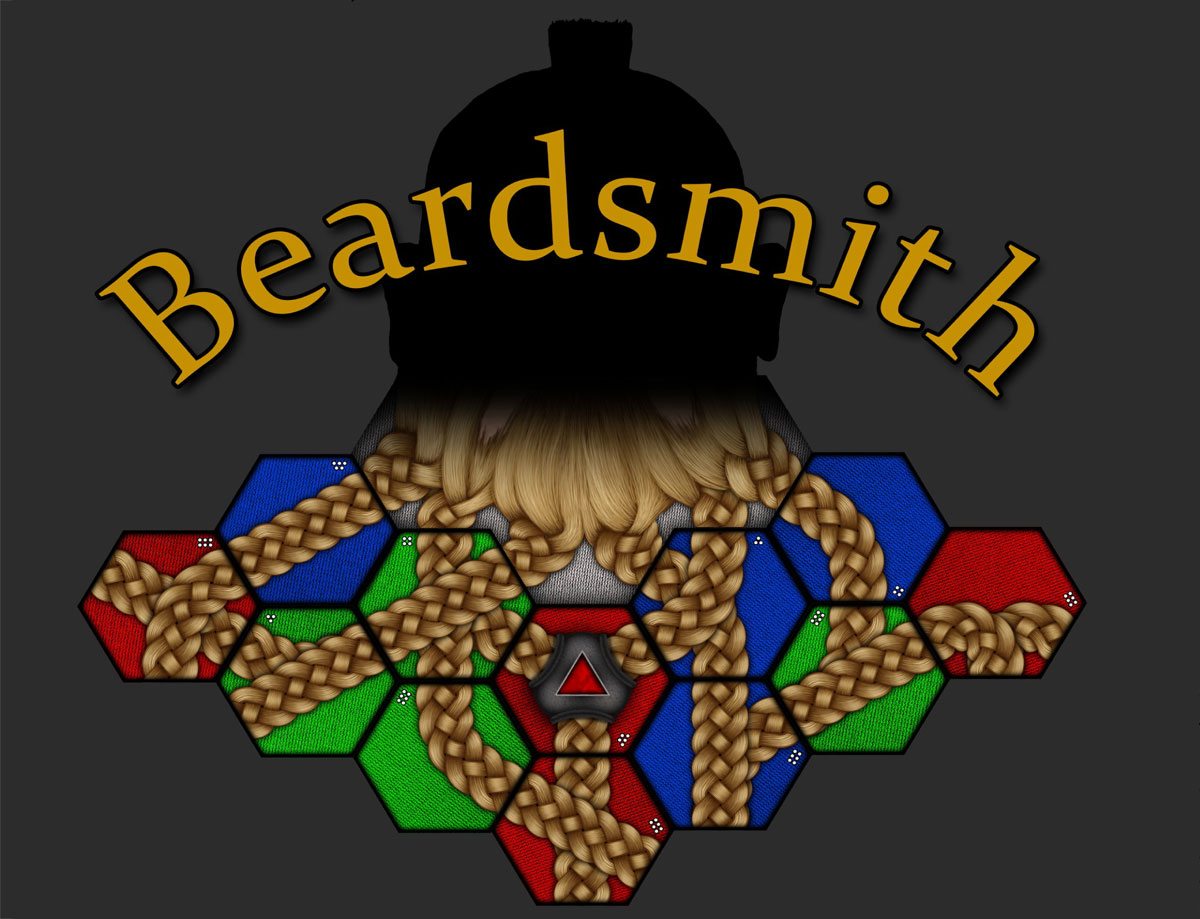 HaleFire games just launched their first game, Beardsmith, on Kickstarter. Beardsmith puts you and your friends in the role of dwarven beardsmith apprentices vying to take over as Master Beardsmith.

Beardsmith will come in two editions–two player and two-to-six player–but the components and rules are the same in both. The starting tile for the game is a dwarven customer who needs some beardsmithing (because the most elaborate of beards are not done at home alone) and each player has 20 tiles in their color that they can use to build the beard or slow down and mess up other players. 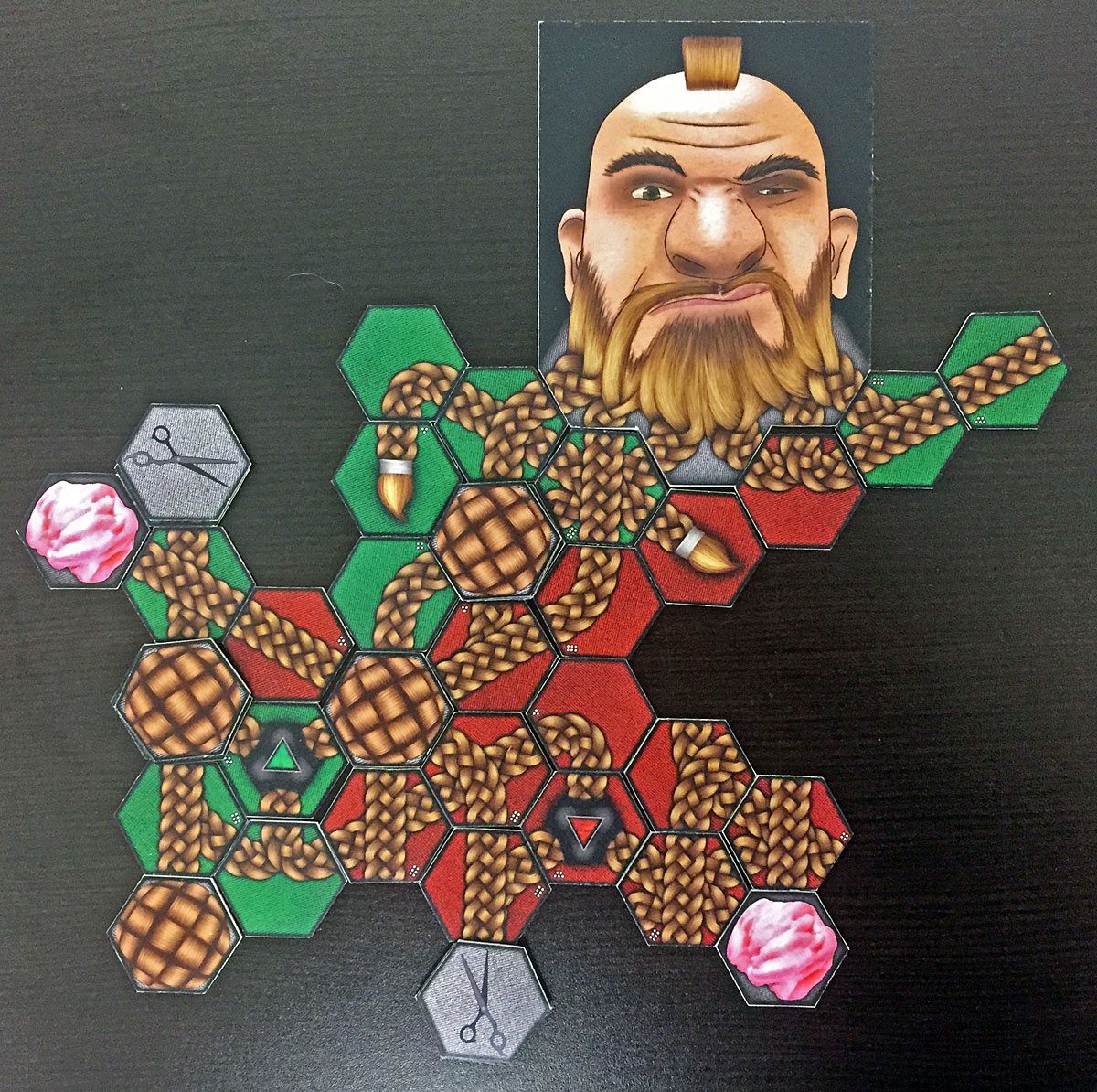 Game play is seemingly pretty simple at first. Each player has a hand, laid face-up on the table, of four tiles. Each player takes a turn placing a tile. Tiles must align with the hair already in play but can be played next to any other player’s color. Each player gets one point per tile played in their color.

But then it gets more complex. There are also three special kinds of tiles: wild tiles, chewing gum, and scissors. Wild tiles can be played anywhere regardless of neighboring pieces. Chewing gum can be played anywhere including on top of an existing tile. Gum causes a negative point for any color tile going into or out of the gum tile and essentially erases the tile it is placed on top of. The scissors cut off an existing tile allowing a new tile to be played in its placed.

The only other score modifier is loose ends. Any loose braids at the end of the game are another negative point. The special tiles and puzzle matching along with having an open hand make this game a good mixture of skill, chance, and press your luck. Beardsmith is fast, fun, and quick to pick up and learn. We played several rounds in a short amount of time and will definitely break it out with our friends at our next game night.

One of the things that makes Beardsmith especially interesting is that instead of printing the game on standard chipboard as you’d expect, HaleFire is going to CNC cut all of the components out of MDF themselves and then have them printed locally. This is going to give them a lot of control over all the manufacturing details and quality of the final game.

I’m really looking forward to seeing the finished game, especially because of the unique materials and process that are going in to the manufacture of the game. This will be a long-lasting, beautiful game to have on my shelf and table. While I wait for the final game, Benjamin and MaryAnn Hale of HaleFire Games were kind enough to let me ask them some questions about the game, being game makers, and raising gaming kids.

GeekDad: When and how did you first get in to gaming?

HaleFire Games: Benjamin grew up playing chess and video games while MaryAnn grew up playing traditional family board games and computer games. When we got married in 2003 we combined the best of both gaming styles–MaryAnn learned how to play Legend of Zelda on the Nintendo Gamecube, and we began to play Warcraft II on the computer together as well as mainstream tabletop games like Blokus.

Eventually we got into games that were less mainstream (and more geek) until our closet was full of games! When we found Kickstarter, we were excited at the idea of new awesome games popping up everywhere that differed from mainstream board games. Our closet has now expanded to a bookshelf.

GD: As a geek dad of a two-year-old, it’s been challenging to find time to have game nights and get people together. Especially since most of our friends also have small kids. How do you balance gaming with your family?

HF: This has been a challenge for us at times. We are both passionate people and sometimes we get wrapped up in new games or game ideas, but there is nothing we are more passionate about than our daughters. It is exciting and fulfilling for us to spend an evening playing games with our two oldest while the baby watches on, and once we have tucked them all in bed (sometimes several times), we will stay up late and play our favorite games or work on designing our own until our eyelids drop.

Most of our gamer friends don’t have children yet, so it’s always a special treat when we can con someone into coming over for a game night. Our siblings have been especially great at being patient while we have random intermissions to get a drink of water for the children or have a repeat singing of their bedtime songs. There is a balance in it all, and we are looking forward to a time when the girls are old enough to play more complicated games with us. In the meantime we are enjoying the memories we are creating as a family of gamers, big and little!

GD: What new things have you learned about gaming from playing games with your daughters?

HF: We have learned that fun is king! Children are excellent at telling you what they think, and our girls are no exception. They are good sports when they win and are quick to tell us which games hold their attention and which ones should perhaps be saved for another time. Our oldest (six) enjoys making suggestions for “house rules” and positing questions about why the rules exist the way they do. It’s fun to see them think outside the box and pick up new critical thinking skills as they learn the importance of strategizing to come out on top and also work together as a team. It’s amazing to see how useful they have been at making critical game play decisions for our own game designs.

GD: Do you and your daughters have a favorite game you play together?

HF: Like everyone else, we’ve been surprised at how well received Robot Turtles was by them. They also enjoy the mayhem of King of Tokyo and are often begging to play as a reward for finishing assignments (we homeschool) and chores.

HF: Those are two very different questions with two very different answers. We started making our own games when our third child was born and Benj took a week off work. We had lots of time together and were playing Fjords (which is an amazing game), and Benj thought in his computer programming brain, “wouldn’t this be fun as a computer game with 3D terrain tiles, and you could add in features like earthquakes and other situation changing circumstances to be able to manipulate the world of the game.” It was a short step from computer games to board games. From there the idea became another, then another. Suddenly we were making prototype games on 3×5 note cards, and a hobby was born!

The idea to have a gaming company was born about the same time. For years we had talked about Benj working from home doing computer programming, or anything really, so we could spend more time together. We thought about it more seriously when MaryAnn was diagnosed with an episodic medical condition which made it more important for him to be home to help out when he could. While we were in the thick of designing game prototypes, we were having so much fun that we thought wouldn’t it be awesome to do this, share our ideas with other families, and make a living doing it? HaleFire Games is our dream job because we love what we do and because it allows us to spend more time with the ones we love–our girls!

GD: Where did the idea for Beardsmith come from?

HF: We share a love of all things geeky and that includes Lord of the Rings. The Hobbit had just come out, and we were talking about dwarven beards (naturally). Benj even got this awesome shirt celebrating the beards of The Hobbit. At one point we wondered if the dwarves did their beard styling themselves, or if someone else did it for them. Then BOOM–Beardsmith! It was originally imagined as an Uno-style game where players play cards building on a beard, then later evolved into a hexagon shaped tile battle of the beard!

GD: Since a lot of our readers are parents, what do you think is the right age range for Beardsmith?

HF: We haven’t had the opportunity to play with many children so the box will likely be labeled as 8+. That being said, we play this with our four- and six-year-old, and they love it and seem to grasp the game mechanics which are very simple. The first time we played with our six-year-old she beat us!

GD: Do you have any plans to release a Print and Play version on Kickstarter or to backers before the end of the KS to get any feedback before finalizing the game?

HF: Yes! We are excited to offer a public and free Print and Play while the campaign is active. The PnP will have simplified artwork and only play up to two players, but we think it will represent the gameplay well and hopefully drive people to buy our game while sparking the kind of feedback that helps products like these to improve (especially with our rulebook as it is so difficult to really know how clear it is without releasing it into the wild). The feedback we have received during our playtesting has been extremely positive, but it is always a good idea to widen the net.

GD: Since this is a brand new company and your first game, I’m assuming you have “day jobs” as well. What do you do when you aren’t making games?

HF: Benjamin currently works for a manufacturing company assembling electronics, machining parts, and doing final setup and inspection of about ¾ of their product. MaryAnn homeschools our two oldest daughters (ages 4 and 6) while keeping the 18 month baby from creating too much mayhem.

GD: Final question. Something along the lines of “Being a geek isn’t about what you love but how you love it,” is sort of the new geek mantra.

HF: We are total geeks about many things. Benjamin enjoys Batman comics and twisty puzzles while MaryAnn loves curling up with a book (Ready Player One, anybody?) and cooking. We both love the original Star Wars, Princess Bride, Star Trek, all things Tolkien and many computer games (Warcraft II was Blizzard’s best product). We are both often caught quoting random lines from random books, movies, and TV shows.

For more details on the game, the campaign and some gameplay videos, head over to Kickstarter!