Following directly out of the events of Mission: Impossible – Ghost Protocol, the fifth installment of the franchise is a fast-moving popcorn-muncher of a film, full of incredible stunts and elaborate double- and triple-crosses from agents whose allegiances are always in question. 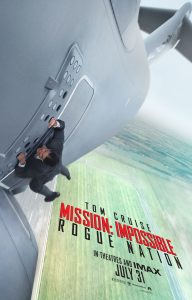 1. What’s it about?
Mission: Impossible – Rogue Nation finds Ethan Hunt (Tom Cruise) attacked by the Syndicate, a criminal organization of ex-operatives from various intelligence agencies, essentially the IMF’s evil twin and a frequent adversary in the ’60s TV series. Hunt goes undercover, intending to shut down the Syndicate with the assistance of former team members Benji (Simon Pegg) and Lincoln (Ving Rhames), while at the same time evading capture by the CIA, which believes the Syndicate does not exist and Hunt is having a breakdown. Hunt alternately pursues, is pursued by, allies with, is both rescued and betrayed by rogue MI5 agent Ilsa Faust (Rebecca Ferguson), who may be a member of the Syndicate, or a British agent under deep cover, or a freelancer working for herself or someone else, or all of the above, as she and Hunt chase after an interesting McGuffin in a story that takes several surprising turns. Meanwhile, CIA Director Hunley (Alec Baldwin) is moving to shut down the IMF and bring in the fugitive Hunt, over the objections of Agent Brandt (Jeremy Renner). Writer-director Chris McQuarrie has created an elaborate puzzle-box of a film.

2. Will my kids like it?
Older ones will. It’s non-stop heart-pounding action that actually has a dense story behind it. Young ones may find it both too intense and too complicated. It’s a film that demands you pay attention or you’ll miss something important to the plot.

3. Will I like it?
Let me put it this way: I’d never seen any of the previous movies, and I liked it so much I immediately went home and started watching them. I was a big fan of the TV version, and Rogue Nation feels very much like an update to the show. It’s far superior to both the first and second film; I haven’t gotten to the other two yet, but I think this one must be at least as good as those.

4. Is the rating appropriate?
Rogue Nation is rated PG-13 for “sequences of action and violence, and brief partial nudity”; the partial nudity in question is when Ilsa changes out of wet clothing and we see her from the back in her underwear. You’ll see more skin in any random ad from any fashion magazine. The action and violence scenes are intense but not gory; there’s very little blood for a movie that includes torture, an attempted assassination, a couple of cold-blooded point-blank shootings and a knife-fight. There’s little to no vulgar language, no sex scenes of any kind, and no drug or alcohol abuse. It’s just slam-bang espionage action of the sort we’ve come to expect from this kind of movie.

5. When is a good time for a bathroom break?
Oh, you’re not getting one of those. The action starts 30 seconds into the film and doesn’t let up, and given the number of double-crosses, twists, surprise complications, and unexpected revelations, you can’t miss a second. The movie is just about two hours long, so do your business before you find your seat, and don’t buy the super-big soda.

6. Do I need to have seen the previous movies in the series to enjoy it?
Nope. Everything you need to know is explained as you go. That said, most of the good guys have appeared in one or more of the previous films, so seeing those will give you a deeper understanding of their personalities and relationships. The bad guys are all new.

7. How is the action?
The film opens with the stunt that’s been heavily promoted in trailers, the scene in which Hunt hangs off the side of an airplane in flight. Tom Cruise actually did this himself, without stuntmen or CGI. The rest of the film features a lot of practical effects, with any CGI being pretty unobtrusive, mostly just to remove safety cables and enhance tech stuff. There are some amazing sequences, with only two moments that took me out of the movie. The first was when Hunt dumps his motorcycle at high speed after a nerve-wracking chase through winding and rather heavily-traveled mountain roads. I’m willing to suspend disbelief for most things; I’ll accept the ultra-realistic masks that can fool anybody, the high-tech gadgets that can do anything, the absurdly complicated security systems they have to hack through, the physical punishment the characters shrug off, but there’s a limit. When somebody gets thrown from a motorcycle at about 100 MPH, with no helmet, no leather jacket, no gloves, boots, or protective gear of any kind, they call that person an organ donor. You’re not walking away from that with just a torn shirt; if you live, you’re looking at major skin grafts, lots of surgery, and years of physical therapy. Most of the things these characters live through are exotic and extreme enough to pass by as “movie magic,” but anyone who has laid down a motorcycle is going to get stuck on this bit. The second such moment was far less exciting: somebody whips out a cell phone in an underground parking garage and gets a signal. That’s a real “mission impossible.”

8. How are the performances?
Like the TV show, all the Mission: Impossible movies are about the plot, not the characters. Any characterization happens in little moments along the way from one action scene to another, so there’s not a lot of opportunity for the kind of acting that wins Oscars, which is to say passionate speeches and dramatic emotional conflict. Within that limited palette, the cast here is uniformly excellent. Simon Pegg proves he’s not just a funny man, he’s an actor of depth and nuance. Jeremy Renner brings a comedic deadpan fatalism to his role, Alec Baldwin plays the same kind of hard-nosed CEO type he’s been doing since before 30 Rock, and the Syndicate leader played by Sean Harris is creepy as hell and a genuine threat. Rebecca Ferguson’s every moment is utterly believable; you can see her struggle between what she wants and what she’s been ordered to do in every close-up of her expressive face. She keeps the proceedings real and the stakes high throughout, and her action sequences are completely convincing; it never feels like the editors have to create her fight scenes for her or hide her limitations. She also handles the obligatory “Dr. No homage bikini scene” (yeah, let’s call it that) without making it sleazy. She could be the next great action star and give Scarlett Johannsen a run for her money.

9. Do I need to stay to the end of the credits?
Nope. It’s just credits all the way down. No extra scenes, no out-takes, no gag reel. The movie’s over and these are the folks who made it.

10. Is the 3D worth it?
Update: Surprisingly, the film has no 3D version; it is available in the large-format “IMAX Experience” at selected theaters. It’s plenty exciting in the regular format.

Watch This: Indiana Bones – Raiders of the Lost Bark