This new and incredible character is none other than Gwen Stacy, from Earth-65, bitten by the radioactive spider instead of Peter Parker, now the vigilante known as the Spider-Woman of her world. 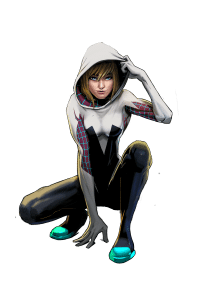 The first time I heard of her was by looking at her costume online, a design by Robbi Rodriguez that has been widely well received (there’s even a LEGO version). I collect comics centered on female characters for several reasons:

1. They are finally here, and I longed for them in my teen years because of their sheer absence. If you wanted a hero who was also a girl, you had to make one up yourself. (And yet, it was a woman in the cover who got me reading comics–my first comic was a Catwoman issue).

2. As these comic heroes progressed, their personalities deepened. My current favorites are Jakita Wagner from Planetary and Jenny Sparks, (and baby Jenny Quantum, yet to prove her potential).

3. As discussed here on GeekDad, their personalities are now more important than their physical appearance, and we are finally starting to get them for what they are: characters with a history, personal motivations, and hidden problems. People we can relate to, who can inspire us, amaze us, and–why not?–entertain us.

Gwen Stacy as Spider-Woman manages all three, and her beginning couldn’t have been more spectacular: 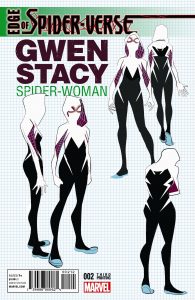 Born in Edge of the Spider-Verse #2 last year, it drinks from the fantastic “what if” well of stories that sport known characters in different roles or from a different timeline. You have to read this comic first, before you start on her number one issue; otherwise you miss a lot of what is going on. (SPOILERS BELOW!)

Besides being bitten by the spider, Gwen is also a member of a band called the Mary Janes. Because of her crime-fighting, Peter Parker attempts to become a super-hero as well, but instead turns into this universe’s version of the Lizard. Gwen stops him, but Peter dies towards the end of the battle, right in front of her eyes. Blaming her for his death, J. Jonah Jameson wants Spider-Woman arrested. Her father, also a police chief in this world, begins a hunt for her. At a gig of the band where she plays the drums, an assassin goes after Captain Stacy, Gwen’s father, who is in the audience to see her play. Gwen defeats the assassin. While they are alone, Captain Stacy holds Spider-Woman at gun point, with Gwen taking off her mask to reveal who she really is.

It is thanks to her stunning début in that storyline that she now progresses in her own series. As is the custom in the superhero comics, the plot gets a bit tangled with other events in the Spider-Verse, where she meets other versions of herself, including a super cute spider-pig. Since I won’t be able to fully explain all of it to you, here’s the Wikipedia entry that cleared it all up for me. 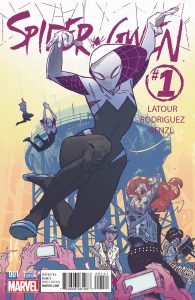 However, Spider-Gwen #1 picks up after the events in the Spider-Verse. After a long absence from her city she begins a hunt for the Vulture, who is terrorizing the place. Mysteriously, Kingpin wants her dead, and her father wants to help her but is now off her case. In the fourth issue, Gwen is finally be able to make some peace with Peter’s death after a talk with his Uncle Ben and Aunt May, and also return to her band.

The series has a T+ rating, and, if I could go back in time and find myself in my teens, I would definitely hand these to me. Latour’s dialogue is fun and engaging–full marks for the way Gwen chit-chats while kicking her way out of trouble. It is the perfect teen talk, something that the real Spider-Man sometimes strains to the point of annoyance. (At least that’s how I find it, but I’m not a teen anymore!)

Her issues are real issues: she wants to play with her band, she is a cop’s daughter and really knows about responsibility and of her duty towards others, she has real conflicts about the death of her ex-beau and about who she wants to become. She is superhero all the way.

Now I really want to see what else is out there in this “All new, all different“ universe. I haven’t had this much fun since Planet Hulk, and that goes way back.

I’m confident that Spider-Gwen and the other new characters Marvel is sporting are all steps in the right direction. And I’m really glad they’re finally here. 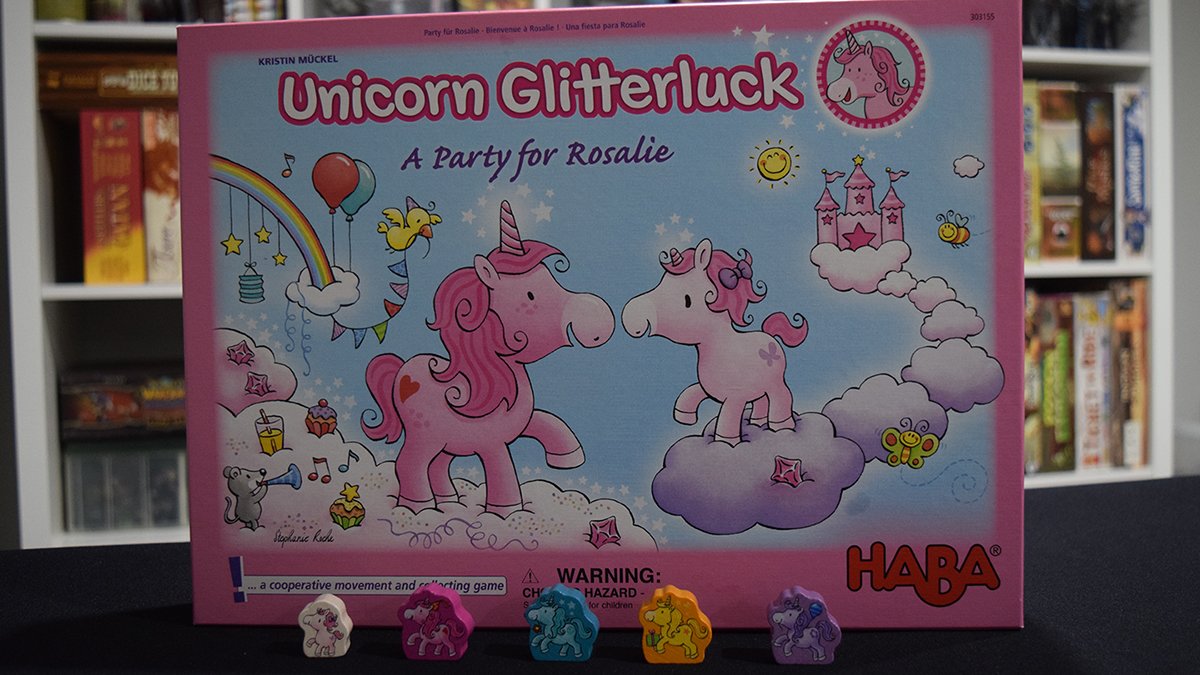 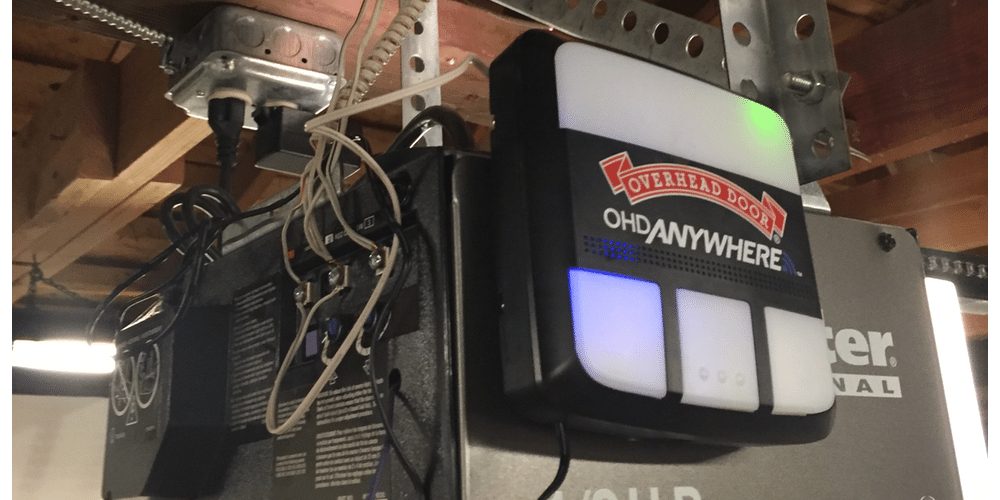