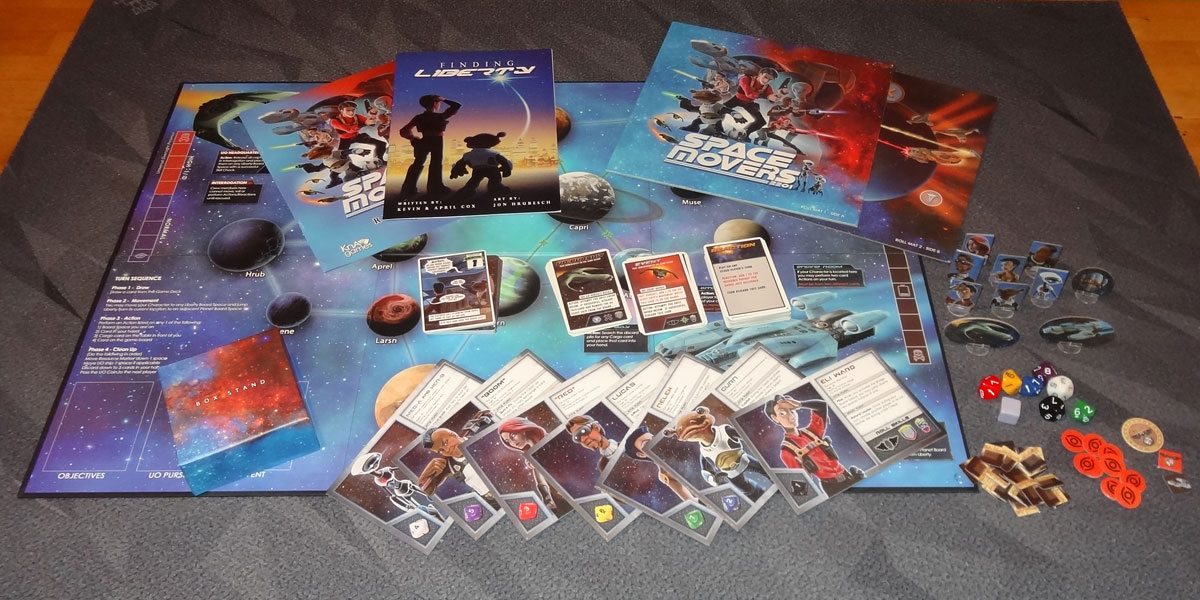 In “Reaping the Rewards,” I take a look at a crowdfunded project in its final form. Today’s title: Space Movers from KnA Games, funded last November. GeekDad Z. wrote about it during the campaign, so you can get an idea of how the game works from his review. I got a review copy of the finished game, so here’s how it turned out.

The components are pretty good quality but not perfect–KnA Games hit a stretch goal to upgrade the character cards and roll mats to thicker cardboard, and the punch-out tokens are nice, too. I did have some complaints here and there, but overall I’ve enjoyed playing the game.

Let’s start with the box itself. It’s a medium-sized box, sized to fit the folded game board. That means, of course, that there’s extra space in it to keep the other components from getting squashed. There’s a cardboard insert to hold all the components to one side–however, the insert was pretty lightweight cardboard and mine got squashed. I actually found a stiff box to put under the insert to keep the board flat.

The roll mats are placed in the box lid when you roll dice for skill checks, and they’re 1mm thick cardboard with various graphics. One side matches the box cover, and the other has a few circles that signify automatic success or failure for dice that land on them. My copy also included the Kickstarter bonus mat, which has a different image of the whole crew on one side, and a more difficult back that includes more failures and even an “injury” symbol.

When you roll dice for a skill check, you take turns throwing dice into the box lid. But where to put the lid if the board takes up most of the table? Space Movers has a simple little solution: a box stand. It’s a small box, open on the bottom, and tall enough that it can fit over any of the tokens on the board. You set that in the center of the board, put the box lid on top of that, and–voila!–problem solved. Once the skill test is over, remove the lid and stand and set them back off to the side again.

The one issue I ran into with the roll mats was that there’s a gap between the edges and the box lid. I mean, this makes sense: the mat has to fit in the box, and the box lid is bigger than the box. But there’s enough tolerance in both places that there’s a substantial gap, especially if the mat slides over to one corner. It’s a big enough gap that occasionally a die can fall into the crack, necessitating a re-roll. I decided, if I wasn’t using the B side with the special symbols, I’d just roll directly into the box lid without the mat, and that works fine.

There’s a short comic book, “Finding Liberty,” which quickly introduces all of the characters and the universe of the game. It’s not absolutely necessary (you could just tell your teammates to imagine Firefly but with different names) but it gives you a bit of the flavor. Some of us weren’t especially thrilled with the fact that the two female characters are both romantically linked to the captain–you get the feeling that if this game were a movie, it wouldn’t pass the Bechdel test.

The Character cards have a number of things on them–the color of the die, plus the character’s rank (as shown on the die), special abilities, and roll skills. There’s also a small bit of bio–name, age, and starting location on the ship. Each character has one ability that can be used on anyone’s turn, and one ability that can only be used on its own turn. All characters have the “strength” and “intelligence” skill, plus one skill specific to them.

The player tokens are simple cardboard punch-outs with plastic stands. I know there was a stretch goal for plastic miniatures for the ships, but but unfortunately the Kickstarter didn’t reach that level. The two ships (the Liberty and the UO ship) are larger ovals, and there’s also a smaller oval for the drone that can be used to deliver cargo.

The Objective cards tell you where to go, and give you a set of goals that must be accomplished to win the game. The first time you play, you can use the starting storyline–it continues the story begun in the comic book. This set of Objective cards has comic book bits on front and back. There was a Kickstarter bonus set of five Objective cards that also has comic book panels on front and back, along with some punny dialogue alluding to Kickstarter. Usually, though, you’ll use a random set of five plain-backed Objective cards. Each one has an illustration and a little flavor text, plus an action accompanied by a skill roll at the bottom. These have various sci-fi references, like the rapidly multiplying small, furry critters seen in the photo.

UO Pursuit and Event cards are shuffled into the regular deck, and have to be dealt with when they crop up. UO Pursuit means that you’ll increase the UO presence on the board (marking planets with the red “eye” tokens) and putting the UO ship on the board, where it will move toward the Liberty at the end of each turn. To get rid of the ship, you’ll have to pass the skill check shown on the card–these can vary in difficulty, though the rest of the card’s effect is the same.

Event cards can do a number of different things: sometimes you’ll have a chance to earn some extra resources; sometimes your computer stops working and you can’t play reaction cards. Whatever it is, you’ll want to deal with the Event as soon as you can, because if another one crops up before you resolve the last one, you’ll lose resources. The Event cards all have different illustrations on them with some flavor text.

Cargo cards tell you three things: where to pick up cargo, where to drop it off, and how many resources you’ll get for making the delivery. That said, there’s a lot more text on them than seems necessary, and they all look the same. It would have been nice to have maybe some art or, better yet, a small diagram showing roughly where the pickup and drop-off locations are on the board to make them easier to locate.

Reaction cards can be played on another player’s turn, and they can affect die rolls, delivery payouts, event cards, and more. These cards are also pretty boring looking, with just some text explaining the action. I could have done with a little flavor on these, even just a title for each card.

The board itself is large–it’s a six-fold board, and takes up a good deal of table space. (Hey, space is big!) For some reason, though, the folds on my board don’t quite sit flat and there are some bumps and uneven parts when I open it up. It doesn’t affect gameplay (since you use the box stand when rolling dice) but it’s cosmetic thing.

The dice are 10-sided dice, one per character, with a medical symbol in place of the “0” on each die. The dice are fine, though some of the color on the numbers is uneven (as you can see on the purple “2” above). There’s also a blank six-sided die that you throw at the end of each skill test so that you can attempt to hit an unsuccessful die and try to change it.

The UO Coin marks the current player (though, honestly, we always forget to pass it around) but is also used when the UO ship moves. It always moves toward you using the shortest route possible, but if two routes are equal, you flip the coin to see if it goes right or left. I really liked the two mottos on the coin: “Being overseen is your RIGHT” and “Comply to the eye or be LEFT unprotected.” Clever.

I’ve played Space Movers a couple of times now, and it’s been a lot of fun. So far I’ve just been using the basic scenario and the Kickstarter bonus scenario because I’ve had new players, but I’ll move on to the randomized Objectives soon. I think the game generally hasn’t been too difficult compared to some cooperative games, though in one game we rolled fairly poorly and in another we rolled extremely well, hardly ever failing a check.

Space Movers is mostly a pick-up-and-deliver game, but the skill checks are a really fun new mechanic. It brings a bit of dexterity into it, and I had a blast throwing dice at other dice and using the abilities of the various characters. To pass a skill test, every die involved has to be a 5 or higher–and the medical symbol means the character is injured and out of commission until healed. But since you roll one die at a time, there’s always a chance to knock a failed roll in the hopes of changing it. The blank die is a nice touch, giving you one more chance to save a bad roll after everyone has rolled.

This aspect of the game is really the most fun and the most tense. I’ve had cases where a die smacked another and ended up causing an injury. I’ve also seen an amazing roll that hit a failed die, jumped over a successful die, and hit the other failed die, turning the test into a success. It’s the sort of thing that makes everyone jump up and cheer when it happens. Those are the moments I really love in gaming.

Overall, I think Space Movers turned out fairly well, even if some of the components miss the mark a little–they get the job done, and you’ll still have a blast playing it. I think next time I play I will probably use some of the variations to increase the difficulty, but it’s a fun time even at the default setting.

Space Movers delivered to backers recently and is making its debut at Gen Con this week. You can look for it at your local retailer, or order from Amazon. Or, if you’re at Gen Con, stop by and see KnA Games on Friday, Saturday, or Sunday, in Hall D: Yellow 1-2.

Take Flight in ‘My Little Scythe: Pie in the Sky’ 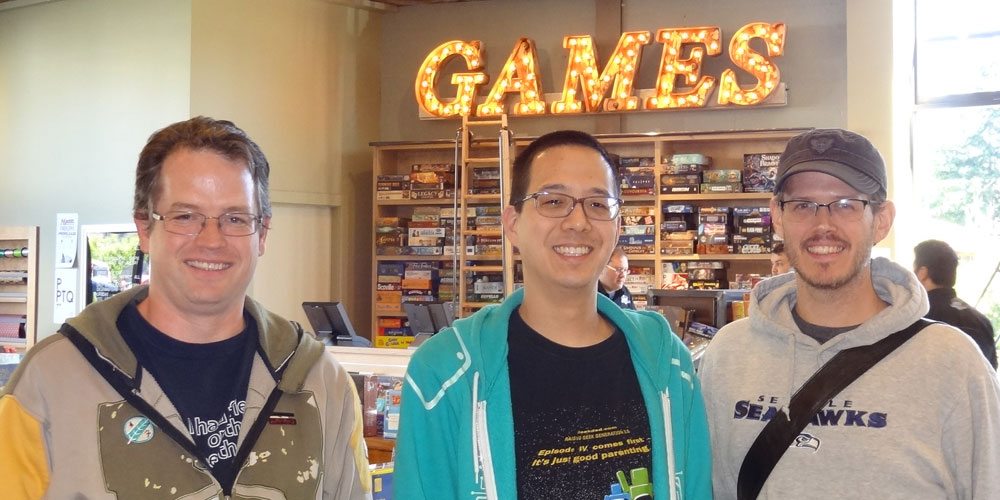