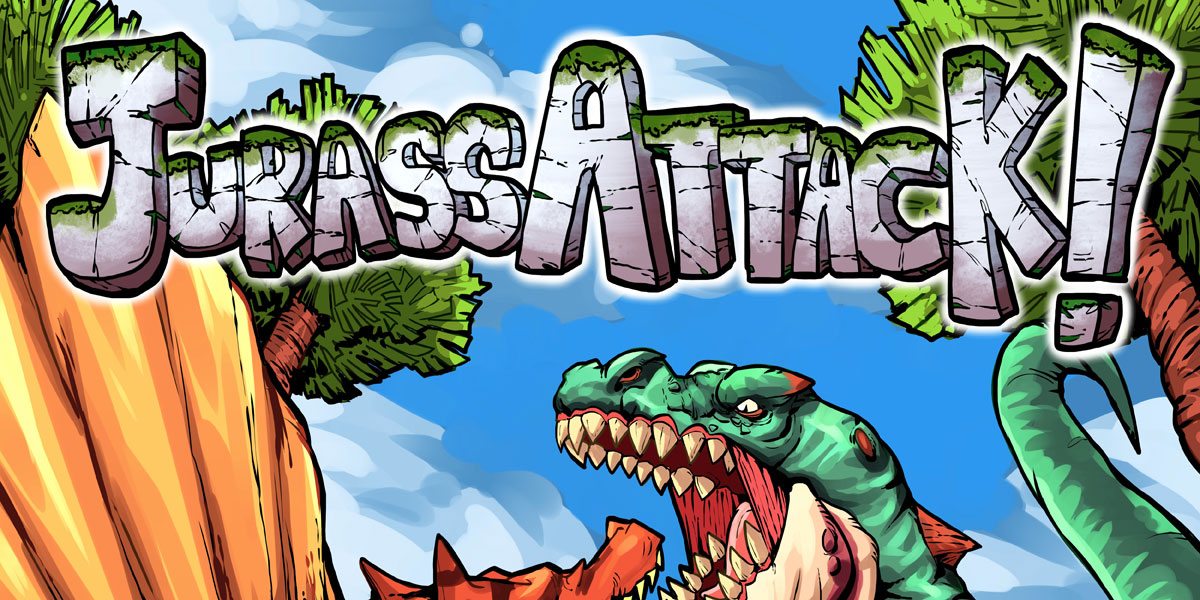 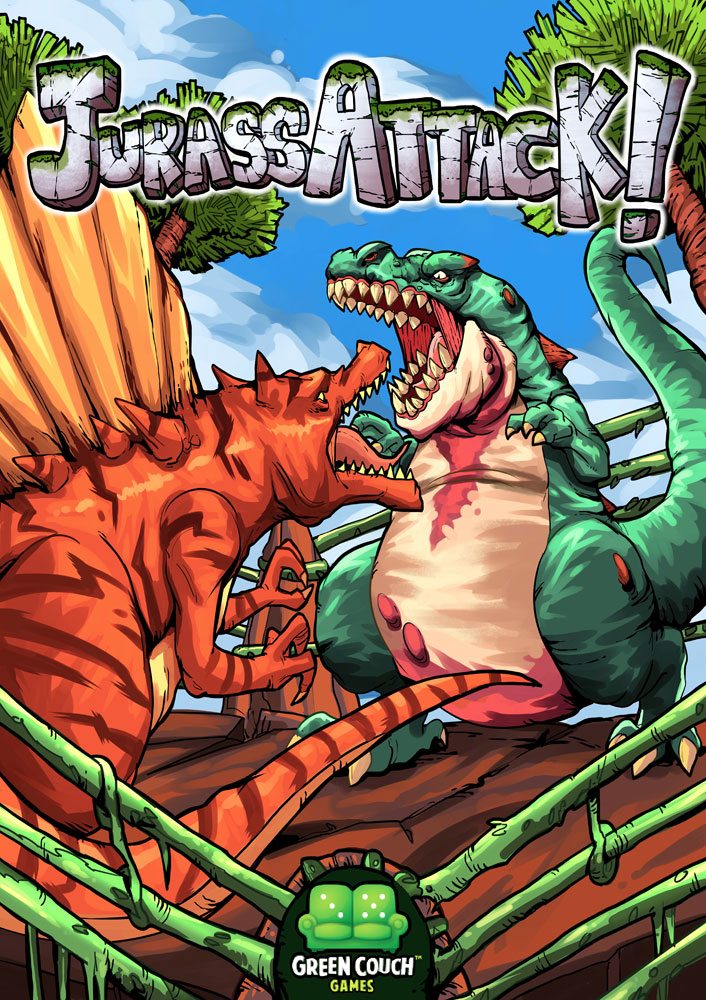 Everyone who watched the trailer for Jurassic World wants to be like Chris Pratt, leading a band of velociraptors on the hunt, right? Well, here’s your chance: JurassAttack! puts you and an opponent in charge of a pack of dinosaurs for a head-to-head battle. Motorcycle not included.

At a glance: JurassAttack! is a card game for 2 players, ages 8 and up, and takes about 15 minutes to play. It’s seeking funding on Kickstarter now, with a pledge level of $10 (plus shipping) to get a copy of the game. The dinosaurs on the cards are aggressive but slightly cartoony, and there’s no gore involved, so I think the age rating is appropriate. It’s designed by Ryan Cowler, and will be published by Green Couch Games (Fidelitas and Best Treehouse Ever).

The cards are tarot-sized cards, so they’re pretty big, allowing plenty of room for the illustration at top and text below. Each card has an attack strength (Ferocity) at the top corner, a point value at the bottom right, and some tally marks indicating how many of that card are in the deck. All of the dinosaurs are very toothy and angry-looking. The card effects are generally pretty straightforward. 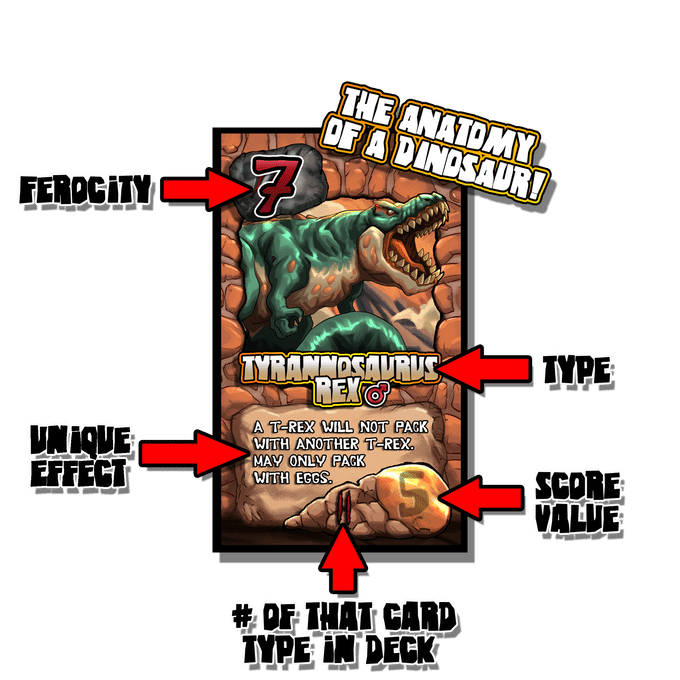 The goal of the game is to score the most points by winning battles.

Each player gets a deck of cards, shuffles it, and draws 5 cards.

A pack of dinosaurs must be of the same type, or else have the ability to be in a pack with others. For instance, the Pteranodon’s power is that it can pack with any other dinosaurs except T-Rex and Spinosaurus. The T-Rex, on the other hand, will not pack with anything except Eggs–not even another T-Rex.

Once both players have selected cards, they are revealed. The higher Ferocity wins. The winner takes all of the loser’s cards and puts them in a scoring pile. The winner’s cards are placed in a discard pile (except for Eggs, which go into the scoring pile, too). Then, the loser draws back up to 5 cards, but the winner doesn’t draw unless they have no cards left, in which case they draw only one card.

Then the next round begins.

Ties are resolved as if both players are “winners”–that is, played cards go into the discard piles (except for Eggs), and neither player draws new cards.

The game ends when one player has no more cards in hand or deck. Higher score wins. In case of a tie, the player with more cards in the score pile wins.

I’ve played this several times with my kids, and we’ve really enjoyed it. My 8-year-old says it’s “extremely fun” and loves the Spinosaurus, which gives you an instant win. My 11-year-old liked the illustrations. Both of them enjoyed playing it, and my 8-year-old managed to beat me more often than not.

It’s a fairly simple game mechanically, so it was easy to teach, and it plays really quickly. But that’s not to say there’s not some depth to it. The “winner doesn’t draw” rule makes for some interesting choices, because when your hand is low you know you might not get a lot of choices if you win. Sometimes it’s to your advantage to throw a fight so you can get more cards into your hand.

The Eggs are an interesting card–they don’t add any Ferocity and they’re only worth one point, but you get to keep them in your score pile if you win rather than discarding them. So you only want to play them if you think you’ll win (or tie), otherwise you’re just adding to your opponent’s score.

There’s a good mix of dinosaurs with different abilities, and it’ll keep you guessing what your opponent has. There are three big dinosaurs: a Spinosaurus and two T-Rexes (a male and a female, worth 7 and 9 Ferocity), but the T-Rexes can be beat if you’ve got just the right combo. If you think your opponent is about to play a Spinosaurus, though, your best bet is to give them as few points as possible–maybe toss them an egg.

We also really liked the Dilophosaurus, the venom-spitter. It’s only a 3 Ferocity, but whether you win or lose, you “blind” your opponent, forcing them to play only one card at random for the next battle.

The only downsides are that, since it’s only a 2-player game, my two older kids and I can’t all play together. And the large cards are fun to use, but a little big for their small hands to shuffle. Other than that, though, it’s been a hit.

JurassAttack! is definitely a keeper for my family, yet it has enough depth for adults, too. For $10, it won’t break the bank, and it’s a good filler game or one that you can take on the go. I could see my kids playing this on road trips, since you don’t really need much table space, just a way to keep track of a deck, discard pile, and score pile for each player.

Disclosure: I received a prototype copy of this game for review. 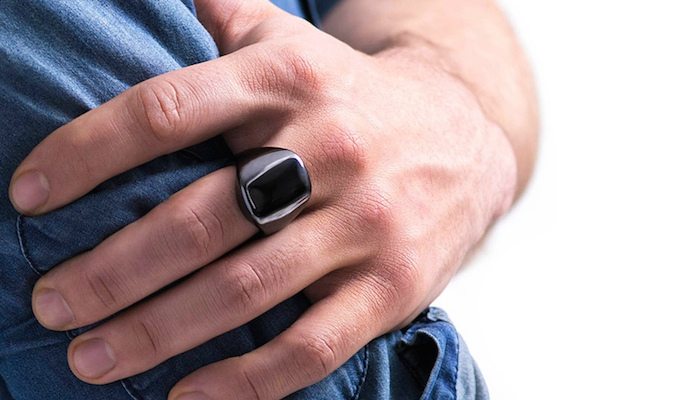 Epic Spell Wars: Hilarious Fun, But Not for Kids