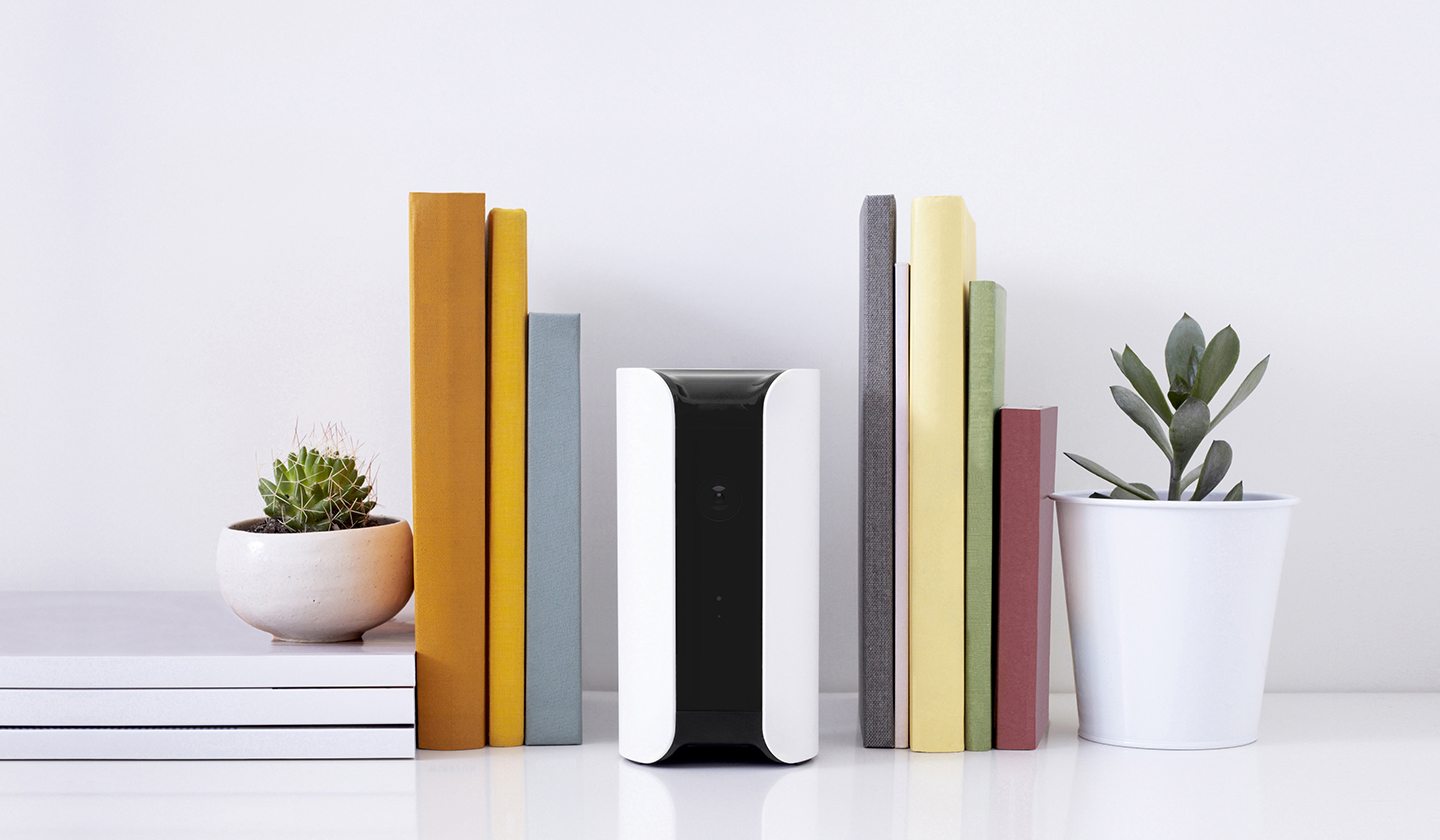 I’ll admit, I’m old enough that I found myself humming the tune by The Police as I tore into my package from Canary. I had a fairly good idea what to expect. Canary was launched via Indiegogo a few years back and has had success in the burgeoning home security camera field (that Nest recently decided to wade into with their acquisition and rebranding of Dropcam). What I wasn’t sure about was how I would use Canary, or if it would even offer that much utility. After all, before you add on monitoring, it’s mostly a DIY security camera, not a traditional security service (though that’s changing – see the announcement at the bottom).

But it’s a nice camera! Unlike the Nest Cam, which I find to be overly utilitarian, Canary’s unit has a suite of environmental sensors, a full-color wide angle camera, and night vision packed into an attractive tower that I see blending with a lot of decors (mine was white, but you can also get black and silver). A ring light at the bottom of the unit illuminates to let you know if it’s armed. Setup is simple. You download the app, create an account, plug in the Canary, and follow the onscreen setup. I had mine up and running in about fifteen minutes (and that was only because I couldn’t remember my home wifi password).

After setup, it’s fairly anticlimactic. Canary will start watching things for you right away, but it won’t send you alerts if you’re home. However, once your registered device (or devices, you can register additional phones or tablets) leaves your home, that’s when things get interesting. 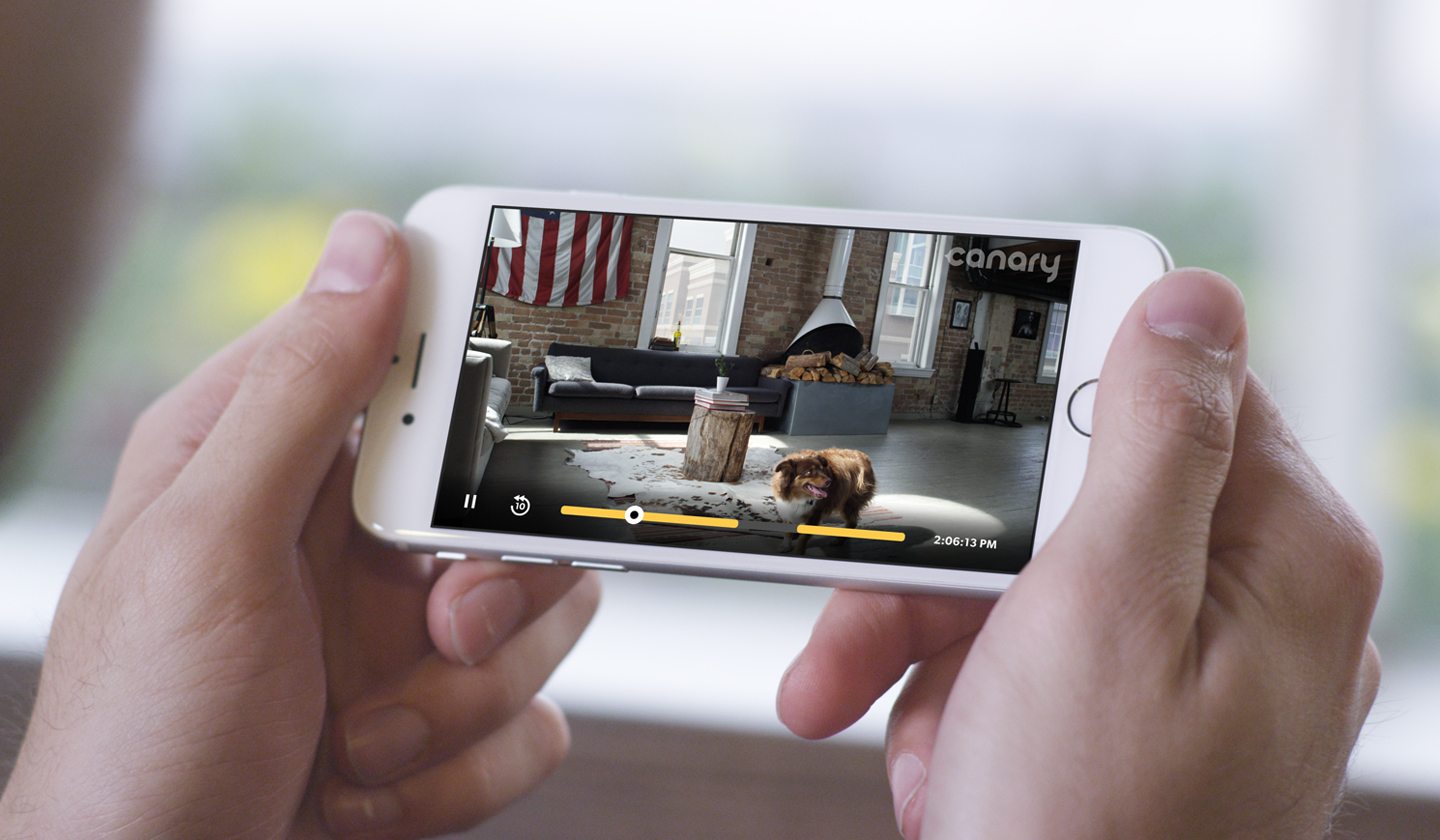 Once all registered devices have left an area, Canary goes into monitoring mode. If it detects movement at your house, it will send you a pop-up notification to let you know something is up. You then can drop into the app, watch the video of the event and either ignore it, sound the 90db alarm, or place a call to emergency services. You can also tag videos so that Canary starts to learn what it needs to notify you about. If, for example, your son starts a marathon Mario Kart session, and the Canary has the TV in its field of vision, it won’t keep bugging you every time there’s a change on the TV screen if you’ve tagged previous similar video events with the “TV Reflection” tag and told the app that everything is OK. It takes some time for the algorithms to start filtering out events; but once it does, you’ll start receiving less notifications.

This is actually a good thing. My wife and I commented that we started ignoring the Canary notifications after the first week because we knew that all was well at the house and that Canary was just being overly sensitive. But what if it wasn’t? What if one of those notifications wasn’t because the cat was wandering to her water dish (again); but because someone was breaking in the side door? Now that I’ve taken the time to train the Canary via the app, I pay more attention when something pops up at the house. It’s not foolproof – with my kids home for summer vacation, I tend to get a lot of activity that I know is just them wandering around the house. But if there’s any doubt, I can always drop in and watch the house in realtime to make sure all is well. 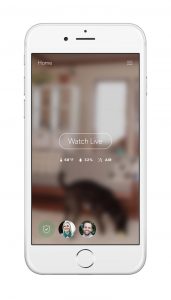 Watch Live is one of the cooler (and somewhat creepier) features of Canary. Creepy in that, unless you set it to privacy mode, you can drop in any time and watch the house, even if your SO or roommates or whoever you’ve made part of your Canary group are there. Granted, there is a light on to let people know that they could be watched at any time…which might actually be creepier, come to think of it. Despite that, Watch Live is indispensable when you’re away. Sometimes the video clips don’t capture enough, or you think you hear something off camera and want to listen for an extended period to make sure everything is OK (or you want to see how the kitchen remodel that your Dad is working on while you’re away is progressing…aaaaand, we’re back to creepy again).

Of course, all of this is assuming that you’re using Canary solely as a security camera. The video is crisp enough that you could also use this to watch your pets (which one GeekDad admitted his wife became addicted to) or to check in on kids or elderly parents to make sure they’re OK. You can even zoom in close enough to read what’s on the TV screen (to make sure your son hasn’t cracked your Netflix password).

The key thing to using Canary is communicating with anyone who will be sharing the space that there is active surveillance, either by you or via one of Canary’s security packages.

Speaking of, Canary has shared with us that, starting today, July 23, they will be offering enhanced security plans, starting at only $4.99 a month (which is insanely low). Current Canary owners will be eligible for half-price plans, making it a no-brainer if you get a homeowner’s or renter’s insurance discount. The free plan is even getting an upgrade to make sure it remains a true security option and that you don’t feel like you’re being railroaded into a pay plan to get necessary features.

The app is getting a robust update too, allowing users to download video directly to their devices – handy if you’ve caught something you want to share (either with your family or law enforcement). Canary is even giving away a trip to the Bahamas for those who share a video caught on their Canary. In addition, there’s new features for organizing videos and events in your timeline; plus a dedicated Apple Watch app.

The hardware is getting a firmware update as well – four months of people tagging things like shadows and reflections has helped the team develop a patch that makes the Canary smarter, which should cut down significantly on Alerts for things like TV flicker and stable shadows (like from a ceiling fan).

My month with Canary left me feeling more secure about my home and I found it to be a surprisingly versatile device. Definitely more than just a security camera, Canary can be purchased directly from their website or via Amazon.

Cool Timeline of Consumer Tech is a Scrapbook for Geeks