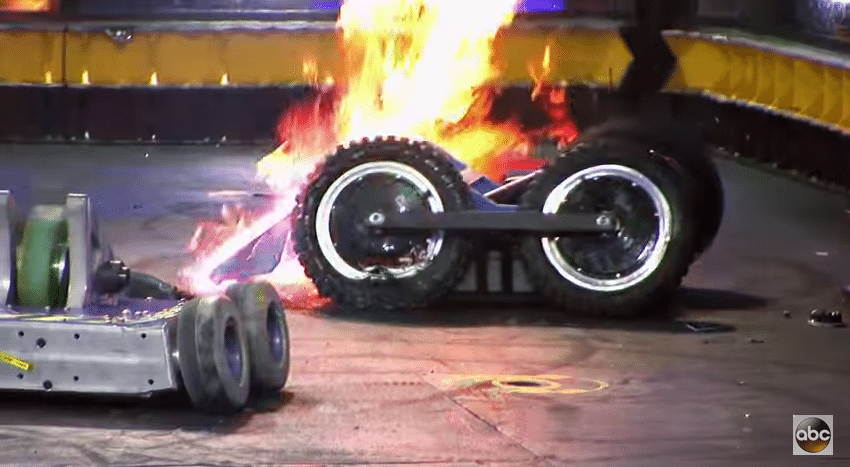 BattleBots week 4 – last chance to get into the great eight. As always, Anton Olsen and Kishore Hari are here to breakdown the best bouts, worst moments, and everything in between. Spoilers galore, so beware if you did not watch.

Kishore Hari: Comic-con just wrapped up with many Battlebots on display. Check out Nerd HQ’s conversation with the producers, hosts, judges, and the builders of Lockjaw and Stinger. There are some mild spoilers in that clip, including the first minute of the Bronco-Stinger match next week, so beware.

Overall, this episode lacked drama, with only one good match – the fast forward button was in full effect. The payoff comes next week with some epic matchups.

Witch Doctor had a wildcard and wins with a KO.

KH: We didn’t get much out of Witch Doctor in the qualifying round with Bronco ending their match quickly (though I LOVED mini Shaman!). Great matchup for them against a wedge and it showed. WD attacked the large wheels and within a couple hits debilitated any advantage Overdrive could have had. I was impressed with the power of the WD 60-pound weapon, something I doubted in round 1. Pretty maneuverable too, more than I expected.

Anton Olsen: I enjoyed this match. Overdrive has a great driver and impressive drive train. Unfortunately their driving skills were not sufficient to ward off Witch Doctor’s spinner or Shaman’s flame thrower. The arena must have smelled pretty bad with all the roasted rubber and paint.

Tombstone wins with a KO.

KH: Sometimes matches go exactly how you expect. Radioactive had no weapon and no defense. Because Ray Billings took it easy, the match lasted a full minute. I guess we know metal beats plastic in advanced RoShamBo.

AO: Plastic versus a 90-pound blade of death and destruction. What else would you expect other than total destruction? I feel that Tombstone pulled every punch just because the match was so lopsided. If he’d attacked aggressively there wouldn’t be anything left of Radioactive bigger than my hand.

Overhaul wins by a KO.

AO: A controversial win by Lock-Jaw and a wildcard for Overhaul lead to a chance rematch between this seasoned veteran and the MIT kids.

KH: REMATCH! Overhaul tweaked the speed of the upper clamp. Lockjaw just made some minor tweaks to their speed. And as Clamps from Futurama said, “Oooo… that’s gotta clamp.” Overhaul pierced the tire, lifted, flipped Lockjaw and waited until KO. BTW does MIT have a class in how to act like you’re from MIT? I really do love the brat vibe, especially when your winning cheer is about n-channels.

AO: First thing Overhaul does is stall one of Lock-Jaw’s wheels by grabbing it and not letting go. The spike of his gripper punctured the tire and made it impossible to get free. Once the smoke pours out of that wheel motor Overhaul readjusts his grip, giving Lock-Jaw a moment to fight back, but he’s soon trapped and roasted to death.

Bite Force wins with a KO.

KH: Match of the show. Hypershock entered the round having to replace all 4 drive controllers. I think they have to replace all 4 again. They dominated the match, pounding Bite Force with the hammer early (though it doesn’t seem like it’s been doing much damage). The spinner finally revved up, launching Bite Force in the air, but Hypershock took damage too, losing a pincer and the spinner. It then became a driving contest. The simple wedge forced load on the replacement controllers of Hypershock, and we eventually got a burnout. A lucky KO given the problems Bite Force had driving.

I need to do the math on the magnetic tread. That’s a common technique in slot car racing, but I didn’t think there was enough metal in the flooring to make a difference.

AO: Good match. Hypershock dominates early, but Bite Force gets in a few offensive hits and takes the match with a KO. Hypershock had made a few emergency repairs and they weren’t durable enough to last the match. As for the magnetic tread. I’ve created a couple bots with magnetic tracks and while the magnets aid in traction, they don’t prevent the bot from peeling off the floor (or wall).

AO: I agree. Tombstone has the reach and power to take care of Witch Doctor’s spinner. I can also see Shaman’s fuel tank exploding. Hopefully with a giant fireball.

KH: This is a walkover. Ghost Raptor seemingly has no weapon, so I can’t imagine they find a way past Ice Wave. The path is clear for IW into the finals as long as they avoid battery/controller problems.

AO: Ice Wave is second only to Tombstone for the horizontal spinners. Unless Ghost Raptor manages to repair his blade it’s going to be a repeat of Ice Wave’s last match.

KH: Lifter-on-lifter crime is coming! I can’t imagine Overhaul’s clamp working on the tread. I bet the Bite Force wedge ends up pushing Overhaul into the hazards to win.

AO: This could be a good match. I’m leaning toward Bite Force because he has more traction, but Overhaul won’t have any difficulty lifting him assuming he can get a grip.

KH: This match is why I watch BattleBots. I’m expecting an instant classic. Stinger should be able to outmaneuver Bronco, but not without a flip or two. Stinger is pretty resilient – I suspect a major upset is coming.

AO: This match will be one for the history books. I suspect Bronco wins, but Stinger is fast and agile so getting under his armor will be a challenge.