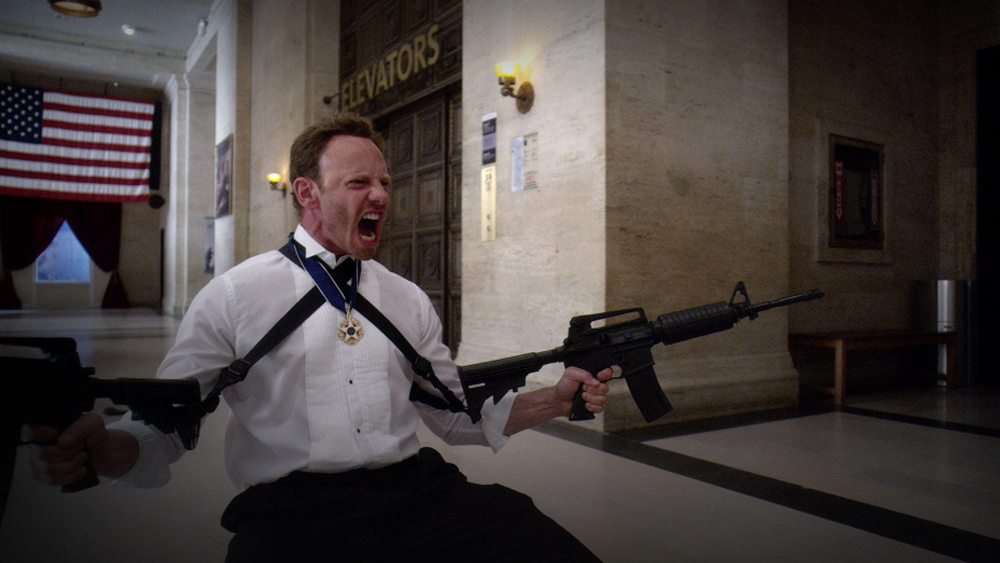 About a year ago, I wrote a little review about a shark-themed sequel coming out the same week as a major Marvel Universe feature. One year later, and nothing’s changed.

This is a very good thing.

Sharknado 3: Oh Hell No! brings us back to a world where sharks have learned to live in tornadoes and eat people on the fly, as it were. And I’m back to tell you all about the b-movie mayhem, and whether or not this is something you want to share with your family.

Sharknado? Really? Why is this even a thing? Syfy has built quite the cottage industry over the last decade making low-budget monster movies, often with ever more ridiculous names and concepts. For example, we enjoyed Ghost Shark, about the angry vengeful spirit of a shark that was brutally murdered by some redneck fishermen comes back to ravage an entire town, appearing ANYWHERE THERE’S WATER. Tubs, buckets, sinks… toilets. You get the idea. Well, it seems that there’s money to be made, and occasionally there’s something so outrageous, yet self-aware, that you get the holy grail of schlock: a movie so bad, it’s good. That was the first Sharknado, about tornado-borne sharks attacking people in LA. Then, to capitalize on the sensation, they made a sequel set in NYC, with more cameos than you could shake a chainsaw at. That was Sharknado 2: The Second One. And now, the threat isn’t just confined to a single city, but a whole series of storms hitting the entire Atlantic seaboard from Washington DC to Orlando, Florida.

It’s a sequel. Do I need to have seen the first two? It wouldn’t hurt to do so, to get the family connections and previous characters. However, it can easily be watched on its own “merits.” By “merits” I mean as a ridiculous, hilarious, cameo-filled monstrosity.

Well, what’s it about? Ian Zerling’s Fin Shepherd (yeah, that’s his name) is headed to the White House to receive the highest civilian honor for his heroics in the last film, and his now-pregnant wife, Tara Reid’s April Wexler, is hanging out with their daughter, and her mom (played by Bo Derek) at the Universal Orlando theme park, waiting for Fin and a family vacation. Then, the sharknados start again, but there are more of them, and they’re everywhere. Fin has to get to his family, and figure out how to stop the sharks from destroying everything.

Okay, then, is it any good? Were you reading above? No, it’s not a good movie, in the sense of plot or character development or, well, most standard measures. But it’s a FUN movie. It’s crazy and outrageous. And when you’re not shouting “OWW!” because someone was just eaten by a shark in some spectacular manner in a place where sharks shouldn’t be, you’re shouting “HEY LOOK!” at the amusing cameos that pop up all through the film.

What about the special effects?: They’re low-budget, TV-grade effects. They wouldn’t stand up against an episode of most modern science fiction TV shows. But that’s not the point. All you need are flying sharks and some blood spatter, and your mind fills in the rest.

Can I watch it with my kids? As always, it depends upon your kids. This is a b-grade monster movie about sharks. There’s a lot of fake blood, quite a few limbs or torsos are bitten through, and people are shown in mortal danger. But it’s completely silly. The movie doesn’t take itself seriously, and while the actors are playing it relatively straight, everything is done with a wink and a nod, so if your kids can understand that kind of movie, then you can have a lot of fun watching it together. 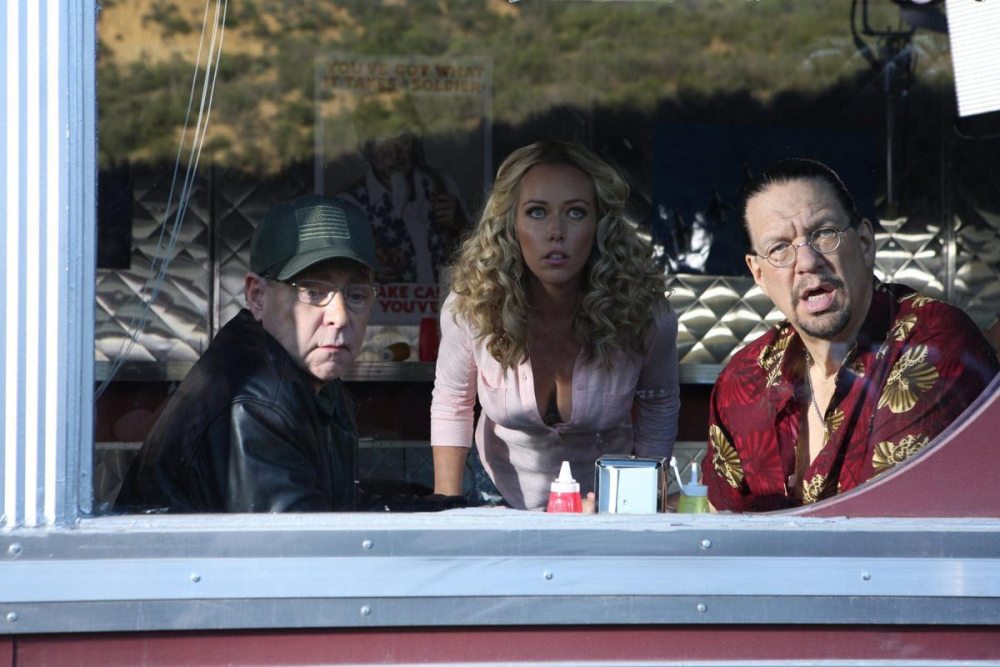 You mentioned cameos. Who all is in it? It’s more like who isn’t in it? I truly think that besides the lead characters, there’s really no one in this film who isn’t technically a cameo. From billionaires to former politicians, TV hosts to sports stars, not a minute goes by without at least one cameo (even a couple of magicians, like above). There are a couple who are geek-specials, too, so pay very close attention.

Is the film scientifically accurate? Well, if you ask Tara Reid, then maybe. If you ask pretty much anyone else, no. No, sharks flying for extended periods of time in waterspouts and eating people on theme park rides, at NASCAR races, or on the Washington Monument are not scientifically-possible events.

Are there any stand-out performances? While a film like this shouldn’t really be evaluated on the quality of the acting, I’ll say I thought Frankie Muniz did a great job in his supporting role. I can only imagine making the transition to adult actor (he’s 29 now – which also makes me feel really old) has been hard, but he’s still got that earnestness that made him fun to watch in his teens. Also, as mad as this might sound, former US Representative Anthony Weiner does a solid job as a harried government employee. No, you don’t have to explain to your kids why he’s famous.

How does it end? That would be spoilers, sweetie. But I will say this: more than any of the previous entries in this series, or I’ll say almost any other such film, the end of this one will truly (as the title suggests) make you yell out loud, “Oh Hell No!” And then laugh your butt off.

Sharknado 3: Oh Hell No! premieres Wednesday night, July 22nd at 9pm (east and west coasts), on the Syfy network. Or start earlier, at 5pm and watch the whole trilogy. Plus, all this week Syfy is showing all manner of their old and new bad monster movies, so you might want to go set your DVR now.