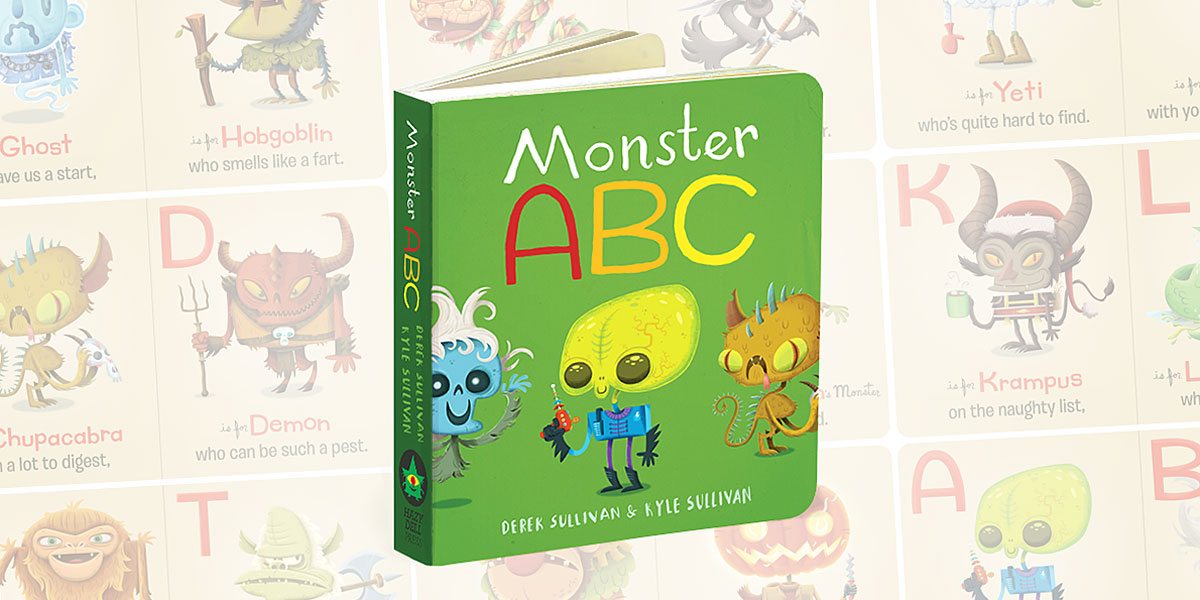 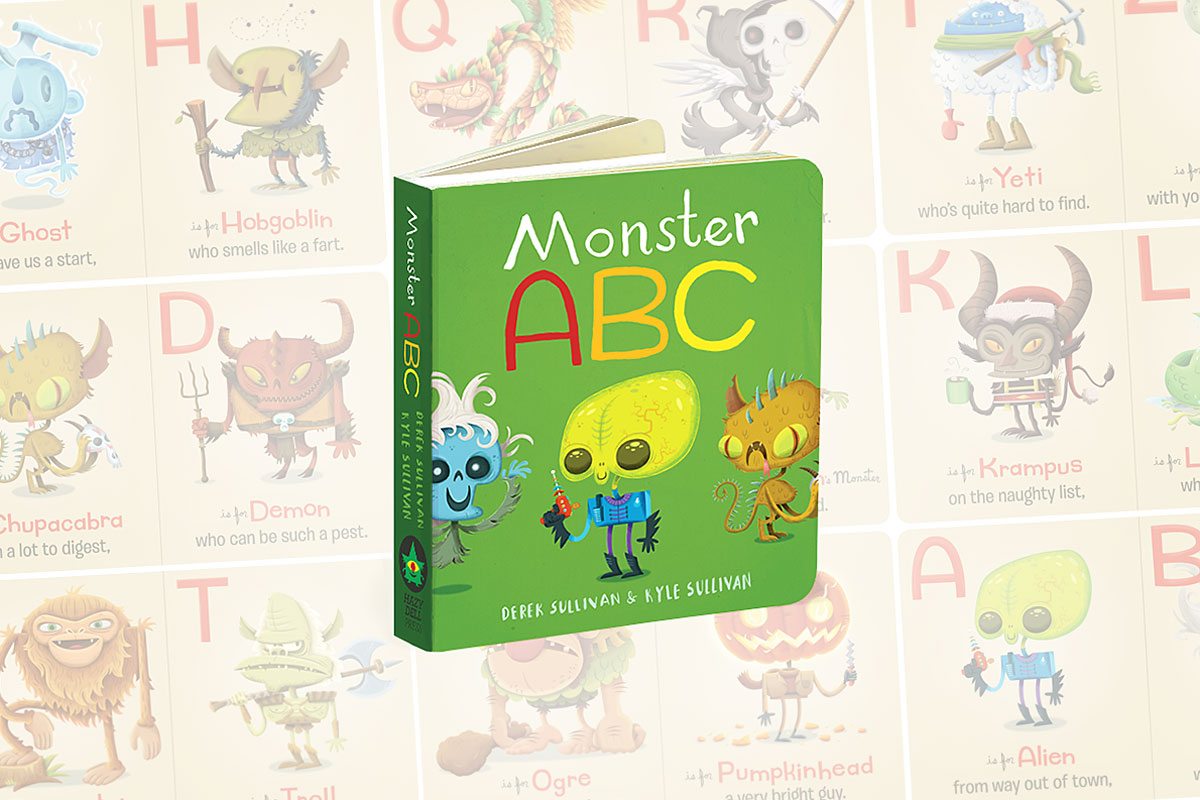 Monster ABC is a new ABC board book from Kyle and Derek Sullivan. Their book is a fresh, fun, and gorgeous take on the ABC book that just launched on Kickstarter.

Kyle and Derek Sullivan are twin brothers–Kyle is the writer and Derek is the illustrator–who have been collaborating on creative projects since they were small children. Their book is 100% complete, and the Kickstarter campaign is to help fund their goal of publishing a high quality board book. 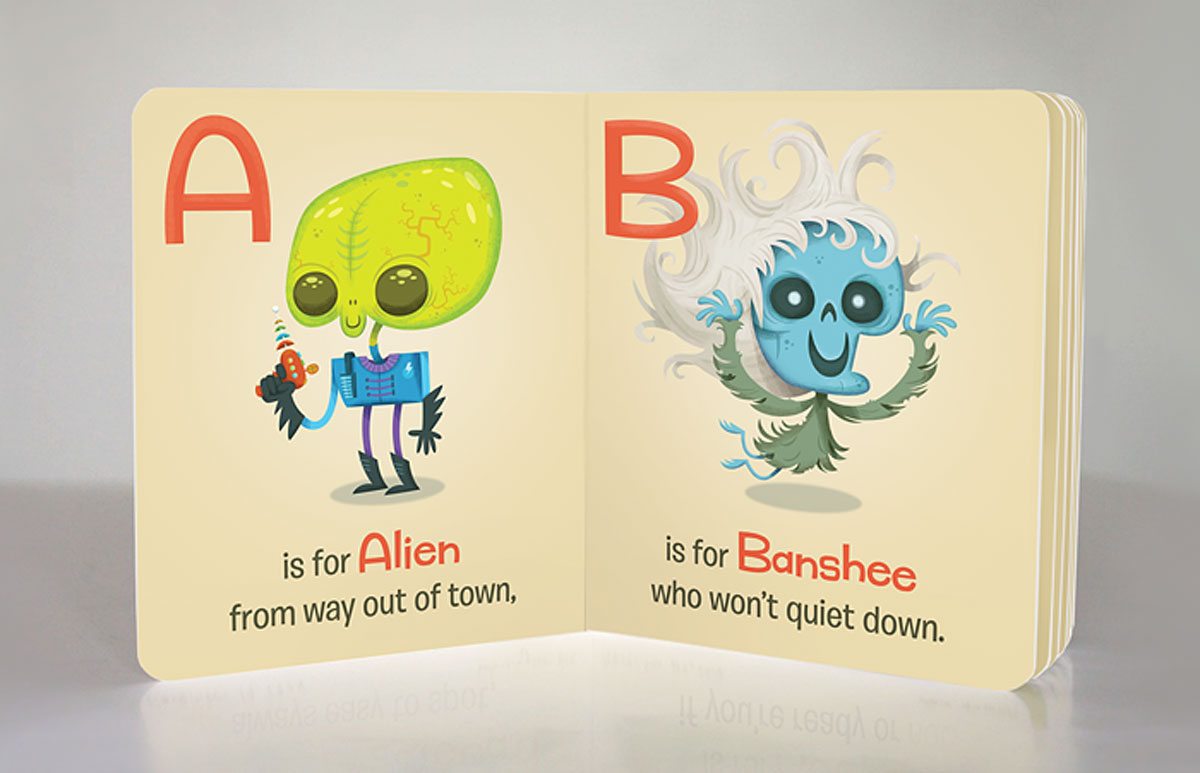 They sent me a PDF of the book to read with my son, and it was a huge hit in our house. Derek’s monsters are delightfully playful yet highly detailed, and are individual pieces of great art. These wonderful monsters are coupled with Kyle’s great rhymes that will not only delight your child but will get chuckles from the adult reader who gets some of the subtext. My favorite page that is a perfect example of this is T–“T is for Troll with comments so rude.” 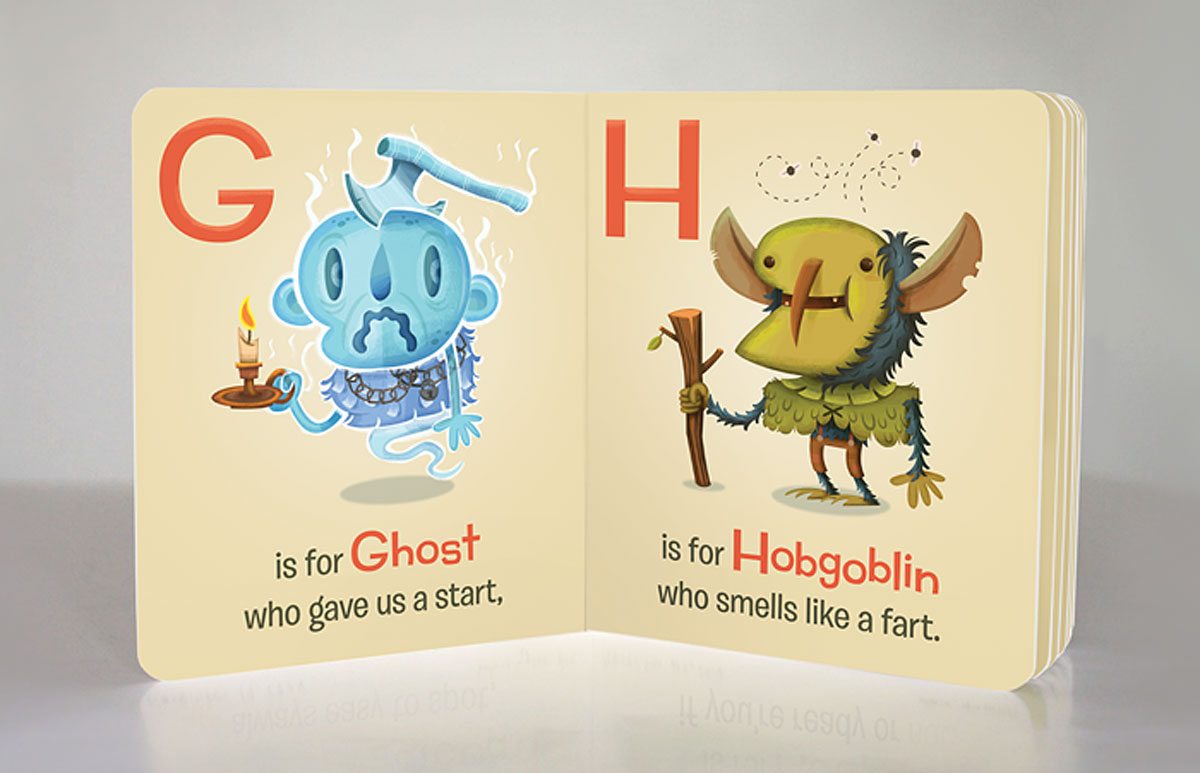 When we got to H which “is for Hobgoblin who smells like a fart,” my son, who is two and a quarter, started to lose it. He made fart noises for the Hobgoblin and then started laughing hysterically. He laughed at every monster through the rest of the book until we got to Z–for Zombie, naturally–at which point we started grunting “braaaaiins” at each other. Reading Monster ABC with him was probably the most fun we’ve had reading a story in quite a while. He loved the book so much that after reading his second story, he wanted to read it again as his third and final bedtime story. And we were just reading it on printed out paper!

The Sullivan brothers were also great enough to let me ask some questions about the book and their backgrounds for a quick interview.

GeekDad: I know you guys have been collaborating together for a long time, but how did you get started writing and drawing together?

Kyle Sullivan: It’s hard to remember that far back, since it really feels like we’ve been creating things together from the beginning. As soon as we acquired object permanence, we were using crayons and colored pencils to make up imaginative worlds.

Derek Sullivan: The earliest I can remember is when we were around four, and we would try to recreate drawings from our Mickey Mouse or He-Man coloring books so we could recolor the same pages.

GD: Has it always been clear who the writer was and who the artist was?

KS: We both have loved to draw from the start. It wasn’t until we were probably 10 or 11 that Derek began to focus on illustrating, and I started to get more satisfaction out of writing. Maybe because Derek became really good at drawing, and I needed to do something else to keep up.

DS: Yep. As twins, people were always comparing us to each other. I don’t know how conscious it was, but I knew that I could separate myself from Kyle a bit with drawing. Especially because he was always better than me at other things like sports.

GD: Do you think it’s easier or harder to collaborate on a project like this because you’re twins?

KS: I feel that it must be a bit easier. When we’re concepting ideas together, I feel that we have a shorthand in discussing how to get from A to B. We have similar tastes and interests (as you might imagine) so it’s that much easier for our visions to align. That said, we definitely have distinct perspectives that make our collaborations all the more interesting and surprising.

GD: Is this the first thing you’ve collaborated on together that you’re “officially” putting out into the world?

KS: We’ve collaborated on mobile apps and a couple of ebooks that we put into the world a few years ago. This is our first Kickstarter project and our first foray into self-publishing.

GD: Where did the idea for Monster ABC come from?

DS: Initially, the idea was as simple as wanting to create an alphabet book for children that wasn’t generic and boring, i.e. A is for Apple, B is for Ball. I thought about what Kyle and I liked as very young kids and silly monsters came immediately to mind. Plus it was the most fun thing I could think of to draw.

KS: Derek had come up with the monster alphabet idea about a year ago, and his illustrations turned out great. When we came together to figure out the best way to build a book around them, we thought of Edward Gorey’s The Gashlycrumb Tinies and the simple but very effective verses he wrote to give his book a really nice rhythm and carry the reader through his beautiful illustrations.

GD: Kyle, do you have any other books you’ve published or any other writing you do?

KS: Besides the aforementioned mobile apps and ebooks, I don’t have anything traditionally published at this point. Derek and I have several children’s books that we’ve drafted and would like to see on bookshelves eventually. If Monster ABC is successful, it will be a huge first step in achieving that goal.

DS: Yep, I’m a full-time freelance illustrator and graphic designer. Recently, I designed the poster for Children’s Film Festival Seattle, and I created a series of murals for the Children’s Hospital of Atlanta. I also do graphic design oriented things like vector icons.

GD: A Lot of us geeks would love to do something we love as a full-time job; is this what you guys do full-time, or do you have other jobs as well?

KS: I work as a copywriter for an agency in Portland, Oregon. I love writing and creating more than anything, so it feels good to have a job that lets me collaborate with really talented people and flex those muscles on a daily basis. That said, working full-time on projects like Monster ABC would be a dream come true.

DS: I’d love to say that everything I do is as fun as Monster ABC, but I’d be lying. I love being a freelance illustrator, though. Monster ABC just happens to be the peak on the mountain of fun projects.

GD: Something along the lines of “Being a geek isn’t about what you love but how you love it,” is sort of the new geek mantra. Do you have anything, besides writing and illustration, that you consider yourselves geeks about?

KS: So many things. I’m a huge movie and book geek. I went and got an M.A. in literature mainly because I love books enough to devote two years of my life doing nothing but reading them and writing about them. And, obviously, Derek and I are both huge fans of everything monster-related. As kids, we were convinced that alien abduction was a real threat and that Sasquatch was lurking in the forest.

DS: We’re both huge fans of A Song of Ice and Fire as well as the Game of Thrones TV show. I’m also eagerly anticipating the BBC TV show Jonathan Strange and Mr. Norrell because I was such a huge fan of the book. Also, I love video games, specifically stuff on Nintendo consoles.

GD: Kyle, do you have a favorite movie or book that’s most influenced you and your own writing?

KS: The Oz books by L. Frank Baum and Ruth Plumly Thompson were my first reading love as a very young person. Derek and I both were enthralled by the unbridled imagination of those books. Both writers painted a world in which anything could happen, but still felt very real and grounded because of the attention to detail and well-realized characters.

GD: Derek, do you have a favorite Nintendo game or one that’s most influenced you and your art?

DS: I think the Nintendo game that has most influenced my work is The Legend of Zelda: The Wind Waker. The character and world design in that game was mind-blowing to me when it came out, and it still holds up. It’s a really nice balance of cuteness with an edge that I try to aim for in a lot of my work. I was really excited to replay it when the HD reissue came out a couple of years ago on the Wii U.

GD: Do you guys have any upcoming conventions or appearances you want to tell people about?

DS: This upcoming weekend (June 5th-7th) I’ll have a booth at the Tacoma Convention Center at the NW Pinball and Arcade Show. I’ll be selling prints and posters, including some Monster ABC stuff.

GD: I know you’re in the craziness of launching your KS and getting Monster ABC published, but do you have any future projects in the works?

KS: We have a few children’s book projects in the works. We have a couple of books storyboarded for a slightly older audience than Monster ABC‘s target range of four to five-years old. We’re really excited about them and hope to either find a publisher, or once again turn to the Kickstarter community, who has already been so supportive and inspiring.

In addition to goals for the book itself, there are also prints, vinyl stickers, and coloring pages available as rewards. If you have a child who loves monsters and ABC books, I highly recommend heading over to the Kickstarter for more details! 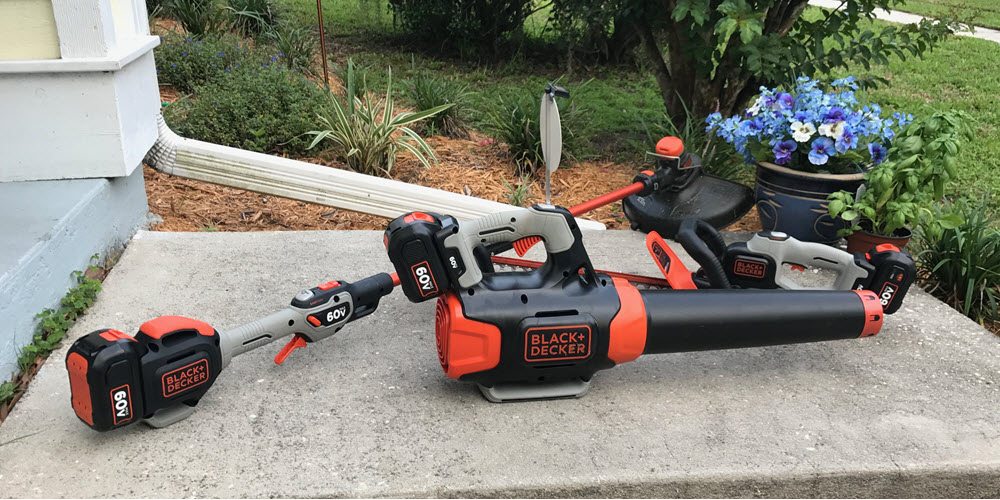 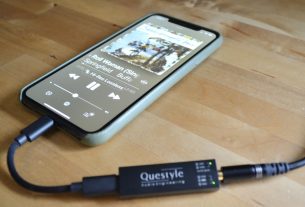