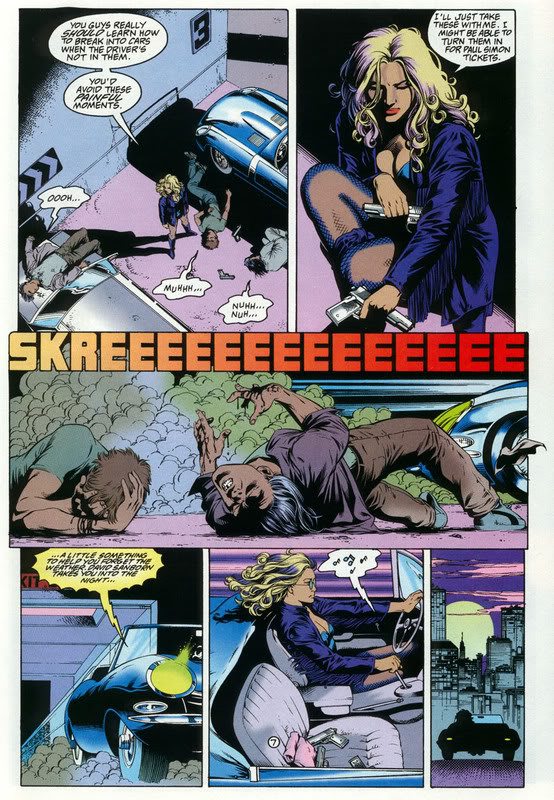 Black Canary #1 featuring the sonic-powered heroine fronting a rock band is yet another unusual and unique turn for the heroine who’s been around since 1947.

This new version isn’t quite the Dinah I know and love—not yet. However, the signs are there, and the killer artwork by Annie Wu and the attention to detail in the plotting and characters won me over.

That’s not an easy thing to do, given her complicated history.

I’ve been reading about Canary since at least 1975, but she’s been breaking the rules since she was created by Robert Kanigher and Carmine Infantino.

She’s a female character with her own identity, rather than being spun off from a male superhero. No Bat-, Super-, Hawk-, etc. in front of her name. When she first appeared, she was thought to be a villain, but ended up being undercover to catch the villains. She quickly became popular enough to join the Justice Society of America. Golden Age Black Canary was in the tradition of the classic heroines of film, played by Barbara Stanwyck and Rosalind Russell.

She’s also one of the tiny number of female heroes who’ve survived from the Golden Age to the current age of comics, to the point where she was revived along with the other Golden Age characters in the 1960s when the alternate reality, Earth-2, was first created.

But her characterization, background, history, and even identity have all changed at one point or another through various retcons and re-imaginings, of which this new version is the latest. (The television versions are a whole post on their own.)

Here are my best and worst:

Dinah Drake is the Golden Age version whose daughter, Dinah Laurel, took up the mantle of Black Canary after DC fused its multiverse into one universe in the 1980s. Not only did this generational shift reverse the worst retcon ever (see below), but it made Canary a rare female legacy character, and explained her super-powered Canary cry as due to exposure to her super-powered “uncles” in the Justice Society of America.

This provided Black Canary II with not only a legacy, but also mentorship and teachings from the JSA, an experience that made her unique among the new generation of heroes in the original Justice League of America.

When DC still had the multiverse, team-ups between the JLA of Earth-1 and the Justice Society of America of Earth-2 were annual events. In one event, Dinah’s husband, Larry Drake, was killed. Full of grief, Dinah leaves Earth-2 to take up permanent residence in Earth 1.

It’s not a great story by any means, but it led to Black Canary becoming a regular member of the Justice League of America and ensured her monthly appearances in that title for nearly a decade. (This is where I first encountered her.) It also led to her relationship with Green Arrow, an unusual one at the time because it featured an older widow becoming involved with a younger man. This would eventually be flipped after the Crisis on Infinite Earths when the younger Dinah Laurel Lance was slotted in place as the older Green Arrow’s lover, which sadly changed the power dynamic. One of the few drawbacks to that retcon.

This may turn out to be as important as the first two, but given there’s only been one issue, I can’t put it higher. However, this is the first sign that the awful characterization of Black Canary after the New 52 reboot might be overcome.

So while Canary as rock star wouldn’t have been my first choice of profession for her, the first issue brought back her compassion and her need to protect, not to mention her sense of fun. Here’s hoping that the generation reading this Canary becomes as fond of her as I did of Dinah Laurel Lance.

1. DC apparently wanted to de-age Black Canary and this is the best they could come up with? No wonder it didn’t last (1983).

The full story is here but, in short, once upon a time, Dinah and Larry Lance had a baby daughter cursed with a horrific sonic cry that destroyed everything around her. Desperate for a solution, the JSA got together and put baby Dinah into interdimensional statis where her body grew to adulthood, but her mind… was blank?

In any case, to save the elder Canary, the JSA brought Dinah to the same dimension where her daughter’s body floated and switched their minds. This meant that elder Dinah was reborn in her daughter’s mindless (?) body, while the older body with the infant (?) mind died. To prevent any angst, Dinah’s mind was wiped so she didn’t know about the swap. She eventually finds out and says, “Don’t tell Ollie.” (Oliver Queen, Green Arrow.)

Arrow, Dinah’s lover, apparently never noticed the change or that Dinah grew younger. And it was never spoken of again, but this story was so awful that almost immediately post-Crisis, we received the retcon of a retcon in which Dinah Sr. died of cancer and passed on her legacy to her daughter, Dinah Laurel Lance. No more swapped bodies. Whew.

This new Black Canary isn’t her first regular series. She received a solo series in the early 1990s series of which we will speak no more, except to present you with this artwork to the left.

It took over 100 issues of Birds of Prey and a new role of leadership in the Justice League to put Dinah firmly at the front of the heroes of the DC universe. She was a legacy heroine, she had relationships with practically every hero, and considered the first generation of heroes her uncles and aunts. She had an off-again, on-again, off-again relationship with Green Arrow, but she also had a big sister-type relationship with Roy Harper and Mia (Speedy).

All that character development and her place in the DC comic universe was wiped away in the New 52 reboot.

Her entire relationship with the JSA as her “uncles” vanished, she was given her code name by Penguin (ugh!), she instead had a romantic history with a nobody called Kurt Lance, and nothing remained of her relationship with any of the Arrow cast of characters, particularly Roy Harper. (To be fair, Oliver Queen didn’t have much of a relationship with his original supporting cast for a long time either.)

More, she no longer seemed the same character, emotionally, stuck in a revival of the Birds of Prey that was the former team in name only, and instead she had a long background as a spy. Worse, she turned downright mean in the pages of Batgirl.

Though I’ve ranked this one as number three in the worst list, this one hurt me the most because Canary had her prominence and background in the DC universe, in the making for nearly 80 years, pulled out from under her.

I’m hopeful this new series does everything it can to reverse that trend.

A Shortcut to Mushrooms

A Nod to LEGO in this Minimalist Apartment

From Pregnancy Disaster To Newborn Wonder