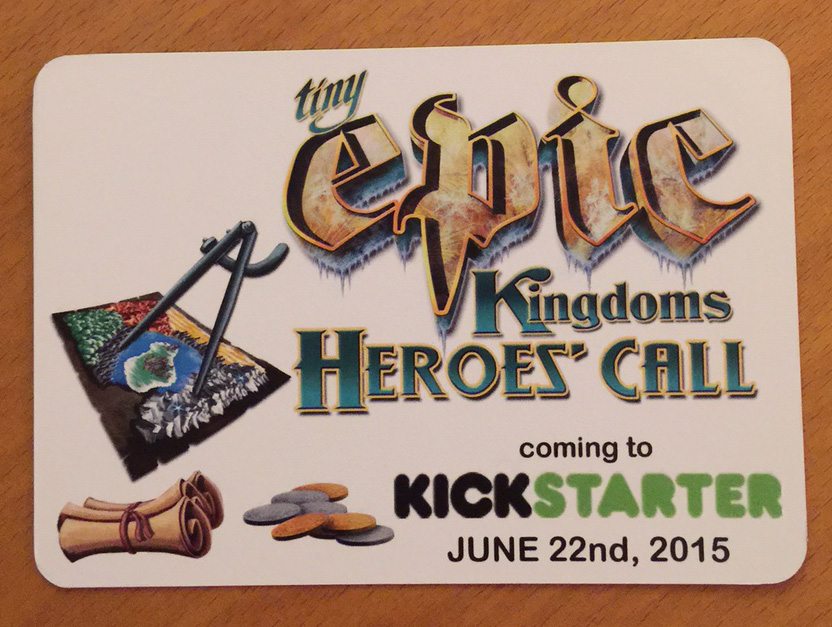 Tiny Epic Kingdoms is a Euro-style 4X game. Players eXplore, eXpand, eXploit, and eXterminate as they build the highest towers, claim their territory, and sometimes knock each other down a peg. This instant classic hit the shelves in 2014. And today Kickstarter launches a booster shot of awesome with the expansion: Heroes’ Call.

Heroes’ Call adds five new races, five updated territory cards, Hero meeples, and several upgrades to mechanics. The expansion is mostly stand-alone equipped, provided you have a the original rules. Oh, and did I mention? There are 15 new Hero Cards, allowing players to take on classes for the first time.

The basic mechanics remain the same. In each round, five of the following actions must occur:

The new races are Frost Giants, Draconian, Bird Folk, Lion Kin, and Polar Kin. Each of these races has a new unique set of Magic abilities.

The territories also got a makeover, now with snow-covered art, and zones of Tundra and Silver Peaks, the two new terrain types. Meeples in the Silver Peaks gain Silver, a new wild-card resource, with 0 value in war, but being useful in all other aspects. The Tundra is hotly contested, and a bit dangerous. Instead of the normal two meeples, the Tundra is only capable of hosting one meeple at a time. When a player gathers resources from a Tundra, they gather whichever resource they like. Alas, the cold is too harsh for long lasting residence. Every time a player quests or patrols, you must move the meeple, which means you won’t ever be there for long. It’s also a risk, because it can force your meeple into another player’s territory, leaving you vulnerable to war.

The Hero Cards feature 15 classes of Hero. These classes cover everything from Ranger to Queen. Each player starts with one class, and must retire their current class before starting another. Each retired class is worth 3 victory points at the end of the game. The Hero powers add abilities which enhance play, but require resources and time to level. The diversity of Hero powers ensure a unique game every time.

And just in case the normal rules of combat aren’t enough for you, any player can attack their opponents’ Towers. Each time a player builds a level of the tower, a new Tower meeple is placed on the field next to the player’s meeple. If these Towers are destroyed, you lose the progress you’ve made on your tower. Keep your strategies close on this one, because the first tower to level 6 finishes the game!

The key to success in Heroes’ Call is flexibility. Different races, classes, and goals will change your strategies in a fluid way throughout the game. The challenge is to keep up.

This expansion hits Kickstarter today, and a backing of $16 will secure you a copy of the base expansion. Check out the stretch goals and higher backing levels to find your place in what is sure to be a line in the history of pocket-sized games.

Education Week: To Teach or Not to Teach? That is the Question…