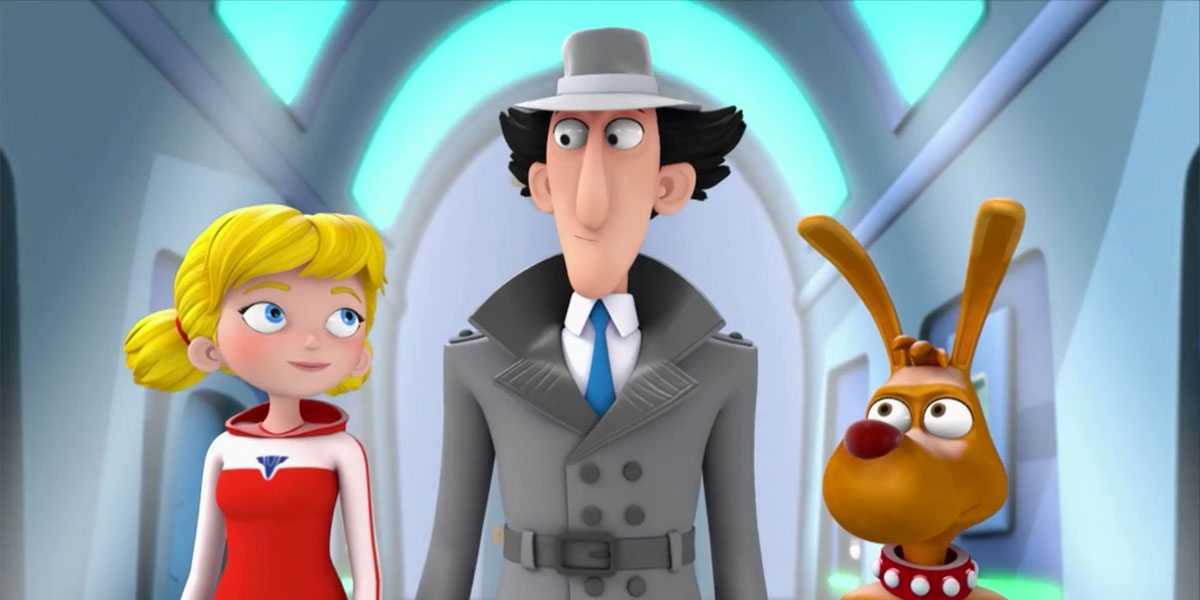 I just joined the Netflix Stream Team this month–basically I get a free streaming account, and then I can write about whatever I’m watching. Lately I started re-watching Chuck (after listening to the soundtrack and feeling nostalgic), and I’m also catching up on the second season of Agents of S.H.I.E.L.D. (By the time I finished Season One, I’d missed the first few episodes online, so I was glad to see the new episodes show up on Netflix. Shhh–no spoilers!)

But one of the things that Netflix sent caught my attention especially: some Inspector Gadget T-shirts. My kids have heard me talk about Inspector Gadget (and sometimes I sing the theme song) because it was one of my favorite cartoons growing up, but they hadn’t actually seen it. I figured the T-shirts must mean that the cartoon was now available to stream, so I went to take a look.

In fact, Netflix has a new Inspector Gadget series. So last week my kids and I sat down and watched some Inspector Gadget–we started with the first episode of the original cartoon (I’m sure this YouTube version is totally legit) and then watched the opening of the new series. The new series is 3D animated rather than hand-drawn animation, and I was both curious and a bit wary of how it would turn out. I also wondered how the original would hold up–after all, some of the cartoons I loved as a kid have turned out to be not so great now that I’m an adult.

So, first: the old episode was pretty much like what I remembered: bumbling Inspector Gadget, poor Brain the dog wearing ridiculous costumes that somehow manage to fool Gadget, Penny hard at work with her computer book and giving Brain instructions, Chief Quimby getting constantly blown up by his self-destructing messages, and of course the enigmatic Dr. Claw. The animation isn’t amazing, but it does the job, and I was pretty tickled when I heard the opening notes and saw the flashing light moving through the street in the opening sequence. My kids thought it was pretty hilarious–the first episode involved Dr. Claw trying to sabotage the Winter Olympics by replacing the torch with dynamite.

Then we cued up the new series. The 22-minute episodes are actually divided into two stories each, but the opening is a two-parter. It seems odd that Netflix didn’t just have them as 11-minute episodes, since they’re not bound to particular lengths per show. The new theme and opening animation reference the original show, but the theme has been changed. (Personally, I like the original theme song better.)

The show opens with Dr. Claw popping up in Antarctica, where he’s been frozen since being defeated by Inspector Gadget years ago. Meanwhile, Gadget himself has retired, and Penny is now in training as an agent at HQ. But when Claw pops up on the radar, Gadget is recruited and again dons his familiar grey suit.

Warning: some spoilers ahead–you can skip over the next paragraph, though honestly these are things that you’d probably figure out pretty easily while watching the show.

A new character shows up at HQ: Talon, a teenage boy who’s got martial arts skills and a grin that catches Penny’s eye. He’s pretty quickly revealed to be Dr. Claw’s nephew, infiltrating HQ to figure out where Dr. Claw’s claw is, so he can retrieve it. Some of the humor involves Talon questioning why Dr. Claw does things a certain way–like setting a countdown for 100,000 seconds instead of 2. It reminds me a little bit of Scott Evil in Austin Powers, trying to bring evildoing into the modern age.

I think the show’s humor translates pretty well into the new version, and there are some fun references and nods to the original series. I appreciated the fact that the new series is introduced as a sequel, not a reboot. Penny’s book computer has been replaced with holographic screens, though Brain still has his goofy costumes. The voices are done pretty well. Ivan Sherry does a pretty good Inspector Gadget, and Martin Roach’s Dr. Claw has the same growly voice, though maybe a little sillier.

I wasn’t a huge fan of the animation itself, though–it’s not top-of-the-line computer animation, and reminds me a little of early-stage Veggie Tales. I also didn’t really care for Penny’s infatuation and flirtation with Talon, and my girls (11 and 8) thought it that was kind of lame, because they’re still at the age where romance is gross. But overall, we all had fun watching it, had a lot of laughs, and my kids want to watch more of both the original series and the new one. I was definitely relieved to find that new Inspector Gadget was fun to watch and didn’t feel like it destroyed my childhood memories, but the new look will take some getting used to.

2 thoughts on “The Return of ‘Inspector Gadget’”