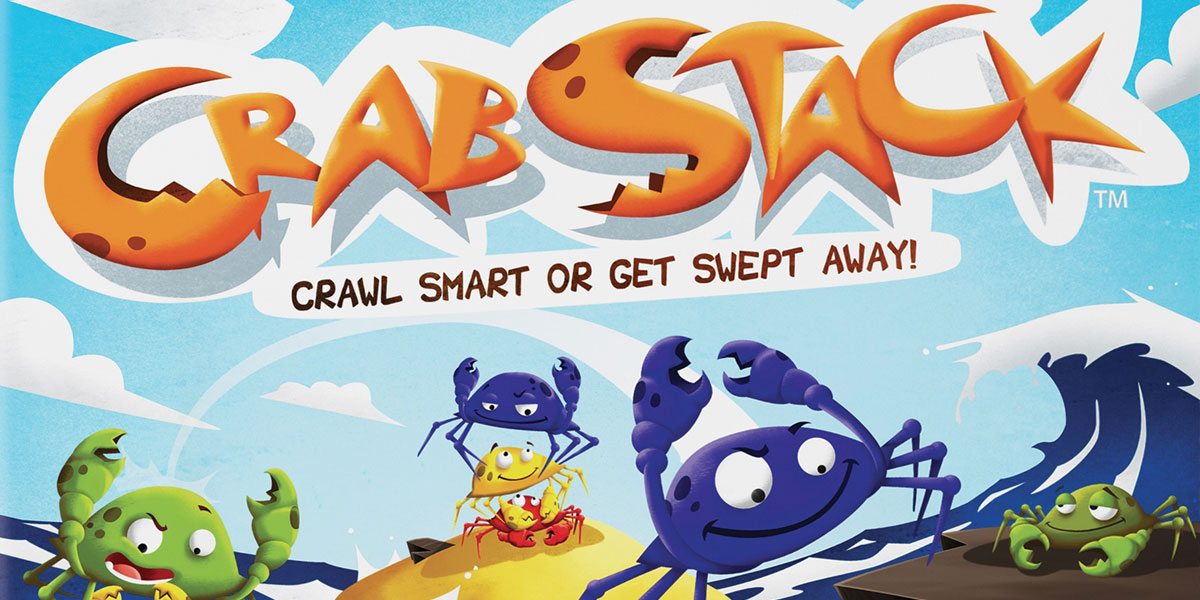 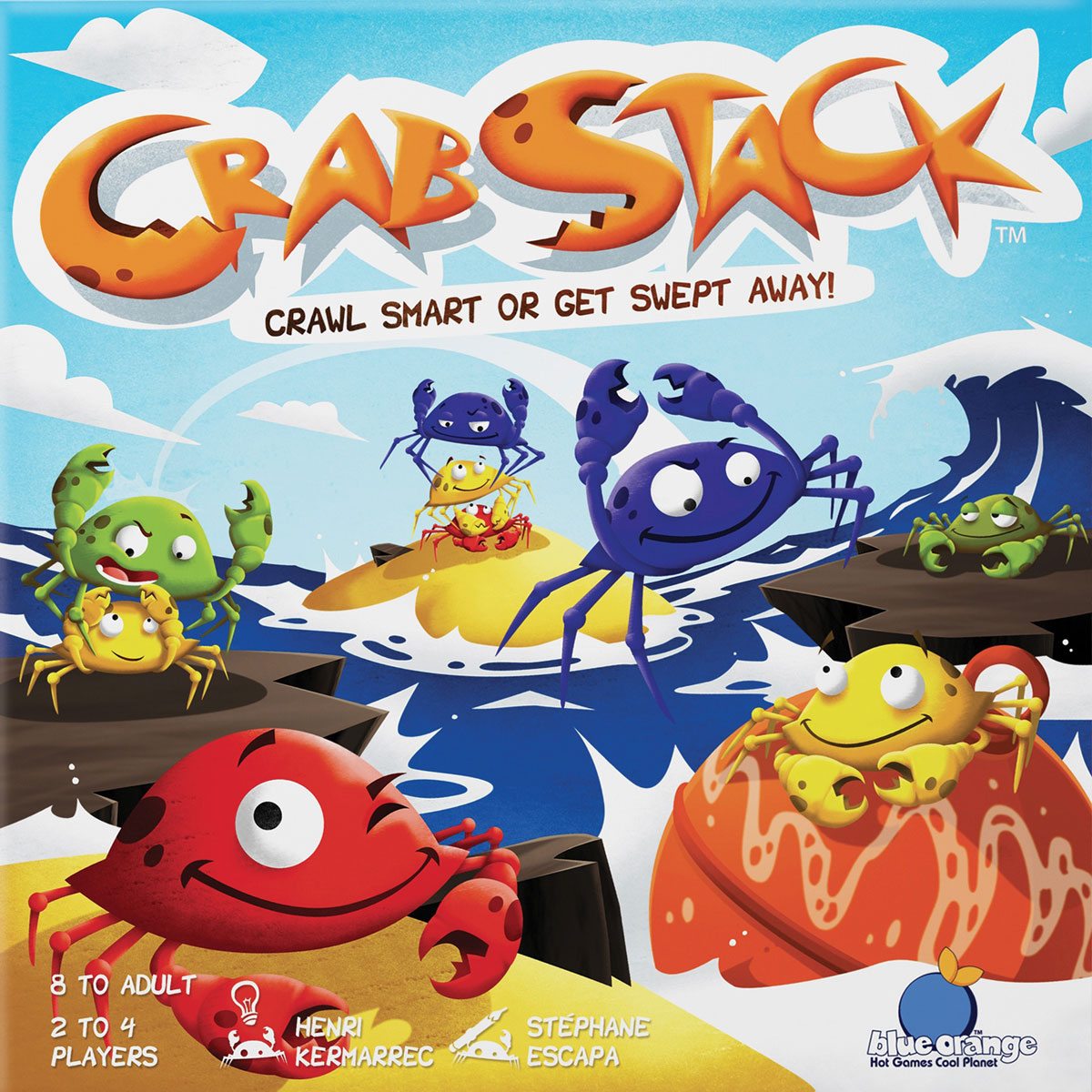 The tide’s coming in, and the crabs are seeking higher ground–or, rather, other crabs to climb on top of. In Crab Stack, you have to stick together or get wiped away by the waves!

At a glance: Crab Stack is for 2 to 4 players, ages 8 and up, and takes about 20 minutes to play. I think the age recommendation is about right–it’s a strategy game, simpler than chess, so younger kids who enjoy strategy games may be able to pick it up, too. It retails for $24.99.

The board is a hex-shaped board that folds down into quarters, with the various spots marked for the crabs (and an empty space at the very center). The spaces are color-coded so you know which spots to use for 2, 3, or 4 players. My only problem with the board was that it didn’t want to unfold all the way at first and was a little stiff–I had to bend it out to get it to sit flat, but was worried about tearing it if I bent it too much.

The crab tokens are wooden disks in three thicknesses. Each player gets 9 crabs, 3 of each thickness. There are little cartoon crabs on each one, illustrated by Stéphane Escapa, and they’re cute. There’s a few of each pose so you get a little variety, though the game would have worked just as well with blank wooden bits. The pieces are also marked with little stars, indicating how many steps the crabs move.

The box is a medium-sized square box, and holds the pieces just fine. Since the hex board folds into quarters, I think the box could have been a smaller rectangle, but I suppose it wouldn’t have been a standard size. Still, I always prefer more efficient use of space. You can see from the photo that there’s a lot of empty space under and next to the board.

The game also included four plastic baggies for the crab tokens, but since you start by mixing them together, I decided it worked just fine to toss them all in the box.

The goal of the game is to be the last player left. When you can’t make a valid move, you are eliminated from the game–you win if everyone else has been eliminated.

If the crabs are ever separated into two (or more) groups, all but the largest group gets washed away by a wave. The size of the group is determined by how much space it takes up–if there’s a tie, then it’s the number of crab tokens in each group. (Still a tie? Active player gets to pick.)

If you can’t move on your turn, then you are eliminated from the game. (Even if some of your crabs get uncovered later, once you’ve been eliminated you don’t get to come back into the game.) The last player to make a valid move wins the game.

Blue Orange Games is known for its kid-friendly games, including many that are appropriate for very young children. They do have games that require some strategy, but most of the games are light to medium strategy. Now, though, they’re branching out. They announced their new Europe Collection at Toy Fair earlier this year, with a line of games that have more appeal to experienced gamers than their current collection. These games are starting to hit stores now, and I’ve got a few of them to try out.

Crab Stack is probably still a medium-weight strategy game, not too heavy, and the rules are simple enough that you can still play with your kids. There is some luck involved in the initial setup of the board, but from there it’s totally based on the choices that the players make.

I like that the rules are very easy to learn (the rules are a single sheet, front and back), but there’s enough depth to the game to keep even adults interested. Despite the crabs, I would still categorize this as an abstract strategy game, so it will appeal most to players who enjoy that sort of strategy game, moving pieces and thinking ahead about opponents’ moves. But it’s simpler than chess, so players who don’t want to plan that far in advance can still compete to some extent.

Since you’re not allowed to step on empty spaces, it means that the available board gets smaller and smaller nearly on each turn. That’s a good thing for folks who suffer from analysis paralysis, because as the game progresses, you generally have fewer options, and it prevents you from getting bogged down. However, it also means that sometimes you’ll be left with only one option to move on your turn.

Player elimination is never a favorite mechanic for me, but since the game plays quickly, I didn’t find it intolerable in Crab Stack. Generally players start getting eliminated around the same time as each other, so if you’re out of the game you won’t have to wait too long before the game is over.

The “wave” rule is pretty interesting, because it allows for big sweeping change rather than just pinning one player at a time. If you have a crab located at a crucial juncture, you can wipe out nearly half of the crabs in one move, which is really effective if your crabs are in the surviving section.

The strategy in Crab Stack doesn’t seem incredibly deep, but it’s not immediately obvious what the best moves are, and since the placement is random, the game isn’t the same each time. However, the random placement also means that some players will have an advantage simply based on the starting positions. I think an easy way to make the game even more strategic (but longer) for more experienced players would be to take turns putting the crabs onto the board at the beginning, and then starting to crawl around after all the crabs are placed.

Overall, Crab Stack is a nice entry-level strategy game from Blue Orange Games, and while it may not be as hefty compared to your Euro-games, I think it’s a nice strategy-based option for you to play with your kids (or for them to play with each other). Look for it at your local game store, or order from Amazon. 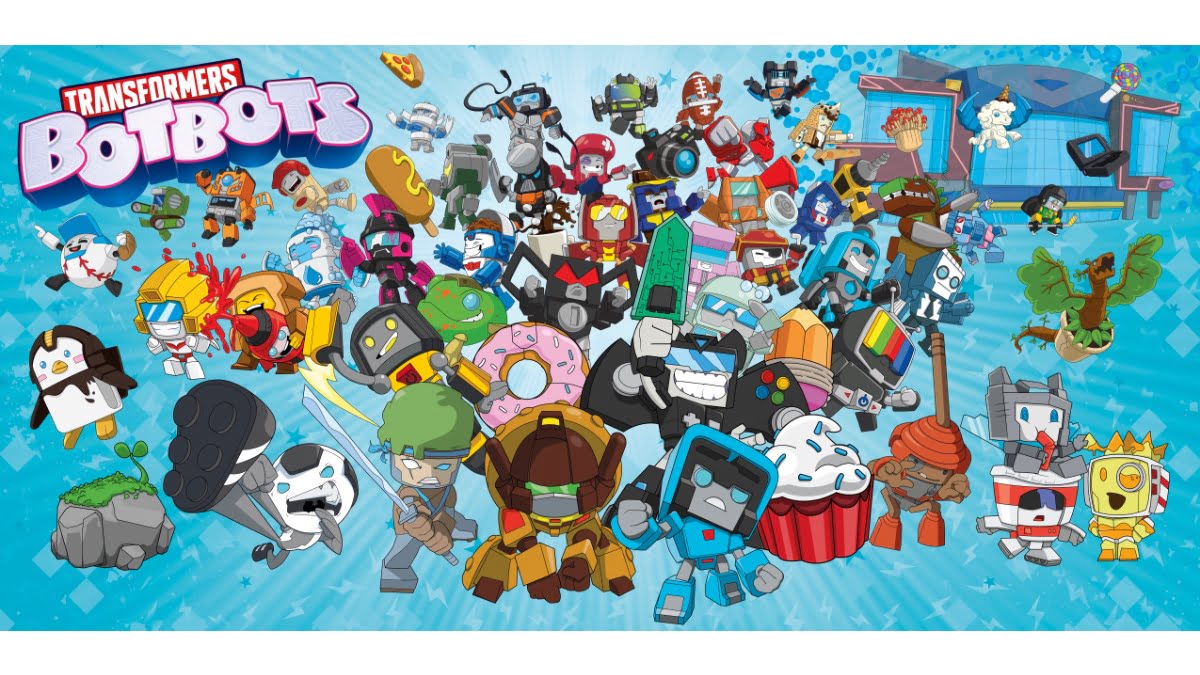 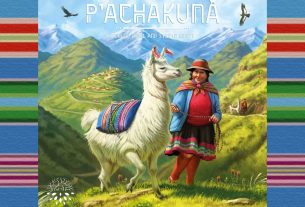