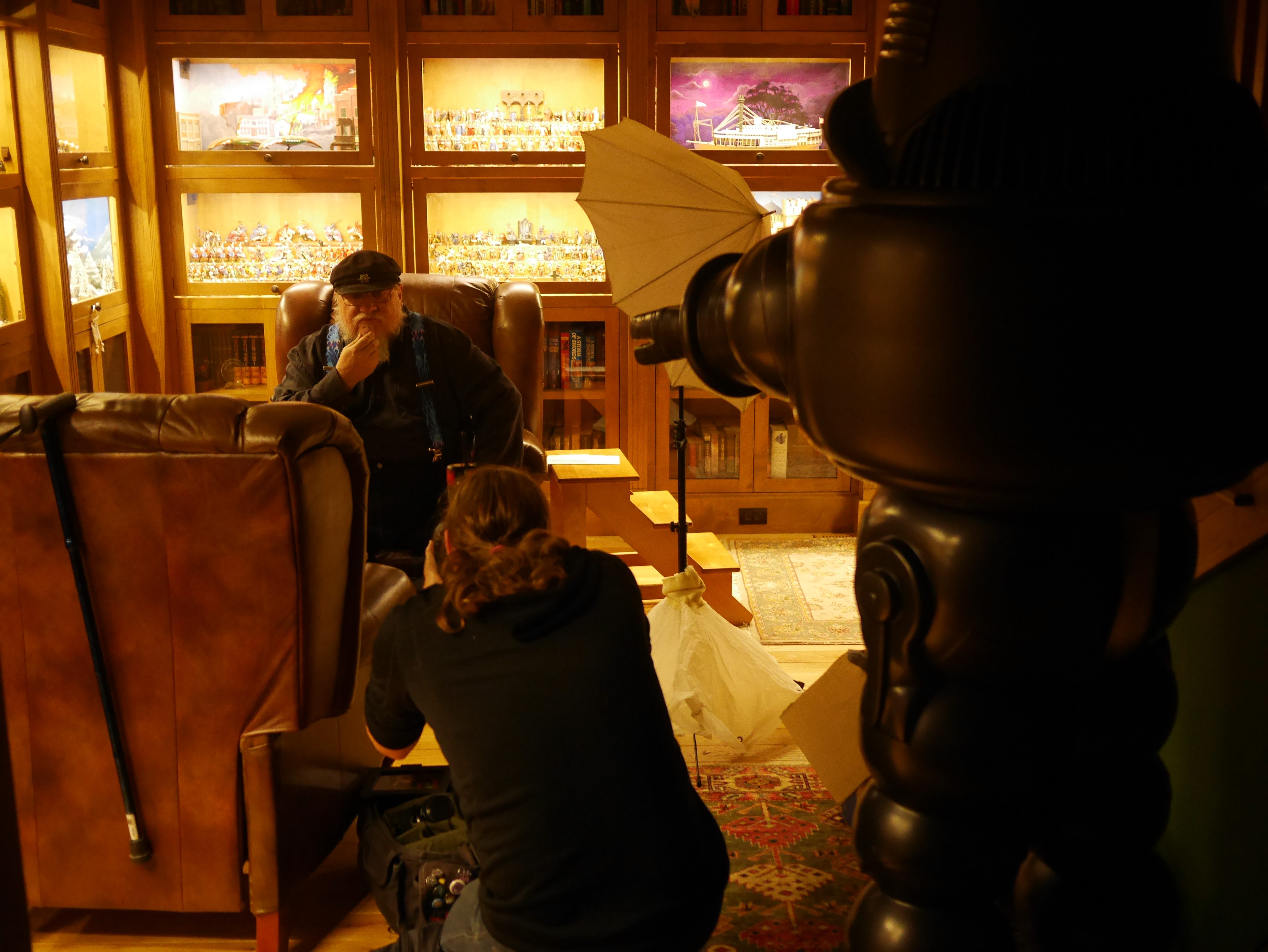 Currently hanging out around the top 50 most popular knitting books on Amazon, Geek Knits features actors, authors, and celebrities from across the geek pantheon. (Yes, I went there. Hush.)

We love behind-the-scenes exclusives at GeekMom, and Kyle and Joan were happy to oblige with the following stories.

Plus, know what makes exclusives even better? The wonderful folks at St. Martins’ Press do: a giveaway. You’ll find your own chance to win a copy of Geek Knits: Over 30 Projects for Fantasy Fanatics, Science Fiction Fiends, and Knitting Nerds at the bottom of this post.

Geek Knits Behind the Scenes 1: George R.R. Martin – From Kyle Cassidy
“Fun fact: I spent nearly a week in George R. R. Martin’s guest house, waiting to take the photo for Geek Knits of George and the knitted Dire Wolf. George would stick his head in and ask if anybody wanted to go out for tacos (and of course, I’d say yes). Then he’d say he felt like writing and I wasn’t about to be the guy on the internet who told George R. R. Martin to not write, so I read books and took photos of rollergirls out in the desert and went running and I’d check back periodically and he’d invite me to dinner and I’d go and then it would be late and everybody would go to bed. One day, he suggested we go to a movie at his theater. It was a South Korean western called The Good, the Bad, and the Weird—a bunch of the authors from Wild Cards were there. Finally, one evening his assistant called and said, ‘Can you do it now before the football game?’ and I raced over and did the photos in his office in about 15 minutes. He was loads of fun to be around and I had a great time hanging out there.”

Geek Knits Behind the Scenes 2: Adam Savage – From Kyle Cassidy
(Or how Kyle ran a marathon, set up the perfect shot, and hung out with stormtroopers and a shark.)

“The shot of Adam Savage with the dragon is probably my favorite one in the book. It wasn’t difficult to set up, but it was still the most difficult.

I’d been planning on taking a weekend of vacation, meaning that I’d fly from Philadelphia to Chicago, run a half marathon with Peter Sagal, do his photo for Geek Knits, then jump on a plane and come back to Philly the next day. That’s ‘vacation’ in my mind. Joan called and said that Adam Savage from Mythbusters was available for a photo shoot, but only in the middle of my vacation (after I ran the race, but before I came home) and could I go from Chicago to California and then back to Philly instead of sleeping after the race?

I had my photo gear, but no props and nothing in mind for Adam’s shoot. I didn’t even know where it was going to be. It turned out to be backstage at a concert hall—Adam was doing a performance and I had the run of the backstage area to figure something out and when Adam came off stage, we could do the photo.

I wanted to do something in the Mythbusters tradition, meaning some sort of construction and Adam was modeling a dragon. What would Adam do with a dragon? Melt something? Fire, there should probably be fire. Joan’s husband, (Dill Hero) was totally on board with the idea of setting something on fire in the theater. Somehow cooler heads prevailed and the fire idea was nixed. Maybe Adam would set a trap for a dragon and catch it. So Dill and I started scouring the backstage looking for things to make a Rube Goldberg trap out of and a place to set it up.

This is our proof of concept.

What remains is how to light it. Here’s one light behind an umbrella. It lights everything up. Nice maybe, but not dramatic enough for a dragon.

I went with two lights, a soft box above the dragon , and a second light straight on the trapper. The dragon is being lured into the trap with a little pile of gold coins. Because that’s how you catch a dragon. Photo geekery: Because I was ostensibly ‘on vacation’ and thought I was only taking one photo of Peter Sagal, I packed a small camera kit consisting of a Panasonic Lumix GX7 and a 20mm f 1.7 lens. The Lumix is very small and very capable and it’s become a go-to for a lot of my work that involves traveling. I had two flashes triggered by Pocket Wizard radio flash triggers. I also brought one light stand and the umbrella was a Photek Softlighter II, which converts into a soft box, a shoot through, or a reflective umbrella. It’s very useful. The umbrella and the light stand both fit in my suitcase; everything else in a small camera bag.

That looks appropriately dramatic! So we waited for Adam, he came off stage, I did like four photos, which was kind of pointless because we nailed it on the first one. I love how the dragon looks happily and innocently inquisitive and Adam looks delightedly triumphant—his trap is working! Click! And now with my job done, I could go lay down in a hotel and sleep for five hours before my red-eye back to philly! Glorious sleep!

Then Adam said: ‘Do you want to come back to my place and hang out for a while?’

Wot wot?! Anyone who says ‘no’ to that does not deserve to be working on a book called Geek Knits.

So we went. You can see in this selfie, I’m still wearing my running shirt from the half marathon.

Adam has a shark. He found it in a dumpster and brought it home and hung it up by himself. Because when he’s not building things on Mythbusters, he’s building things. He’s the least lazy person I’ve ever met in my life. So I figured, ‘suck it up and sleep some other time.’ And we went on into the evening. Adam showed us the most powerful flashlight ever invented, the prop gun from The Bourne Identity, we had tacos. I got on an airplane at midnight and flew back to Philadelphia. The plane landed and I went off to the next thing, still in two-day-old clothes without unpacking my bags. Tired didn’t mean anything, so much had happened. We made great stuff, we had an adventure; that’s all I really remember.”

Joan adds: “The dragon was designed by Noel Margaret (www.noelmargaret.com). I asked several designers about making a plush dragon and Noel nailed it, hands down. I love how the texture makes it look like the dragon has scales! Instead of doing the obvious green, she wanted to do a bright red, which I was absolutely on board with. It came out so cute and cuddly instead of creepy or scary!

Also Adam not only had The Bourne Identity gun, he had the red bag and trash can! (Bourne Identity is one of those movies that I can watch once a week and never get tired of it. I was having a major geek out!)

It’s really, really hard for me to pick a favorite photo from Geek Knits, but this one is up there! I was so paranoid about it getting in since it’s um, sideways. (Kyle what’s the fancy photo term for sideways???) Most photos in knitting books are vertical. As soon as I turned these photos in to the publisher I was like, ‘This photo. This photo has to be in the book!’

As it turned out, I didn’t need to worry. The publisher and art department saw that photo and were instantly in love with it!”

Thanks so much to Joan of Dark and Kyle Cassidy for providing behind-the-scenes stories from Geek Knits, as well as great tips on how best to light a dinosaur trap for posterity!

Even better, the fabulous folks from St. Martin’s Press have authorized GeekMom to do a giveaway. Sign up on our rafflecopter for your chance to win your very own copy of Geek Knits: Over 30 Projects for Fantasy Fanatics, Science Fiction Fiends, and Knitting Nerds.

Star Trek: The Next Generation Remastered And Finally Arriving Jan. 2012