This Saturday, May 2, is a hallowed day amongst comic geeks: the 13th Annual Free Comic Book Day (or FCBD for short). If you’re curious what it’s about or nervous about bringing your kids to your Local Friendly Comic Book Store, then read on for a few tips and tricks to prepare yourself and your progeny for Saturday!

Is it really free?

100%, without a doubt, Free Comic Book Day is exactly that–a day for free comics for everyone who shows up.

Great! So I can take whatever I want? 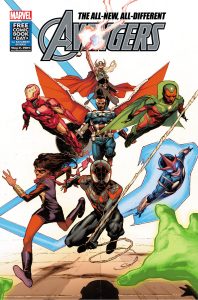 Woah! Not so fast Mr. Grabby-Toddler-Hands. Retailers actually buy FCBD packages that contain featured titles and special issues that were created just for the event. Some of these are reprints of popular titles, some are special stories written just for the event, some are collections of page previews or information about their particular comic universe. This is the publisher’s chance to grab new eyeballs, and everyone has different methods of doing that. Rest assured, you will walk away with some Grade-A quality comic book entertainment.

Yup. But you’ll note what I mentioned in the previous answer? It’s free for you, not so much for retailers. To that end, it’s always nice to grab an extra comic or two from the regular racks and buy something on your way out.

I knew there was a catch!

That’s not a question. And it’s not really a catch, it’s just a nice thing to do. The great thing about FCBD, especially at local stores, is that it’s one of their biggest attendance days all year, and they usually have great sales going on. So not only can you get free comics, you can get cheap comics too!

Is the event kid-friendly?

It very much depends on the culture at your local comic book store. Here in Sarasota, Dark Side Comics does an awesome job of making it a very inclusive event. A regiment from the 501st comes out in various Star Wars costumes, and last year we had several Bat-villain cosplayers wandering through the store. (My daughter was nuts over the Poison Ivy that showed up, she spent the rest of the day trying to make a costume.) This year there’s a group of Mandalorians, R2-D2, Captain America, the Batmobile, and more! Staff are usually happy to answer questions and, at least in my neck of the woods, there’s always lots of other kids there. If your local shop isn’t doing a FCBD event, or you don’t feel comfortable taking your kids there, check to see if a branch of your local public library will be participating; many often do. 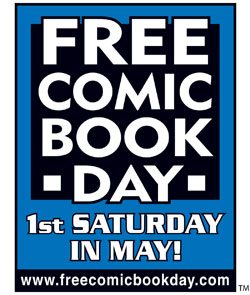 Great! When should I get there?

Honestly, I usually get there an hour before they open. The “free” moniker tends to draw big crowds, and supplies are limited to whatever your store bought to pass out. Luckily for us, those aforementioned cosplayers spend their time working the line, and it’s always fun to know you’re in a group where a spontaneous “Who would win in a fight? Batman or Superman?” debate can break out. Feel free to let your geek flag fly, you are among your people.

So when I get inside… is it everyone for themselves or…?

My shop does a line. Others have bundles that they hand out per person or family. Either way, you’ll get a mess of comics, which brings me to one last question…

Are the titles kid-friendly? 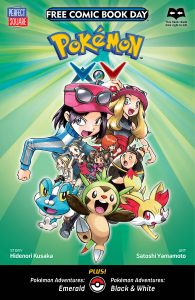 Yes and no. It depends on the publisher; it depends on the kids. Some comics, it will be obvious by the cover whether or not it’s OK for your kids (like, unless your kid has a phobia of giant electric mouse-thingies, you know Pokemon will be safe). Others look alright, but don’t quite match the cover (or have stories from other, less-age appropriate titles inside). Best thing to do is read them with your kids or give them all a quick thumb-through before handing them over. I’ve compiled a quick list of those titles that you might want to pull from the stack or review carefully to make sure they’re not too intense for your younger readers: 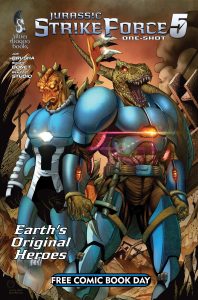 And that’s it! Mordechai Luchins and Corrina Lawson will have reviews of this year’s batch of FCBD titles this weekend (I’m particularly curious about Jurassic Force 5, which looks like a pretty awesome dinosaur/80s action cartoon mashup).

Looking for more tips before you go? GeekMom.com has a fantastic collection of survival tips. You should go check out the article anyway to catch Dakster Sullivan’s Batgirl of Burnside costume. It’s pretty righteous.