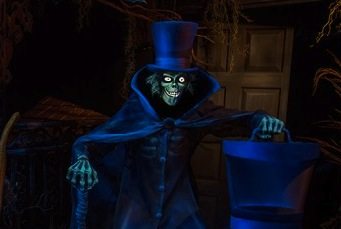 One of Disneyland Park’s most mysterious residents returned home this month, as part of park’s 2015 Diamond Celebration.

On the weekend of May 9, the newly re-imagined Hatbox Ghost was installed in the attic of the Haunted Mansion, appearing just before guests’ DoomBuggies make the backward descent into the ride’s raucous graveyard.

Dressed in full Victorian cloak and top hat, like a non-lethal Jack the Ripper, the grim grinning figure leers menacingly at guests as his head disappears from his shoulders and into the large transparent hatbox in his outstretched hand. The head then disappears from the box back onto his shoulders.

That’s pretty much all there is to him; the concoction of a basic lighting effect that didn’t seem to work the first time… and we Haunted Mansion fans just love him!

“The Hatbox Ghost was one of the original 999 Happy Haunts in the mansion,” Shaver-Moskowitz said in the podcast. “Sometime around the opening, he disappeared and has been missing from the mansion for the past 45 years.”

Shaver-Moskowitz noted this ghost is one of the mansion’s most popular figures ever, and it didn’t even exist there… at least not since the attraction’s opening in 1969.

This means, no one my age or younger had ever even seen this ghost in person until this month. The majority of Disney visitors older than myself have never even seen the original ghost, although many have claimed to have “sighted” him that first year. There is only one video I know of, released on the fan site Disney History Institute (unaffiliated with the Walt Disney Company), that even proves this original ghost appeared in the ride at all. No one seems to even know where he went.

I find myself among those admirers of the Hatbox Ghost. He has made his way into my Haunted Mansion decorations, many of which are displayed year-round, plastered on my file cabinets with homemade magnets and clippings, living among my Halloween models, and hidden in the images of our New Orleans-themed guest bathroom (if you know where to find him).

It is as if I know him as well as any of the other Haunted Mansion ghost visitors that I’ve seen again and again.

I’m not the only one. This ghost has had his own fan page on Facebook, and director and author Guillermo del Toro wanted to use him as the focus on a motion picture based on the attraction. Whether that film ever sees the flickering light of the silver screen remains a mystery in itself. The fan artists and cosplayers love him, as well. One of my favorites is a portrait by pop culture artist Chris Mason.

The marketing geniuses at Disney have done their best to keep this ghost in people’s minds, whether or not he has been in the park for more than four decades. He’s been featured in postcards, T-shirts, books, as the mascot for a past “Haunted Holidays” campaign where he talked about haunted sites around the world, pin-trading events, and as a costumed character. Families can even download their own Hatbox Ghost paper model from the Disney Family site.

The Hatbox Ghost’s return is such a little thing in the grand scheme of the park—practically no changes were needed to add him to the attraction. However, his presence is so significant to Haunted Mansion lovers, as he is the amalgam of the original, old-school classic design from Imagineers like Yale Gracey and Marc Davis, and today’s advancements in animatronics and computer animation.

He’s elegant and graceful. He’s eerie. He’s relatively simple in concept, but apparently complex in design. He’s classic. He’s humorous and weirdly friendly. Most of all, however, he’s very, very, Disney. I’m not talking about the overly tech-savvy, yet nonetheless impressive, Disney style of today. The Hatbox Ghost is the picture of early-stage Disney Imagineering at its finest.

I think it’s appropriate the Haunted Mansion in Disneyland Park is in New Orleans Square, because there’s a word of French and Spanish origins often associated with the spirit of the city: lagniappe, or “a little something extra.”

The Haunted Mansion is filled with these kinds of extras. The wild-eyed faces in the hallway wallpaper, the dueling gunmen portraits in the ballroom, the one broken singing bust head, and the seductively creepy nose wrinkle of the “Little Leota” farewell bride. All of these little “lagniappes” add to the ride, and are as good effects, if not better, than the Hatbox Ghost’s little head trick.

So why is the Hatbox Ghost so popular? I think people love a good mystery, a good reason for speculation, and “where is he now” conspiracy theories.

For me, the Hatbox Ghost represents my own growing up with the mansion. Never mind the fact the ghost and I are the same age—I think I look considerably younger, though—the Haunted Mansion is one of my favorite attractions, second only to Pirates of the Caribbean. This ride also scared me so much my first time on it, I never even made it past the stretching room. It was 1973 or 74 and I was just a toddler. The rules were a little more lax then, and I was perched atop my father’s shoulders as we entered the room. While everyone else was huddled safely together, I was exposed and alone over everyone’s head as the walls begin to stretch. I panicked and begin clutching the scalps of random victims. Long story short, they stopped the stretching room elevator and let us out.

The next year, I muscled up some courage and made my way through the ride, looking through a cage of my own fingers. The year after that, however, I started seeing the imagination behind each ghost and haunted hallway, and I fell in love with the ride. So much so, my youngest daughter’s first venture on the ride last year was, “I want to go again!”

This summer, there is just one more reason for riders to “go again,” and I’m sure many will make a few repeat runs through the ride just to see the ghost’s head grimacing up from his hatbox.

I predict the glamour around the ghost will settle now that he is back home, and he will become just another familiar favorite for most guests. For those in on the folklore, however, he’ll be that special “something extra.” He’ll be that mystery that still isn’t quite solved.

After all, that original ghost model has to be out there somewhere, doesn’t it? The logical explanation is the ghost just wasn’t working properly, and it was eventually scrapped for parts.

That’s both sad and not particularly fun. I like to think he’s still out there somewhere, perhaps roaming from attic to attic, looking for a suitable home. Judging from the flood of YouTube posts excited about seeing the new ghost, there are plenty of folk willing to take him in.

First They Came For The Firefly Poster 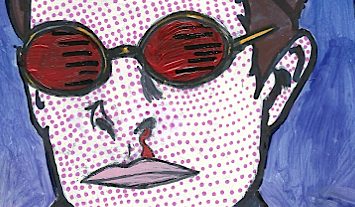 Be the Artist: Roy Lichtenstein 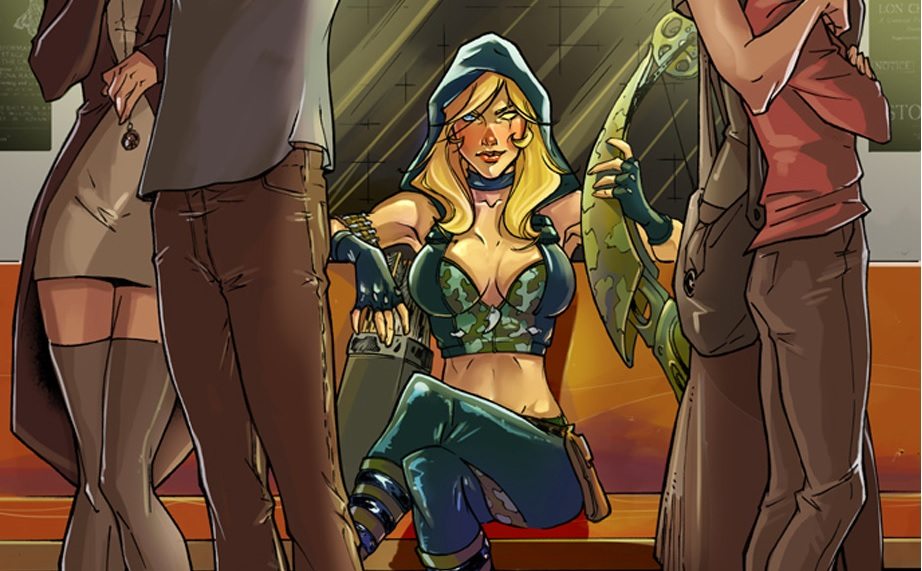