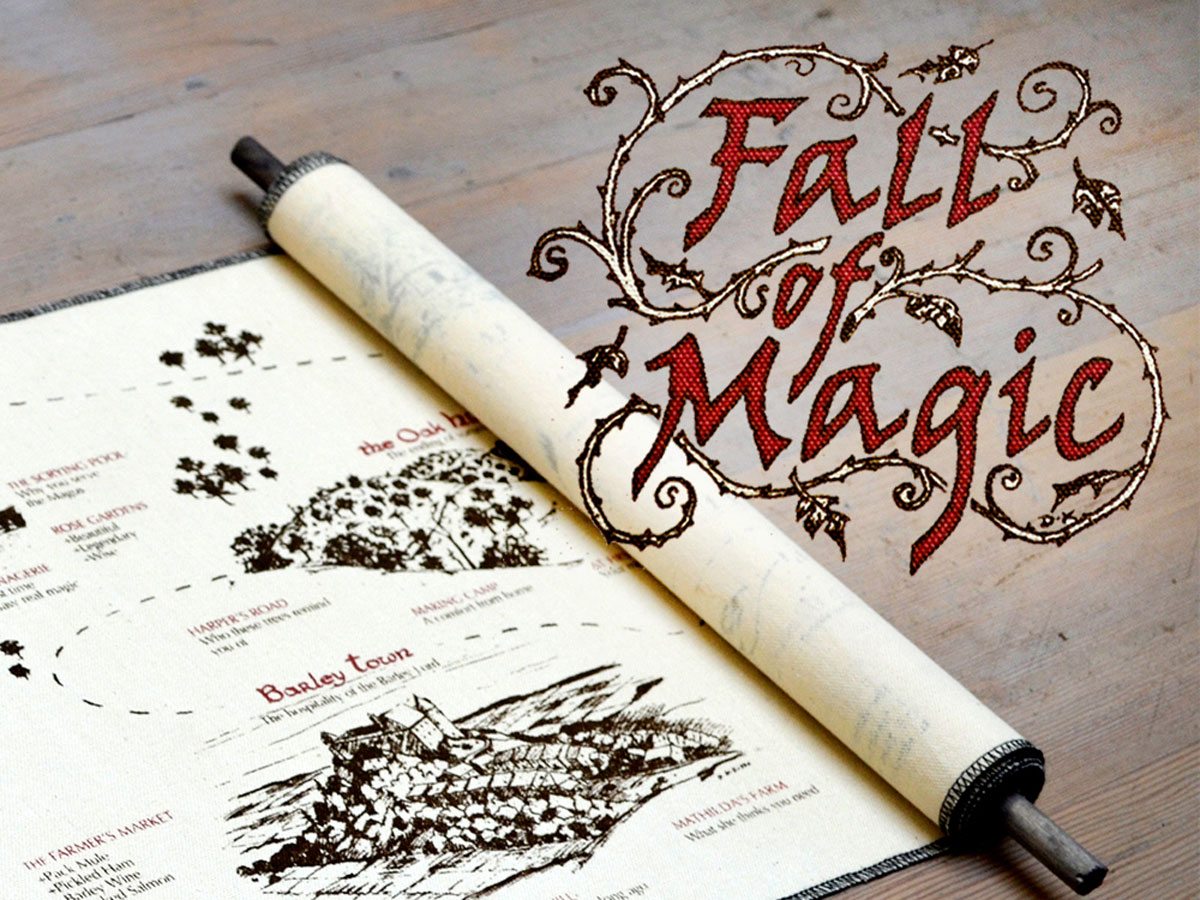 Our family really enjoys great storytelling games. Fall of Magic not only has a novel and beautiful game mechanic but also brings a fresh yet familiar fantasy setting and theme to the storytelling genre that we thoroughly enjoyed.

I was given access to the beta print and play version of the game so I can’t comment directly on the final quality of the game. That being said, the final components include a beautiful screen printed scroll that is over five feet long, a single six-sided die, the instructions for the game, and five coin markers made by Campaign Coins all in a nice solid full color box. 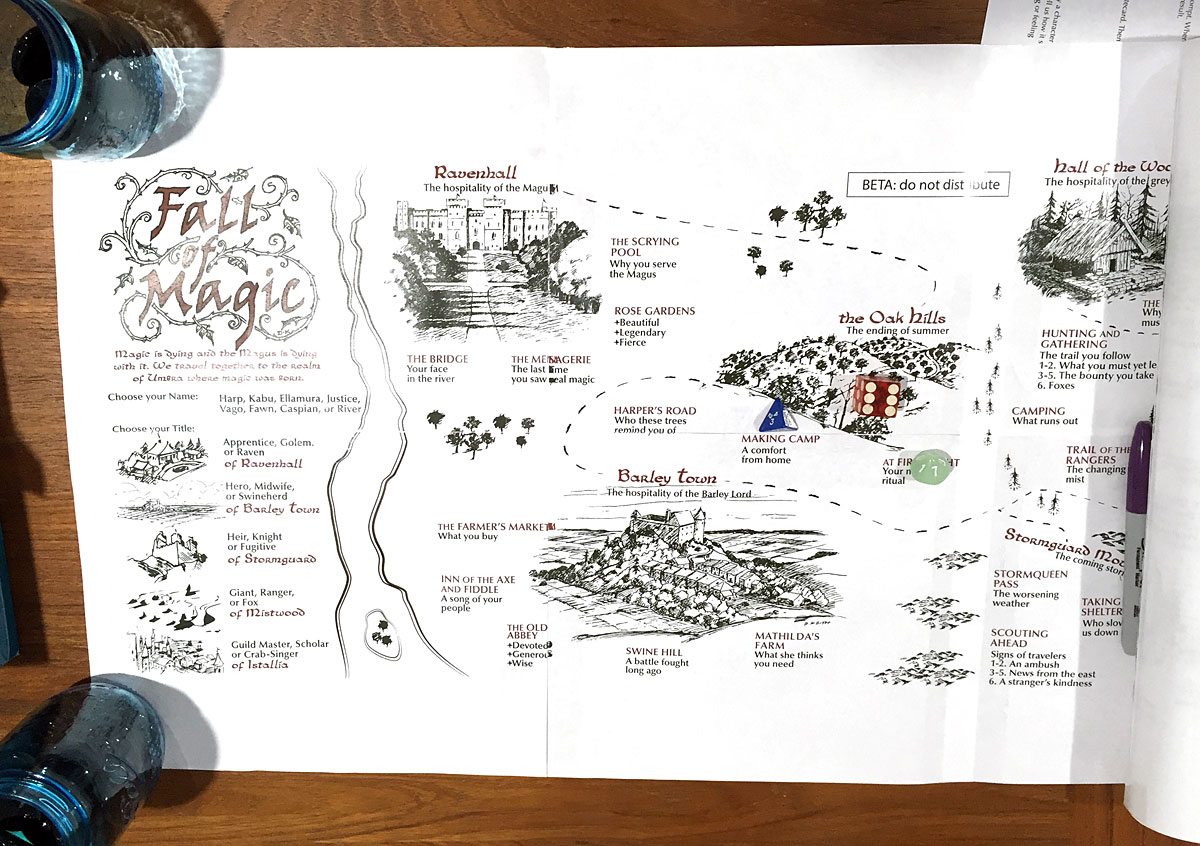 The only things you need to play the game in addition to what’s included are note cards to be used as character sheets and something to write with. If you’re going the print and play route, you’ll also need a six-sided die and markers for each player and one for the Magus. I opted to print the map full-sized and then cut and tape it together to get the full effect of the scroll. I can definitely see someone using some parchment-like paper and a dowel rod from Lowe’s to make the print and play version feel closer to the full version to save some cost; however, I’m really looking forward to the screenprinted final version. 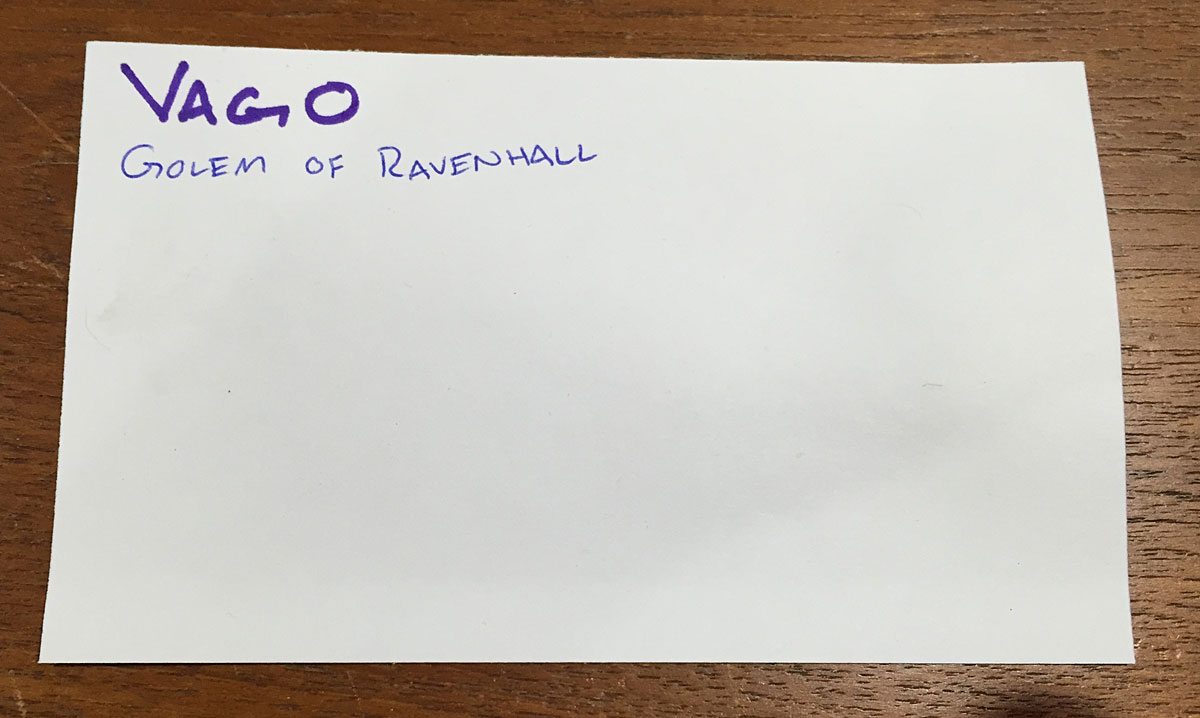 Gameplay is fairly elegant in its simplicity. The game starts by each player choosing a name from the scroll for their character followed by a title and location. These are written on your note card. You are left to fill in the details of what those mean and what your character’s story is as you play the game. I chose Vago, Golem of Ravenhall, and my wife chose Ellamura, Midwife of Barley Town.

Play begins at Ravenhall where the Magus currently resides. The only given story points are that magic and the Magus are dying and that your party is travelling with the Magus to Umbra where magic was born. The initial story prompt is minimal but helps provide a great framework for the storytelling.

The game progresses with players taking turns moving their character to a scene on the scroll. Each scene also has a story prompt. The player describes the scene, ties in the story prompt, and can even include other players in their storytelling, though the owner of the character gets final say over what is true about their character. Characters can only move to scenes at a location the Magus is already at but a player can choose to move the Magus to the next location instead of moving their own character and furthering the story that way.

In addition to just story prompts, some scenes have traits to choose from that you add to your character (by writing it down on your note card) that should impact the storytelling around that character. Other scenes have multiple outcomes that are determined by the die roll. We didn’t encounter a many of either of these because of the choices we made along the way so our character cards were pretty empty. Next time we play, we decided we’d keep notes on our cards for things about our characters that get revealed as we play more to help us remember the story after it has ended than for any other reason.

Before we knew it, we had finished our story and two hours had gone by. We ended up with a great love story about sacrifice and redemption. The Magus sacrificed himself to make his “son,” Vago the Golem, human (I wrote “a real boy” on my character card) which allowed the growing love between Vago and Ellamura to be fully realized. Vago took over as the Magus of Ravenhall, and he and Ellamura were married and returned, along with the magic in the world, to Ravenhall. We already decided that the next time we play, we won’t have a happy ending.

In our two hours, we only went through ten of the fifteen locations (there will be even more in the final game thanks to the stretch goals) and only did half of the scenes on those locations. There are so many replayability opportunities with Fall of Magic with just the two of us, not to mention even more when we invite some friends to join us. Fall of Magic will definitely have a special place on our game shelves and the promised quality of the finished product will make it a show piece for sure.

Diversify Your Wardrobe With a Subscription to Cypress & 5th 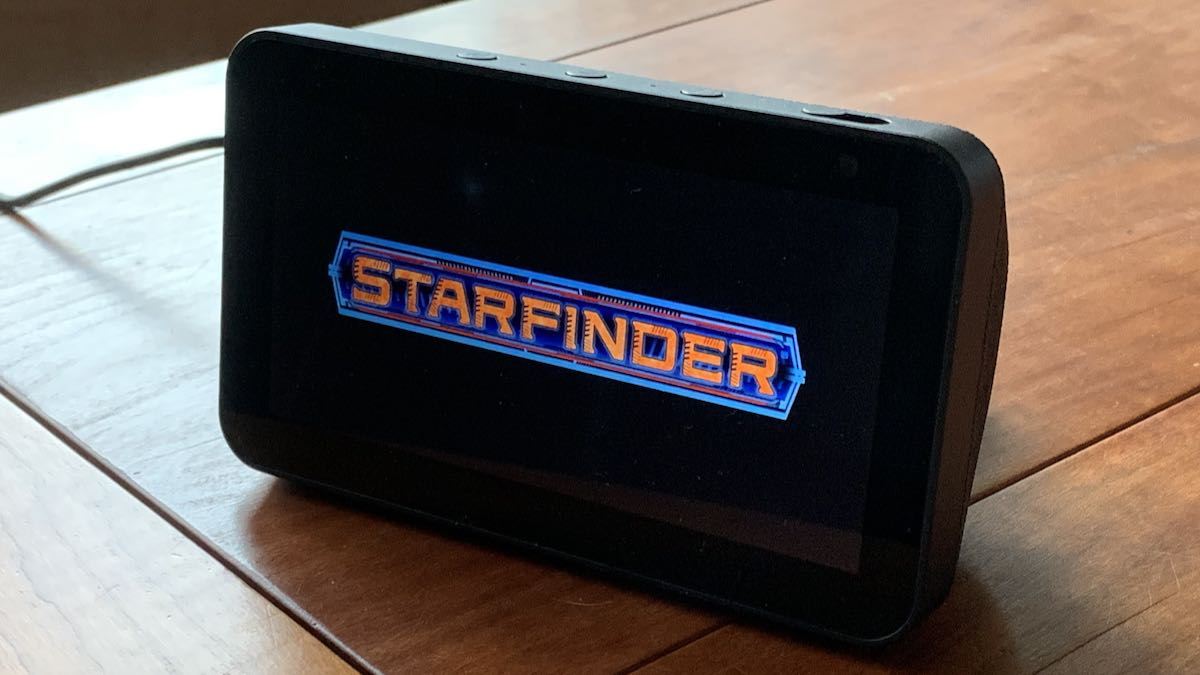