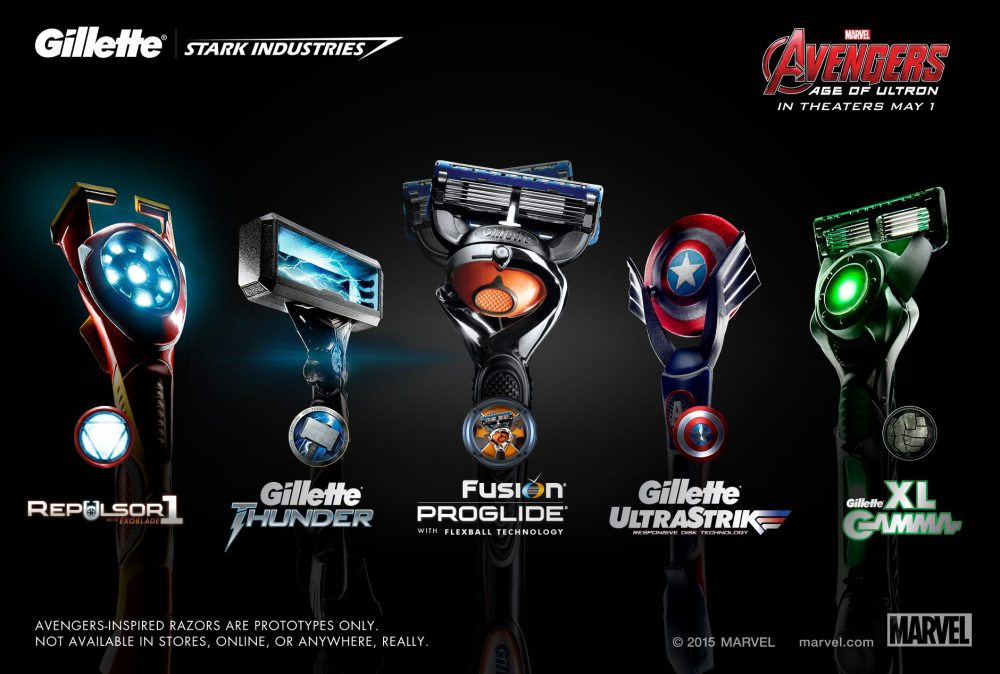 Avengers: Age of Ultron opens nationwide in the U.S. tomorrow, with some theaters showing it tonight as well. It’s an excellent film, with some excellent acting and special effects that will blow you away, as you watch the Avengers try to save the world again. But what about shaving the world? Steve Rogers (Captain America) must use a pretty great razor for that clean-shaven look, and you know that Thor and Tony Stark would use only the best to make their facial hair look just right. And then there’s Bruce Banner, of course, who would definitely need a top-of-the-line razor – consider the potential consequences of him cutting himself shaving!

That being the case, Gillette has teamed up with Stark Industries to develop four special razor prototypes specially designed for those four heroes. I recently had the chance to talk with none other than Stan Lee himself about this partnership, and other topics of interest to fans of Marvel comics and movies. (You’ll notice that Lee mentions the Gillette razors a couple of times, because that campaign is the reason I was able to talk with him; obviously, if someone asks you if you want to talk with Stan Lee, the answer is always “Yes!”) Check out the interview below, and keep reading for a really fun video and, even better, a truly awesome giveaway.

I started by asking him about the new movie.

Lee:
The movie that’s opening up features Iron Man, the Hulk, Captain America, Thor, Hawkeye, Black Widow, and so many of our other characters – they’re all my favorite, because I made up most of them. And the name of the movie, as you know, is Marvel’s Avengers: Age of Ultron, and Ultron is the most deadly and the most dangerous villain they have ever fought. And I tell you, if you like special effects, you will never see as many special effects as there are in this movie. It’s fantastic; it’s a feast for the eyes, if nothing else.

I then asked Lee about the new Marvel TV series on Netflix, in particular the much-acclaimed recently-released Daredevil, and whether we should expect to see him appear in one of his traditional cameos.

Lee:
I haven’t done my Daredevil cameo yet, and [KIDDING] I’m rather upset about that. To think that they would start a show without my cameo! But I’ll be doing one sooner or later. See, one of the problems [is that] very often they’ll shoot a show or a movie, and it’s in another part of the world, and I don’t have time to get there. So I have to wait until later on, when either they can come closer, or I have some reason to go to that area. I once missed an X-Men movie because they shot it in England, and I was too busy to go there at the time. And I’m heartbroken about that. But I didn’t miss Marvel’s Avengers: Age of Ultron – if you blinked your eyes you’d miss my cameo, but it was there. Everybody’s talking about how great the movie is – that is, the people that aren’t talking about how great the Gillette Razor with Fusion ProGlide with FlexBall technology is.

GeekDad:
I was wondering what your opinions were on the current transition of comic books into the digital realm.
Lee:
Digital comic books? Well, it was logical that they’d have them. The young people have become so advanced, so technology-minded; I mean, everybody has a little cell phone now that can take pictures, and they can send messages. And just to see regular drawings on a computer screen seems to be not exciting enough for kids, but if those drawings can move and become digital pictures – I think I myself would feel “Hey, that’s a lot more fun; that’s closer to a movie.”

I followed that up by asking him where he saw the future of physical comic books going.

Lee:
Well, I think [that] in 50 years comics will be mostly digital, and the books themselves will be like the writing on caves of primitive man. Because young people now want to see things move. They’re spoiled; they’ve got these great television shows and movies and digital comics, and it’ll be tough for them to go back to just regular stories. But that’s advancement, that’s science – like Fusion ProGlide with FlexBall technology [from] Gillette Razors. Things advance, and everybody loves these scientific advances.

And now, the giveaway…

Enter the giveaway using the form below, by noon EDT on Monday, May 4, 2015. One (1) winner will receive a Grand Prize which includes 1 set of Gillette/Avengers-inspired prototype collectibles; 1 Avengers Comic Book; and 1 Gillette Fusion ProGlide with Flexball Technology Razor. Approximate retail Value of Grand Prize: $275. Winner is responsible for all federal, state and local taxes and any unspecified expenses on Grand Prize.

(You can also go to Comics Alliance to enter to win a set of these prototypes signed by Stan Lee. Please note that the set being given away here on GeekDad is not signed.)

Editor’s Note: This post brought to you by Gillette, who also gave me a set of the prototypes. 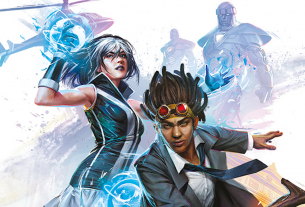