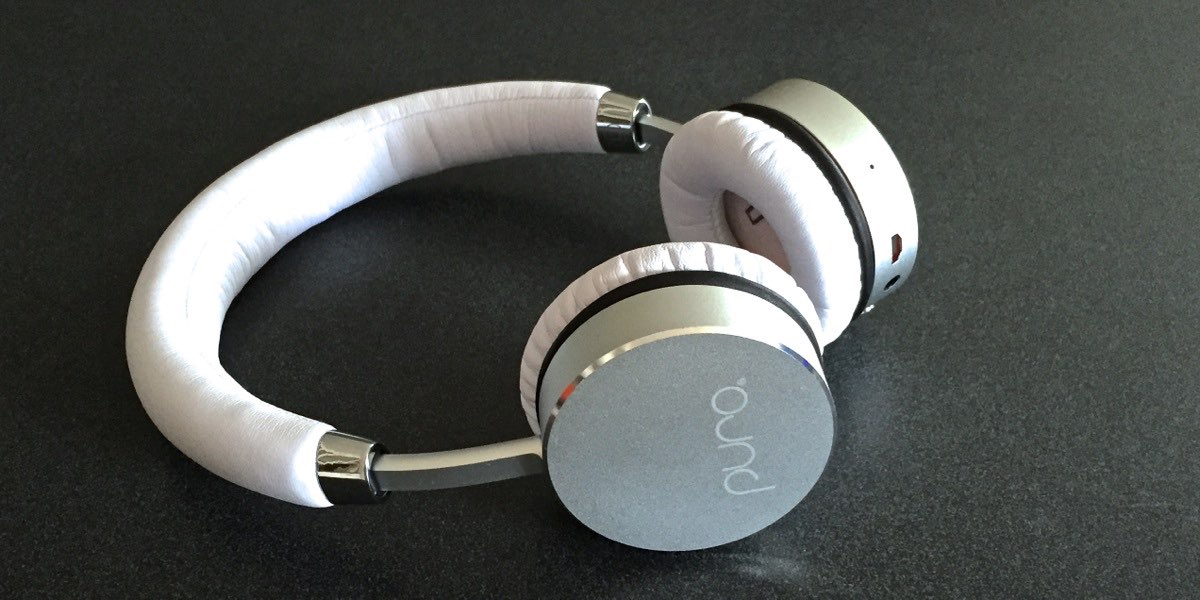 I have two running battles with my music-loving teenage daughter. The first is her ability to destroy headphones. She has chewed through a half-dozen sets of ear buds and headphones in the past year alone. The primary point of failure in all cases has been the cable connecting the headphones to her iPhone, which tends to snap after being hopelessly tangled. The second issue — and one that I’m sure all parents have some concerns about — is volume. She plays that music loud and I have concerns about hearing damage. Puro Sound Labs sent a pair of new studio grade Bluetooth wireless headphones aimed at kids and they do an admirable job of solving both of my issues. Unlike many headphones aimed at kids, these look good and sound even better.

Volume Limiting Ear Protection
Puro Sound Labs isn’t just arbitrarily capping the volume on the BT2200s, the company employs DSP-based volume limiting. The electronics actively monitor volume levels and a limiter prevents the headphones from exceeding 85 dBA. The process is indistinguishable — I could not tell when it kicked in — and does not impact sound quality.

The headphones’ high quality ear cushions are designed to block external noise, making the most of that 85 dBA. Puro Sound Labs clearly takes this issue seriously and has committed to donating a portion of each sale in 2015 to the Hearing Health Foundation.

Most mobile devices have sound-limiting capability via parental controls. I prefer having this functionality built-in to the headphones. It can’t be defeated, it’s less in your face, it moves between devices with the headphones and it works with teenagers — who may be beyond the parental control phase.

Quality Construction
Most headphones marketed at kids use a lot of plastic in their construction. They look cheap and they don’t last.

One of the things that impressed me about the BT2200s before I even tried them on was the premium look. The ear cups and head band are made of aluminum, while the ear cushion and band cover are leather (silver with white on the test unit, also available in a gold and tan combo). They are lightweight and look much more like “Serious” headphones than something aimed at kids. My wife and daughter found them comfortable to wear, although I apparently have a bigger head than the target demographic — the headband was a bit too small for me to wear these without resorting to slipping the band to the back of my head.

Sound
The real test of any headphones is how they sound, and the Puro BT2200s performed very well, especially when you consider the fact that they are designed for kids and priced at under $80.

The BT2200s employ what the company calls the “Puro Balanced Response sound curve.”

What that translated to was sound quality that far exceeded my expectations. Bass was solid but not sloppy or overwhelming, the midrange was good and the highs were bright without being tinny. There was no sense of the sound being muffled as it often is with less expensive headphones.

In one intensive listening session, I compared the Puro BT2200 headphones against a pair from my own collection with comparable specs. The wired JBL Reference 410s also have 40 mm drivers, but they have a higher frequency response (12Hz – 28kHz) and roughly double the price of the Puros back when I bought them. Not really a fair fight, but they were the closest match I had on hand.

The Puro BT2200s held their own admirably. The JBLs had just a little more bass punch and were slightly brighter, but it was pretty close. Even on a song like the Psychedelic Furs’ “Forever Now,” with its wall-of-sound onslaught that overwhelms lesser headphones, the Puros held their own and showed no sign of distortion.

The primary difference between the two headphones was volume.

The JBLs could be cranked up a lot louder. I have probably killed my ears after years of listening to music “turned to 11,” covering concerts and generally not paying attention to audio health. So I frequently found myself with the Puro headphones close to their maximum volume (of course the fact that I wasn’t able to get a good seal on the ear cups didn’t help there). But I still had room to turn it up just a notch more if I wanted to.

For my wife and my daughter, they were plenty loud enough without pushing them to the limit.

The battery is rated at 18 hours and we found that to be accurate. Puro includes an audio cable and a jack in one ear cup, so if you run out of battery power, you can plug in and continue listening.

There wasn’t much in the way of downside with the Puros. The volume buttons on the headset take some getting used to, but that’s the case with any wireless headphones (and besides, you can use the volume control on the music source). The white leather on the review unit isn’t particularly kid-friendly and could easily get soiled — a gold and tan option is offered, which would probably be better, but it would also be nice to see something colorful like red or blue, given that the target demographic is kids. You may want to buy a protective carrying case ($19.99 for one from Puro) as this accessory is not included.

If you want a pair of wireless headphones for the kid who gets tangled in wires or likes the music a little too loud, I highly recommend the Puro BT2200 Wireless Headphones. The appeal isn’t limited to the younger set either — my wife loves these. Their premium look, durable construction and high quality sound is well worth the $79.99 selling price. In fact, I just checked the Puro website and noticed they have a 15% off promo code (at time of writing), that brings the price below $70 which is a bargain.

Disclosure: Puro Sound Labs supplied a pair of BT2200 headphones for this review. However, I liked these so much that I bought a second pair…

2 thoughts on “Puro BT2200: The Wireless Headphones You Want for Kids”